The Texas Tone King Eric Johnson is currently touring through North America on his “Classics Present and Past Tour.” Having just seen the stop in Denver last Saturday, I can confidently say this run should be renamed the “Look What’s Possible in Music” tour.

That’s not only due to the jaw-dropping acrobatics he performs on the frets of his Fender signature Stat—(upon hearing “The Cliffs of Dover” as a kid, Joe Bonamassa once remarked, “I’ll never be this good.”)—but because of the entire diverse and unique approach he takes to music in general.

There’s no doubt the man can play. He earned a Grammy in 1992 for best rock instrumental performance and had the chops in 1996 to be the guy called in to complete Joe Satriani’s inaugural G3 tour (along with Steve Vai). But Johnson has something quite unique and different from both of those string slingers.

His musical pallet is far more diverse. And he put it on complete display in Denver with a generous, 26-song performance spread over two sets and two encores that roamed a ton of musical territory, from folk, jazz and country to blues, rock and fusion. There were blazes of brilliance where EJ’s fingers flew over the frets generating a unique sound characterized by a piercingly pleasant fuzz lead tone with waterfall runs and snuck-in notes butted up against jangly chords that chimed like church bells. That was pretty much expected. But a number of other songs in the set found EJ sitting at a piano, or coaxing fresh sounds out of an acoustic guitar. There were instrumentals. And vocal songs. And though it may not be everyone’s definition of strong, EJ’s voice is right in line with his entire outer vibe of being incredibly competent, unassuming and disarmingly pleasant. 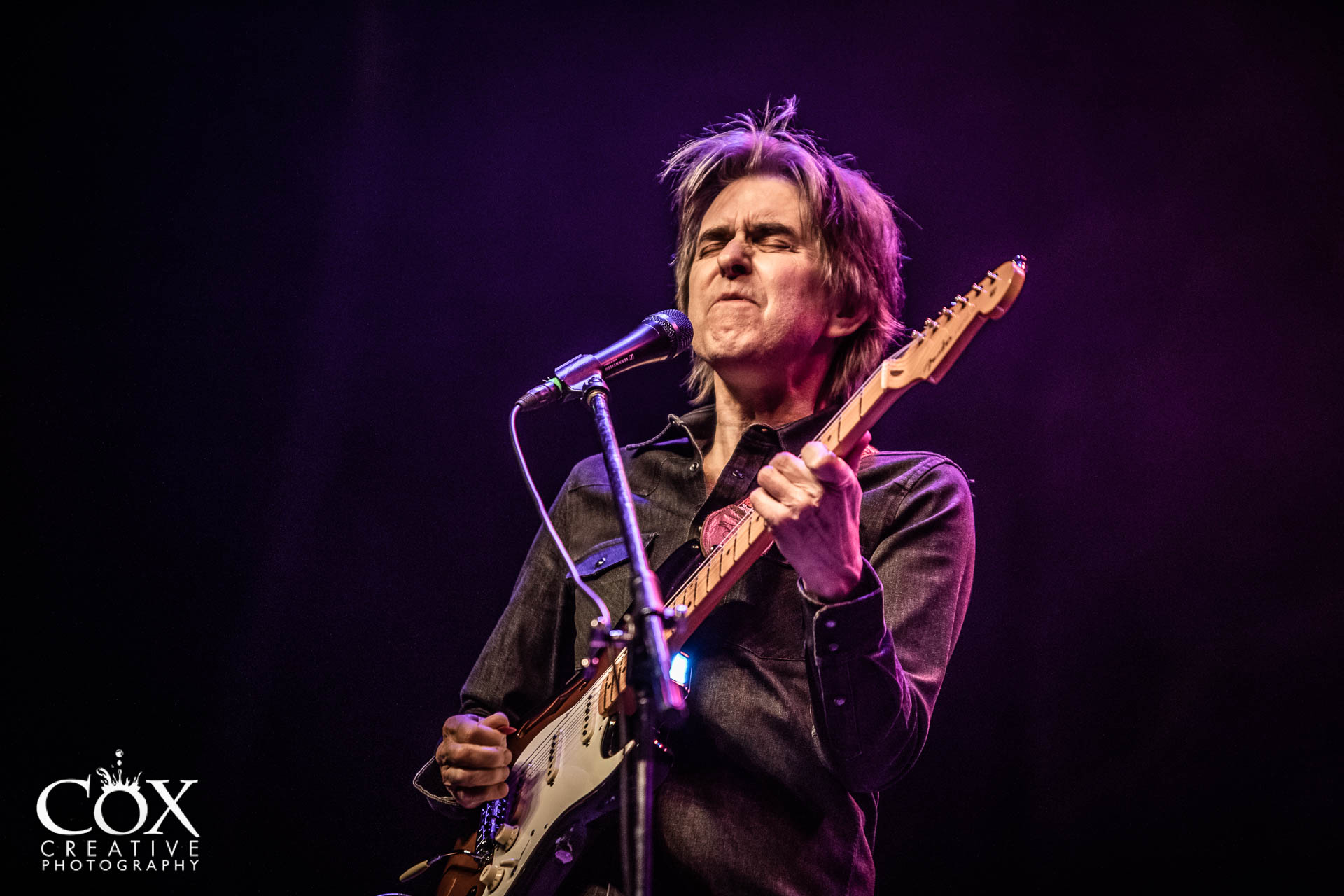 With his slightly rumpled hair and aw-shucks demeanor when speaking, it’s easy to never see what’s coming with EJ… until it’s too late and you’re left gobsmacked wondering what you just witnessed. He’s a gentleman, but I’m pretty sure his guitar smokes a cigarette when he’s done having his way with her. Given the unfair amount of talent he wields, one would think a show of his would be an ode to his ego, but nothing could be further from the truth.

In fact, on this tour, Eric’s band featured long-time bass pal Roscoe Beck, who also played on that Grammy-winning track, as well as road-tested veteran drummer Tom Brechtlein, both of whom were given plenty of space and spotlight to shine. And while EJ often performs as a trio, this time around, he also brought along fellow Austinite and rising guitar star Dave Scher, who not only rounded out the sound with rhythm, but who also added ambience with keyboard, percussion and vocals (even taking lead on one song!). The show was a display of an entire band’s musicianship, not just Eric Johnson’s. And that humility is just part of his allure as a world-class tone and melody constructor.

While the attendance was disappointing, the performance certainly was not. He threw in a number of covers that fell right in line with his set’s diverse approach, including songs originally penned by John Coltrane, The Beatles, Jimi Hendrix, Bert Jansch and Wes Montgomery. And that might seem a tad uninspired in a short set but Johnson and Co. delivered a solid two and a half hours of tuneage with tons of original music. (In fairness, it’s possible that playing the next night just up the road in Ft. Collins may have splintered the number of fans coming in for Denver’s gig at the Paramount downtown.) 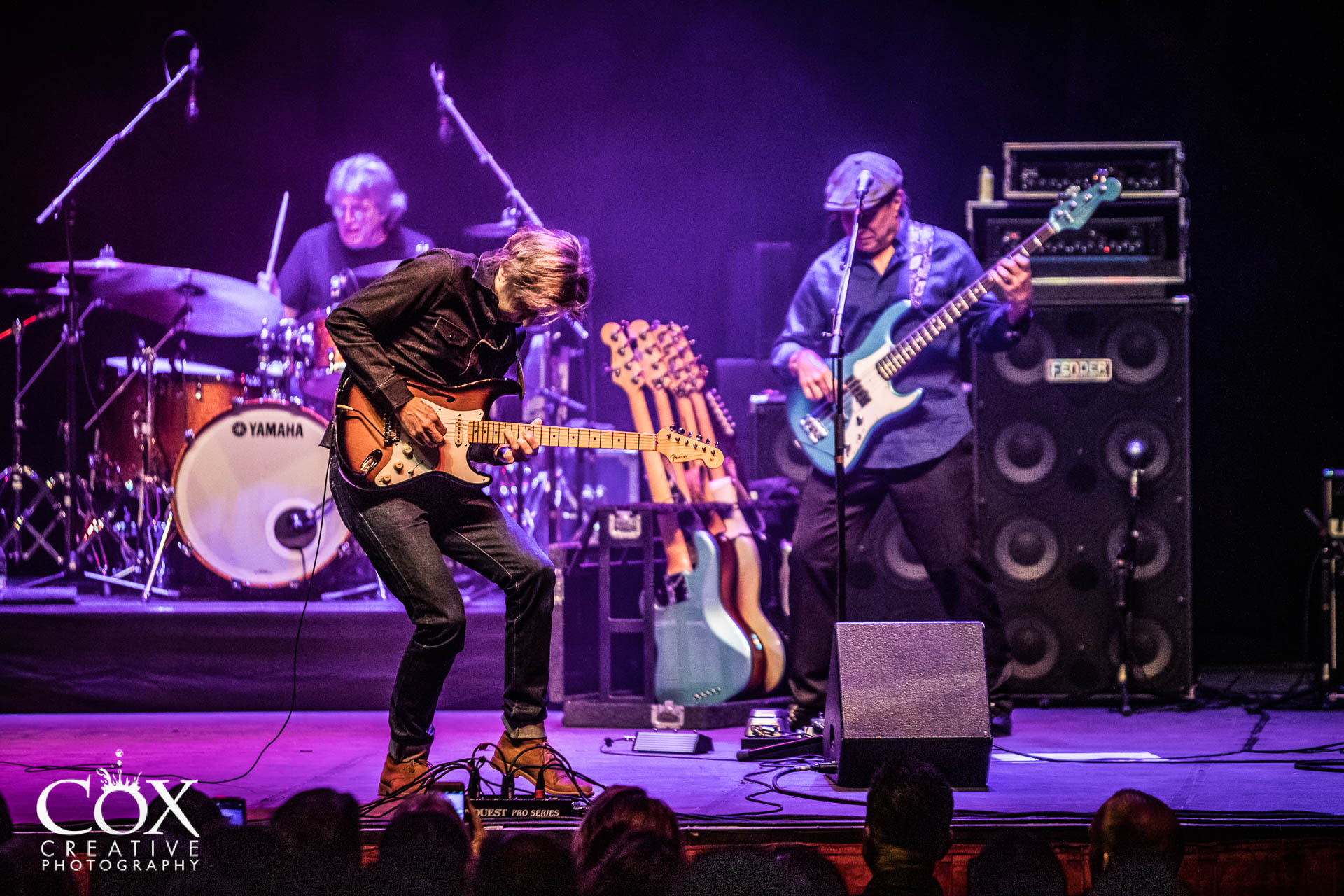 Given Johnson’s reputation for perfectionism, he was likely irritated with a few missed cues from the soundboard where a vocal level was too low or the beginning of a lead was initially buried, but adjustments were quickly made and none of it could do much to reduce the impact of a gifted player backed by a fantastic band putting on a remarkable display of diversity and dexterity.

One of my personal favorite tracks of EJ’s, “Lonely In the Night,” was a welcomed surprise, though honestly did sound a tad sparse compared to the intricate studio version. A female fan kept shouting out for “Cliffs of Dover” throughout the night, which was kind of annoying because you knew it was coming in due time, which turned out to be the conclusion of the second set. He was blazing so fast that he almost seemed to be pulling away from the drummer at times. It was incendiary, and brought people to their feet shaking their heads.

He returned to the stage for the first encore at the piano again, wisely delivering the calming “Shining Love” before the romping assault of “Zap,” which featured both him and Scher trading twin leads and bringing the house down. It was a fitting ending, and one I mistakenly assumed as I left and later saw online that they returned for a second encore that I missed.

All that is great about authentic live music is featured on this tour. He’s that good. Don’t miss your chance to “Experience Johnson” in 2020.

Things We Said Today (The Beatles cover) / R.V. / Friends / Drifting (Jimi Hendrix cover) / Impressions (John Coltrane cover) / Trademark / Down Here on the Ground (Wes Montgomery cover) / Mama / Waterwheel / Over the Moon / Nothing Can Keep Me From You / Soulful Terrain / Righteous