I’ve always been of the opinion that live performances are the ultimate baptism of fire for any musical act. We know many tricks can be accomplished in the studio with the use of modern technology, yet things are very different when you have a venue packed with roaring fans in front of your eyes, and the stage manager is signaling with a small flashlight the path you should walk through to get to the stage. Granted, it also depends on the level of complexity the band’s music entails, and how well the performers react in a live setting: not every single band, despite the talent of its members, is capable to transform an outstanding studio recording into a memorable and energetic show. It can turn into daunting experience and mistakes during a live set are very likely even for skilled and seasoned musicians, even more so if the night’s set-list is on the long side.

Through many years of chasing live shows and capture fleeting moments with my cameras, I’ve seen hundreds of bands perform, and within those experiences I’ve witnessed a fair share of whoops moments here and there. Moreover, every now and then I’ve beheld virtually flawless displays of musical mastery, so close to perfection that you grasp the armrest of your chair – or the hand of your partner – to make sure you ain’t dreaming and what is happening in front of your eyes is actually happening. Last Wednesday I lived through one of those “musically religious experiences” while enjoying Dream Theater’s 3 hours long spectacle at the Hard Rock Live in Orlando, Florida. If you were amongst those lucky mortals who saw (or will see) them playing live in this tour, supporting their recently released and widely acclaimed album Distance Over Time, you would understand how it feels. If you couldn’t catch them, I’d recommend you to keep reading, although I know the task of putting into words the utterly power and emotion that transpired through the theater walls seems too Herculean for my limited writing abilities. 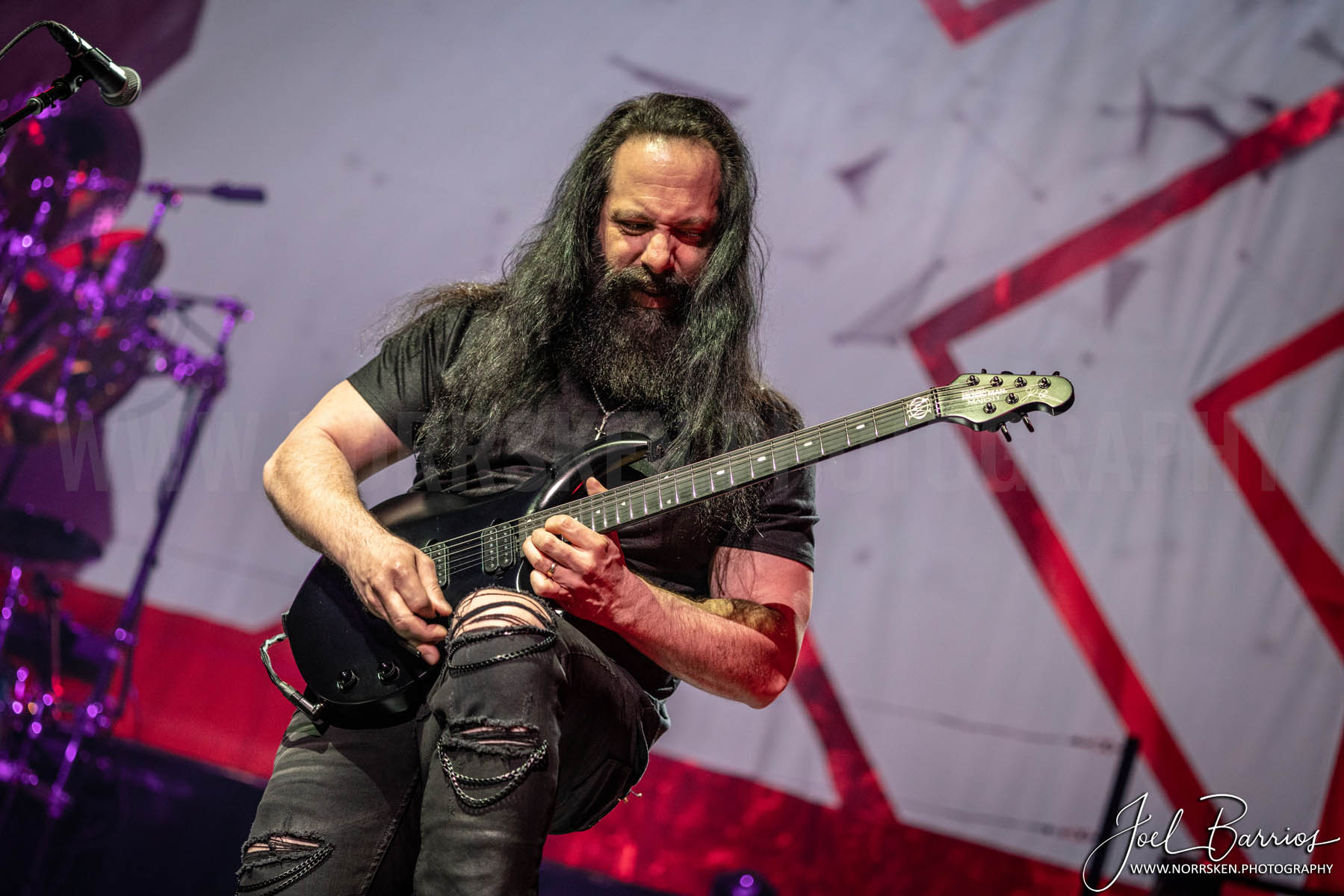 No introduction is needed for John Petrucci and company. Jettisoning a genre as their progenitors since the end of the 80s – accolade that some consider should be shared with the beginning of Ray Alder’s era of Fates Warning – these guys have created some of the most beloved songs ever penned in the progressive-metal universe, and have stunned the world with a 30+ years career, two Grammy nominations, more than 12 millions records sold, and most importantly: jewels like Images and Words (1992) and the colossally epic Scenes From A Memory (1999), which is being played live in its entirety as a 20th year anniversary celebration.

It’s highly probable the band is finding very enthusiastic audiences throughout the course of this tour, yet Orlando was second to none. In a beautiful theater, packed to the brim with rockers, metalheads and prog-junkies, the roaring response to the start of the show, which came in the form of a two-minutes futurist video intro showing a progression of band’s history and their albums – created by uber-talented video artist Wayne Joyner (you can glimpse at it at this location) – was immediate, and rose to deafening levels when the silhouettes of the four of the world’s most technically proficient instrumentalists appeared within the shadows. 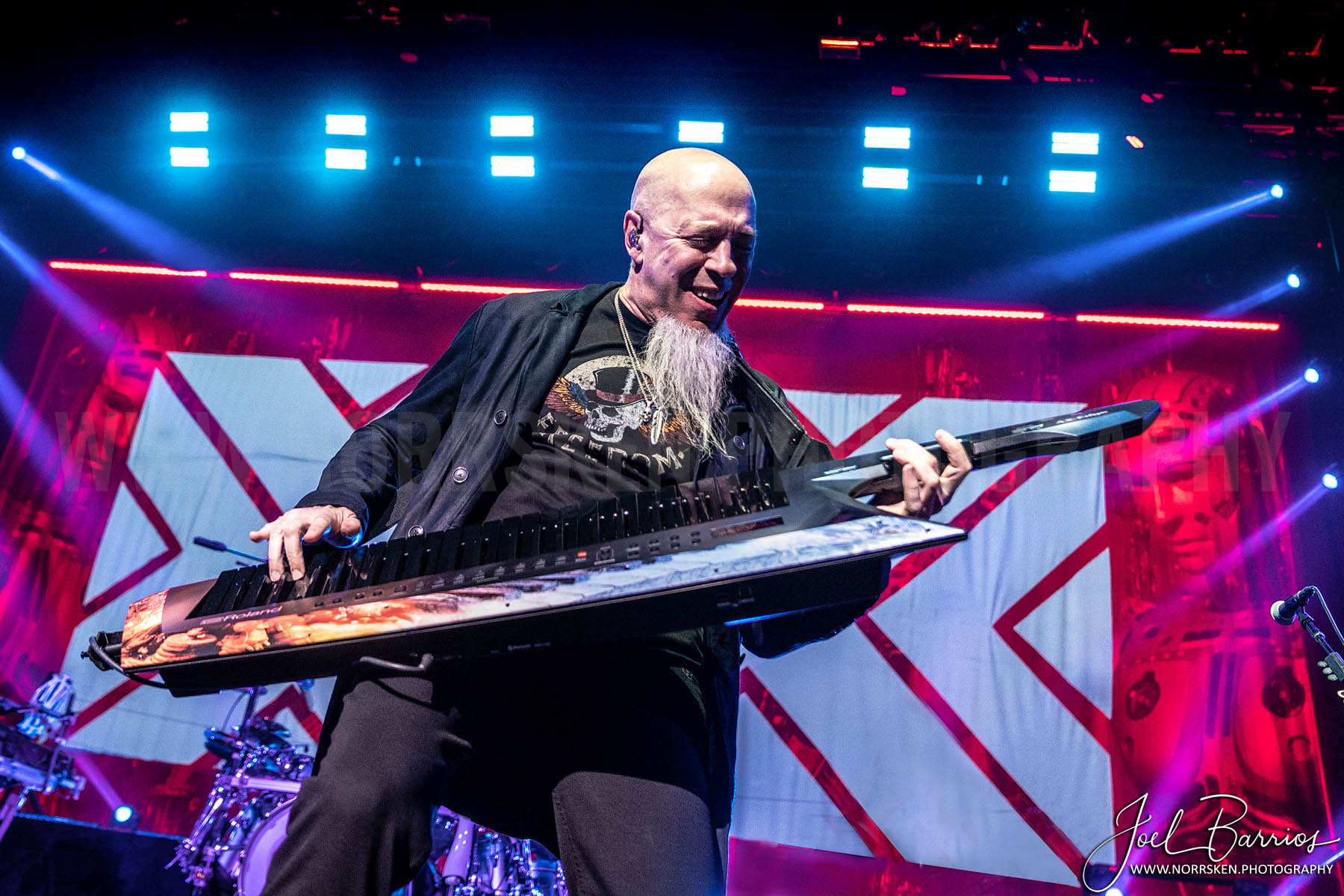 With the night divided in two well-defined acts, the first 4 out of the 6 songs came off of their new album, with the exception of the delightful return of the ominous and riff ladden “A Night to Remember” and the towering and ever-evolving “In the Presence of Enemies – Part I”, a pair of epic compositions that move through some dark, somber and seemingly endless time changes, overflown with cascading guitar solos, changing time signatures, dueling guitar and keyboard sections, and exceedingly intricate drumming. Obviously, the Distance Over Time singles found their way into the first act selection: the chunky, 8-strings low-tuned heaviness of “Untethered Angel” and the enchanting, mysterious and melody infused “Fall Into the Light” received instant and unanimous approval reactions from hundreds of throats. Much to my pleasure, two of my favorite songs from their latest offering also made the list: “Barstool Warrior” with its Dixie Dregs infused intro, followed by a prog-metal whirlwind reminiscent of Rush‘s classic moments before delving into a beautiful piano interlude plus equally textured and melodic guitar lines; and the act-closer “Pale Blue Dot” boasting a syncopated heavy guitar and drums opening that gradually morphed without losing its power, joyfully melodic and almost jazzy in its interplay between dark bass shading and frenetic keyboard tapping combinations, all of that scattered by Mangini‘s unremitting and poly-rhythmic drum arrangements. 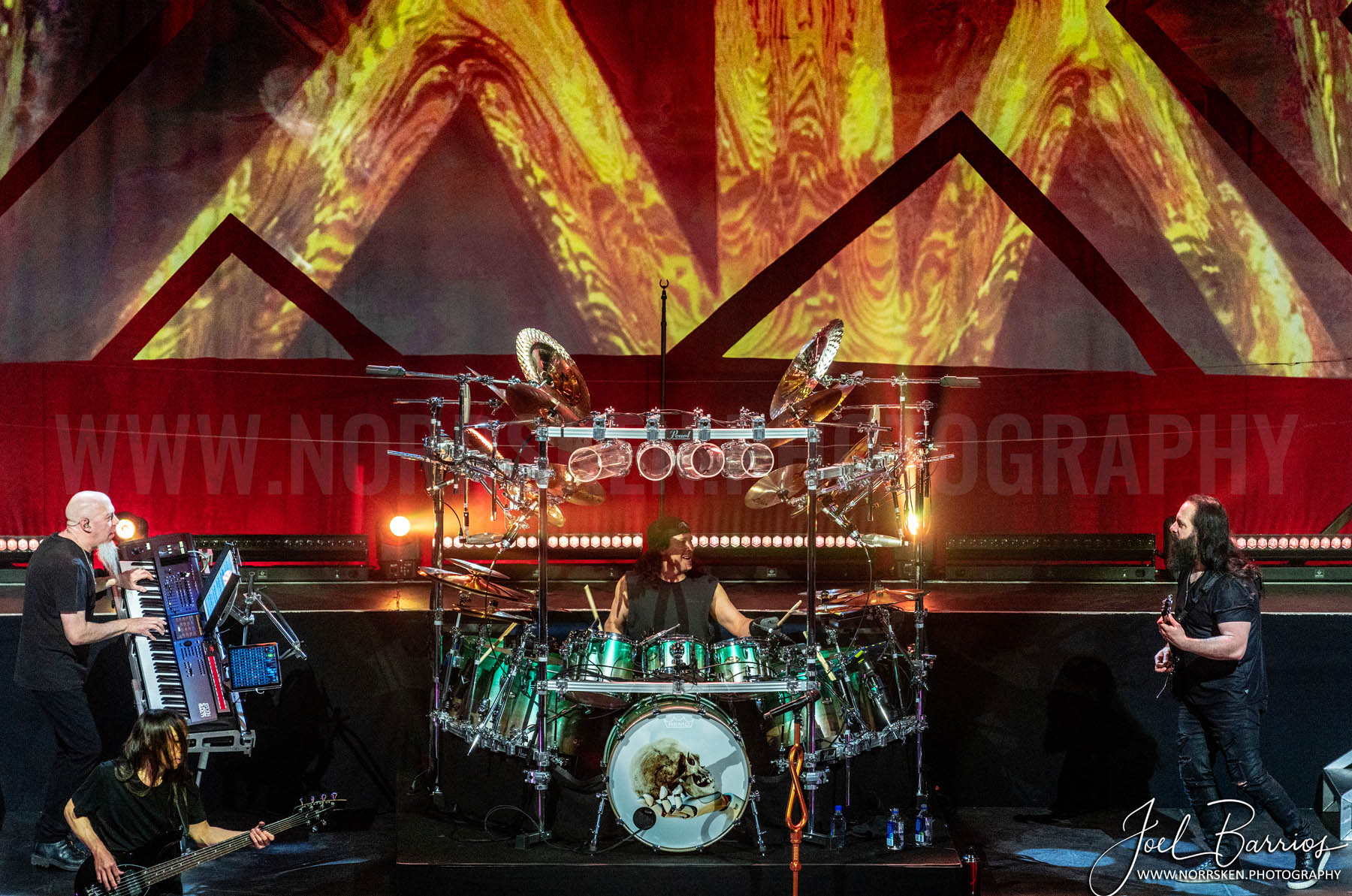 Throughout their career Dream Theater‘s live shows have gradually become bigger, longer and more diverse, and this tour features arguably their most ambitious stage production to date. A giant screen acted as the stage backdrop, stairs on each side led to an elevated platform behind Mangini‘s centered drum-kit, and Wayne Joyner‘s video animations continuously displaying on the screen added another layer of synergy to the lethal recipe of metal, melodies, and progressive roots relentlessly served from all directions. Long known for their almost inhuman virtuosity and versatility as instrumentalists, the four men on stage unleashed a sonic attack on the senses of every soul in attendance. Petrucci’s guitar passages alternated between creative grooving riffs and god-like shocking beauty solos, Rudess invisible fingers danced over this rotating and tilting keyboard rig adding an ethereal vibe, and his enigmatic wizard-like presence irradiated a spell-casting aura. He abandoned his position to come to the edge of the stage in a couple of occasions, manning a keytar and claiming the spotlight, kneeling down amidst some ridiculously fast solos while his hands flew incessantly over the instrument. Myung didn’t move much, but his fatty and polished bass sound was all over the place, authentically pushing the overall sonority to audacious limits; whereas Mangini‘s performance sat even higher than his cymbals, with some of his snare runs being so oddly timed that you would believe the man has an additional hidden limb. LaBrie‘s vocal harmonies delivered enough oomph and emotion to maneuver the lyrics seamlessly, yet his mic level was lower than it should have been in the overall mix, sometimes drowning his voice in a amalgam commanded by his band-mates sonic juggernaut. 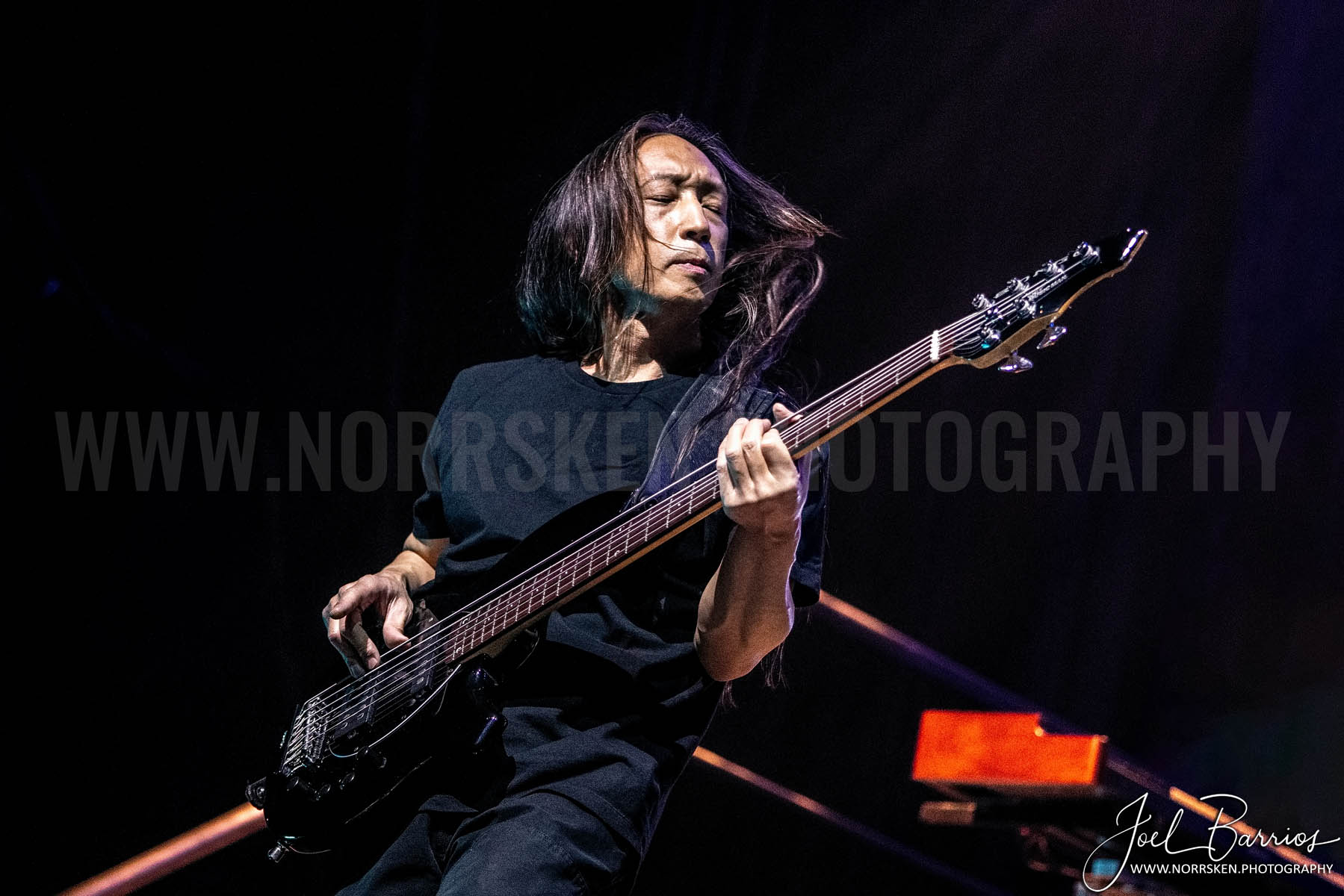 After a two minutes intermission, the lights dimmed again, as the prelude for the night’s biggest draw: the performance of Scenes from a Memory from head to toe. While Joyner‘s hand-drawn based video animations started to pass through the big screen – a welcomed fresh idea to tell a tragic yet life-affirming tale of love, betrayal, murder and reincarnation – I had a déjà vu experience: I saw myself once again during the summer of 2000 sitting in front of a Russian 20 inches color TV in my hometown of Havana, Cuba, in the company of some friends with my eyes glued to the screen where the VHS tape of Metropolis 2000: Scenes From New York was being played over and over. Remember what I alleged at the beginning of this already tad-long chronicle about how difficult is to achieve a close-to-perfect live show? Well, that is exactly what we got after the initial chords of the acoustic, Pink Floyd-like “Regression” escaped from Petrucci‘s guitar strings and into the airwaves.

Scenes from a Memory is perfection in my book, an unforgettable musical odyssey which takes you by the hand and keeps you on your toes, never quite taking the turn the listener might expect; and the band embraced the bewildering intensity of the album and its majestic, multi-layering, artistic construction to connect with the crowd at all possible levels. The stage illumination alternated between seas of red and blue, and the audience audiences never-ending thirst for emotion and progstastic moment was quenched by the enlightening verses and enthralling melodies of “Strange Déjà vu;” the gothic undertones and extended instrumental section of “Fatal Tragedy;” the viciously heavy “Beyond This Life” with an epic jam monster during its second part; and the Middle Eastern sitar-infused “Home” with its smashing wah-wah riff, chaotic tempo changes and jazzy-driven culminating moments. LaBrie mic issues disappeared and he sang and wailed like there was no tomorrow, his voice clearly discernible in the mix, meanwhile the fantastic four teared up mercilessly. 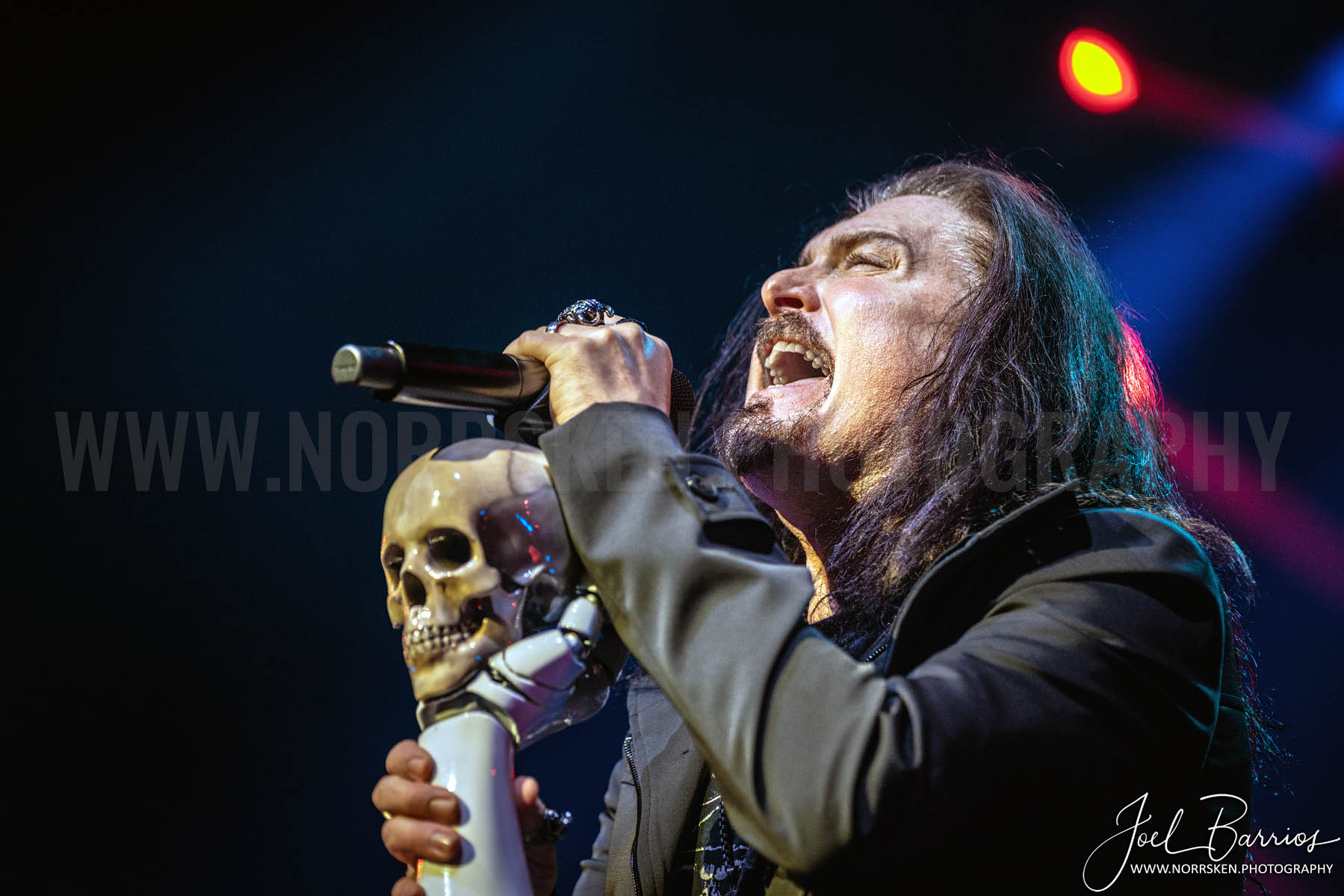 The album exuberant tandem of final four scenes started with the jaw-dropping (by any musician on Earth standards) “The Dance of Eternity,” and included the anthemic and gospel sumptuous “The Spirit Carries On,” perhaps the album’s key song with Rudess touchy piano progression and Petrucci’s magnificent and soulful solo that evokes the best of David Gilmour, leading to the ultimate closer: the stunning “Finally Free,” which reveals the truth of Victoria’s death, taken to its climatic finale by Mangini’s “beast mode” drumming exhibition, likely the only section of the night that deviated from the original recording, as he re-imagined the drum solos in his own personal way, propelling the complexity to the stratosphere. A thunderous, wild cheering and even bigger applause erupted, and lasted for several minutes as the lights came back and the band left the stage.

Much to the delight of the insatiable fans the five men returned to encore with the band’s major MTV hit, the iconic “Pull Me Under” a song that played a huge role in putting Dream Theater in the map, and continues to be a fan favorite. Drenched in sweat, and with smiles of appreciation painted in their faces, they all proceeded to greet the fans, waving their hands at those in the farthest sections, gathered together up-front for the customary reverence and abandoned the stage amongst a fervent and massive storm of incessant applause.

It’s hard to fathom whether progressive-metal would have ever existed had these guys never decided to form a band and start writing on their own, and for that humanity should be grateful, ‘cause whether you have never heard of them before or you are a die-hard fan, truth is Dream Theater’s mark in the history of universal music is undeniable. A band currently at the peak of its powers, calling them a force of nature is just a scanty and mostly inadequate attempt to describe their greatness. They certainly deserve every bit of recognition and praise, as they continue to attain a well-earned legendary status. Long may the Theater of Dreams astonish us with their majestic scenes.