If you know about UK power metal heroes Dragonforce, you are aware what they are known for: blistering fast guitars, catchy choruses, and soaring vocals. Their ludicrous fretboard acrobatics were a particular trademark at the height of their popularity, and even when the guitar instrumentation on their last couple of albums has been a bit more restrained, they are always complemented extremely well with the symphonic sound of the keys in the background, and the extra solid rhythm section. Despite them having played ProgPower USA while I was in attendance, I missed the vast majority of their show, so I decided to catch them on the last stop of their US tour this weekend.

“Once Human” was the only opening band, and to these ears, they sounded in the vein of Devil Driver, and Arch Enemy; and honestly, their front-woman, Lauren Hart, can rival Alissa White-Gluz when growling: her throat-scarring level of vocal brutality completely contradicts her soft appearance. I was completely unfamiliar with their music, but immediately recognized Logan Mader (ex-Machine Head/Soulfly) as one of the guitarist. Their set was an avalanche of metal, with clear and compelling screaming fleshed out by a groovy and thunderous rhythm section. I very much enjoyed their impeccable version of Machine Head’s classic “Davidian”, where Lauren managed to engage the audience to sing the second part of the famous chorus “Let freedon ring with a shotgun blast” making the tune even more phenomenal.

After a short intermission, with the subsequent stage clean-up, Dragonforce appeared amongst a unison clamoring. From the moment they hit the stage, opening with the title track of their latest album “Reaching into Infinity”, the band looked like they were having one of the best times of their lives, the degree of joviality and humor between them was palpable, and particularly apparent through the duel guitar onslaught of Herman Li and Sam Totman who seemed to be having an absolute blast. Making a performance unique is quite a difficult thing to do these days, and they make the whole thing look far too easy. At any given time throughout their set Totman would play a solo and be jogging in place, Lambert would wave to someone in the crowd between riffs, Theart would pretend to fall asleep during protracted guitar playing, they would give each other the finger, yawn during each other’s solos, make emotive faces to the crowd, or mock their playing ability during a song. All of this while the songs were executed with surgical precision and speed. This is all part of the Dragonforce appeal, and this performance was filled with these little moments that brought the whole evening together. 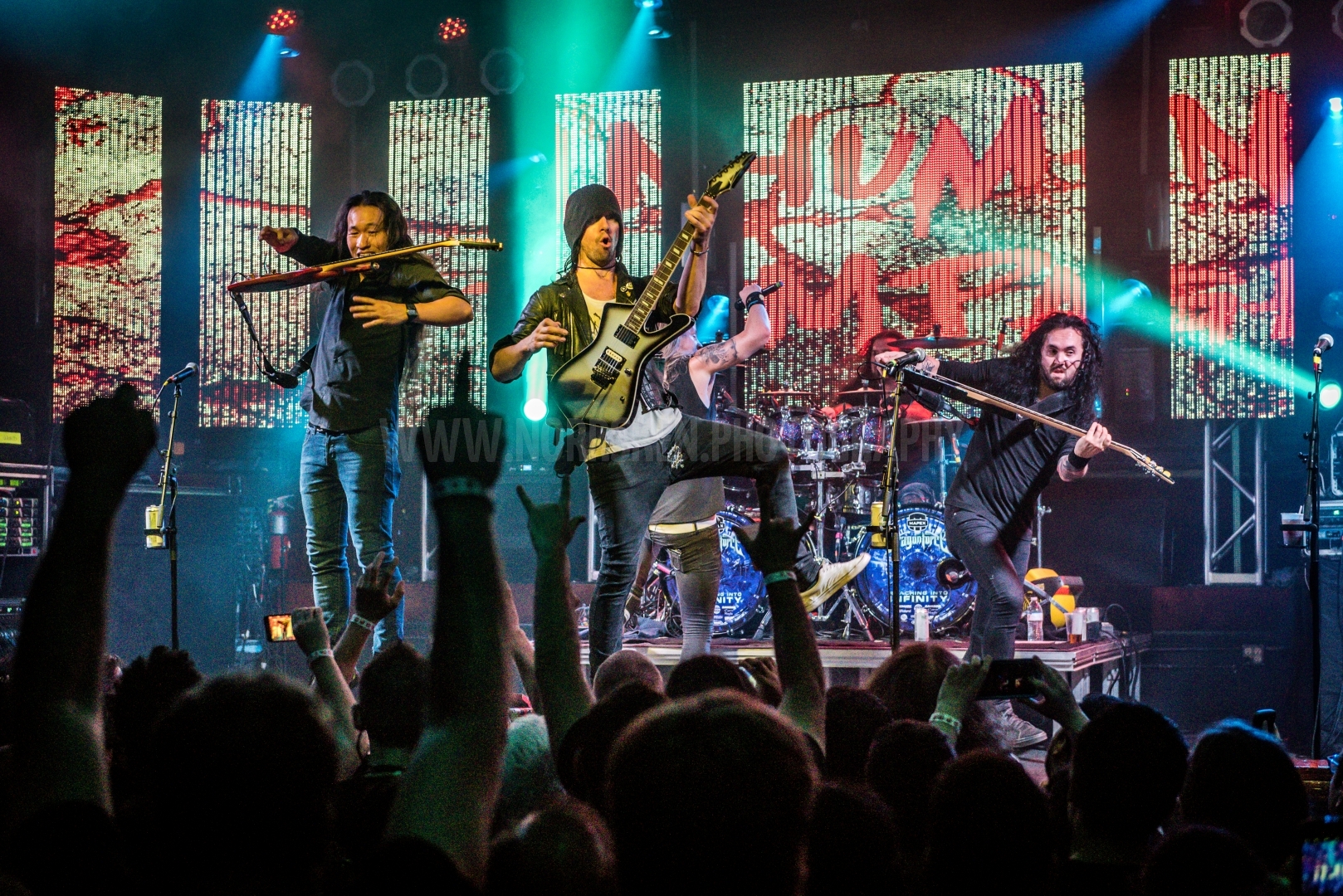 Dragonforce playing at The Culture Room

Halfway through the night Frederic brought a Sonic The Hedgehog guitar and he then started to play melodies from retro video game soundtracks with a video of gameplay playing in the background, amidst the screams of approval coming from the audience. One of them was a song from Street Fighter 2, which started one of the many mosh-pits of the night. Marc also grabbed a bass joined Frederic playing a track from Super Mario Brothers 2 for a while. After a thunderous drum solo courtesy of Gee Anzalone, the Brits jumped head first into a fan favorite “Heart of a Dragon”, followed by the epic “The Edge of the World”. The funniest moment of the night came during “Cry Thunder”: Marc asked if there was someone in the front row who would like to sing on stage with him “Is there anyone in the whole fucking crowd, who knows the song and would like to come sing?!” Somebody said yes and Marc invited him to come on stage. He and the band hugged each other and then gave him one of their beers. After drinking Marc brought the microphone over and lets the guy sing the chorus. Before the fan could get back down off the stage Marc said, “It takes some serious balls to do this shit! We gotta let him off the stage properly! Let him do a stage dive! What do you guys say? You gonna catch him?” The crowd screamed “Yeah!” He then dived off stage and crowd surfed back to his spot. The encores came in the form of “Valley of the Damned”, a cover of Merle Kilgore’s “Ring of Fire” and the earth-shattering “Through the Fire and Flames”, but not before Marc invited everyone in attendance to stick around after the show and get drunk together. After the last notes vanished they threw the guitar pic and drumsticks to the rousing crowd, shelved their instruments and came to the front of the stage to shake hands with those that were there, taking long bow and disappeared backstage shortly afterwards.

Whether you are a fan of fantasy-themed lyrics and high-speed dual guitar sounds, or you simply want to enjoy some fine heavy metal, played with the right doses of complexity, seamlessly accuracy and on-stage fun, I truly recommend you to put a Dragonforce in your list of shows to experience.