Touring to promote their excellent latest album “Humanicide”, released on May 31st this year, and with the album’s title track being nominated for a Grammy for “Best Metal Performance”, Death Angel hit Toronto on November 26th, bringing Exmortus and Hell Fire in tow. Their triumphant stop on the Great White North was one to be remembered for many years to come.

Hellfire hit the stage at the gruesome hour of 07:45pm, when some of us Torontonians are still commuting from work. Those who missed their show will regret it, because the whole atmosphere was reminiscent of 1984, when metal was still in its formation years. It was only a matter of time until the wave of revisionism caught up with metal, and bands like Canada’s own Iron Kingdom and Hell Fire are coming into the scene to reboot the sound of pioneers like Raven, Saxon, Metallica etc. On songs like “Destroyers” and “Victims”, they payed homage to their influences while forging ahead with a twin guitar onslaught, direct riffs, and headbanging choruses. More often than not we see opening acts swiftly going through their set, almost embarrassed to be there, but not this time. It was refreshing to see all band members dubbing their lyrics on stage a la Steve Harris, with fire in their eyes and great stage presence. The whole band is tight, but the high points of their performance were the stage presence of guitarist/vocalist Jake Nunn, and the tone of guitarist Tony Campos, reminiscent of Metallica on the “Kill ‘Em All” era. The set closer “Free Again” has echoes of Maiden’s first album, and got the best reaction from the crowd. 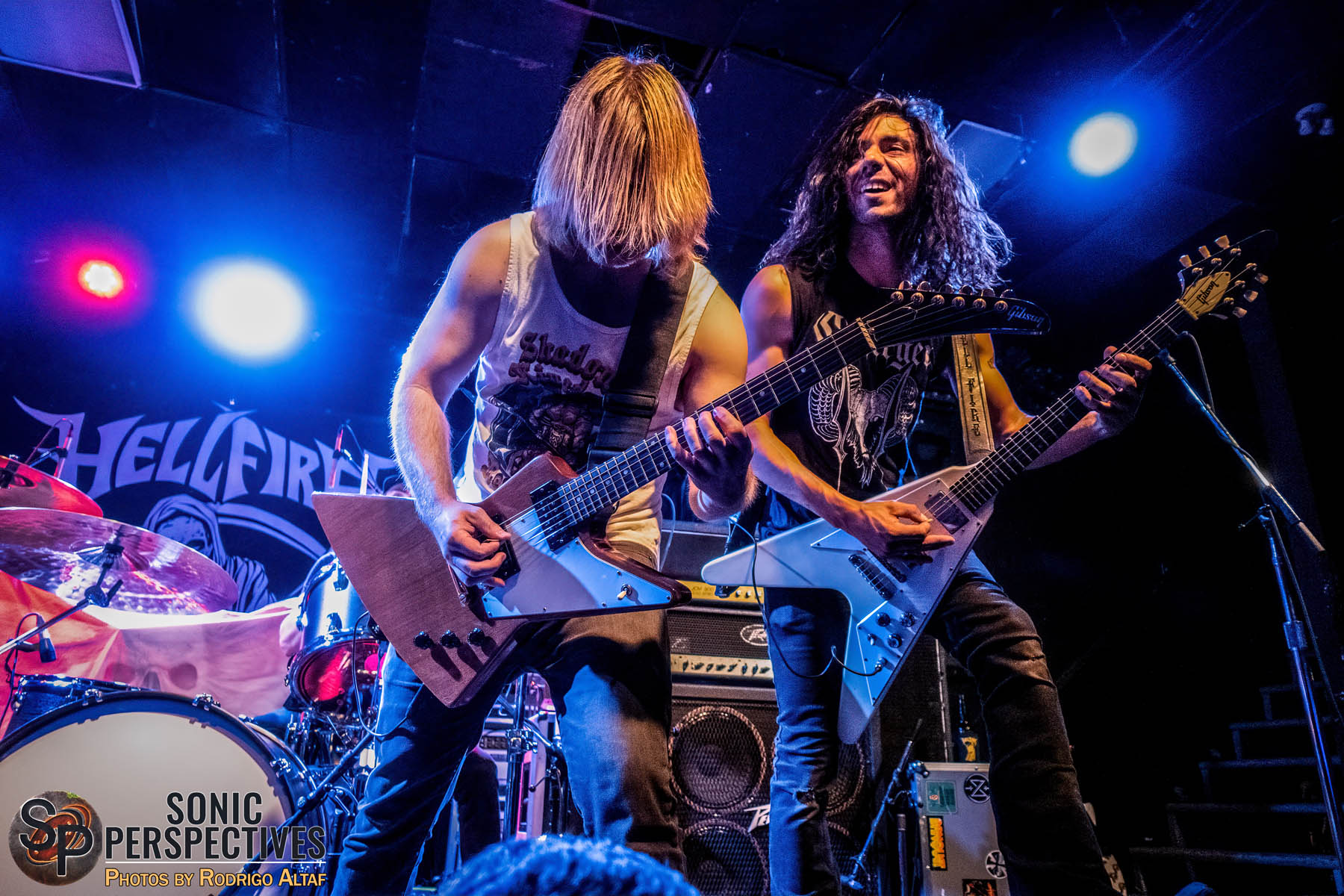 At 08:30, the iconic Lee’s Palace, elected “one of the most Instagrammable places of Toronto” (yes, that’s a thing!) was starting to get fuller, and Exmortus started their set.  Coming from Whittier, California, they’ve been through many lineup changes, and seem to have stabilized now, after the powerhouse drummer Adrian Aguilar and the experienced guitarist Chase Becker joined them last year. And it seems that lineup changes are not the only thing to bother them recently – only a handful of days into this tour, they had an accident with their van and totaled it. A crowdfunding was set up so that they could cover their losses, and luckily 48 hours later they could get a brand new vehicle. Nothing like the good old brotherhood of metal solidarity. And as if to justify the saying that what doesn’t kill us makes us stronger, they sounded amazingly tight tonight. Exmortus’ sound can be described as technical death metal, but rooted on bands like Slayer, Obituary and Testament. Their set-list relied heavily on the new EP “Legions of the Undead”, with the title track and the visceral “Swallow Your Soul” being obvious high points. “Into the Maw of Hell”, from their most recent full-length “The Sound of Steel”, harnessed the first moshpit of the night. 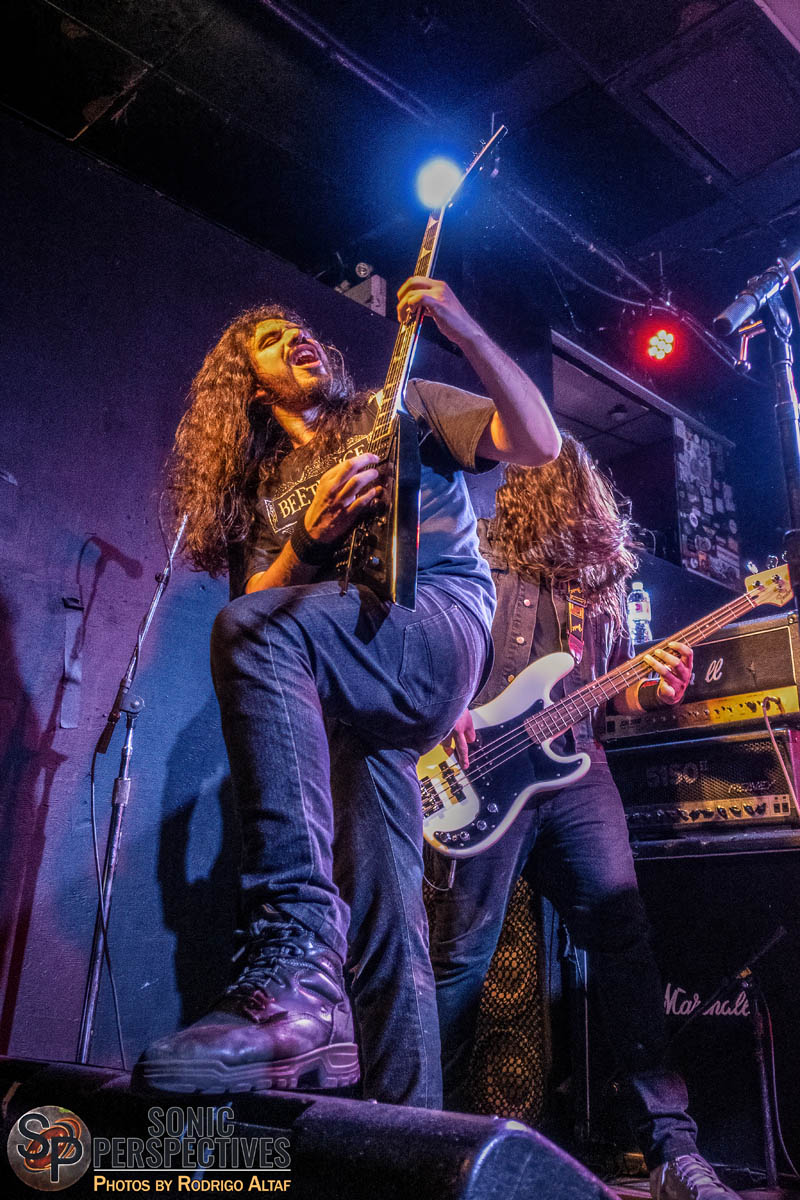 As the Death Angel roadies were setting up the stage, it was clear that the stakes were higher, and the rise in production values was staggering. Dry ice, intimidating strobe lights and an immense drum kit were being set up, and the band kicked things off with the obvious choice, the Grammy nominated “Humanicide”. Their set would be a career-spanning one, but with more than a third of it dedicated to the new album. Intentional or not, the last song on the P.A. system before they started was AC/DC’s “For Those About to Rock (We Salute You)”, which set the tone nicely.

The only other time I had seen Death Angel live was exactly ten years ago in Perth, Australia, with Armored Saint as the opening act. I didn’t know what to expect of their performance then, but their insane stage presence was quite a revelation. Naturally, my expectations for this show were very high, but I’m glad to say they were quickly surpassed. The one-two punch of “Voracious Souls” and “Claws in So Deep” continued the band’s ear-piercing exercise, while the new number “Aggressor” drove the crowd to the edge, with he first mob-like chant of their show. 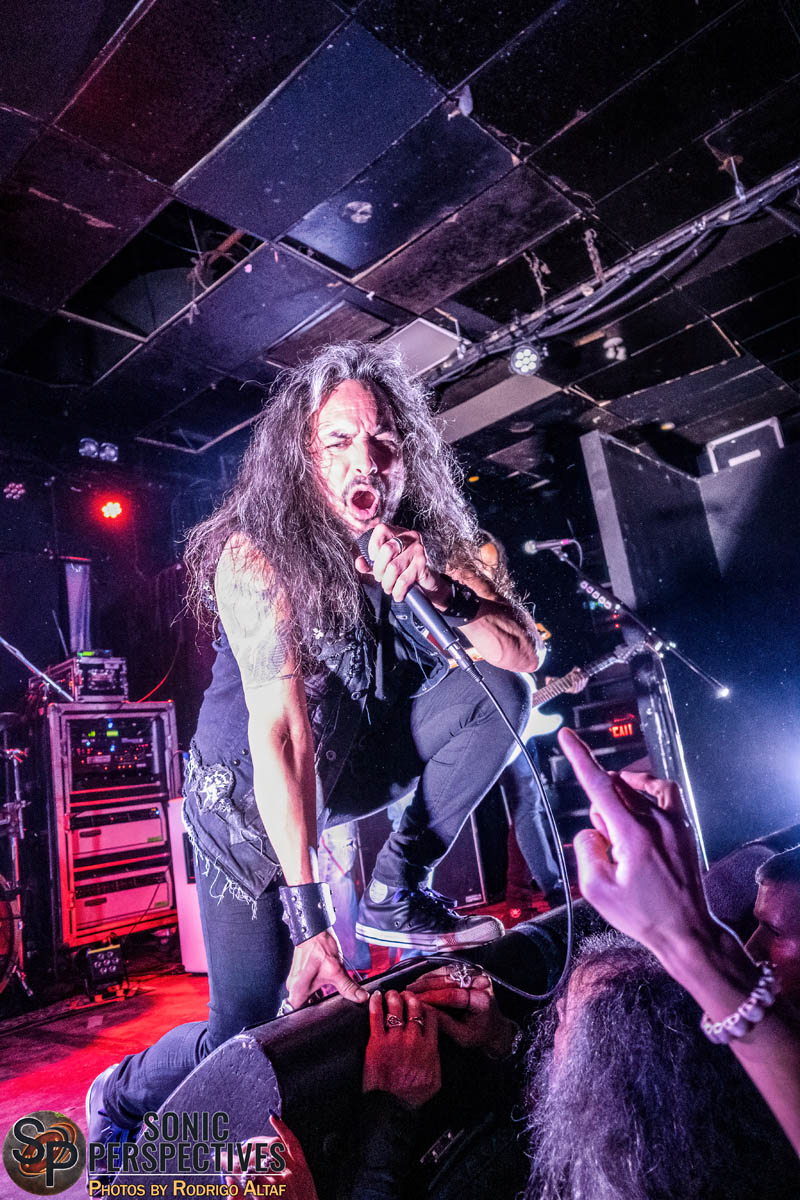 Mark Osegueda addressed the crowd for the first time after “The Dream Calls for Blood”, and introduced the new number “The Pack”. He’s been known for harnessing an aggressive tone but with an acute melodic sense, kind of like a heavier Joey Belladonna, but with the increased level of brutality in the band’s sound, his delivery got more and more in-your-face, with a harsher style. He fist-bumped plenty of people in the audience, and commanded the moshpit and the crowd response on “I Came for Blood”.

The band brought from the ashes the rollecoaster called “Stop”, from their seminal release “Act III”, with Rob Cavestany and Ted Aguilar helping out on backing vocals and showing an almost telepathic understanding on the strings. From the album “The Evil Divide” came the fast-paced “Father of Lies” and the percussive “The Moth”, with amazing and precise performance of drummer Will Carroll.

The cover spot, which on this tour has been filled with Kiss’ “Cold Gin” and Black Sabbath’s “Falling Off the Edge of the World”, consisted of snippets of several Rush songs, such as “The Temples of Syrinx”, “YYZ”, “Dreamline”, “A Passage to Bangkok”, “Analog Kid” and many others. The mild-mannered bassist Damien Sisson couldn’t hide his admiration for the Canadian trio, and brought one bass lick after another, until they decided it was time to move on.

With a shout out to the opening bands, Osegueda addressed the crowd, and brought one particularly raucous member to the stage. We came to know the moshpit enthusiast and massive Death Angel fan Derek Solomos, who seemed very comfortable next to the band on stage, and proceeded to surf the crowd. It was time to bring it home and play songs from their first album, “The Ultra-Violence”: “Mistress of Pain” and the lengthy title track closed the proceedings, on yet another demonstration that Death Angel deserved a higher position on the thrash metal rankings. Here’s hoping that the Grammy nomination helps them achieve the respect they deserve, and that on future tours they play in even bigger venues.

Warpath / Mania / The Dealer / Victims / Into the Light