Living in Miami, Florida doesn’t really help you to get your metal fix.  The lack of metal tours coming to the southeastern side of the sunshine state is palpable, and it’s certainly responsible for our frequent travels throughout North American to catch performances which otherwise we would certainly miss. The last episode of our musical adventures on the road saw us driving almost 4 hours to St. Petersburg to catch CyHra, Kreator and Sabaton during their tour stop at St. Petersburg.  We arrived with more than enough time (as usual), and even when the guest-list and my press credentials were nowhere to be found – and did not appear until the doors were about to be opened – we managed to get inside the venue with enough latitude to secure two center spots in the front line.

Exactly at the announced time the lights went down and CyHra made their entrance. CyHra is a highly hyped-up super group comprised by Joacim ‘Jake E’ Lundberg on vocals, Jesper Strömblad and Euge Valovirta on guitar, Peter Iwers on bass, and Alex Landenburg on the drums. Their past bands involvements include Amaranthe, Luca Turilli’s Rhapsody, In Flames, Annihilator, Dreamland, Kamelot, Axxis, etc. a impressive roll-call of metal luminaries from which you’d expect nothing short of greatness. I had not listened to CyHra’s debut album Letters to Myself, and I’ve got to say my wife and myself were pleasantly surprised. They opened with “Dead to me” which is paradoxically the last song on their new album, and went on thought a  six-song and thirty-minute set. CyHra sounds like they have been playing together for years instead of impressing you like a new band. Obviously, every band-member is a seasoned veteran in the music business, yet their performance was polished, tight and sounded all-round spot-on.

CyHra sounds spins around a mixture of In Flames’ huge guitar-driven melodies and Amaranthe’s infectious vocal hooks turn the songs into emotional, bombastic and still driving power-metal anthems. They displayed implausible amounts of passion and vigor, rapidly garnering the attention of the audience and earning a host of new adepts. With two other big metal names on the bill, and a limited time to shine, CyHra certainly did a terrific job to warm-up the crowd in the best possible fashion.

The main reason for me to venture into hours of traffic and delays was to see Kreator play live again. My first and only previous time witnessing the German thrash metal legends blasting the eardrums of everyone in attendance was during their 2013 headlining North American Fall tour with New Jersey thrash master Overkill and Warbringer as the opening act. And for that one we flew to San Francisco. Yup, you heard it right, from Miami to San Francisco… this old-school metalhead do love these guys. This tour is supporting their last years release Gods of Violence, an album that made most of the best metal albums list of 2017. As the stage was being setup, the background music travelled from AC/DC through Metallica and Iron Maiden. Exactly when the last note of “Run to the Hills” vanished the lights dimmed and the notes of “Mars Mantra” began playing, provoking a roar from the crowd that rattled the barrier. The fog machines went into overdrive, the stage exploded into a disorientating dance of strobe lights and red floor lights, and the band pressed the gas pedal to the bottom with “Phantom Antichrist”. Kreator may play fast thrash but unlike many of their peers, their version of thrash is anthemic with stick in your head choruses and guitar solos even the crowd can sing along too. 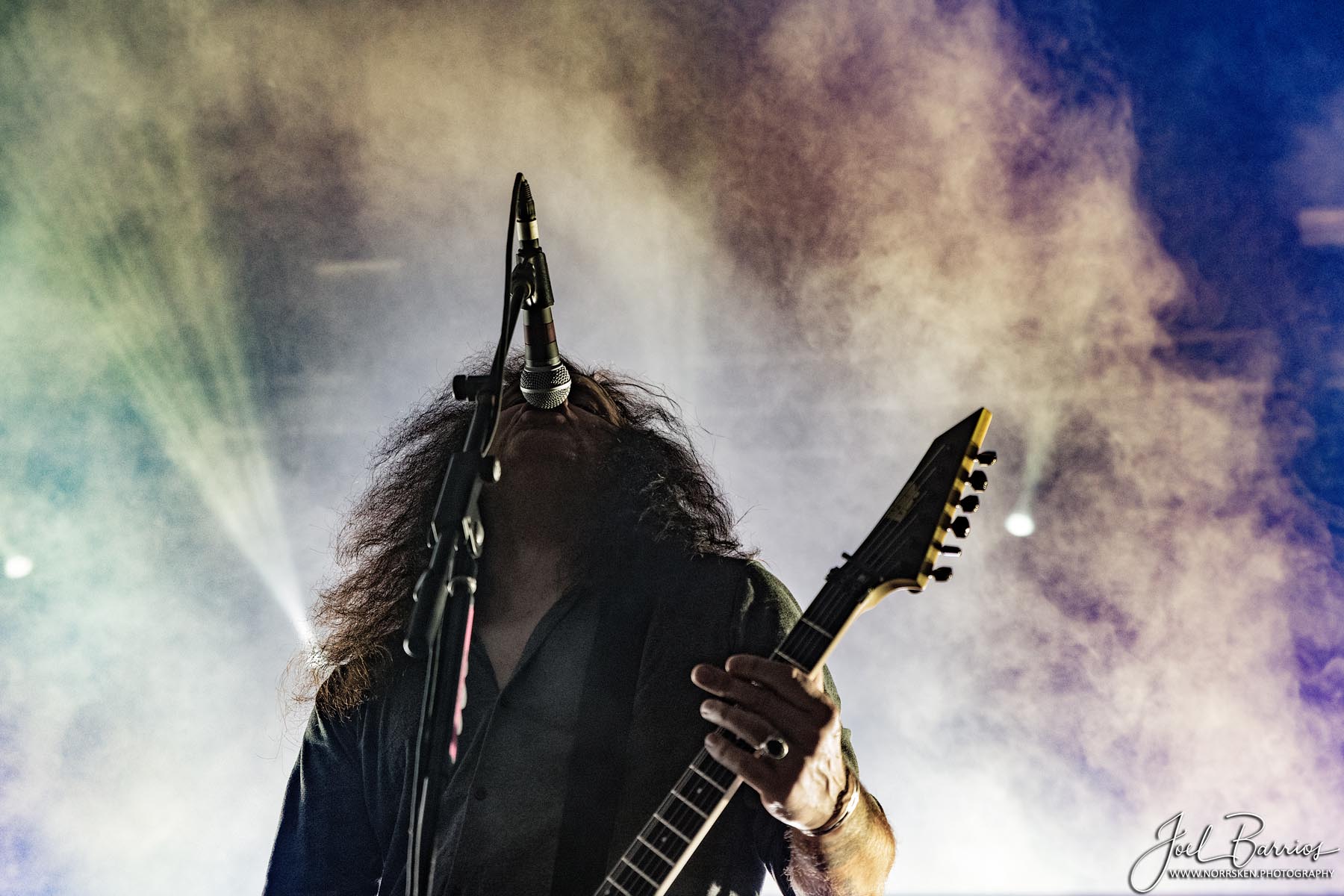 Vocalist/guitarist Mille Petrozza commands the audience like a Baptist preacher, only he preaches in the name of heavy music, inciting the moshers with lines like “…We are from Germany, and we’ve been told the people of South Florida and Jannus Landing have the best mosh pits there is!” The heads were banging and the pits were all good friendly violent fun while the band tore through an impressive set-list including “Violent Revolution”, “People of the Lie”, “Hail to the Hordes”, “Satan is Real” (where the big lit up in flames ), “Totalitarian Terror”, “Enemy of God” and “Flag of Hate”. With a colossal sound, an incredible pace and ear-shattering guitars Kreator is truly a terrifying thrashing machine. Jurgen Reil annihilating drums patterns, Christian Giesler thundering bass lines and Sami Yli-Sirnio effortless guitar riffs combined with Petrozza‘s commanding shrieks and control of the stage revealed the true magnitude of these progenitors of thrash-metal, a band that has been around since 1982 and is able to give any of the Big-Four more than a run for their money. My only complaint was merely from the photographer’s standpoint, as fighting all the blinding strobe lights, smoke apparatuses and constant backlighting presented a true challenge and struggle to get any decent shots. All in all, a menacing and demolishing performance to savor in our memories for the years to come.

Kreator had set the bar extremely high when they left the stage, and it was up for Sabaton to prove they could raise it even more. Chants of the band’s name resonated throughout the venue, as ardent fans anticipated the arrival of the power-metal giants. The background screen illuminated with animated tanks rolling around, and suddenly the band took the stage for “Ghost Division.” It really is a blissful moment when Sabaton take the stage; their energy and how much the band seem to enjoy themselves while performing is truly remarkable. Pär Sundström’s utterly infectious smile, Joakim Broden’s magical levitating/fist pump combos, and guitarists Tommy Johansson and Chris Rorland’s synchronized guitar ballet always make for a delightful experience. Each member wore massive smiles, played cheeky tricks on each other, and Broden’s trademark high-energy antics paired with his thick and powerful vocals and his unapologetically fun attitude made him the man of the night. 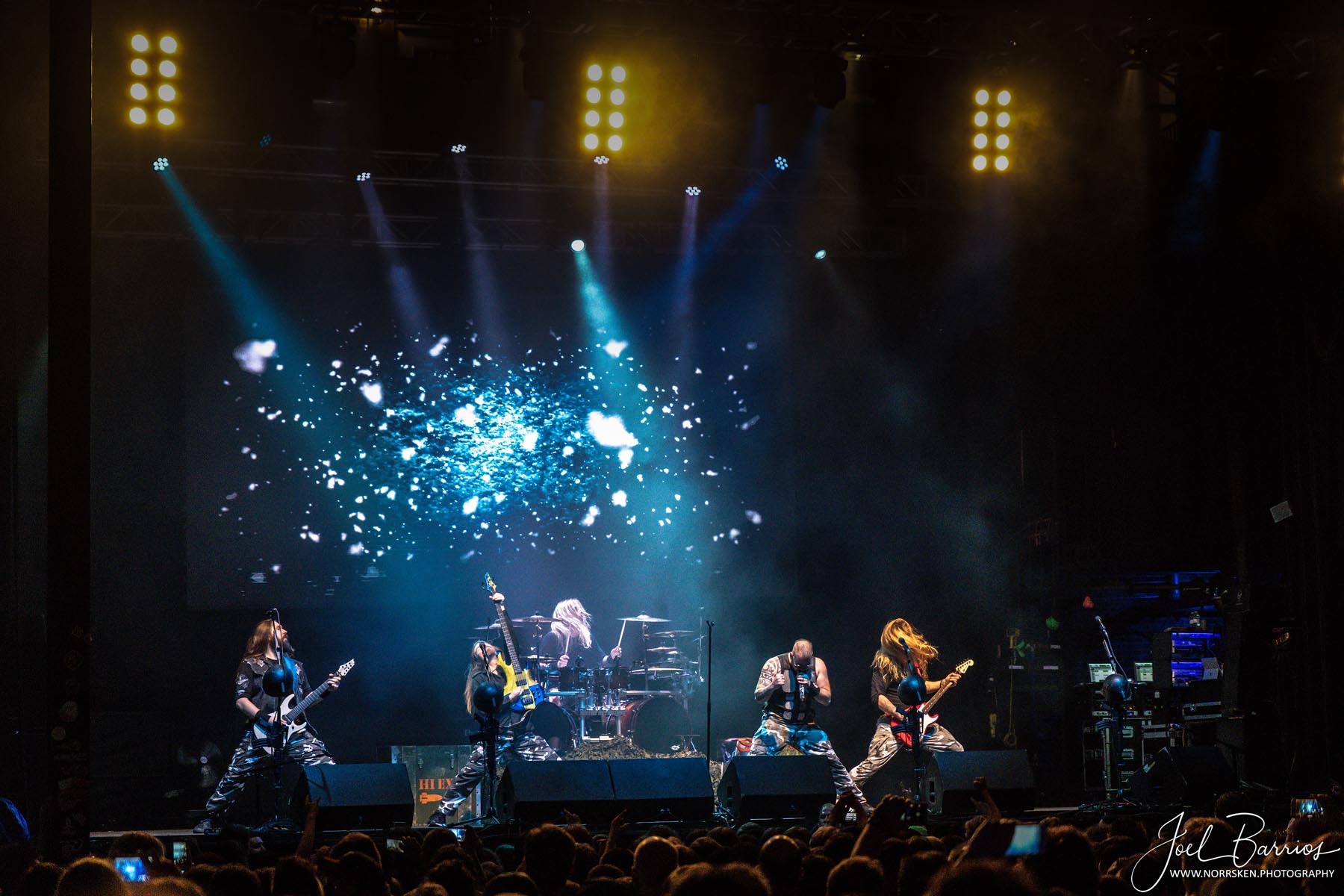 Musically they were firing on all cylinders, the oomph they exude as a collective is beyond impressive. The house was bouncing, cheering, and crowd surfing with the fearless metal offering of Sabaton’s metal anthems. As the set continued, we were treated to many crowd favorites like “Uprising”, “Swedish Pagans”, “Carolus Rex” and “White Death” – which the audience selected as a choice over “Into the Fire”- . I firmly believe the fans would have stayed all night and listened to every song Sabaton ever recorded if they could have. The multitude’s response was so unanimous and enthusiastic that Joakim couldn’t contain his surprise and smiled constantly. Half way through their set Broden strapped on his guitar and said, “…Now it’s time for the one-hour guitar solo!” The crowd cheered, much to Broden’s contrived dismay, and then he proceed to rip out a quick ode to Metallica’s Master of Puppets before the band exploded into “Resist and Bite.” After 13 songs spanning more than 1 hour and a half, they tried to close their set with “Winged Hussars”, but the audience refused and the chants of “Sabaton!, Sabaton!” incessantly filled the air and reverberated until they returned for a tree songs encore of “Primo Victoria”, “Shiroyama” and “To Hell and Back”. The looks of pure elation on the fans’ faces was priceless.

I have seen many metal shows in my life, and this will be taking a place high up on my list of favorites. The three bands were excellent and absolute pleasure to behold, and their faultless performances and the sparking reaction from the audience; it was a dreamlike Saturday night of metal in South Florida.

Encores: Primo Victoria / Shiroyama / To Hell and Back