The co-headlining package of Atlanta’s Mastodon and New York’s Coheed and Cambria, made a memorable stop in Denver Wednesday night. The tour is being called The Unheavenly Skye Tour, but it might as well have been dubbed the darkness and light tour based on the vibe that permeated each band’s set. Playing to what appeared to be a sold out Fillmore Auditorium, which seats about 3,700, there were plenty of bodies eager to take in the show.

As one who had occasionally heard a couple releases by both bands in the past, but never really felt like any of them resonated much, I came to the show somewhat hopeful that something on stage might open my eyes to what both of these bands are doing to build such a solid following. I showed up with an open mind, but also with such a vague familiarity with their catalogs that I had to rely primarily on the actual performance of the evening to form an opinion. Unlike some shows, where knowing the material well results in filling in the blanks with what you know is supposed to be there, this one was a take-it-as-it-comes affair. 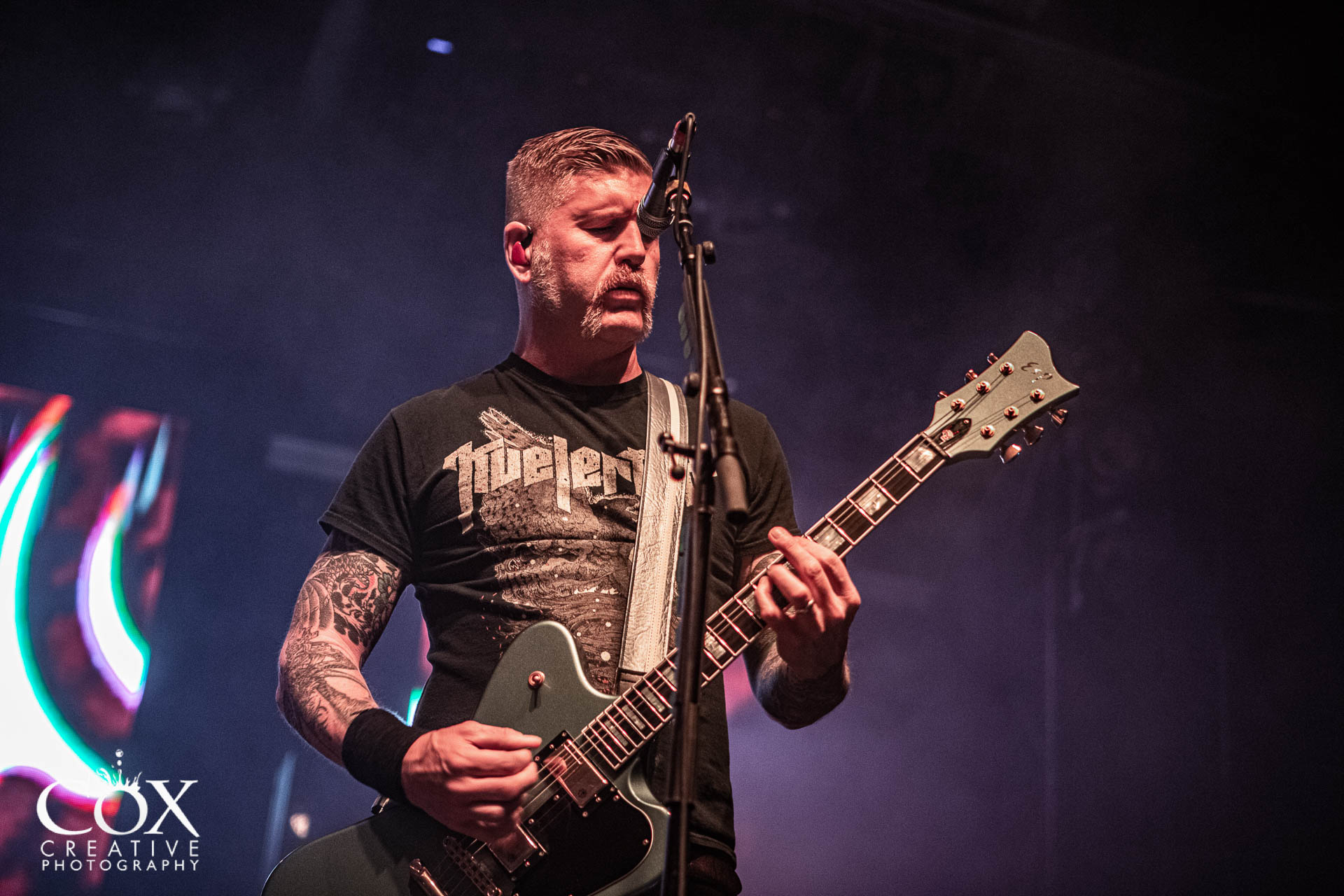 It’s surprising that these bands haven’t been paired together before, particularly given the common ground they share. Both bands are said to have a prog element to them. Both have been growing steadily. And both bands have a catalog of concept records that have been carrying the torch and keeping the art form alive at a time when most purveyors are either retired, broken up, or ignoring the fact that it’s probably time to do one or the other.

Mastodon came on first and delivered a live rendition of the entire Crack the Skye record in celebration of its 10th year anniversary. The album revolves around a quadriplegic who learns astral projection and on his journey flies too close to the sun, burns the umbilical cord tethering him to his body and flies off into oblivion. Meanwhile, in Czarist Russia, Rasputin and his cult channel spirits and bring the quadraplegic to their time, where he foretells of the assassination of Rasputin.

Yeah, Mastodon has worked hard to earn that “thinking man’s metal” badge, and while the storyline may not be very comprehensible to the average listener, it doesn’t really need to be. It’s more like an extra layer of interest for those who dare pursue the journey to understanding. I suspect the majority of the crowd was more at ease simply taking in the wall of sound coming off the stage, than the lyrics that accompanied it. Like the record itself, the live version was heavy, brooding and slightly hypnotic. While there were far more Coheed and Cambria shirts in the audience, the vast majority of the crowd seemed to be both familiar with and entertained by their set.

Sonically, I struggled to separate out what was being played and sung by Bill Kelliher (guitar), Brent Hinds (guitar) and Troy Sanders (bass). For most of the set, it kind of jammed all together. Brann Dailor’s drums, however, cut right through the mix and were surprisingly clean amongst the chaotic rush of guitar and bass.

The band was bathed in dark lighting for most of the set—more designed to set a mood than illuminate individual band members—and they deployed an interesting set of video screen towers behind them that featured trippy and somewhat disturbing imagery that was lessened in effect by the large gap of space between each screen. A single large image would have delivered a more dramatic presentation.

Had I been more familiar with Crack the Skye, I might have had to strain a lot less to comprehend what was being played. Unfortunately, the muddy sound prevailed, and it had the same effect on me as listening to Rush’s Vapor Trails record, where the quality of the songs was obscured by the harsh audio. Near the end of their set, when they broke into “Ember City” from 2014’s Once More ‘Round the Sun, it was as if the dark audio clouds were parted and suddenly the sonic began to shine. The song seemed to suddenly make the band more comprehensible and for this listener, it was the apex of their set. For the rest of the crowd, however, the final song, “Blood and Thunder” seemed to be the highlight, with many punching fists in the air.

There wasn’t much said from the stage during the set, but when the encore ended, Brann Dailor delivered a rather lengthy address to the crowd thanking Denver for always being a great crowd over the 35-40 or so times they’ve played here. He congratulated the city of Denver on its world famous omelette. And said they were thrilled to be helping the Fillmore celebrate 20 years of live music. He promised they would be back next year, to which many voiced their approval. And then he left. 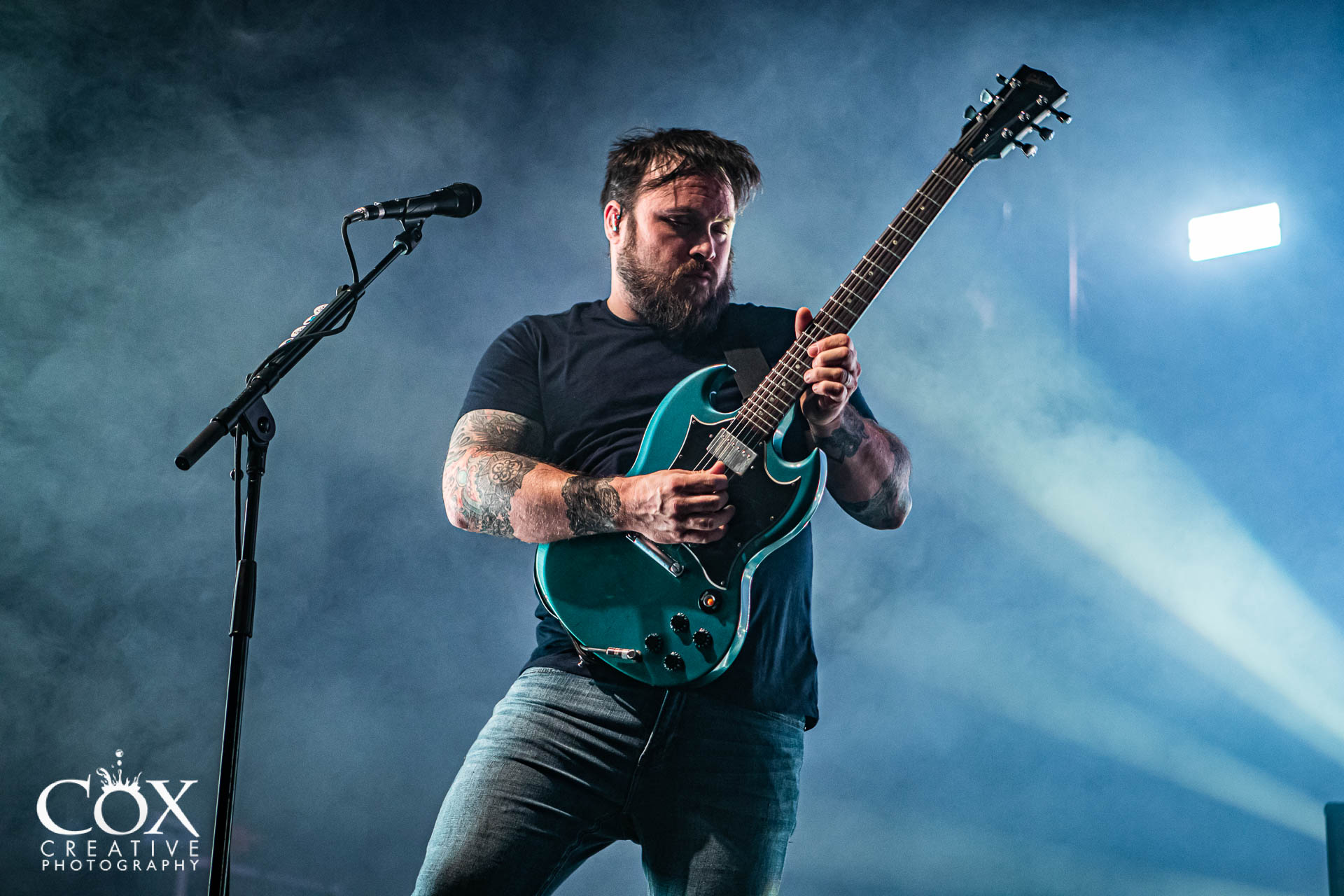 What followed next was a surprisingly large effort to changeover the set. I have never seen so many roadies on stage at one time. They came bearing lighting gear that was run along the floor, complex stacks of pedal boards, and large cabinets of amps. If the goal was to make Coheed and Cambria’s stage presentation significantly different from Mastodon’s, they certainly achieved their goal.

Dark metaphysics gave way to a sci-fi vibe as the lights dimmed and a booming voice wafted through the rafters introducing “The Dark Sentencer.” Bright lights illuminated the band as they blasted into the song and the crowd chanted “hey, hey” in cue. While Mastodon seemed to hold the crowd in a dark, heavy trance for much of their set, Coheed and Cambria injected a bouncy, energetic blast that was upbeat, captivating and crowd pleasing. The movement and energy they came out of the gates elevated the entire mood of the auditorium.

Claudio Sanchez, the dominant creative force behind Coheed and Cambria and their “Armory Wars” narrative, sports a lion’s mane of hair that often hid his face. What wasn’t hidden, however, was Sanchez’s polarizing vocals, which were loud and clear. Coheed and Cambria was sonically superior, with the separation between Claudio’s and Travis Stever’s guitar parts far more distinguishable and digestible than those of Mastodon. The brighter lighting and frenzied movements of the guys on stage all combined to create a surge of support through the crowd. Drummer Josh Eppard played with a constant madman’s grin, often with tongue out, that never went away as if to proclaim that he was doing exactly what he loved throughout the entire set.

Coheed and Cambria played a large portion of their latest release, The Unheavenly Creatures, but unlike some bands where the new music is met with indifference or a rush to the bathrooms, the fans were engaged with all of the new material. Just before rolling into “Mother Superior,” Claudio called up an old friend on to the stage and had the entire auditorium sing “Happy Birthday” to him. It fit the celebratory mood that their set was evoking.

The band closed with “Welcome Home,” a crowd favorite that elicited the biggest sing along of the evening. The audience was an interesting mix, with an average age much younger than the typical rock show I take in. Unlike the typical prog-rock show, this crowd was comprised with nearly as many ladies and men. Both sexes were proudly wearing the rock uniform (black T-shirt), many with Coheed and Cambria’s artwork on it. And by the end of the show, the merch line was lengthy, indicating that many more would soon be purchased.

The pairing was a good one, with both bands bringing something different to the table. Coheed and Cambria’s high energy performance with stellar light show absolutely won me over, while Mastodon gave me the sense that continued listenings may reveal what so far has been missing. Time will tell.

The Pavilion (A Long Way Back) / Welcome Home