Many words come to mind when you hear the name Cannibal Corpse, but one truly defines the soon-to-be thirty-year veterans: Unstoppable. Death metal is an established form of relentless underground music that is here to stay, and acts like Cannibal Corpse have shown that sticking true to the genre is one of the main ingredients for such longevity. That aforementioned adjective – and many more – were in full display last week when the Florida “corpse-grinders” stormed the Culture Room venue in the heart of the Fort Lauderdale area for the closing tour date of their Red Before Black tour.

The night began with the local death/thrash metal veterans, Hellwitch. The venue started to fill up progressively as Hellwitch warmed up the crowd with their brutal and raw sound. It’s always great to appreciate the local metal scene alive and kicking and pushing themselves in front of new audiences. 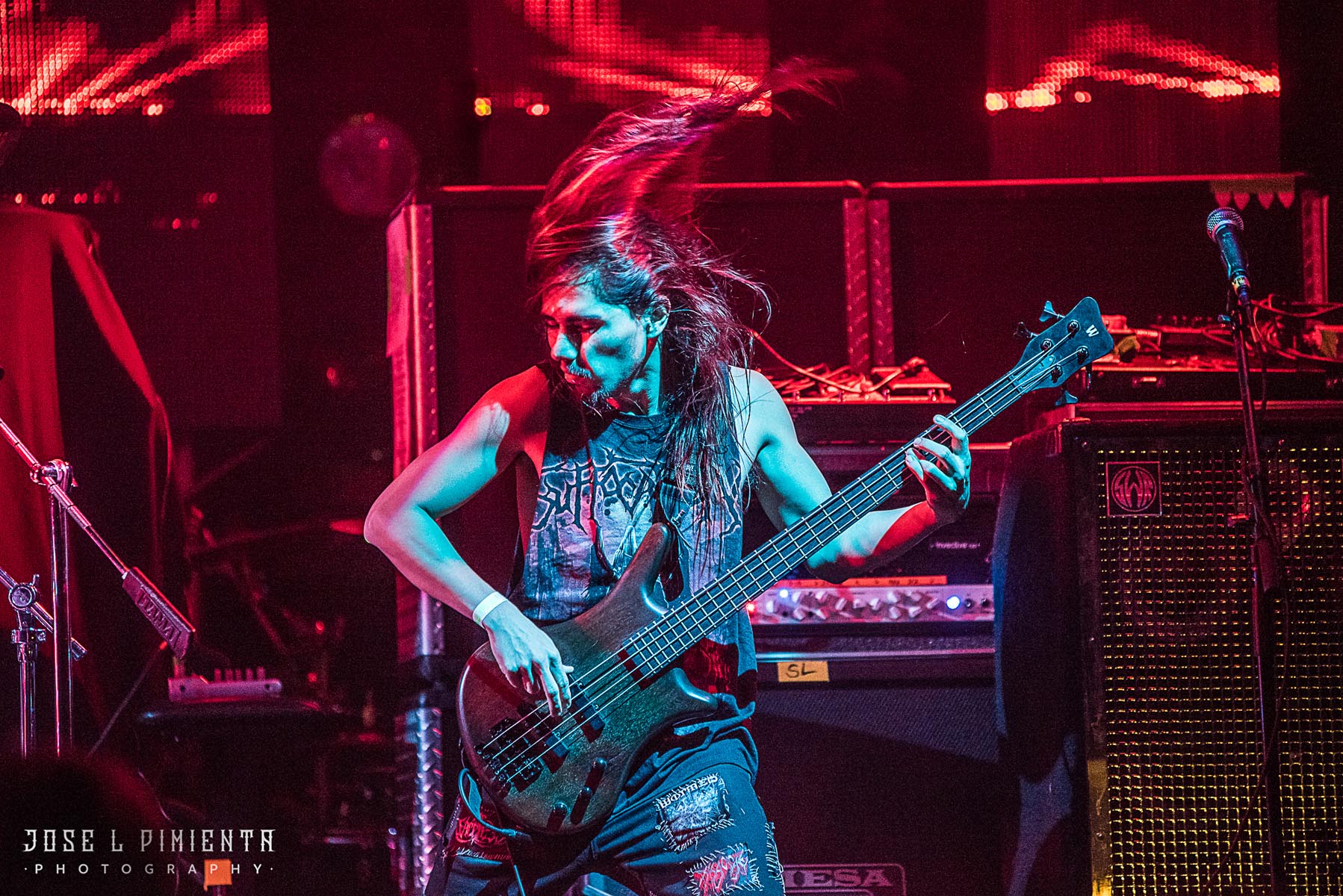 After a short intermission, we got the Harm’s Way on stage, hailing from The Windy City. They deserve a lot of recognition for their resilience and dedication. Back in September, their gear trailer was stolen in Vegas as they were starting the Total Retaliation tour with Terror and Backtrack, and despite the huge setback, they persevered, receiving an overwhelming support from their fan base and their peers. Harm’s Way’s performance was energetic and full brazen power, fueling the mosh pit with highlight tracks like “Human Carrying Capacity”, “Mind Control” and “Dead Space” from their 2018 album Posthuman.

Founded in St. Petersburg, Florida in the year 1997, Hate Eternal is the brainchild of extreme metal luminary Erik Rutan, well-known in the extreme music world for his involvement in countless landmark metal albums from the likes of Belphegor, Cannibal Corpse and Goatwhore. A charging death metal juggernaut, these guys took the stage with their trademark high-velocity assault of dizzying ferocity combined with wide-range dynamics, and skull-crushing brutality, palpable in songs like “King of All Kings”, “I, Monarch” and a couple of recent tracks ones from their last October record Upon Desolate Sands. Their combination of blast-beat drumming and plummeting heavy guitar riffs poured more gasoline on the mosh pit, turning the front rows into a lively amalgamation of clashing human bodies. 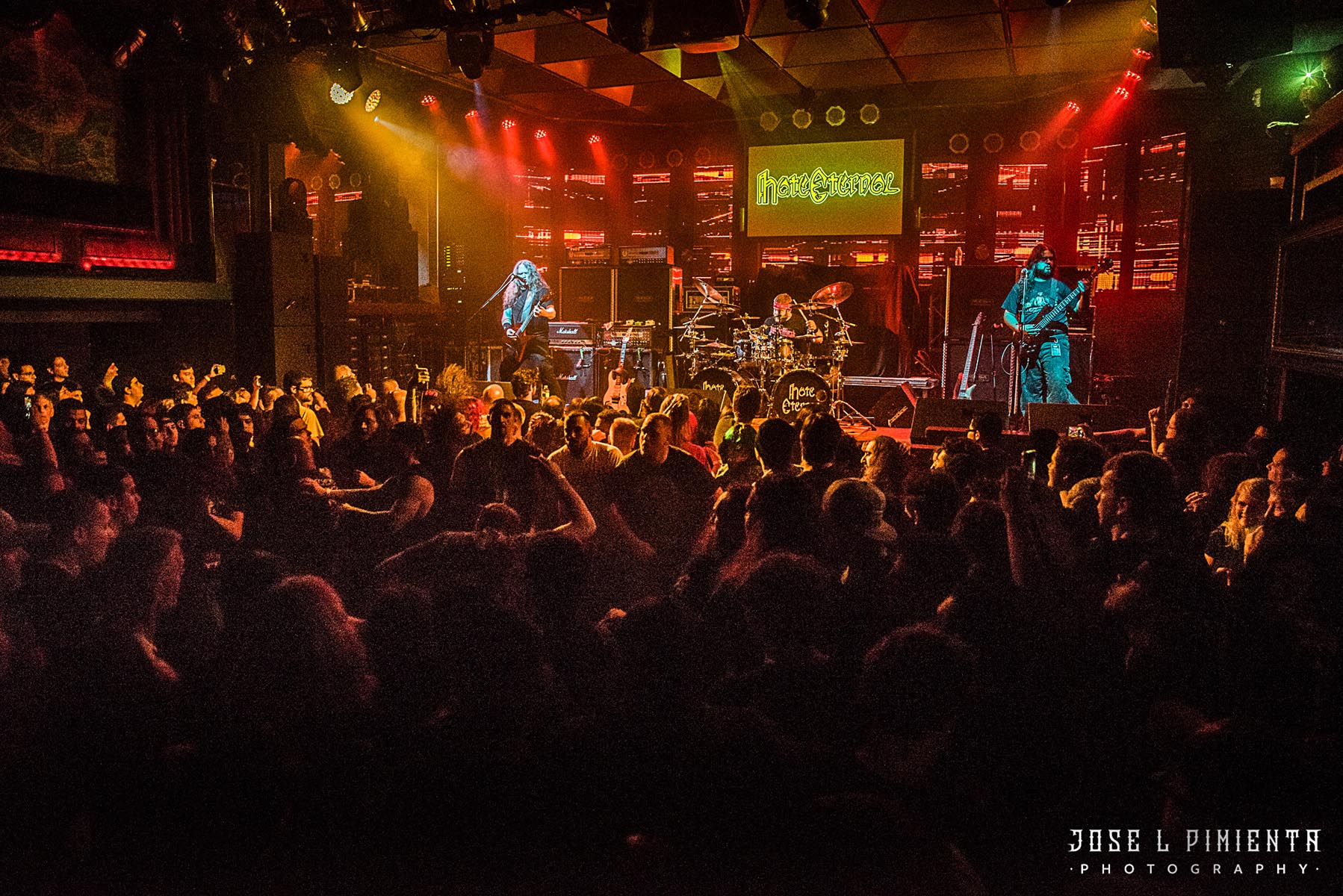 The most anticipated moment of the night came with the appearance of the Tampa death-metal stalwarts: Cannibal Corpse. It was the last date of the tour, supporting what the critics have hailed as their most raw, focused, tightest and catchiest record – If catchy is a word you can apply to the death metal music ?. Ready to demolish Culture Room’s floor, they kicked off the night with the single “Code of the Slashers”, sporting some vile, lurching passages that play ominously off against bloodthirsty thrashings. A true relentless barrage of ferocious music Cannibal Corpse characteristic musical inhumaneness creates a unique atmosphere, and concertgoers revel in the sonic assault by cutting themselves loose, draining the daily life stress out of their systems by moshing and headbanging like maniacs.

Charismatic and humorous vocalist, George “Corpsegrinder” Fisher was his usual self, engaging the sweaty audience and increasing the excitement throughout their performance, also stating that the interaction with the crowd reminds him every time why they keep going strong after 30 year. After a long set, that maintained the insanely high standards the band have long held themselves combined with a great diversity in dynamics there is never a let up in intensity, the crowd was still hungry for more. George joked saying they were feeling the giving holiday spirit, and they unleashed additional sickening tones designed to devastate everything with “I Cum Blood”, “Make them Suffer”, “Stripped, Raped and Strangled” and “Hammer Smashed Face”.

That Cannibal Corpse have carved out a career spanning almost three decades is testament to their work ethic, innovative songwriting, passion and devotion to extreme music, and this night was an astounding finale for an absolutely face ripping tour. We look forward to seeing Cannibal Corpse again; it is always a great time and unbelievably claiming for everyone in attendance.

Bringer of Storms / King of All Kings / What Lies Beyond / All Hope Destroyed / Haunting Abound / The Stygian Deep / Coronach (Played over PA) / Upon Desolate Sands / Nothingness of Being / I, Monarch