One question I get asked a lot by my friends from outside of Canada is “what do you do on a weeknight in Toronto?”. I always say it depends on a number of factors: your age, your interests, and much like anything in the Great White North, it depends on the weather. If it’s February, you generally stay indoors, feel miserable and bitch about the snow. On the summer months though, even if work is tough, or if life’s grabbing you by the throat, you go out and have fun: have dinner at a patio, have a drink in one of our breweries, or go see one of the many concerts crammed in our calendar between June and August. Last Wednesday I chose the latter, and went to check out G. Love, Blues Traveler and moe. at the Rebel Club. Currently on a co-headlining 21 city tour of North America, Blues Traveler and moe. have found an inventive way of sharing the stage. Each of the shows has a meaty filling, with members of both bands alternating on stage, as they perform each others songs and covers. The addition of G. Love is the cherry on the cake, as he also joins the jam and opens the show with his blend of folk and rap on acoustic guitar.

I arrived at the Rebel Club at 6:30pm, only to find out that G. Love’s acoustic set had already started. The highlights of his performance were “Cold Beverage”, a hit from his band G. Love & Special Sauce, the Canned Heat cover “Going Up the Country”, and the slow tempo of “Baby’s Got Sauce”.  G. Love opted for a stripped bare approach, with only him on stage showing his prowess on acoustic guitar and harmonica, and won the initially skeptical crowd at the end of the show.

I still remember the first time when I heard about Blues Traveler. It was the mid 90’s, and I used to spend a lot of time at one of my friend’s house in Petropolis, a small town in the state of Rio de Janeiro, Brazil. One afternoon I got there and he said “dude, you gotta listen to this – this guy is the Eddie Van Halen of harmonica!”. I checked it out, and my eyes popped out just like his, after one minute of the song “But Anyway”. I was sold immediately! And here I was, twenty years later, waiting for their set to begin. I had a chance to speak with die hard fans who have been following this tour since the first dates in the U.S., and I knew I was in for a treat. Just like The Grateful Dead or Pearl Jam, no Blues Traveler show is the same. 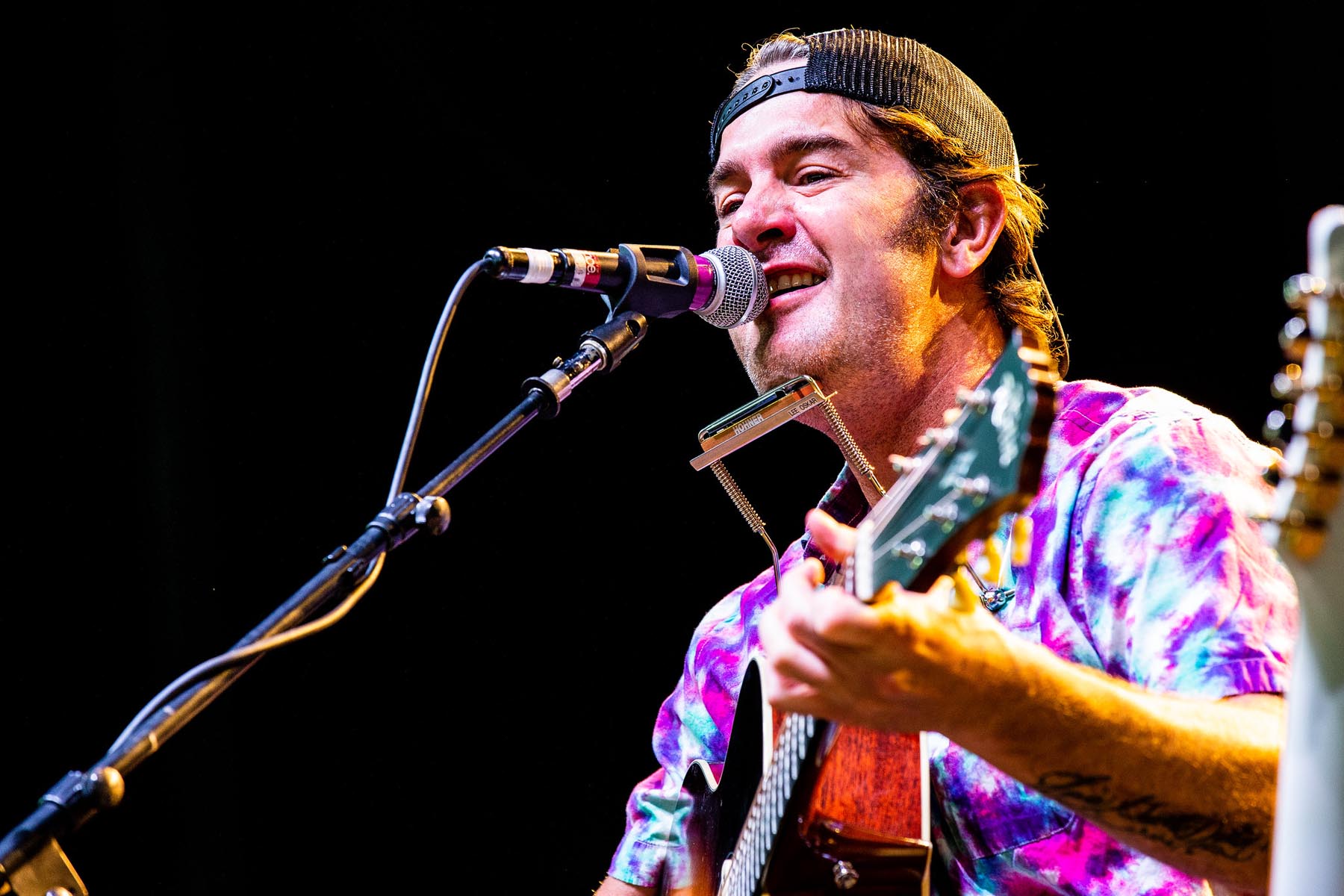 John Popper and his band entered the stage with “Things Are Looking Up”, from 2012’s Suzie Cracks the Whip. It was followed by “Back in the Day”, from 2001’s Bridge, two very unusual choices. With a huge catalogue, they’re never shy in picking up deep cuts. They threw a bone at the Canadian audience, with an excerpt of “Canadian Rose”. Front-man and harmonica virtuoso John Popper has a commanding presence, and humored the crowd with several touring anecdotes. One of them was about how he wrote the beautiful ballad “Ode from the Aspect” under the influence of mushrooms. On another humorous moment, he advised the audience to “always tip the bartenders, because they’re there before you know they know you know”. Does it make sense? I don’t know, but with the amount of cannabis consumed by the audience on the night, it didn’t really matter.

Another similarity between Blues Traveler, Grateful Dead and Pearl Jam is the room they leave for lengthy jams. Tonight’s highlights were Tad Kinchla’s bass solo, where he played with echo and many other effects, and Ben Wilson’s keyboard solo, with the use of a talk box, which culminated in the acclaimed “Carolina Blues”. The reggae-tinged “When You Fall Down” was another highlight of their set, and perennial hits like “Runaround” and “But Anyway” were of course very well received. The proceedings were closed with the emotional “The Hook”.

Sting did a few tours in recent years with Paul Simon and again with Peter Gabriel where they shared the stage on and off throughout the show, but tonight, Blues Traveler and moe. took a different approach: sandwiched between each of the individual sets was a revolving door with multiple combinations of members of both bands. Tonight, this started with moe.’s Al Schnier on mandolin and John Popper performing a stripped and gripping rendition of Blues Traveler’s “100 Years”. The Irish-tinged and folksy “New York City”, sung by moe.’s Rob Derhak came next, and the first appearance of the charismatic bass player was one not to be ignored, especially after his battle with oro-pharyngeal cancer in 2017.  Up next was the Grateful Dead classic “Casey Jones”, a song that was practically designed to be sung for a stoner type of crowd. This perfect summer tune had G. Love and John Popper trading licks on harmonica and laid back solos from moe.’s Chuck Garvey and Blues Traveler’s Chan Kinchla. The collaborative set was closed with an heartfelt rendition of “No Woman, No Cry”, with all members of both bands on stage. 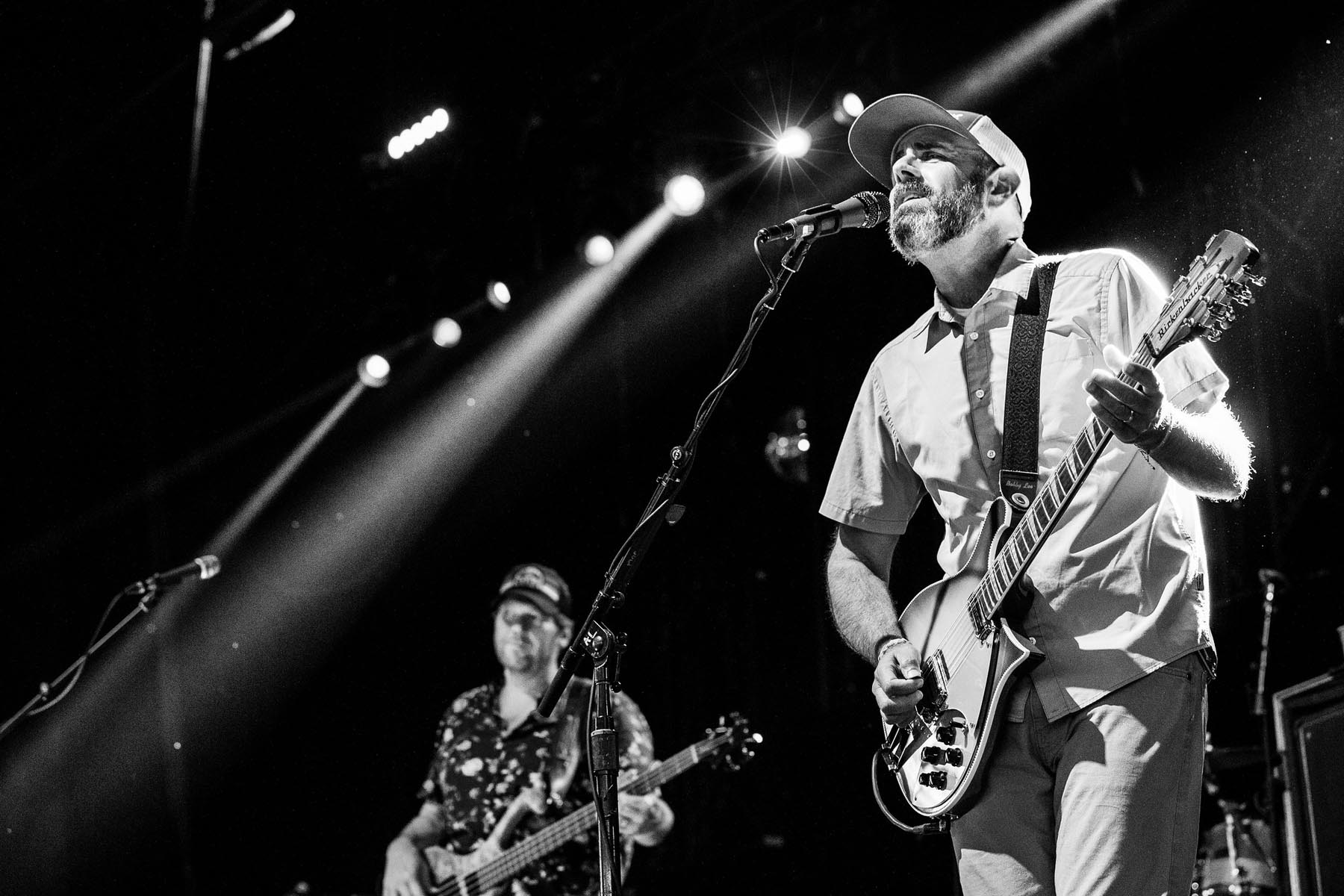 And then came moe.’s set, of which I had no idea what to expect. They kicked things off with a double dose of 2007’s The Conch: the self-referencing “The Road”, sung by Al Schnier and with an amazing performance by Jim Loughlin on xylophone, and the funky “The Pit”, with Rob Derhak handling vocals. Their set flowed like an hour long jam, with little or no interruption between songs, and several twists and turns which kept things fresh – I literally could listen to their songs for hours on end without getting bored or feeling the need for a change of pace. Stylistically, moe. cover a lot of ground while keeping their folksy, bluesy Americana roots intact, and the off-kilter knob stuck on 11.

The show progressed with another familiar double punch: “Defrost” followed by “Akimbo”. “Down Boy”, another number from The Conch, was probably the most standard sounding song on the set, and definitely a high point. The chorus “I never was sad/I never got down/I was relieved/’Cause I was so tired” was sung in unison by the crowd. Coming full circle, the band return to the opening song “The Road” to close the main set. A very emotional rendition of the hard hitting break up song “Deep this Time” closed things off on the encore, leaving smiling faces throughout the crowd.

With still a handful of dates to go on this current tour, G. Love, moe. and Blues Traveler showed that this bill is one not to be missed under any circumstances. In fact, due to the improvisational nature of all artists involved, I would recommend anyone to watch several shows, since no set-list is the same, and no song is performed the same way twice. And I’ll finish this review with a request: would it be too much to ask for these bands to come back again during winter to keep us warm here in Toronto?