Former Yes veterans Jon Anderson, Trevor Rabin and Rick Wakeman finally took the stage at The Seminole Hard Rock Live, in Hollywood Florida, exactly a week later than the initially planned show which would have served as the beginning of their worldwide tour dubbed “ARW: An evening of Yes music and more”. The arrival of hurricane Matthew to the east coast caused the original tour date to be postponed, increasing the fans expectations for the event. Since they last played together in 1990 on the highly successful YES Union Tour, there have been various hybrid versions of the band, yet none featured the iconic voice of Jon Anderson, the outstanding guitar talent of Trevor Rabin, and the keyboard wizardry of Rick Wakeman. Singer Anderson co-founded the group back in 1968, and other than two brief departures, remained their frontman until his seemingly permanent exit in 2008. Wakeman’s keyboards helped define the band’s sound during its ’70s progressive rock heyday, while Rabin’s guitar work helped bring Yes to their highest commercial peak in the ’80s with more compact, pop-leaning songs such as “Owner of a Lonely Heart.” Apparently the idea of this reunion was long in the making, as Rick Wakeman officially summarized “Trevor and I have wanted to play Yes music together since The Union Tour, and as for so many of us, there is no Yes music without Jon. The ‘Holy Trinity of Yes’ is, for me, very much a dream come true.” 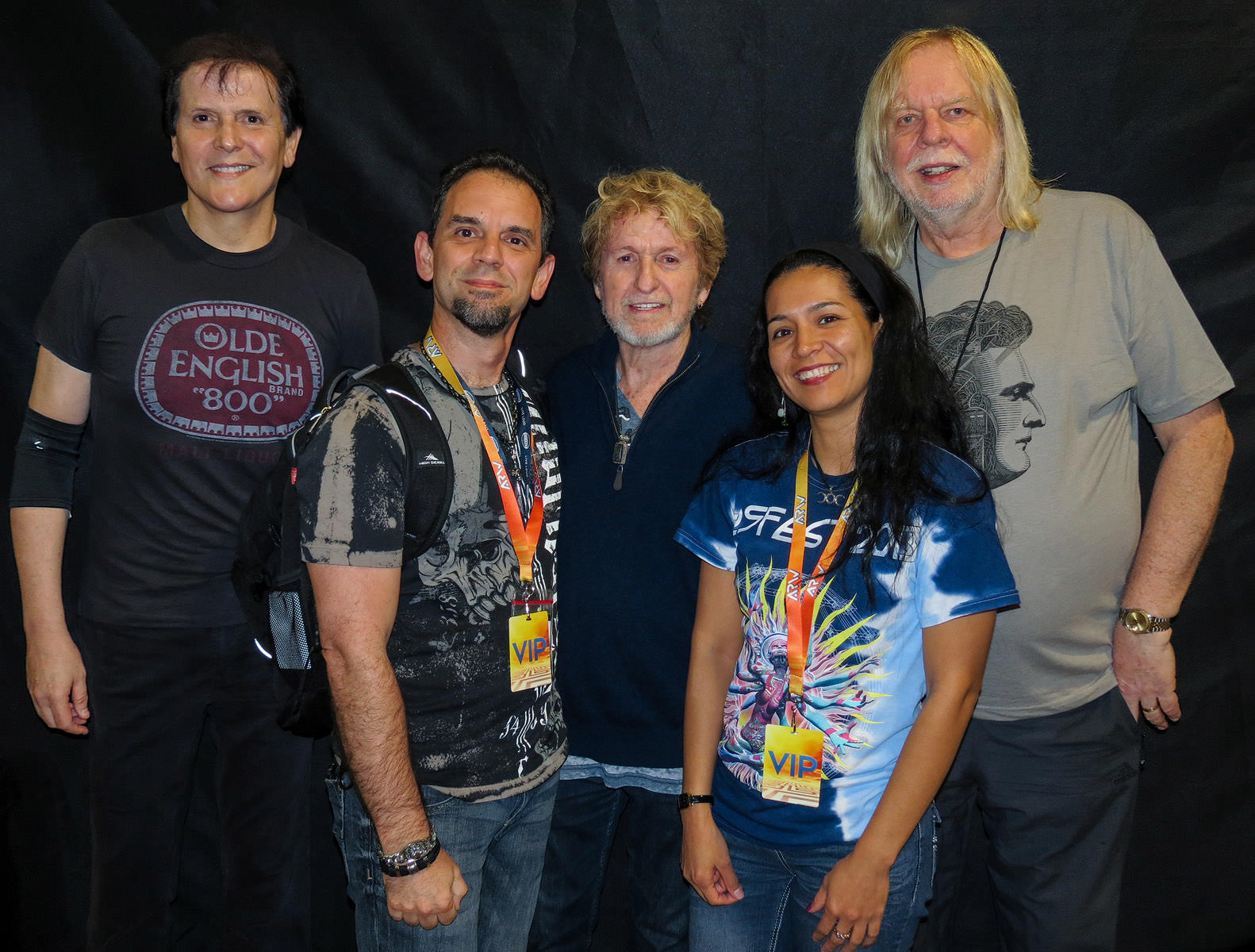 My wife and myself with Trevor Rabin, Jon Anderson and Rick Wakeman

My wife and I had recently witnessed Anderson’s magical stage presence during his tour with French prodigy violinist Jean-Luc Ponty (The Anderson-Ponty Band) and this time was no exception. Crowned “Prog God” recently during world renowned Prog Awards, Jon is a truly incredible musician and nothing short of a living legend. He’s 71 years old, nonetheless he’s still one of a kind band leader, with a charisma and energy many much younger frontmen would envy. His undeniably recognizable voice have stood the test of time admirably, and easily weaved the gentleness of Yes melodies and harmonies remaining clear and strong throughout the almost two hours performance. The voice is the weak link in many classic rockers, and I don’t know really know what forces Anderson have conjured to preserve his like that. He addressed the audience between songs and even joked when introducing a stunning version of “And You and I” by saying that it was “… a song from many many years ago…I think we were all children then!”. Wrapped in his customary long cape, Wakeman stood at his semi-circle bank of keyboards and synthesizers leaving his majestic fingers to dance over the keys, adding so many textures, colors and finesse like no other keyboard player in the world could do. Particularly noticeable was the addition of his own flavor to the 80’s smashing hit “Owner of a Lonely Heart” (a song from an era in which he was not part of the band) which sounded wonderfully reimagined. And as for Trevor Rabin, his guitar playing can only be described as fantastic. After almost two decades of not being on stage he danced his way through the complex songs with so much ease and confidence; he was definitely enjoying the show as much as any of the presents in the audience. It’s also noteworthy to remark the rhythm section comprised by veteran bassist Lee Pomeroy and drummer Louis Molino. Pomeroy’s powerful bass lines were faithful to the originals, paying an authentic homage to the greatness of the late Chris Squire, while Molino’s drum beats and true time-keeping served as the perfect counterpart and backbone for such a refined and intricate music catalog.

The set list for the evening was varied and contained mainly classic from the seventies, with a fair share of picks from the Rabin era (even when they completely omitted a great album like “Talk” from the song selections). Some highlights of the night were the “Lift Me Up” off the Union album where Trevor sang impeccably leaving no doubts as far as how he can still deliver those high notes; a inspiring rendition of “I’ve seen All Good People” including fantastic and flawless vocal harmonies by Pomeroy and Molino; “Heart of the Sunrise” where the whole band sounded as tight as ever without missing a single note in such a tremendously complicated song, and “Owner of a Lonely Heart” during which Wakeman and Rabin ventured into the ecstatic crowd while playing their instruments, a moment followed by an unanimous outcry of joy and a rush of applause from the passionate and adoring audience.

It was certainly a night to remember for those lovers of Yes music like me. In my opinion what these three wonderfully gifted musicians bring to the table now touring together is priceless. The passion and reverence this band offers to their rabid fan-base is incredible, and considering Steve Howe is nowadays the only member from the Yes’ golden still in the current Yes line-up (Steve did not play in their first two albums, but he has been on it for so long that no one would consider him otherwise), I’d dare to say that Anderson, Rabin and Wakeman are now genuinely more YES than the band itself.