As unlikely as it may sound, sometimes incredible things happen on a Wednesday night. It takes something extraordinarily wonderful to melt away the soul-crushing monotony of the week’s center, the point where exhaustion sets in and longing for the weekend begins in earnest.  The rare Wednesday evening miracle of October 30th took place in Richmond, Virginia, in a discreet venue buried beneath a towering series of overpasses and railroad tracks. Allegeaon, on the twelfth stop of their Apoptosis North American tour, settled themselves comfortably on a small stage that matched the modesty of the venue, yet played as though their lives depended on it.

The Apoptosis tour highlights the trio of Paladin, Inferi, and Allegaeon on the second leg of Allegeaon’s headlining celebration of their fifth full-length studio album, “Apoptosis.” With the tour running approximately a month long, the Denver natives plan to visit more than seventeen cities by tour’s end to show off not just the latest and greatest music they have to offer, but to give fans an experience that they’ll never forget.

Opening the night was supporting act Paladin, who had just hit the big stage at ProgPower XX in early September, and stood out as the only power metal act on the bill. Their time in the bright spotlights of Atlanta’s Center Stage seem to have only enhanced their confidence as performers, as they played with unwavering certainty to the crowd gathered in the dark comfort of The Canal Club. In May 2019, Paladin released their first full-length album titled “Ascension,” from which they built out their impressive six song set. Cold blue and white lights washed over the band as they dug in their heels and put their all into shredding through a set that pulled together speed and awe in dazzling beauty. With songs inspired by video games such as Zelda and Chrono Trigger, each song was delivered with the unbridled excitement of young musicians carried on the wings of their own adventure. They wore the spotlights like armor, and pushed through their set with the charisma of seasoned rockstars. 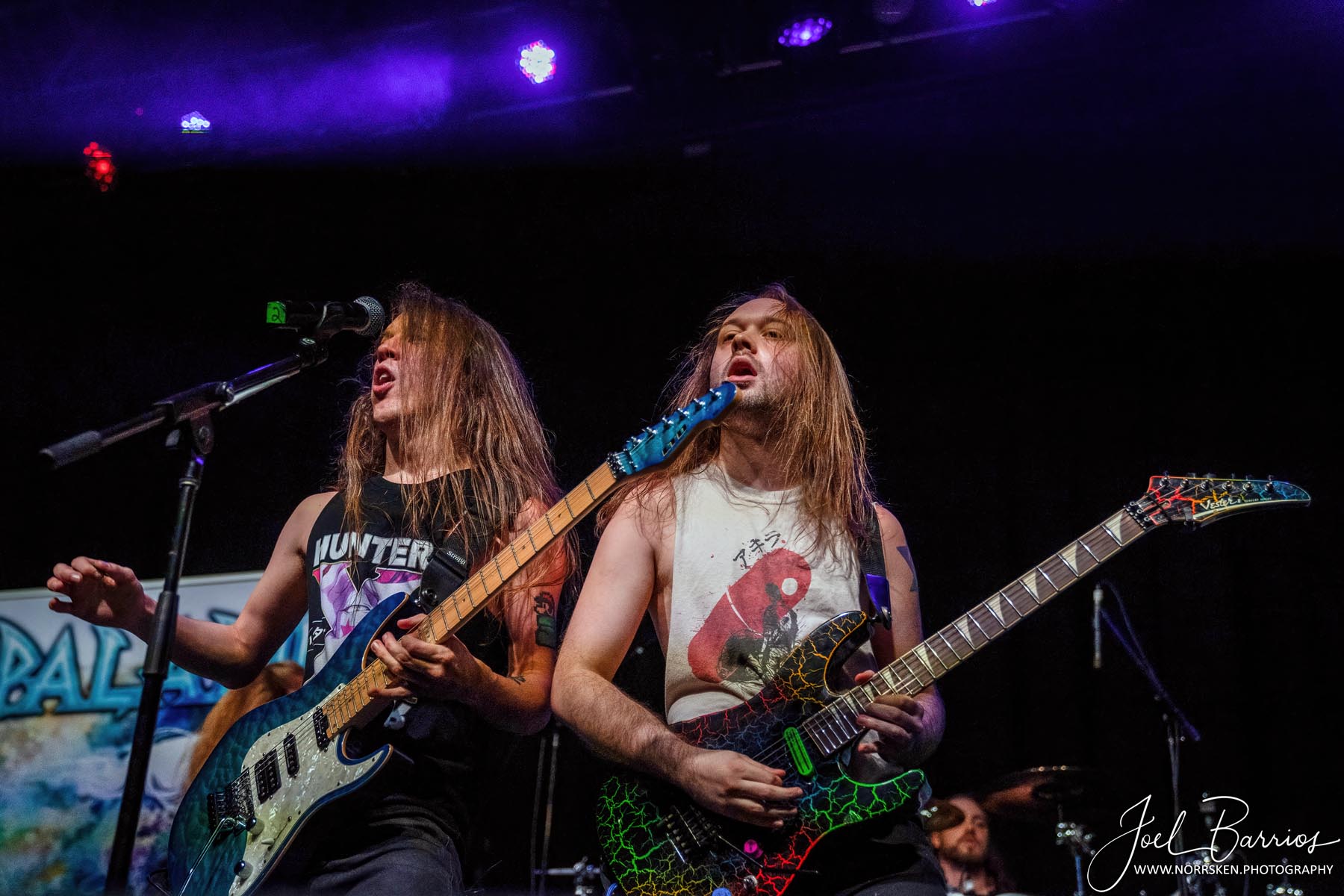 Singer and guitarist Taylor Washington seemed to have two distinct personalities on stage; the first was the cheerful comedian, merely happy to have the opportunity to play and banter with the boisterous crowd. But the second his fingers hit their mark and each song kicked off, he transformed into a beast tearing through riffs with masterful precision, his voice soaring on high notes that could pierce the sky. Washington took pause before the penultimate track of the set, “Shoot for the Sun,” and noted with a blush and a smile just how difficult the song was to play. No matter the shy preface, not a single member missed a beat through the song’s duration, and they proceeded to conclude the set victoriously with the track featured in their latest music video, “Carpe Diem.” Immense credit is also due to drummer Nathan McKinney, who played songs both complex and physically demanding beyond words without the smile ever dropping from his face. Infectious joy brought the light and excitement of power metal to a stage about to be graced by the brutality of death. Their talent brought a meager crowd lurking at the bar right up to the barricade, and certainly earned them some new fans. 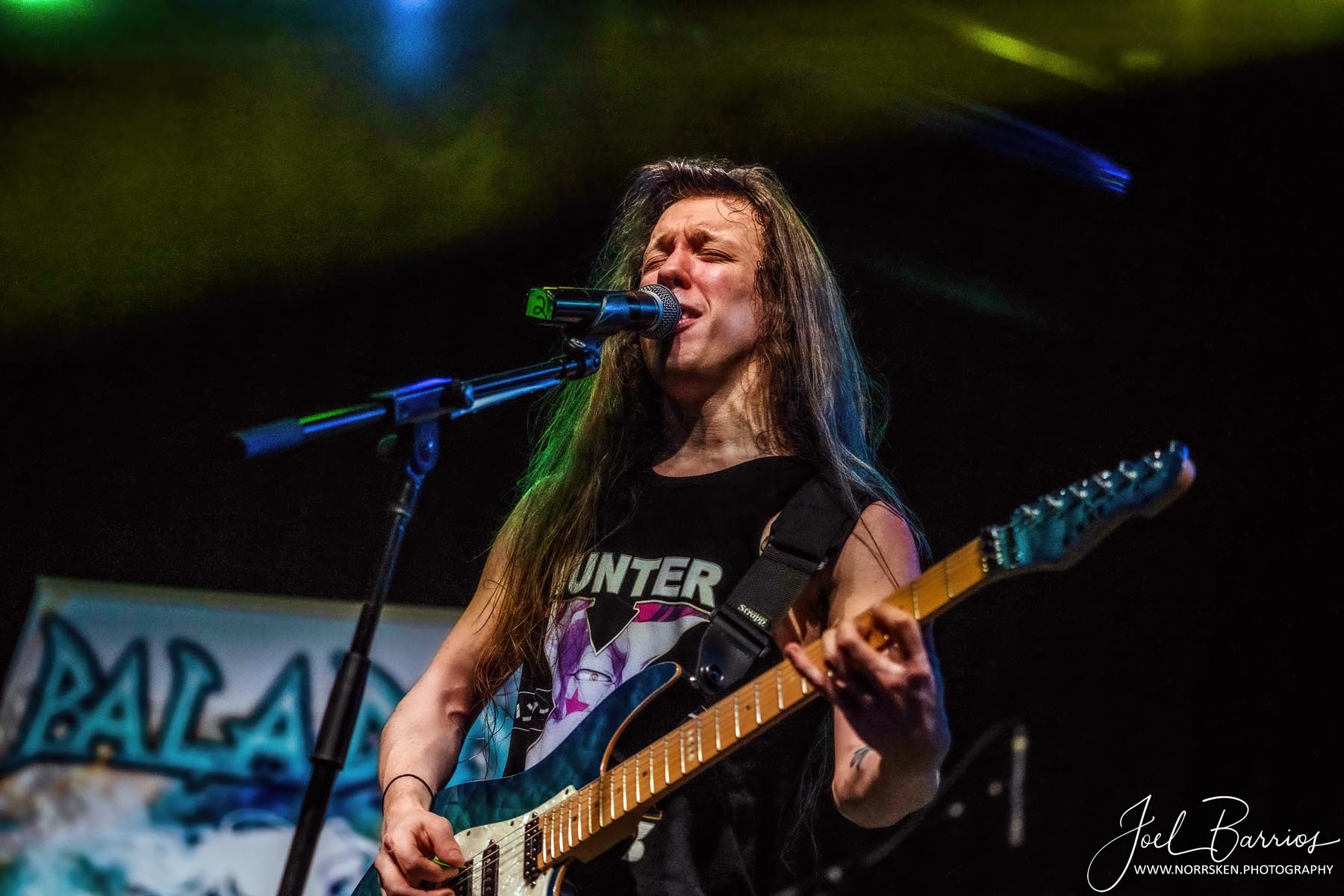 Following in what seemed like breathless seconds afterwards was Inferi, a Tennessee-based tech-death band with four full-length albums to their name. With a mature discography and experienced musicians at their helm, Inferi now employs the vocal talents of Steve Boiser, the vocalist of their label’s sister band Equipoise. Their latest album “Revenant,” released in 2018, employed the full strength of the band’s technical capabilities. These same abilities that shone in polished studio work held up for a live audience, laid out plainly for all to see. Manufacturing such expertise and skill for a studio album of such a high caliber is impressive on its own, but to see the same reproduced live on stage was short of a miracle. Inferi’s last remaining founding member, guitarist Malcolm Pugh, lingered out of the spotlight for the set’s duration, focused wholeheartedly on the guitar held in his hands. While his deep growls occasionally emerged to add rich depth to some of the band’s signature tracks, it seemed that there was an understanding to let Boiser’s charisma lead the show, particularly on a stage where each band member was confined to a few square feet of space.

Leaning out over the barricade, mic cord wrapped around his hand, Boiser screamed to the roaring crescendo of “Behold the Bearer of Light,” but a bright smile still lit up his eyes. When he wasn’t singing, he commanded the audience with hands outstretched as though conducting an orchestra, calling for all present to join in summoning the full strength of Inferi’s dark, mystic fantasy. His outpouring of joy was able to manifest in the distinct wails that filled the venue from wall to wall, musicians drenched in green and purple lights that spoke of something menacing. In Boiser’s words, all that stood present that night were unholy, concluding the night with fan favorite “Cursed Unholy.” Technical guitar work aside, Inferi stood out in the fact that not once did their drums waver, an impressive feat for the speed and progressive technicality required by the expansive set. The rafters ate their calls for beasts of the underworld, and the audience was left both winded and yearning for more. 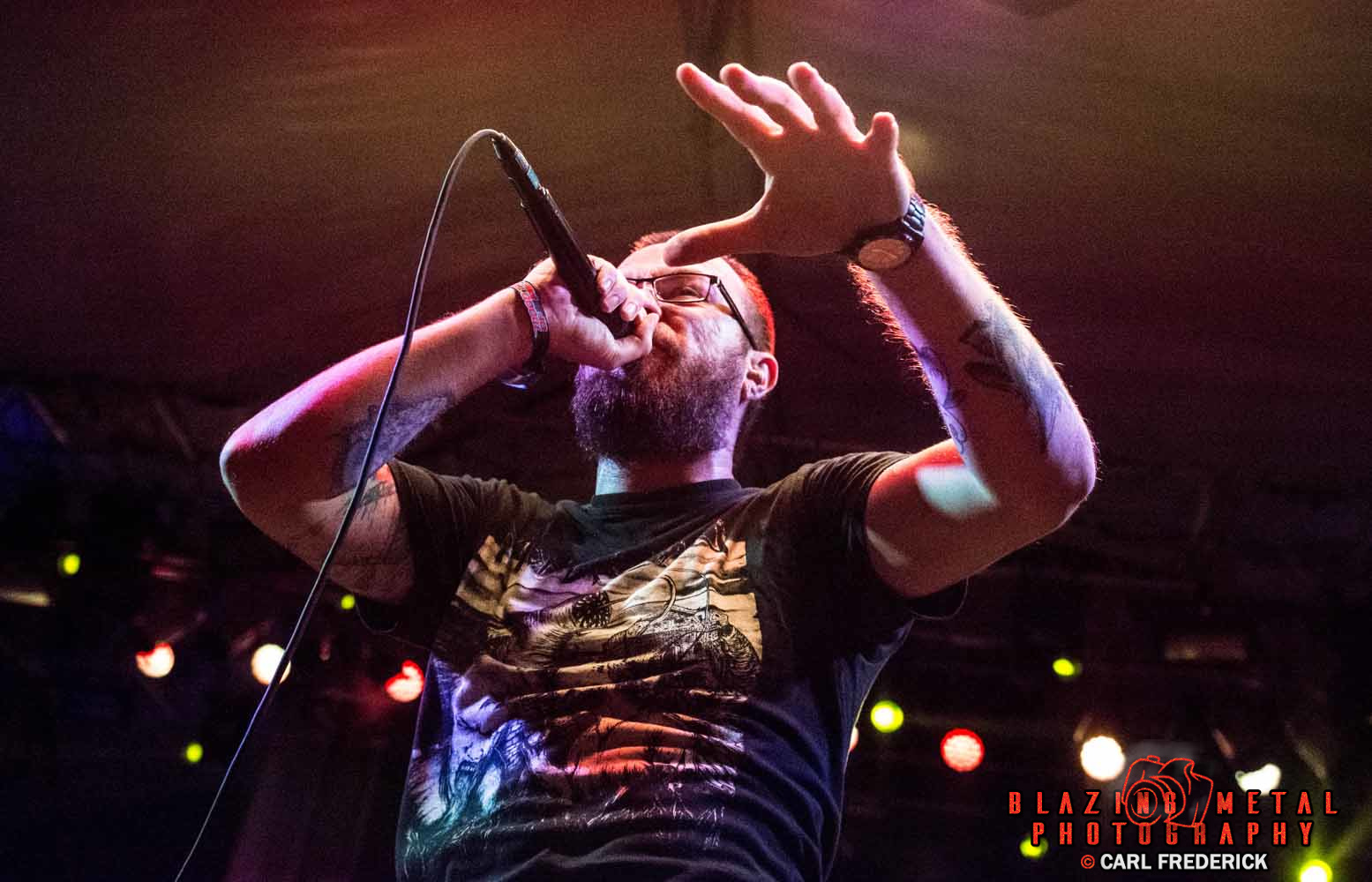 Of Allegaeon’s original members, only guitarist Greg Burgess remains. There was no doubt that he was more than comfortable out on the road, as he effortlessly took charge of the band’s set change with practiced grace. Even as he held spare pieces in his mouth and ran cables along the ground, he chatted with the audience at the barricade, teasing them with an easygoing smile. It was hard to believe that the same man, just minutes later, took to the stage and played at blistering speeds for the better part of an hour, performing musical feats that would have left mortal fingers aching. Smoke poured out from the front of the stage, soaking the band in a white mist from the start of their opening song “Parthenogenesis.” Strobing white and purple lights made it appear as though lightning crackled between them, giving authenticity to the effect that they were beasts rising from a terrifying storm. As the set progressed, leading from older material into tracks from their latest album “Apoptosis,” the lights shifted in their hue, changing to a red that shrouded them in a dark, nocturnal warmth.

It seemed as though the instruments on stage had more strings than the audience had members, but there was no diminution of effort or enthusiasm from any member of the band, who pushed at full throttle from start to finish. The way that they responded to audience engagement and asked for enthusiasm in return matched levels that would be observed at a sold-out stadium. Bass player Brandon Michael prowled from one end of the stage to the other, a menacing (but somewhat implausible) scowl on his face, mouth parting into a roar as the songs reached their deafening peaks. Burgess also roamed the stage freely, stepping lightly over piles of cables with the grace of a dancer, while performing with a precision that had remained unrivaled throughout the night. Most importantly, the live mixing let each of the guitars shine through above the often suffocating presence of amplified drums. 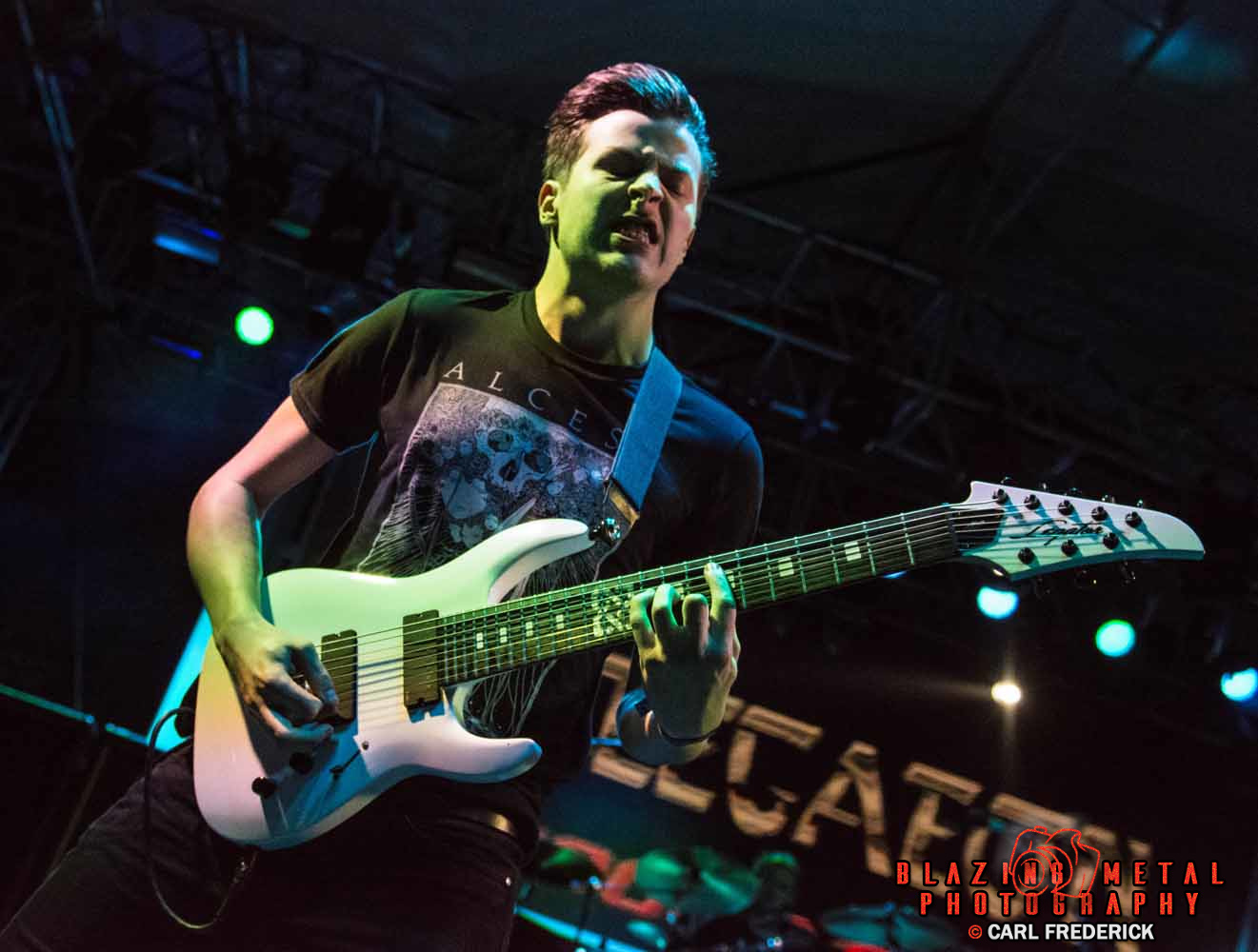 While their live performance of incredibly complex technical death metal was commendable in and of itself, there was even more awe to be found in the consummate professionalism that the band maintained throughout multiple hiccups of the night. When their smoke machines and front lighting went out towards the latter half of their set, guitarist Michael Stancel knelt down to fix them single-handedly and with expert knowledge. No matter the unexpected outages, vocalist Riley McShane didn’t so much as flinch, still pouring his heart into the delivery of each song. Towards the end of their set, no matter that their lights had shifted to a more atmospheric mood of red and orange, the addition of strobing lights seemed to come from all sides of the venue. Shortly after this unexpected additional lighting, the band took pause at the end of what would be their last song of the night, and apologized to the members of the Fire Department that had arrived to the call of what had apparently been an active fire alarm.

The venue was small, with low-hanging wooden rafters and a carpeted floor eating up sounds that would have otherwise echoed throughout the lonely concrete and cracked cobblestone that sprawled for blocks in every direction. It was a Wednesday night, yet folks had travelled from the far reaches of South Carolina and West Virginia through the pouring rain to watch Allegaeon play like demigods through a curtain of smoke and pulsing lights. And even as the show was brought to a somewhat comedic halt, it was undoubtedly a celebration of the incredible draw that Allegaeon has in the niche of tech death. Most certainly of all, it was a fitting performance for the magnanimous strength of “Apoptosis” and the skills of the musicians that took the stage.