The Hendrix of Jazz. This is what I have heard people call Al Di Meola. He is one of those musicians that have built a career that is expressive and expansive, and has become an international musician that transcend time and space with his playing. He’s been blessed with ageless genes, both in appearance and performance, and I could go on and on for pages talking about his accolades. And if that wasn’t enough, he’s also father of three beautiful daughters, one being just a baby, and we talked about that bit at the end of the Meet and Greet session before his show in Fort Lauderdale last weekend. I told him I had four daughters and he smiled and me and said “I’m 62 years old and I’m enjoying being a father now more than ever, because the relationship with the mother of my newborn daughter is fantastic. It’s like going through fatherhood from a complete new perspective”.

Around an hour later, when he walked onto the Parker Playhouse Theater displaying a backdrop of 23 of his album covers behind him (including Return to Forever and The Guitar Trio with John McLaughlin and the late Paco de Lucia); and approached the very edge of the stage holding his vintage black ’71 Gibson Les Paul electric guitar, the audience exploded in an unison cheering chant. We all knew we were going to witness a unique spectacle. 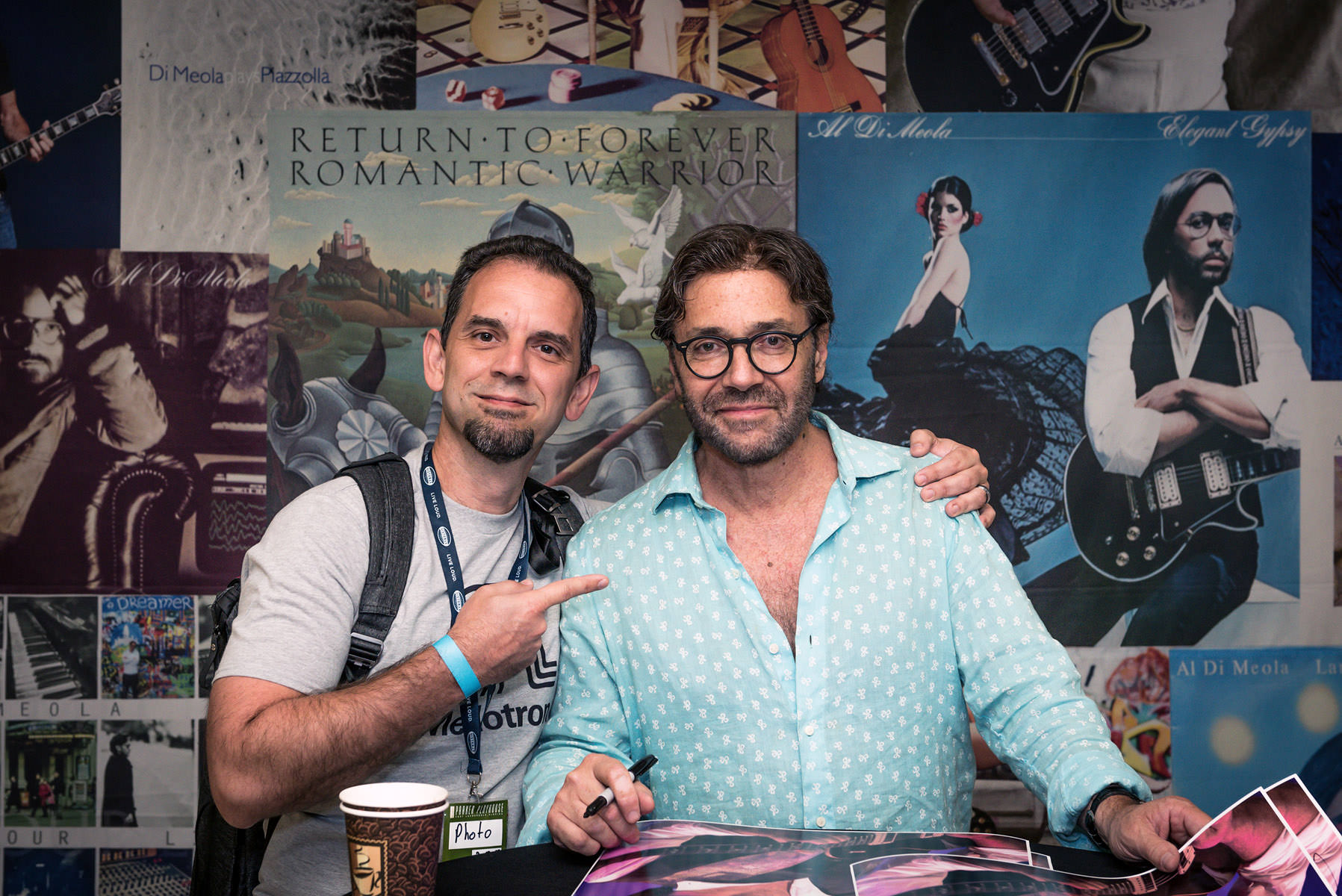 Al DiMeola and myself before the show

There’s something special and indescribable about Al’s playing, and I am not talking about the blistering speed his fingers move with. His compositions are rich in intricacy and colour: they shift from dark and dramatic movements featuring explosive, lightning quick electric guitar lines, to playful and syncopated passages and exotic melodies; and they always sound fresh, exciting, and forward thinking. Despite all his guitar flash, it’s as a composer that Di Meola really hones his craft. His songs are epic works, with subtle switch-back passages and rhythmically complex grooves, showcasing a playfulness and depth that sometimes get obscured by his eviscerating solos. I feel I’m running out of adjectives already, yet they fail to convey what you see in front of your eyes when he is commanding the stage.

Al’s band of Gumbi Ortiz (percussion), Philippe Saisse (keys and marimba), Joel Taylor (drums), Evan Garr (violin), Elias Tona (bass), and Luis Alicea (drums) provided hypnotic, invigorating, and unyielding rhythms that kept the crowd engaged for the more than two hours performance (divided into three parts: a one hour electric set followed by a 10 minutes intermission, then a 20 minutes acoustic set and then another 40 minutes electr set) of original compositions from his classic 70’s and 80’s albums, including the influential “Elegant Gypsy” record, which showcased his signature fusion of virtuosic electric guitar with Afro-Cuban rhythms, Flamenco, and Argentine Tango. Fan favourite tunes, like “Señor Mouse”, “Flight Over Rio”, and “Race with Devil in a Spanish Highway”, elicited rapturous responses and standing ovations from the audience throughout the show. One special moment that stormed the venue with electricity was when he cranked up a cover of Led Zeppelin’s “Black Dog” featuring Evan Garr wailing the Robert Plant vocal lines on electric violin. Garr, the latest addition to Al’s band, introduced himself to DiMeola as a walk-on during a concert in Toronto. He played Di Meola’s music for him backstage and Di Meola immediately made him part of the band.

Despite the fact this is instrumental music DiMeola was extremely personable between the songs. He managed to make the audience feel right at home, being very personal, joking and even talking about the birth of his third daughter. His respect for and the mutual admiration of his band mates was a testimony to their love of the music they created together. After receiving a thunderous ovation following his encore, he generously came back and played three additional pieces to a crowd that was on its feet. No one wanted the concert to end.

It was a vibrant, full of energy, and authentically beautiful show that will remain in our memories for many years to come. An truly amazing evening of one of the best music ever created.