Think about the most innovative new act or album you have heard in music in recent years. Not much, right? The music of Nightwish, infusing metal with elements of classical and opera? Or Ayreon, giving new meaning to “rock opera,” with its double-disc concept albums featuring nearly a score of world-class vocalists playing specific acting roles? What else is really different in recent decades? Tenacious D?

This is not to downplay the contributions of some who, in fairness, have tried to strap on their Chuck Yeager boots and push the envelope of bold new musical frontiers, to varying degrees of success. However, the fact remains that an adage in music production is that everything has already been done. For the most part, we are eating in a circle of musical food trucks, experimenting with fusions of existing culinary styles. Djent-math-death metal, or whatever it may be, or some Nth subgenre of metal with “core” somewhere in the suffix.

At this time, we turn our focus to two Pyramaze alumni, Jonah Weingarten and Matt Barlow, although the latter is better known for the power and range of arguably the very best of Iced Earth vocals. With Jonah and his mastery of keys, and Matt still commanding impressive metal pipes, the two sat down to do…. Not a metal album. No, this isn’t “Pyramaze Unplugged,” with Matt leaned up against Jonah’s Steinway for a lounge-style duet. The two set out to actually fuse the power and the emotion of Matt’s performances with Iced Earth, Pyramaze, and Ashes of Ares, and combine it with a cinematic soundscape that uses Jonah’s keyboard wizardry to paint a setting right out of Howard Shore’s “Lord of the Rings” score.

The first track comes in with a cinematic and slightly military march of snare and timpani, eventually building with piano melody and strings, to stop and pull back a silent curtain, and shine a focal spotlight on Matt Barlow delivering a low-key verse. As the vocals continue, the power increases, and the listener is treated to a classic layering of Matt’s powerful low-end paired with Matt’s famed higher register, and the instrumentation rejoins in phases until ultimately builds to a crescendo chorus. “From my Tower I see…. Through this pain and misery…” From there, the energy of the song falls and rises up again. Make no mistake, listen to this song three times and the chorus will still be with you hours later. 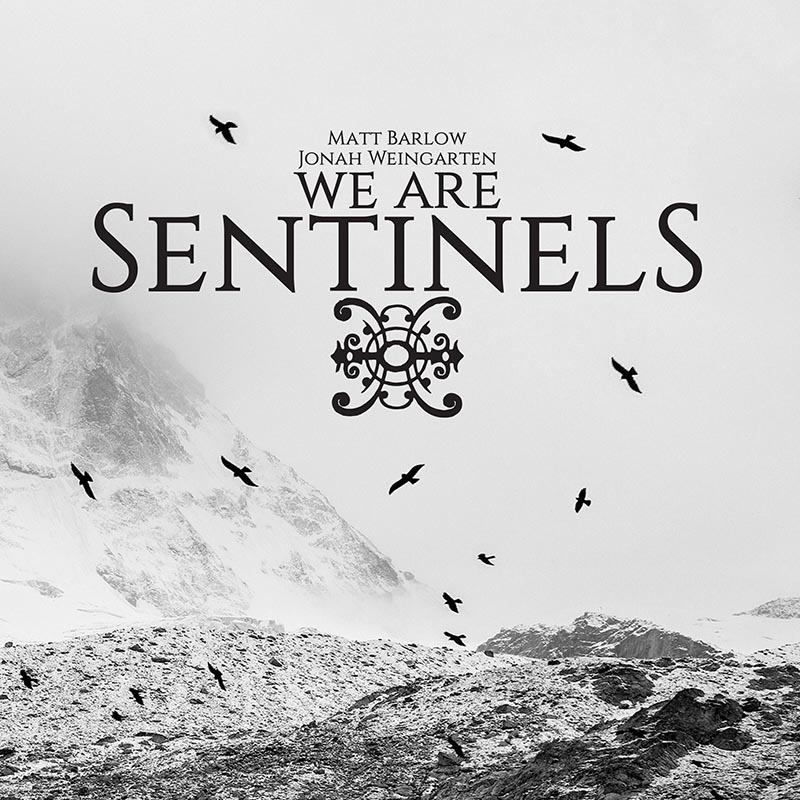 “We Are Sentinels” Album Artwork

The album continue with a poignant and introspective love ballad, “My Only Sin,” where the player in the song reflects upon whether finding true love is a sin, and if so, then so be it. There is some vocal layering here, and moments of synth strings driving the song along, but for the most part, it is a quaint piece made up of Matt’s sincere vocal delivery and a simple and lovely piano part. The third track, “Life, Death, Rebirth,” hits back hard. The Barlow vocals we remember from “Something Wicked” are still very much alive and well, and this song takes turns between reflective piano backing, and full-orchestra delivery of Barlow turning up the “God of War” voice to 11.

“Kingdom in Winter,” although not fully representing all there is to be found in this album, is a good sample, and was a reasonable selection for the music video, which can be found on YouTube and all the band’s social media. The video showcases Matt delivering a literal “Song of Ice and Fire,” from atop a snowy mountain, dressed as some high-fantasy legion general, where nearby Jonas shows off his inked arms, blizzard be damned. Still, it’s a solid song and good basis for an interesting video.

One of the more interesting songs is actually “Dreaming in Winter,” a moment to reflect on the examples we as adults set for our kids, and how our lives, our careers, our deeds, and our choices provide a roadmap for the next generation. As it says, “these gifts we give our children… they help them see into the future.” Aside from the intellectual reflection found in the lyrics, the song offers some beautiful piano playing, with several layers of Barlow interplaying to deliver a meaningful song.

The rest of the album, from “Battle in Winter,” through the final climax of “Soul on Fire,” continues to deliver the format set by “Kingdom in Winter.” This is not to say the rest of the album is more or less the same, it is just that at a certain point, words are insufficient to explain the nuance of what Matt and Jonah are doing here. These are epic cinematic scores with arguably the signature voice of Iced Earth taking command at the helm, delivering a performance that leaves no doubt he still very much “has it.”

Because we are admittedly all suckers for a great cover, it is worth mentioning there are two gems to be found on this record. One is Cinderella bemoaning the fact that you “Don’t Know What You Got,” at least until it’s gone. It’s a well-done track, and certainly much more timeless in this format, but the other cover is the real winner here: Ronnie’s immortal “Holy Diver.” Imagine the full fury of Matt Barlow’s pipes delivering the Dio classic with cello, piano, and timpani, complete with “Look Out!” The arrangement is stellar, and the whole thing is a real treat, well worth the price of admission.

The mix of the album (evaluated on powered Mackie monitors) is pretty much perfect. The instrumentation does, admittedly sound synthetic to a lesser extent, but that is the world of keyboards, even at their very best. The only way this album could sound any more “real” would be Jonah sitting at a Steinway in front of the London Symphony Orchestra, and Matt in a tuxedo. It is worth mentioning that this album takes a few listens to “stick.” As metal fans, we are unfortunately spoiled by albums that start with classical instrumentation and then explode into a raging inferno of distortion, electric bass, and double-kick drums. That inferno never happens here. Somehow, the album is all the more sweet for it. The album hits the street in July, and can be preordered at this location. Combining the epic soundscapes of full and emotive cinematic scores, elegant and beautiful piano melodies, a slight touch of metal, and the thundering and dynamic vocals of Barlow, We Are Sentinels is here to push boundaries and preconceived notions. Highest recomendation.

“We Are Sentinels” Track-Listing:

Usually, this is where we mention some similar acts, and say, “If you like X, you will really dig Z.” Unfortunately, there is really nothing quite like this X, but that’s what we love about it. However, if you enjoy Barlow vocals, Iced Earth, Pyramaze, or metal with any sort of symphonic movie-score angle, this will absolutely be your bowl of Cheerios. Be sure to give it a listen