Sometimes the best way to get out of a rut is to forsake all the latest fads and get back to what works and few bands have fought to regain their initial glory as Brazilian extreme thrash pioneers Vulcano. Cut from a fairly similar grain to fellow countrymen and early purveyors of things dark and morbid Sarcofago, they managed to make a strong showing in the mid-1980s after a stint as a straight up heavy metal act a few years prior, with some going so far as to hail their 1986 debut outing “Bloody Vengeance” as Brazil’s answer to Venom. As the decade in question drew closer to its conclusion, they would find their unique position giving way to a more textbook thrashing style akin to where Sepultura was headed at around the same time, which was met with mixed reactions. After folding tent in 1991 and sparing the world a lackluster rendition of the banal groove metal craze that would follow, it seemed as though this outfit would join Sarcofago in being yet another metallic casualty of the grunge explosion.

In contrast to their aforementioned compatriots, this quintet would find itself back at it thanks to a renewed interest in thrash metal at the turn of the millennium, unleashing a number of respectable studio efforts up until the close of the 2010s. Though nothing seemed to quite match the raw intensity that won many over in the band’s primordial days, their first foray of the 2020s “Eye In Hell” strikes a fair bit closer to home compared to anything since. Despite only featuring guitarist Zhema Rodero from this outfit’s formative era, this is an album that turns back the clock to the wild west spirit of black metal’s early first wave where it was a bit difficult to tell where said style ended and its near equally ugly cousins death and thrash metal began. It’s a bit clearer and slicker than the early offerings of Bathory and Hellhammer from a production standpoint, but the same spirit of vile primitivism is firmly in place, occasionally even paralleling some elements of the Scandinavian 2nd wave and the style’s subsequent adherents.

Everything about this album is concise and executed with a sickened middle ground between sloppiness and precision that parallels the archaic character of early Master and Possessed, but with the rawness and vitality of younger acts like Norway’s own Deathhammer. Bone-crushing thrashers like “Bride Of Satan”, “Evil Empire” and “Struggling Besides Satan” waste little time in raining chaos down upon the listener, featuring a sepulchral vocal display out of Luiz Louzada that’s raspy and garbled enough to rival Max Cavalera back during the “Morbid Visions” days, but with a slightly clearer presentation that could also be compared to Jeff Beccera at times, and all the high octane riff work to send any mortal man to the chiropractor for a needed neck adjustment. Alongside more blackened offerings like “Sirens Of Destruction” and “When The Day Falls”, there is no shortage of extreme moments to be heard despite the respective length of each song being fairly short and to the point. 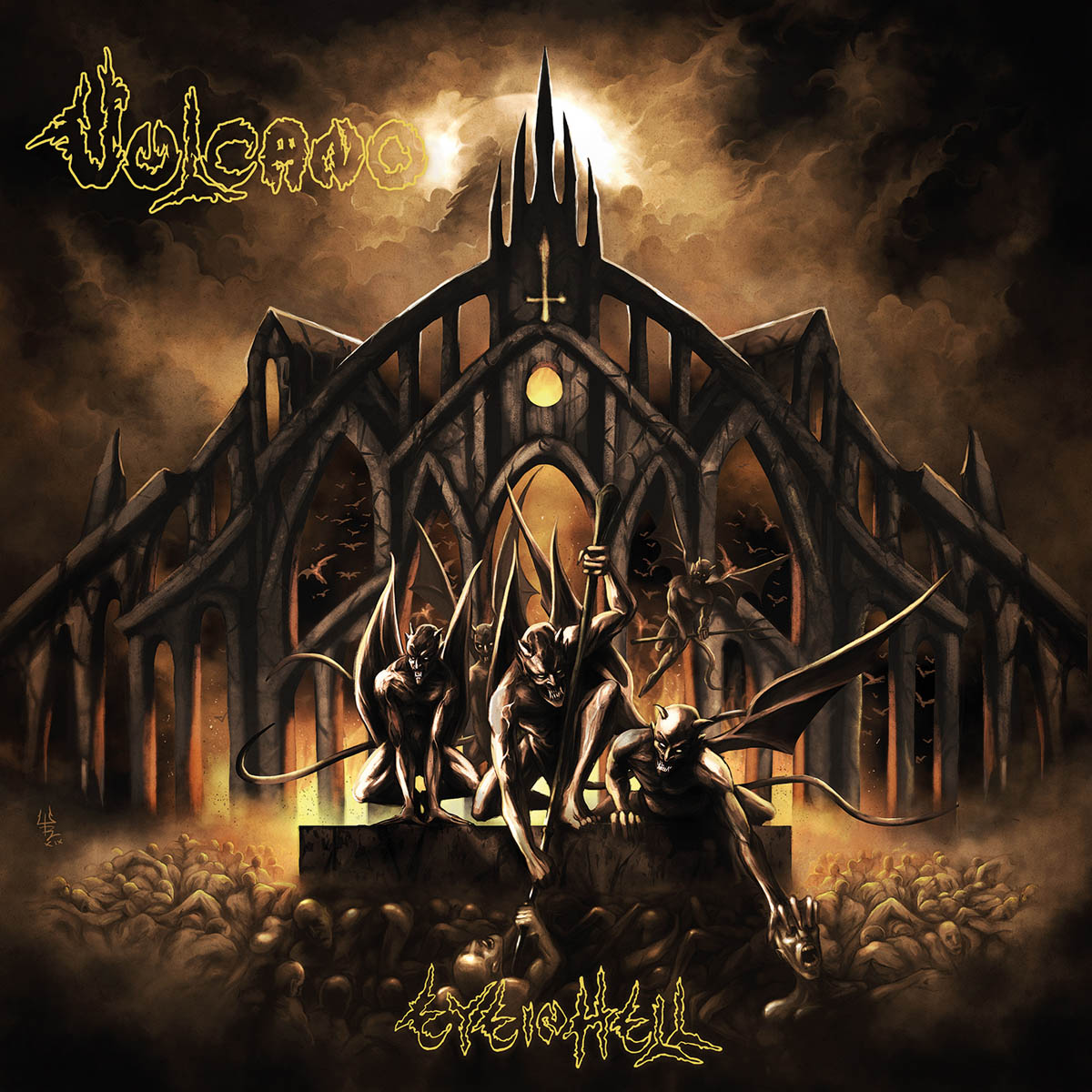 Then again, for all of the extreme metal detailing that looms at various points on this album, like many works played in the older 80s style it rests on a template that is more thrash metal than otherwise. Fairly menacing crushers like “Sinister Road” and “Mysteries Of The Black Book” have some noteworthy blackened elements, but no more than was on display back in the glory days of the Teutonic thrash scene as exemplified in such classic albums as “Persecution Mania” and “Eternal Devastation”. Truth be told, the vocal work of Louzada on these more percussive offerings leans pretty heavy towards Schmier’s signature snarl, methodically adapting his mid-ranged gruff to varying degrees of inhuman rage to fit demeanor thereof. Perhaps the most auspicious example of his adaptive character is on the slower trudging closer and title song “Eye Of Hell”, where things take on a decidedly death/grooving feel and the corresponding vocal assault takes on a decidedly Chris Barnes-like guttural character.

Although this veteran Brazilian thrash fold hasn’t yet matched the level of excellence that was on display in their mid-80s beginnings as a more extreme outfit, this is about as close as they’ve gotten in the two decades since their reformation. It has a level of initial impact and staying power that can compare closely with much of Destruction’s output since Schmier rejoined, and also showcases an old school death/thrash sensibility that fits in nicely with the ongoing revival of the vintage 80s sound as exemplified in bands like Nervosa and Jackdevil. In other words, this is an older thrash metal adherent that has bucked the trend among various Bay Area and certain European and Brazilian big names by turning back the stylistic clock a bit rather than seeking out new avenues of modernization. While seminal outfits like Exodus and Heathen have slowed a bit on their output of late, Vulcano shows no signs of doing so, and if this be any indication of how future output may sound, that will hopefully continue to be the case

In the grand tradition of Venom, Hellhammer and fellow Brazilian black/thrash trailblazers Sarcofago, one of South America’s elder extreme metal institutions gets in on the revival with a strong return to form.