We’re living in an unprecedented era in music. There is more to be found than ever before, and more to be heard, and more new sounds, than in the history of humanity. The double-edged sword that comes with that is, pretty much anyone can release anything on any platform, and it’s tougher for truly talented bands to separate their own wheat from the collective chaff. In a strange way, record labels have never been needed less, but somehow they’ve never been needed more. Voices from The Fuselage, probably most known for their lead vocalist, Ashe Austin O’Hara (formerly of TesseracT) is a great example of a modern band doing it right. They started out by releasing their music on Bandcamp, but have wisely sought out the guidance of John Mitchell‘s (Arena, Lonely Robot, KINO) quickly evolving new independent label, White Star Records, to bring their music to a wider audience than might be capable through social media alone.

Voices from The Fuselage was one of the earliest signings to the label, and their debut album, Odyssey I: The Destroyer of Worlds, originally self-released on Bandcamp, was one of the first releases on White Star, aside from Mitchell‘s own EP, Nostalgia. And it’s a good thing the two entities found one another. Many TesseracT fans swear by current and original lead vocalist Daniel Tompkins, who is admittedly very good, but I was with the band from their debut album, and was one of the likely minority who became a lifelong fan of O’Hara‘s voice from the first time he was heard on TesseracT‘s sophomore album, Altered State. It was an interesting combination of thumpy, borderline “djent” progressive metal with high and soaring, melodic and pop-tinged singing. And it worked incredibly well, at least to these ears. And as sometimes happens in the music world, that album was a one and done for O’Hara. The details are unimportant some five years later, but the end result was what mattered… TesseracT was returning to work with Daniel Tompkins. And that’s all well and good, and honestly, it was likely the best choice for the band. But there were likely many who instantly turned to their social medium of choice to figure out how to follow Ashe O’Hara‘s career from there on out, as not to lose track of him, like so much post-Kamelot Roy Khan or post-Journey Steve Perry. (There might be a reason I referenced two incredible singers there, by the way).

Well, fast forward five years or so, and we have the new sophomore album from Voices from The Fuselage, O’Hara‘s band resurrected after the TesseracT split, acting as the second in a series of their albums entitled Odyssey. And while the magic might not be exactly as it was with TesseracT, it seems a lot of the possible compromises made in that band are non-existent in Voices from The Fuselage, and all possible dissonance in years past is instead replaced with exquisite harmony. And a ton of it, too.

The single (or, song which received an official lyric video, if we’re speaking in truly modern terms) from the first Odyssey I album, called “A Principle God,” is likely one of this humble reviewer’s favorite songs of this entire decade. That’s how good it is. The rest of the debut album isn’t quite as good as that one song, but it was still a very strong first effort, produced with John Mitchell at his Outhouse Studios, and then being re-released on White Star as mentioned earlier. One exciting aspect of White Star is Mitchell‘s sense of collaboration among these young and ambitious progressive bands. Chanteusse Kim “Elkie” Seviour, formerly of Touchstone and now signed to White Star as a solo artist, is all over Mitchell‘s recent recordings, and for good reason. Likewise, Mitchell was instrumental (literally) in putting together her debut solo album, Recovery is Learning. Seviour has also appeared on labelmates The Paradox Twin‘s debut album, and there are probably even further cross-pollenations of which I’m unaware. The reason we’re delving into all of this is to note how John Mitchell (from a personal standpoint, one of this reviewer’s favorite guitarists, vocalists, producers, you name it) thinks so highly of Voices from The Fuselage, that not only was the album recorded / mixed / mastered at his studio, but he contributed one of his most blistering and “we’re not worthy” -inspiring solos of all-time to the aforementioned “A Principle God.” So, if the rest of the album had its work cut out, to catch up to that song, which ends with the gorgeous lyrics “I’ll take your hand once more / if you promise me a journey through time and space,” then that’s a high-class problem indeed. 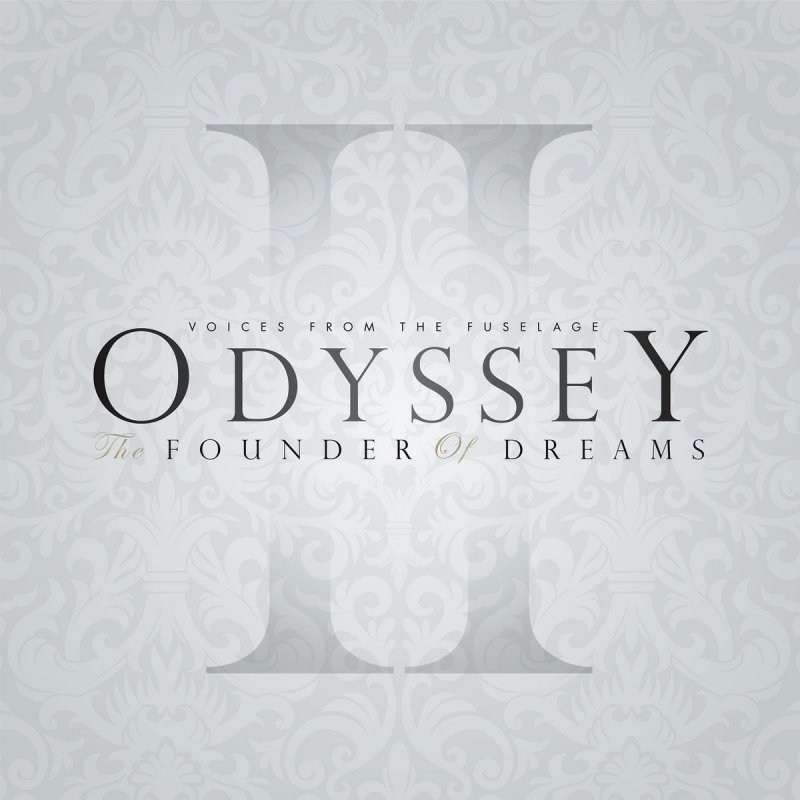 And yet now we face a bigger issue. How does a sophomore album compare to its predecessor? It’s a common problem, and often a downfall of many bands. Voices from The Fuselage has persevered, however, and come out the other end with an album that is a perfect bookend match to the first. Now that we’re safely in 2019, I can tell you that Odyssey II was in my Top 10 prog-metal albums of 2018. And yet, it’s hard to classify it as prog-metal. And it’s hard to consider it progressive rock. It falls somewhere in between. Their sound is soaked in modern, post-rock ambience, and has heavy crunching with double kick drums, but it has something that makes it so gloriously different. You guessed it, the voice of O’Hara. If you’re reading this and you’re familiar with TesseracT‘s Altered State, or VFTF‘s Odyssey I, you already know what I’m talking about. But for the uninitiated, it really begs to be heard. There is a purity and clarity, vulnerability, pain, and beauty, all at once wrapped up in this single voice more pop than prog, full of gentle vibrato and humble trills and falsettos. While the entire Voices from The Fuselage ensemble is a cohesive unit, any band should be glad to have him as their lead vocalist. But the caveat here is his voice is decidedly not for everyone, especially many who are into this whole progressive music corner of the music world. There is a timbre to his voice, a quality in his vocal delivery, that almost borders on boy-band-like at times. If it was delivered differently, or with less determination by someone less talented, the band would fail. It would be a farce. But when he goes for his upper register (on this album, usually far back in the mix, swimming in an ocean of reverb,) he almost quite literally has the voice of an angel, if you’ll pardon the cliche… and that makes for some really compelling progressive rock / metal / whatever listening.

Musically, Voices from The Fuselage doesn’t break a whole lot of new ground, admittedly, but one of the best qualities of the band is there is hardly ever complete silence. Even in the quietest moments, with just a scant bit of percussion, for example, there are always strings and pads leaking out, giving everything a dream sequence quality, or the audible equivalent of having tears well at the corner of one’s eyes but never fully wash over. Aside from O’Hara‘s vocals, one way their sound might leave the more metal of the prog-metal crowd feeling flat is the band is never all that heavy. But after O’Hara‘s time in TesseracT, where the two extremes were maybe a little too extreme from each other, Voices from The Fuselage finds maybe a better balance between the music and the vocal delivery. That’s not to say there aren’t rocking moments. In reviewing this album, at one point I had wireless headphones on my head while walking around doing mundane chores, and I was borderline headbanging while washing dishes. It just never exactly reaches the fever pitch of, say, Haken‘s recent Vector album. It’s progressive metal / djent light edition, but not in a bad way. It’s still as emotionally heavy as anything else in the genre, but it doesn’t feel the need to prove itself. Where the band is a complete ensemble experience, there aren’t a lot of fireworks, in a good way. Everyone serves the song, even O’Hara, despite his amazing voice. Even when the band’s two guitarists, Mitch Ramsay and Josh Galloway, are playing at their most furious, as in the band’s first music video, “Vestibule of Hell,” one guitar is slamming along, and the other is furiously picking high and verb-y in a true post-rock ambient style, with so much sustain there’s doubtlessly an E-bow involved somewhere, that the subtleties of the collective’s playing might go unnoticed until the third or fourth listen to the album.

Musically, there’s no sign of John Mitchell‘s playing this time around (though he was in the producer’s chair again) but instead we’re treated to the inspired playing of Olly Steele (Monuments) who shows up late in the album with a show-stealing solo on the song “Machina.” In an album free of solos, it’s a moment akin to similar U.S. Band Lux Terminus whose 2018 album The Courage to Be was completely devoid of guitar solos, as well, until a huge guest moment to help close out the album. And it’s an approach that worked just as well here for Voices from The Fuselage. It’s nice to have some variety in contribution, rather than just repeating John Mitchell‘s appearance from the first album.

Lyrically, vocally, and musically, if the listener is willing to bring it in a little closer to the middle from the extremes at the ends of the spectra, there is so much to be found here. O’Hara bears his soul repeatedly throughout the album, dealing with sexuality, family dynamics (or lacks thereof,) theism, and even as the press release puts it, “science vs. faith.” And there is more emotion and heart to be felt in his urgent repeating of the lyric “It’s all for you, it’s all for you” as heard in album single “Nine Levels” than in all the meandering 60-minute epics to be found from some of the “big names” in the genre. If the listener allows it, Odyssey II: The Founder of Dreams can take them to some either dark or beautiful places, possibly even more than with Odyssey I. One can imagine this being a favorite of a young music fan in their late teens or early twenties, going through some of the hardest times in their life up to that point, and walking from class to class with this album on their earbuds, just hoping to make the world shut up and leave them alone for five minutes while they go to whatever place they feel the need to go. And it’s tragic and perfectly fitting of some of the lyrical themes found within this music. It’s the bearing of the soul in life, the vulnerability and despondency that can break us in our weaker moments, or empower us in our stronger ones. A personal epic unfolding in real life, in real time. And as the band tells us, it’s all for you. It’s all for you.

After such an incredible album with TesseracT, the pressure was on Ashe Austin O'Hara to really deliver in his next project, or possibly wind up in obscurity. And now that we're two albums in with Voices from The Fuselage, it's exciting to see this band continuing to mature and grow, giving us a great companion album to its predecessor. The band doesn't break a whole lot of new ground, but they bring an interesting approach to the table, keeping things lighter where they could push for heavier, and O'Hara's – again – fantastic, pop-tinged voice is the main attraction here. And as long as their relationship with John Mitchell continues, the albums will continue sounding incredible. It will be interesting to see what happens with the third album (Odyssey III?) to see if the band really pushes itself and becomes something greater.