The stories of one of Italy’s most renowned progressive power metal bands in Labyrinth and that of Vision Divine are inexorably linked, to the point where it is difficult to declare which one was the original. By extension, much of the consequential outfits that made up the initial 1990s power metal revival in the Italian peninsula have a single degree of separation between them, as various members of the aforementioned bands have been in a virtual game of musical chairs with that of Rhapsody Of Fire and Secret Sphere. But however one wishes to describe the relation that this turn of the millennium scene shared in a broader sense, Vision Divine itself could best be understood as the one standing in the midst of the rest, embodying both technical flair, bombast, and speed that encompassed every important band in southern Europe that was taking inspiration from Helloween and merging it with a progressive or symphonic niche, and was arguably at its best when Fabio Lione’s operatic tenor was leading the charge, culminating in an astounding eponymous debut and the near equally triumphant 2002 follow up “Send Me An Angel”.

Though one would be remiss to discount the strength of the era that immediately followed with Michele Luppi taking over vocals, it was fairly clear that things were drifting into more of a progressive direction. The re-entry of Lione into the fold towards the end of the 2000s was consequently viewed as a welcome return to the good old days, though sadly his eventual recruitment by Angra would inevitably lead to his second exodus from the fold: all of a sudden Vision Divine was in a similar position as Rhapsody of Fire in that it was without the services of vocalist Lione. Along with some further lineup shifts and several years of studio silence, not to mention guitarist and mastermind Olaf Thorsten returning to Labyrinth, the future seemed uncertain for this once mighty, pioneering act of the Italian scene. However, Olaf has had a track record of scouting talent and building up a crumbling situation into something all but equal to what it was in the beginning

The band’s last release “Destination Set to Nowhere” – now seven years old – was highly regarded as another in a line of power/progressive masterpieces from a band that has been consistently brilliant in songwriting, even though not consistently releasing albums. The band is no stranger to vocalist changes, but when personally speaking to songwriter/founder Olaf Thorsen in September 2018, he indicated that he finally found a singer who could sing the new material and back catalog equally. Still he was mum on the name. When the band issued the video for the brilliant power metal laden single “Angel of Revenge,” which presented Derdian‘s Ivan Giannini, there was no doubt that Thorsen had recruited one of the most talented vocalists in Italy. Thus, the chances for another in a long line of phenomenal albums from Vision Divine was secure. 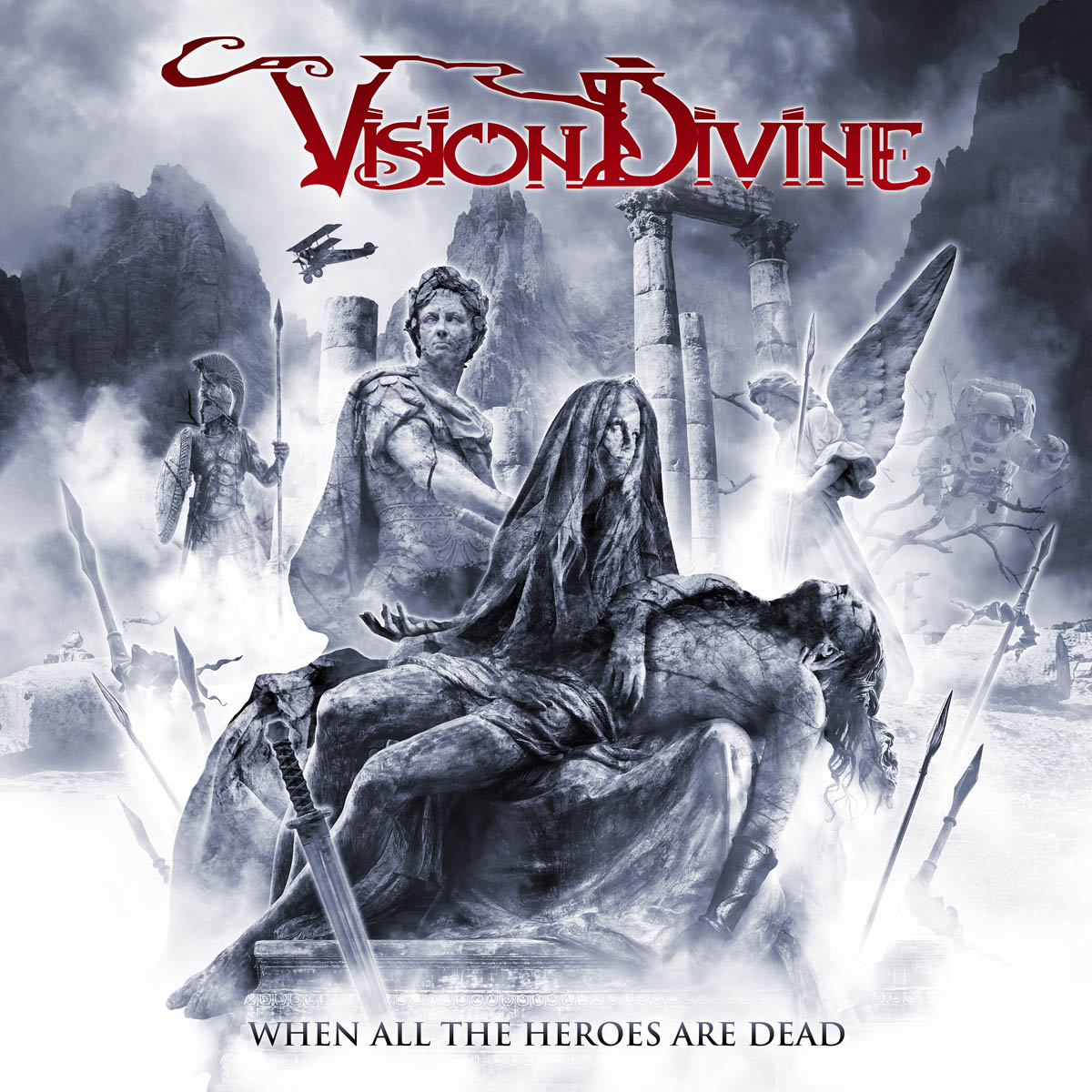 “When All the Heroes Are Dead” Album Artwork

There are some musicians that your author rarely worries about when it comes to writing modern, intelligent and glorious music, and Olaf Thorsen and keyboardist Alessio Lucatti rank prominently among them. Always reliable, Thorsen has such an incredible talent for creating music that is cutting edge, catchy and wonderfully written, but which never forgets to be metal. Too many acts these days blur the lines of music, effectively casting off the metal part as some sort of subservient form of music that is childish, or cro-magnon. Vision Divine‘s appeal to so many fans of a variety of subgenres is what sets it apart from your typical power/progressive metal band – the power is still drawn from its metallic routes. Call it “grown up power metal,” if you will.

So the question becomes, is “When All the Heroes Are Dead“, a continuation of the trend back towards the project’s late 1990s roots that began when Lione made his return? In actuality, no, it’s a full on return to the same frenetic, technically extravagant and power metal dominated template that typified the debut. In terms of the sheer impact factor, infectiously memorable hooks and elaborate interplay of the instruments, this is about as blatant of a throwback to the good old days at it could get. Along for the ride is a somewhat cinematic feel to things that is a bit more in line with the common practice of power metal bands of late, featuring a riveting film score inspired prelude in “Insurgent” that mirrors the practice of the early 2000s in setting a tone with a short instrumental, but with a more colossal Hollywood-like presentation.

The biggest difference between “Destination Set to Nowhere” and “When All the Heroes Are Dead” is that the material is much more uptempo and hard charging. There is new life in this band and it shows in the perfectly mixed and produced sound (with Simone Mularoni joining both Thorsen and Lucatti on the production team), which is both heavy and airy. The first three songs – “The 26th Machine,” “3 Men Walk on the Moon” and “Fall From Grace” – burst forth with thrilling riffs, impassioned solos and Giannini‘s incredible range. Riff-happy cruisers like “Now That All The Heroes Are Dead” and “The King Of The Sky” are made to order for anyone who loves their speed metal riffing delivered with that classic, Stratovarius – inspired melodic grace and plenty of Petrucci vs. Rudess -inspired guitar and keyboard solo madness to polish things off. That momentum only lets up for a few songs throughout the rest of the release.

The band took some crap from some “well educated fans” when they released “3 Men Walk on the Moon” as a single, daring to insinuate from the title that astronaut Michael Collins walked on the moon, losing the spirit of a song that was not only a celebration the achievements of the Apollo 11 mission but one of the best tunes on the album. If it only the song was entitled “2 Men Walk on the Moon and 1 Had No Place in History Because He Stayed in the Columbia Module Watching the Eagle Land Below Him” then all would be good. Coming in at an only slightly less quick pace stand an assortment of sing-along romps with plenty of rhythmic and thematic nuance like “On The Ides Of March” and the riveting crusher “300”, each one an elaborate tale unto themselves capturing the atmosphere of the moon landing, the assassination of Julius Caesar and the glorious Battle of Thermopylae with a balance of familiar cadences and high-grade technical precision.

The album’s stunning power ballads come in the form of “While the Sun is Turning Black” (which is still chock full of brilliant Brian May guitar moments out of Thorsten) and album closer “The Nihil Propaganda” – where Giannini really gets to show off the entire repertoire of his vocals, from the effortless screams to a stirring low end, while the music expands and pours out around him. Some of the album’s best overall musicianship appears on the title track, where Thorsen and Federico Puleri‘s blistering riffs and dazzling solos duel Lucatti‘s key work all overlaying Mike Terrana‘s beast like fills. While “Angel of Revenge” (relegated to a bonus track on the final release) is the most power metal driven track on the album, it is matched blow for blow by in intensity by “300.”

Is “When All the Heroes Are Dead” worth the seven year wait on top of Fabio‘s departure? It may be a cliché to allude to the trope of the comeback kid or a magician pulling a rabbit out of his hat, but those are the sort of analogies that best describe the astounding feat that is this album. When you factor in the reliable musicianship and songwriting with the perfect choice of Ivan Giannini, there is no doubt that this band has never been better. Given the massive legacy that had already been established both during Fabio Lione’s riveting double tenure with this outfit, and the near equally intricate if fairly different middle period that was the Luppi years, the odds were set against Olaf and company keeping this train running at full steam, let alone nearly top every album they’d ever put together.

“When All the Heroes Are Dead” is the sort of record that so seamlessly blends two fairly different sub-genres of metal that it would be difficult to imagine any progressive or power metal fan not taking to it. The songs never lose sight of the metallic roots while drawing modern and intelligent influences, thus creating an exciting collection of songs that rarely lose momentum. Say what one will about the fatalistic title and the depressing visual presented on this album’s exterior, this is about as uplifting and triumphant of a musical experience as there has been since the second wave of power metal first began to wash over Europe. An album that forewarns of a time that may come, Thorsen, Lucatti, Torricini, Puleri, Terrana and Giannini are proof that some heroes are alive and well.

“When All the Heroes Are Dead” Track-listing:

After a seven year slumber, Vision Divine have returned with new energy and in an absolute vengeance, shattering the speed of sound and rekindling the link between Helloween’s melodic splendor and Dream Theater’s nuanced virtuosity. With a fresh outlook, modern approach, but rooted squarely in the band's power metal roots, "When All the Heroes Are Dead" is a masterpiece of power/progressive metal and shows the band looking towards the future without betraying the past. The course correction has the band heading to a "Destination Set to Somewhere"!