Something strange happened on the way to Algalord. Sure, parody and gimmickry have been around for ages in metal (especially thrash metal), but not as prevalent as it is in the present. Gloryhammer set a new standard for over the top power metal in 2013 with the release of “Tales From the Kingdom of Fife.” While poking fun, or rather having fun, with the European style power metal sub-genre, Christopher Bowes also created one of the best power metal albums of that time. It marked the signal that power metal had to become a parody of itself in an effort to survive stagnation. Add the ultra speed and wankery of Dragonforce and a dose of popularity (populated by fans who now could save face by enjoying the music while still not having to take the sub-genre seriously), and a new breed of power metal bands was born.

Enter Germany’s Victorius – a band that has put out top notch power metal since 2010’s “Unleash the Titans.” After four excellent releases, the band took a little detour, releasing the ultra sonic EP “Dinosaur Warfare – Legend of the Power Saurus” in 2018. It was a genius move, because how can you NOT be interested when seeing the cover art filled with prehistoric animals with laser beams shooting out of their mouths. Even fans who could easily pass on power metal just had to find out what the hell this sounded like. So, with songs like “Lazer Tooth Tiger” and “Razorblade Raptor,” Victorius was transformed, and with over the top ridiculous lyrical content and jacked up hyper speed – it was as if the excitement level was shot out of a cannon… a laser cannon!

Less than a year later, the band announced “Space Ninjas From Hell,” fully embracing this new path. What better way to show off that new path then the land of the rising sun, where kitschy anime, oversized cat vehicles and anthropomorphic creatures reign supreme. The video for the first single “Super Sonic Samurai” doubled as both the most exciting track the band ever issued, as well as the best Dragonforce song ever. Vocalist David Bassin had cut his hair, looking like a double of Thomas Winkler’s Angus McFife. His vocal style (imagine a 17 year old Georg Neuhauser at 78RPM), remains one of the best in power-metal town. 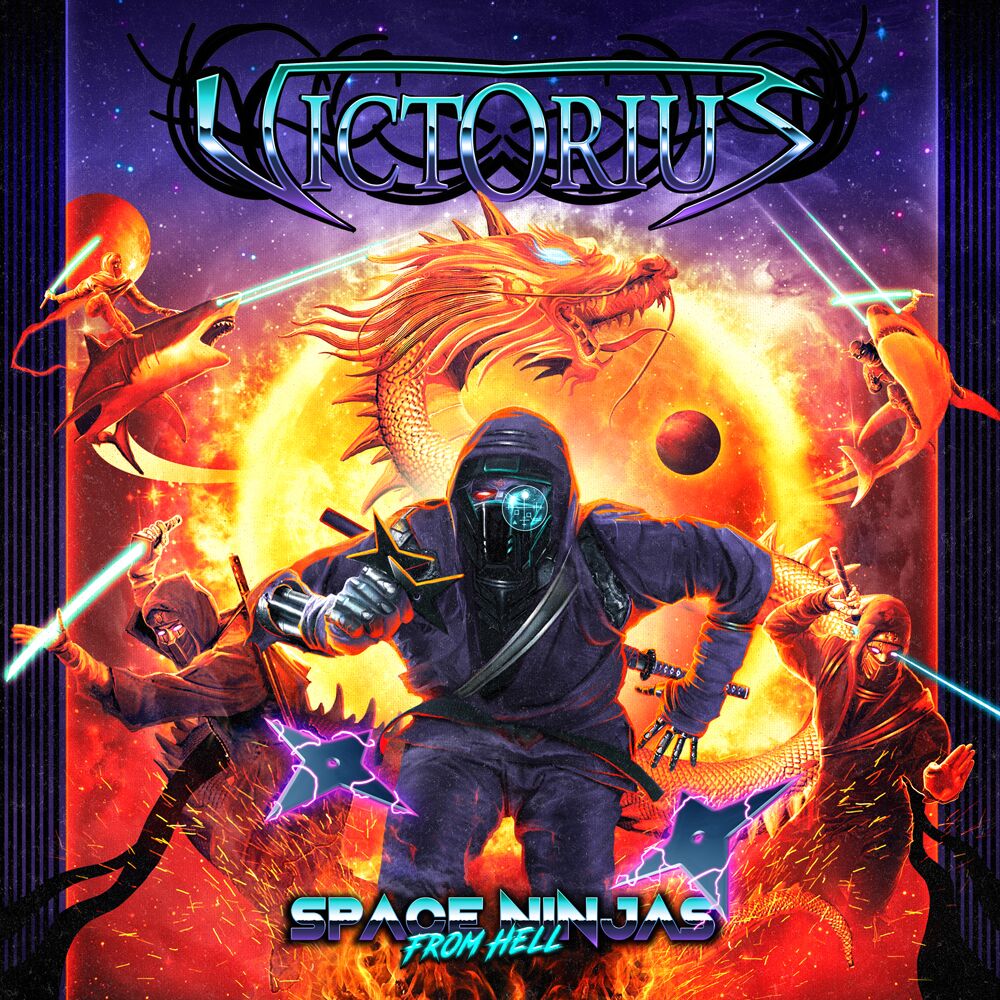 Even though every fiber of my circa 1987 gimmick hating self was crying out in horror, the older 2020 self succumbs immediately to anything this catchy and absolutely ridiculous over the top metal. Why? Because while the imagery and lyrics are pointless, the music is precisely the type that I crave – the dazzling, flamboyant twin axe speed (courtesy of Flo Zack and Dirk Scharsich), thundering rhythm section (from drummer Frank Koppe and bassist Andreas Dockhorn) and blaring tinny keyboards like cherubs blowing horns and the sing along choruses. This is the ultimate the antidepressant, and while Gloryhammer may have blazed a path for renewed power metal popularity, Victorius features far superior musicians, having honed the band for well over a decade before this transformation.

Victorius is proof positive that the music still prevails, regardless of the imagery. Not many fans can look beyond it, but your author has a knack for ignoring everything and allowing music to speak for itself. It may be super early to talk about songs or albums of the year, but one of “Space Ninjas From Hell“‘s most deliciously absurd tracks that I can already foresee topping a chart is “Wasabi Warmachine.” The last time I wanted to drive 150mph and crash everything in sight was playing Grand Theft Auto. Even the cringe worthy intro is fully embraced in my cerebellum, because after the 100th spin, I know it heralds a riff that I simply cannot repel. The chorus is perfect, and decidedly heavy, and I’ll proudly scream “Hail! To the War Machine, hot and spicy, and so green” even though even though my subconscious rejects it (I abhor wasabi).

Other highlights on the album include the equality stup-endous Rhapsody-esque “Wrath of the Dragongod,” the magnificent happy metal anthems “Shuriken Showdown,” “Astral Assassin Shark Attack” and “Evil Wizard WuShu Master” and the absurdly infectious opener “Tale of the Sunbladers.” The speed, the bountiful speed! Produced by Freedom Call songwriter/guitarist Lars Rettkowitz (who produced the previous four Victorius releases), “Space Ninjas From Hell” sounds pristine and huge (as most Freedom Call albums do).

With zero apologies, Victorius sounds fresher, more exciting and brand new since morphing into the next Gloryhammer. With far better musicians, the band easily vanquishes the realm of the Kingdom of Fife (I mean, dinosaurs with lasers, astral assassin sharks and ninjas, its no contest!). Over the top power metal played at 150mph with some of the most ridiculous silly lyrics will be a complete turn off to a huge swath of fans, but at the moment embracing this path has resulted in the most memorable release in the band’s catalog. As for those cro-magnon fans (yours truly) who view perfect music as just a catchy hook and a sing-songy chorus and ignore the silliness as just fun, Victorius just fired off one of the most insanely enjoyable albums that will stick in the mind for the foreseeable future.

The full jump into gimmickry has been in the works for some time in power metal, most recently made famous by Gloryhammer's rise. Say what you want about it, but the more silly Victorius has been in the imagery and lyrical content, the more over the top and sensational the material has become. With "Space Ninjas From Hell," if you can overlook the ridiculous, you will find that the album is by far the band's best and most exciting with ultra-fetching heavy riffs and sing-a-long choruses that stick in your head for days. However, keep in mind that you'll be singing "Hail to the War Machine, hot and spicy and so green." Go ahead...try NOT to do it.