In rock music, rare are the occasions when a band offers thoughtful lyrics or a message to go along with their music. In the case of United Progressive Fraternity (UPF), they have created music to go along with their message. Rather than just being a band in the traditional sense, UPF is a movement that collects together musicians, artists and ‘climate gurus’ who are aligned with their mission. Mission? How often does a band have a mission, other than to excel in their specific area of musicianship and sell a lot of records? Impressively, UPF is focused on loftier goals, namely: “To promote environmental and social awareness, directly relating to the state of Planet Earth and the human condition.” And musically speaking, their Mission Statement is: “To produce great music, as a collective concept, whilst conveying a message of peace, hope and global awareness”. Judging from this first Part in their Planetary Overload series, they are living up to their Mission Statement in splendid fashion.

The mastermind of this collective fraternity is vocalist, co-producer and songwriter Mark Truey Trueack, who found his artistic partner for this project in Steve Unruh. In addition to producing the album (along with engineer & mixer Cornel Wilczek), Unruh plays a host of instruments from violin to flute to guitar to vocals. Evidently Trueack has chosen well because the recording sounds sublime. While UPF does have a core band of sorts, it boasts such a vast list of “guest artists”, “guest voices” and “music arrangers” that it becomes impossible to say exactly who UPF is…it truly is a collective, and we have all been assimilated (you can catch the full roster at this location). To make it even more confusing, there’s a bonus disc by “Romantechs” who are the trio of Trueack, Unruh and Christophe Lebled, offering innovative remixes of several UPF songs. You’ll need a roadmap for sure to follow the flowchart of musicians. Suffice to say, even though it’s hard to track who has written/played on which songs, the resulting music is a warm blend of progressive rock and world music that is beautifully produced and comes from the best intentions of its contributors. It also looks gorgeous thanks to Ed Unitsky‘s evocative cover artwork. For that, kudos to the fraternity! Now let’s get into it…

“Loss Anthem” kicks off the album in an understated way. Not truly an anthem in the sense of an infectiously sung chorus, it opens more in the vein of Jon Anderson’s Olias of Sunhillow atmospherics, likely thanks to Christophe Lebled’s keys, as he has previously worked directly with Anderson. Flutes, violins, celestial keyboard patches, soprano sax, chimes, and cymbal swells all swirl over “guest voice” cameos speaking to the dire situation of our planet’s ecological well-being. Not surprisingly, Yes’ current lead singer Jon Davison offers some of the album’s first sung vocals as well (never sounding more Anderson-esque himself). The title of the album may be “Loss”, but even in these first lyrics there is hope: “Loss brings us together, Loss takes us closer than before.” This re-contextualization of the word “loss” suggests that the journey before us is not going to be a complete downer, even though we are inevitably dealing with the environmental degradation of the earth. “What Happens Now?” is indeed the question before us, and the title of the first proper song on the album. Trueack’s vocals kick in with Unruh’s flute dancing around him like Ian Anderson dancing around on stage, later supplemented by Marek Arnold’s and Clive Hodson’s sax and wind instruments, and Angus Keay on guitar. At times rocking, and at times seductive with Mark Franco’s slinky bass lines and special guest Jerry Marotta’s percussion, this song is engaging and yet still feels like an intro to the album’s main content. 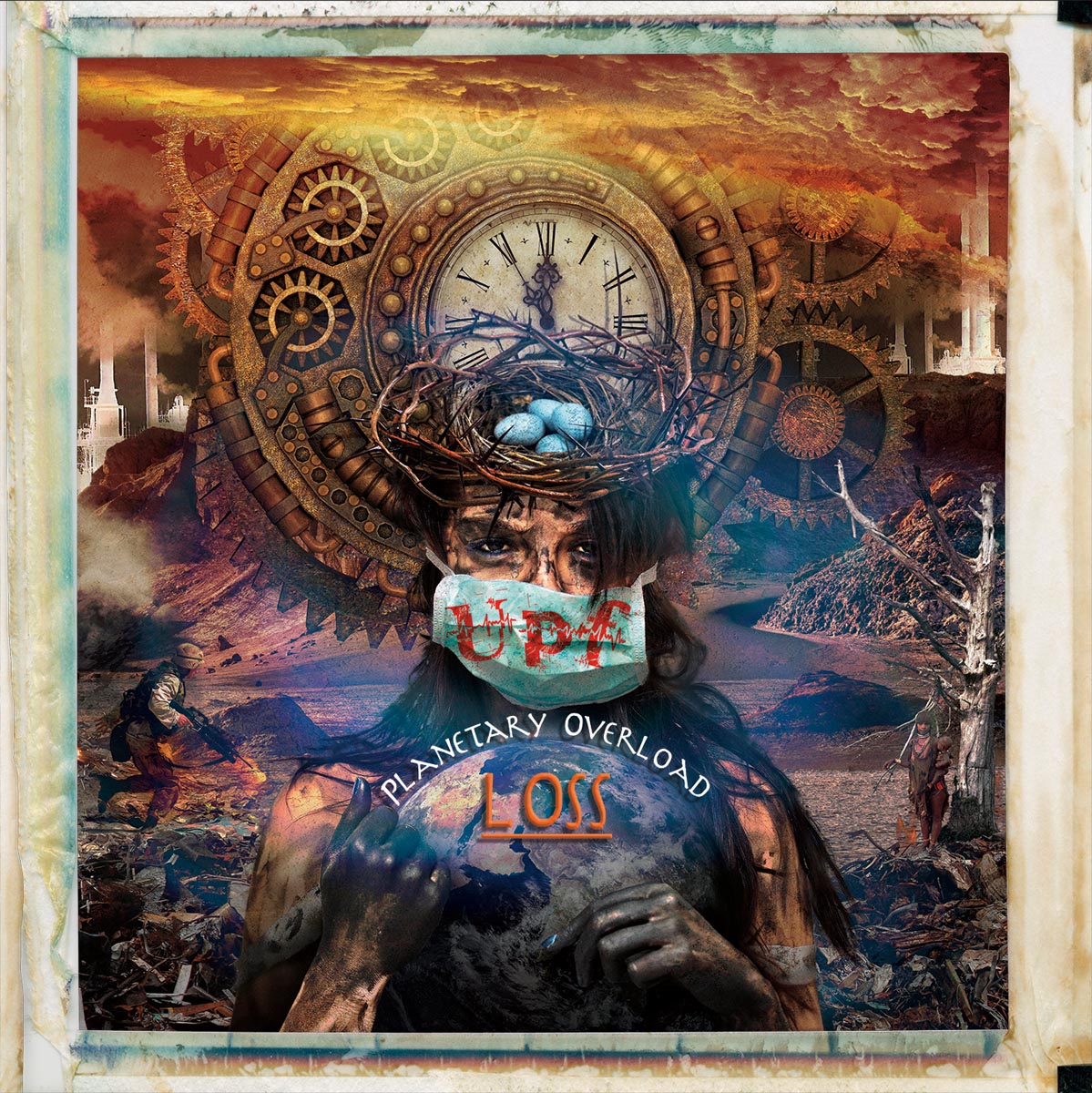 The 8-minute “Cruel Times” gets us embarked on our journey in earnest, starting as a tender ballad singing, “These are cruel times, nothing can make that untrue,” but also reminding, “There is hope in everything we do, let’s stand together and face the gloom.” Arranged and co-written by guitarist Ettore Salati, along with Angelo Racz who also plays keys, this song develops into a symphonic prog delight propelled by Joe Toscano’s drum kit and featuring Lisa Wetton’s backing vocals. By the song’s finale the listener is pulled in and fully on board with wherever UPF wants to take us next. “What Are We Doing to Ourselves” then brings a bit of world music influence to the fore with tabla and kalimba for a short acoustic interlude before the high octane “Stop Time” kicks in. A highlight of the album, this rocker has just about everything in it that a prog fan would want. Featuring notable guests like Nick Magnus on keyboards and melody-writing, Hasse Fröberg on supporting vocals and Colin Edwin on fretless bass, this is a power-packed piece that shows off the potential of UPF’s extended fraternity at its best. However, it’s Hans Jörg Schmitz on drums who really gets the showcase halfway through, raising the bar several notches to make this perhaps one of the best songs of the year.

After the onslaught of “Stop Time” we need a break and that comes in the form on “One More”, a beautiful acoustic piece that is short on development but heavy on melody, tastefully supplemented by strings in the manner employed by Trueack’s previous band, Unitopia. A closing narration is offered decrying the dangers of putting the economy over the atmosphere that keeps us alive before we launch into, appropriately, “Mercenaries”. This piece also dips back into Unitopia’s days with musicians from that band, namely Matt Williams triumphantly returning on guitars, bass, vocals & songwriting, along with David Hopgood offering an excellent drum performance. It’s the second hard-hitting song on the album, with some fiery violin playing offered throughout and a middle-eastern scale that is intoxicating.

Another brief acoustic-guitar interlude comes in the tender “What If” with Brendon Darby’s ethereal horn playing over Trueack’s ponderings before six year old Brodie Byrne asks “Father, what are we doing to ourselves?” The response is the most evocative track on the album, “Forgive Me, My Son”. Featuring the masterful Charlie Cawood on saz, oud, bouzouki, hammered dulcimer and a host of unpronounceable instruments from around the world, this spacious piece takes its time in playing with dynamics and the payoff is huge. Kudos to Trueack for having the wisdom to let Cawood reveal his magic, at times supported by the band including Alex Grata on vocals, synths & looping, and Phill Sokha on drums. We then move into yet another highlight on the album, “Dying to Be Reborn”. Featuring a gorgeous melody, the star of this piece is Trueack himself. As his voice goes up the octave in the chorus, we are reminded that he is one of the finest vocalists in progressive rock today. Support vocals from Lisa Wetton, guitar from George Perdikis, and more keyboard wizardry from Nick Magnus add to opening up the magnificence of this song. “Maybe we can finally open our eyes.”

If it feels like “Part 1: Loss” has already delivered the goods, the fraternity has another surprise up its sleeve: a 19+ minute epic called “Seeds for Life”. The premise is laid out at the start with Dr. Cary Fowler’s explanation of the Svalbard Global Seed Vault, which “provides ultimate security for more than 850,000 unique crop varieties, the raw material for all future plant breeding and crop improvement efforts.” While the spoken 2 minute introduction may become tiresome with repeated listenings, it is a worthy lesson for all fans of UPF’s mission to take in. The piece of music that follows covers nearly all of the terrain of the album thus far, albeit in one seamless run. It also features the largest ensemble yet. In addition to many of the album’s previously mentioned musicians, “Seeds” also finds Gordo Bennett contributing to the writing of the music and arrangement along with keyboard playing, Marc Papeghin offers French horn, Jesús Gancedo García adds to songwriting and drums, Matthew Atherton sings and plays synth, and Cornel Wilczek conducts the “Fraternity Symphonic Orchestra”. Let us not forget the spectacular 6-string guests, too: Michel St-Père from the band Mystery on electric guitar, and none other than Steve Hackett on a virtuosic classical guitar cameo. Whew. Does it all hold together? Absolutely. As epic as its subject matter, “Seeds for Life” is representative of what the United Progressive Fraternity is all about and could easily have closed the album with Hackett’s final beautiful nylon-string chord being played. But there is one additional piece left, “Loss to Lost”, another strong song featuring Raf Azaria and Guillermo Cides, and on soaring soprano vocals: Grace Bawden. Although the album spans 74 minutes, the strength and diversity of the material means that UPF don’t overstay their welcome. Indeed, it’s good news that a Part 2 is in the works, along with potential large-scale live performances.

It almost seems beyond coincidence that Jon Anderson just released a Volume 1 of his album 1,000 Hands, considering that UPF’s Part 1 also employs as many or even more special guest “Hands” than Anderson’s, and cover some obviously similar terrain. The sum total of this happy coincidence is that there are thousands of hands busy creating peace through music. While we could say that UPF do not have a strong band identity due to their spirit of diverse inclusion, they turn that into a strength by transcending what a “band” really is. Their fraternity and mission point the prog music world towards new directions, new aspirations, new heights. And as we discover, this is the kind of progression that is really needed in the world today, if the world is to survive.

Phase I: Dawning On Us

More than a band, United Progressive Fraternity is an impressive collective of musicians gathered around a mission of peace and ecological awareness. Impressively, the music they create in support of that mission is accessible, engaging and provoking, as Part 1 of Planetary Overload demonstrates. Fans of Unitopia, Yes and Genesis will feel very at home here musically speaking. But with environmental activism at its core, UPF go in directions that few bands have gone before and in that sense, they are progressive beyond their musical roots.