Born in 2012, The Scourge – featuring Helstar members Andrew Atwood (vocals/guitars) and Garrick Smith (bass) – released the debut EP “First Comes Destruction” in 2014. Now five years later, the band plans to horrify your Halloween like Michael Myers did to Haddenfield. If you are one of those fans looking for a technical progressive masterpiece, then The Scourge isn’t for you. “Warrant for Execution” is pure unadulterated metal played in the classic style of old school thrash, which is refreshing in many ways.

The band was created as an ode to the bands that Atwood, Smith, drummer Alex Erhardt and your author grew up listening to. Back in that time, there weren’t the 720 subgenres of heavy metal that exist today. It was all just called metal. This was a time when bands like Overkill, Testament, Metal Church, (early) Metallica, Megadeth were just hitting their stride, but also bands like Omen, Laaz Rockit, Heathen, Nasty Savage, Exciter and Exodus were leaving a mark. The Scourge is not merely another band in the recent revival of New Wave of Traditional Metal bands, as these guys lived it.

The purity of the metal presented here is not the type with the slick euro production, but the kind we heard in the 80’s…the dirty, filthy kind that came from back alleys and sewers. No, no – not NME dirty, filthy! This metal is raw, powerful and guts you like an old slasher film (the kind with NO CGI!). The mix is expertly dipped in blood by Horrendous guitarist/vocalist Damian Herring, so it has a purposely dated sound. The lyrical themes are overtly shrouded in horror, illustrated by Ungrieved guitarist Diego Garza‘s cover artwork, yet another throwback. The album has the same feel as F.K.U.‘s “1981” from 2017. 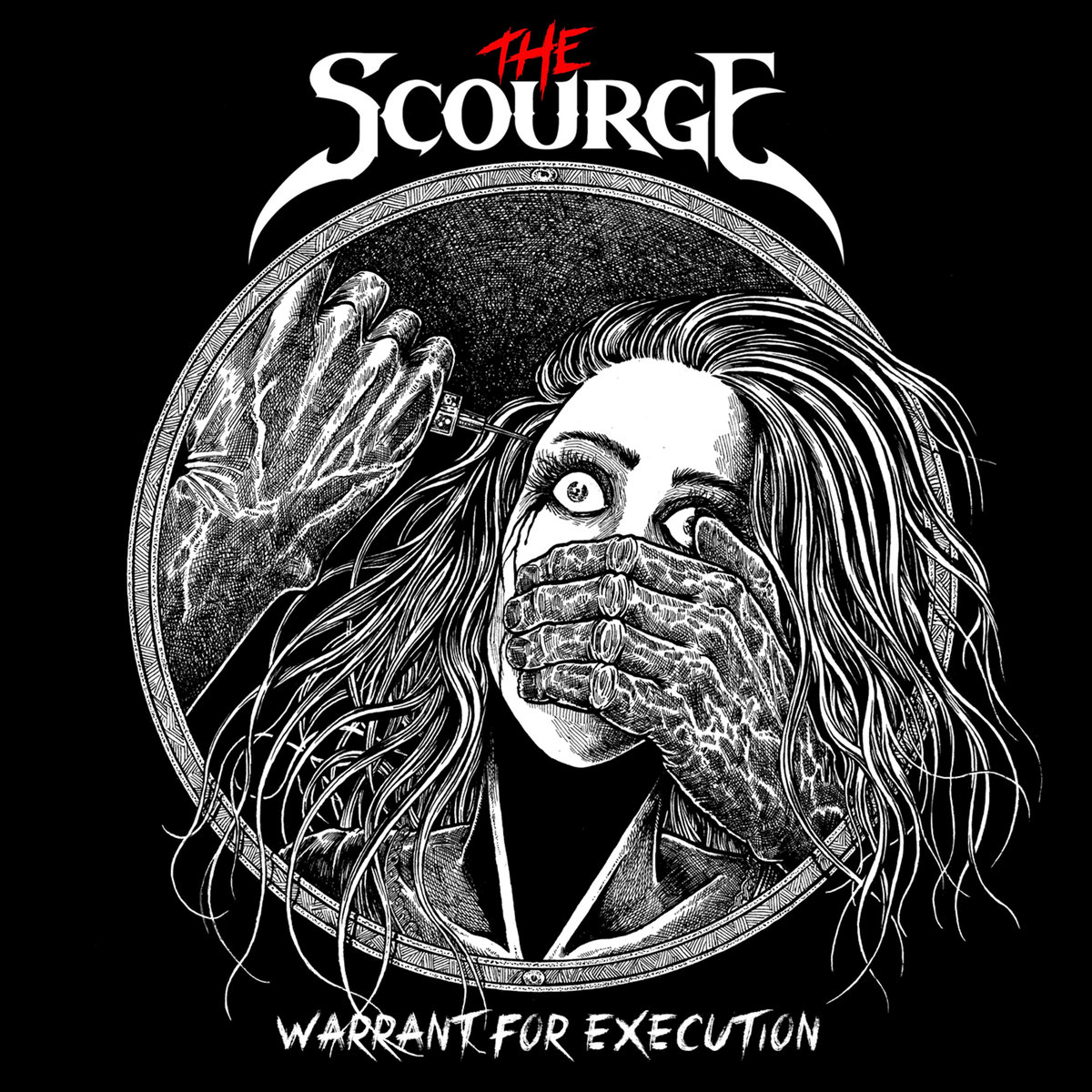 Erhardt‘s drums are natural and in your face, the saw toothed and punk laced thrash riffs Atwood come straight off some classic Motörhead albums and his scored vocals sound like the bastard child of Slayer‘s Tom Araya and Matt Barlow (ex-Iced Earth). “Warrant for Execution” has material that ranges from pure speed (“Progressive Forms,” “Death Draws Near Dark”) to uptempo punk thrashers (“One By One,” “S.O.I.”) all out Slayer influenced chaos (“Mayhem,” “Warrant for Execution”) and straight up Metal Church power (“Killed,” “Hellbound And Down”). There is even a 10+ minute metal masterpiece (reminiscent of those closing epic longer tracks from the classic Overkill albums).

If you are looking for a real throwback metal album and not just a bunch of kids who are trying to recreate a past they never lived, The Scourge is here for you. Playing to the old school metal guy in me, the band presents it raw and loud, fast and proud – drawing elements from so many classic metal bands in a time when metal was just metal. Expect no progression…only regression and that is no insult! This is no bullshit, no frills metal that’s gloriously catchy, compelling heads to bang on impact.

Like a slasher film with no CGI, The Scourge bludgeon you with old school thrash from a time when there was only ONE subgenre of metal - metal! You won't find any progressive masterpieces, but punk infused speed overlaying beefy riffs and scored vocals that run the gamut of old school bands like Overkill, Nasty Savage, Metal Church and Slayer. Rather than a bunch of kids recreating the past, this is a refreshing throwback from some musicians who grew up in that past.