Not every bassist has ambitions to forge their own songwriting vehicle, much less form a band and release a trio of engaging and challenging albums. But for those who know him, Nick Beggs is no ordinary bassist. For starters, bass is only one vehicle for his creativity to flourish as Chapman Stick, guitar, keyboards and programming are all credited to him on The Mute Gods’ latest recording, not to mention lead and backing vocals. Increasingly known in progressive rock circles for his work with Steven Wilson and Steve Hackett, along with other endeavors such as Lifesigns and Fish on Friday, Beggs also has strong ties to the pop rock world through his work with Howard Jones and, of course, a long history with Kajagoogoo since the early ’80’s.

When it came time to create a band of his own, Beggs didn’t have far to look. He wisely enlisted Roger King to handle keyboards and his expert production skills, having toured with him extensively in Steve Hackett’s band. For the drummer’s stool there also was an obvious choice: Marco Minnemann with whom Beggs played in the Steven Wilson band. As all three musicians also play guitar – and so far have not played live, thus haven’t needed a touring guitarist – the band was complete as a trio and dubbed “The Mute Gods”. The band name portrays Beggs’ take on the silent ineffectualness that religion has on the serious injustices of the world. Indeed, most of the band’s lyrical content revolves around themes of disillusion, critique and rage at the world’s political, religious and societal answers (or lack thereof) to the daunting issues that face mankind. As the title of their second album suggests, tardigrades may well inherit the earth after we have done away with ourselves in a God-less world.

If it all sounds rather bleak and uncomfortable, it is. Beggs hasn’t been too shy about laying his personal perspectives on the table for all to see and deal with. Quite often the accompanying music has been appropriately dark and angular to meet the confrontation of the lyrics. However, third album Atheists & Believers somewhat lightens the tone for its audience by offering more melodic and welcoming themes, with plenty of hooks and choruses that are sometimes even downright catchy. Whether Beggs went on a listening binge of Tears for Fears and XTC prior to writing the new album or some other divine intervention occurred, Atheists & Believers may make a believer out of many of its listeners and certainly is the most universally accessible release in The Mute Gods’ catalog.

Leading off with the title track “Atheists & Believers”, The Mute Gods offer an extremely catchy chorus that could be one of their best singles yet. Beggs’ punchy bass and strong vocals, Minnemann’s rock solid drumming and King’s production and keyboard solo offer enough sweetness that one can almost miss the cynical lyrics that lie underneath, a critique of the media’s spin of “certain types of news stories”, namely UFO’s and aliens. “One Day” then takes the musical strengths of the previous song and raises it up a notch with a series of delicious, swirling melodies where Beggs, always blessed with a pleasing voice, has now become completely convincing as a front man and lead singer. The song takes on new textures which are due to its very special guest: Alex Lifeson on assorted guitars. A jangly 12-string guitar plays underneath layers of vocals and organ to create a dreamy landscape that delivers a hit song in waiting. The audience can’t help but sing along with the catchy refrain, “Life is a chemical reaction”, perhaps not realizing that the author means what he says: we’re only here because of random physics, kids, not because of the will of some celestial God. The album doesn’t pause for a second to catch its breath as it goes right into third sumptuous pop song “Knucklehead”. If the listener was able to miss the lyrics of the previous two songs, this number will clearly hit them over the head with its unimpressed stance on the human race. And lest you think it’s pointing fingers at others, full responsibility is taken by declaring, “For each and every one of us ends up Knuckle-headed in the end.” This would make a dandy mashup with XTC’s “Poor Skeleton Steps Out”. The arrangement is equally intoxicating as the previous two songs as we enjoy the slaps and pops of Beggs’ bass amidst sequenced keyboards and backing vocals that transport us back to the ’80’s in the best sense of the word. 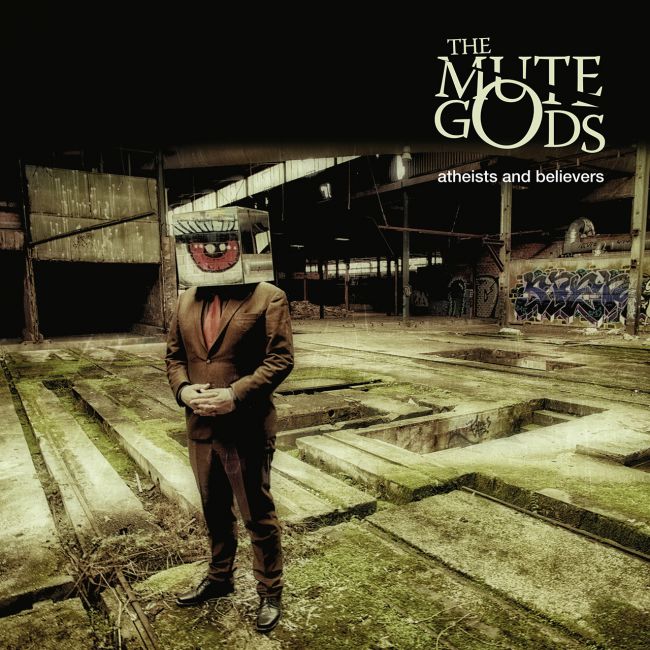 Three songs in and we find Atheists & Believers to be incredibly consistent in its aim for the Top 10 of the pop charts, despite its subversive lyrics. The rest of the album will start to provide a bit more diversity, starting with “Envy the Dead” which takes a darker tone as Marco Minnemann gets more room to stretch out on drums and guitars come to the fore to highlight the heavier edge. Afterwards, an instrumental track is suddenly dropped in, “Sonic Boom”, and it’s a damn good one. Just for kicks, Craig Blundell is brought in on drums for this piece, another bandmate of Beggs in the Steven Wilson band. Beggs fashioned the song around Blundell’s playing style and perhaps not coincidentally this hard-hitting theme wouldn’t sound out of place on a Wilson or Porcupine Tree album. We could use several more instrumentals in this mode, a most worthy diversion.

And now for a brief acoustic respite. The heavy pastoral nature of “Old Men” is almost too much of a turn from the bombast of the previous tracks, with its acoustic guitar, wind instruments from guest Rob Townsend and gentle vocals from Beggs. But it’s such a sweet song that one can’t complain. We then enter “The House Where Love Once Lived”, a mostly-acoustic ballad with spacious percussion, tasteful guitar and dreamy vocals that ponders the future of a house well-lived and what its future owners may inherit. Again, this track takes a completely different direction from all previous songs on the album and once again, The Mute Gods succeed. One of the highlights on the album, amidst impressive competition.

“Iridium Heart” brings in more of the quirkiness and edge of previous The Mute Gods albums, notably through Beggs’ spoken and processed vocals. We do not learn from our mistakes, history teaches us nothing, and Minnemann is back with force to pound the point across. A former devout Christian for many years of his life, Beggs has been caught in the battle between being an Atheist and a Believer for some time, and this tug of war comes to play in “Twisted World Godless Universe”. It’s an intense juxtaposition of light and dark, portrayed in its lyrics and musical arrangements. King’s keyboards and Minnemann’s drums help to magnify the swirling conflict as Beggs switches back and forth in his vocals to defend both sides. As the album heads towards its end, these two tracks have taken us into darker territory sonically and we need some relief to bring us closure. Fortunately, we find “I Think of You” waiting for us, a haunting instrumental piano piece that proves Beggs is willing to go in any direction to share his muse. Written for his mother who passed away when Beggs was only 17, this is a touching tribute, reflecting on our mortality and perhaps fragility. It seems a fitting and personal way to end this album which has wrestled with themes of the human condition.

If The Mute Gods seem to be hitting their stride with album number three, it may have come a bit too late. Beggs is unsure what the future may hold for this project; he initially set out to record a trio of albums and after that the future is mysteriously silent. But that kind of plays in to the band’s stance about humankind too, doesn’t it? Whatever the future may hold for any of us, what is certain is that Atheists & Believers is an excellent album that should be enjoyed here and now before the tardigrades take over…’cause they ain’t going to be making music as achingly satisfying as this any time soon.

Third album “Atheists & Believers” sees The Mute Gods coming into their own with an engaging, diverse set of songs. When Steven Wilson said he was being influenced by pop art bands of the ’80’s for his “To the Bone”, this is the kind of sumptuous album that could have resulted. Nick Beggs’ songwriting and performance is triumphant and uplifting, even as its subject matter is serious and conflicted. Excellent playing from band-mates Roger King, Marco Minnemann and guests, along with King’s sterling production make this a gem of an album that hopefully will get an airing in concert one day