People will be approaching Terraformer, the third album from Thank You Scientist from a lot of different angles. Of course there will be those who have never checked out the band before, and excited current fans ready and waiting for new material. Of that latter group some may have expectations set by the advance singles from the album, along with their rather outside the box videos. But what will really set this release apart as far as fan expectations are concerned is that by my estimates the band played roughly half the new album on their recent month long tour of American and Canada with Kindo and In the Presence of Wolves. Thousands of fans including myself effectively formed a first impression of the new album based on its live presentation and we now approach the fun point of seeing how people’s memories of the songs live merge with what they hear on the album due out on June 14th. Fans have also been treated to new drummer Joe Fadem, saxophonist Sam Greenfield, and trumpeter Joe Gullace in the live lineup for a year and a half now, but the trio makes their recorded debut on this album.

From the moment this album was announced I knew I’d be keeping a critical ear to it as the runtime clocked in at eighty four minutes, which meant to a fuddy duddy CD collector like myself that the music would need to be split over two discs to accommodate four minutes of music. That means, somewhere in an eighty four minute span my listening experience will be interrupted, and perhaps far more critically I will be expected to walk across my living room in order to change discs. Stephen King couldn’t write of a greater horror. A near perfect album would require me to say after several listens that there is absolutely no way you’d want to cut any four minutes of material, and my live impressions at least led me to believe that may well be the case. Of course some out there might say a majority of people are going to listen to this digitally and none of this matters, to which I say get off my damn lawn. Now, onto Terraformer.

The album is a refinement of the classic Thank You Scientist sound, driven in part by the core of the band’s identity. The fact that they are a progressive rock band that uses little to no keyboards (or live backing tracks), and includes a saxophonist, trumpeter, and violinist as full time members forms a pretty unique identity. That identity can also serve to keep them from deviating too far from the sounds one might expect. That being said new saxophonist Sam Greenfield also brought an electric flute/wind instrument into the fold for this album, and guitarist Tom Monda added some additional sounds with a samisen, most notably on the penultimate track “New Moon“, and a fretless guitar on the closing/title track. The band continues to write in a semi-long form way, with most tracks clocking in between six and ten minutes. The band still lacks the long epic of a more traditional prog band, but continues to stay away from the simplistic single formula of a rock band. While it may sound like I lament this fact reality is quite the opposite, I’ve always appreciated that they can hook you in with a pure rock vibe, and give you reason to keep coming back with writing and musicianship that matches prog’s finest. 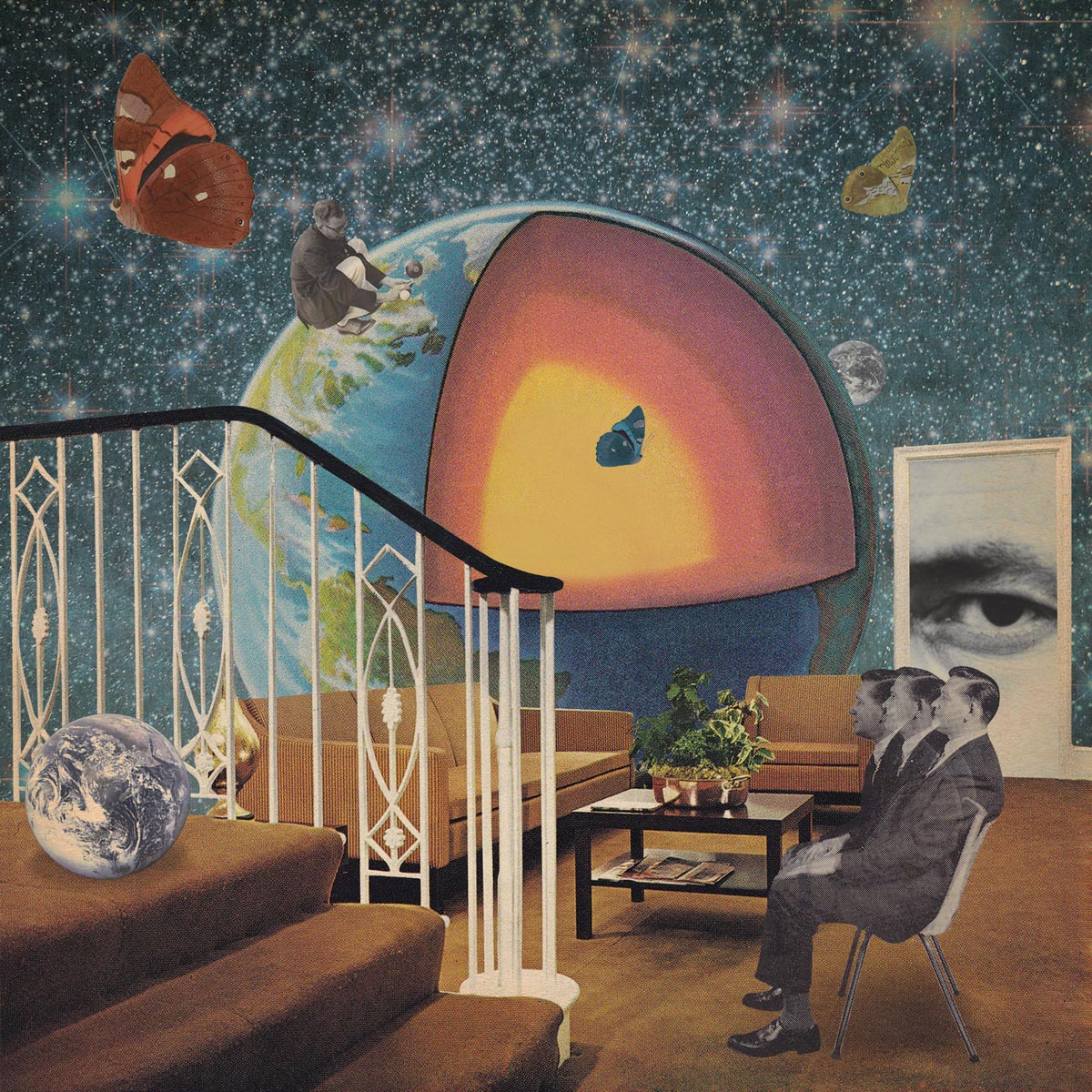 This album continues a trend of those somewhat longer tracks not feeling as long as they are, with instrumental sections typically focused and loaded with plenty of hooks. Be it stellar guitar work, vocals, or the regular punching in and out of the trumpet/sax, every track has its upside. It’s only because of the overall length of the record that one might become fatigued on later tracks like “Life of Vermin” or “Anchor“. That said listening to those track on their own almost certainly won’t elicit that same response. The album also features several shorter tracks or interludes, and as most tend to stand out as different and help pace out the album. The world’s first taste of this album was the eight minute X-Files inspired single “FXMLDR”, but before that kicks the album into full gear we’re eased into things as “Wrinkle” builds things up to start off the album. A few tracks later “Birdwatching” is a soft and smooth track with new drummer Joe Fadem bringing an electronic drum pad to the mix and using it wonderfully. “Shatner’s Lament” is the only track that I’d chalk up as a simple interlude, with no real purpose other than to break things up. “New Moon” is a beautiful and serene two minutes with Tom Monda’s samisen and a light orchestral backing that really separates itself from the rest of the album. It’s also a treat to hear vocalist Salvatore Marrano on this track, a high energy vocalist singing over a much softer section than one is used to hearing. I would love to hear the sounds in “New Moon” and “Birdwatching” incorporated more into other songs, and we perhaps get one tow in the water on a song like “Anchor”. As is the album seems well divided between the traditional and experimental.

As for the longer tracks that make up the bulk of the album, perhaps the simplest thing I can say, also perhaps negating a lot of time spent typing, is check out those songs already released to the public, “FXMLDR” and “Terraformer”. I find both tracks represent the album very well, and if you like them you probably will like Thank You Scientist and you almost certainly will enjoy their new album Terraformer. Song after song their ability to weave in non-traditional rock instruments into stunning compositions shines through, and the same can be said in the mix which manages to give everyone time to shine. “Son of a Serpent” features near its end one of Tom Monda’s several highlight guitar solos. The instrumental “Chromology” is unsurprisingly is full of brass and woodwind flare, but also points a spotlight at violinist Ben Karas to show off a bit. Generally throughout most of the songs you’ll pick up highlight moments from the individual players, though through most of the material a solid song structure takes precedent over individual flash. Bassist Cody McCorry and drummer Joe Fadem form a stellar rhythm section throughout the album. Founding members Tom Monda and Salvatore Marrano ensure through guitars and vocals that the album is unmistakably Thank You Scientist. Violinist Ben Karas continues to be both an excellent accompaniment to Tom’s guitars at times and the perfect counterpoint at others. And finally the new blowing boys (note to self: need to work on that name), Sam Greenfield and Joe Gullace stepped right in to their roles and added that regular sonic punch to the music that fans have come to expect.

Circling back to the big question I posed earlier, does this album deserve to be split over two discs? Yes and no. Aside from “Shatner’s Lament” there isn’t much that I’d call filler, unnecessary, bad, or otherwise easily dropped. The album is nine fantastic songs with a classic Thank You Scientist sound and mostly excellent shorter works woven in. That said this music is a lot to take in, and generally speaking the run time of the previous two albums, fifteen minutes shorter at least, seemed more digestible. I can’t help but feel cutting a song or three for a future album or digital only release to keep the primary album to a more manageable length, all while amplifying those remaining songs may have been to some benefit. However I suppose if one of my primary complaints is that there is too much good music on Terraformer, then things are looking pretty good.

Is this my favorite Thank You Scientist record? It’s hard to say, the debut holds a special place in my heart and has several tried and true anthems that have held up for many years now. That being said Terraformer joins its two predecessors as being an excellent effort from one of America’s great young bands, aided by fresh blood and their most refined sound to date. Picking between their albums at this point might as well be like picking your favorite kid, although the music will bring just as much joy for far less cost and sacrifice. So really the point I’m trying to make it, why have kids/more kids when you can just buy Terraformer? Yeah, that sounds like solid advice.

Through their first two albums I’ve considered Thank You Scientist to be one of America’s premier young bands, and I’m happy to say that after changing 3/7ths of their roster they continue to hold that title. Terraformer takes an already unique identity and adds some new sounds along with plenty of the excellent songwriting and musicianship to be expected from the band. For having six distinct primary instruments and a vocalist a lot of credit is given to the production of Terraformer for once again allowing the sounds of this band to shine. If you like your rock a little longer and technical, or your prog a bit more high-energy, but clean and polished, then this album will be for you.