This month marks a historic milestone in metal; Tarja Turunen, the Flower of Finland, the Siren of Suomi, will have five solo rock albums to equal the body of her work with Nightwish from 1996 to 2005. This should go a long way in establishing there is more substance to Tarja than her involvement in a previous project. Naturally, we are never far from our histories; Peter Gabriel may have one of the most prolific solo careers after fronting a band, and even now, forty years later the man cannot have an interview without being asked about Genesis. With that in perspective, Ms. Turunen may always be tethered to the band, but it need not define her, and her newest album, In the Raw, goes a long way in defining Tarja the individual for the music world at large.

Tarja’s daring new 2019 In the Raw album charts a new course, with new textures, themes and elements to continue to differentiate Tarja from the rest of the scene. In the metal world, be it symphonic, power, or prog, we unfortunately must deal with the reality that some of the icons of the voice lose power and range with the passing of years and the rigors of touring life, be it Geoff Tate, James LaBrie, Glenn Hughes or even the great Bruce Dickinson himself. Granted, these gents remain in fit fighting condition and are nowhere near a state of Don Dokken or Vince Neil, but they are not singing as they were thirty years ago. Tarja herself has been doing this for some years now, but here is the thing: a Prima Donna of opera is a whole other creature from a man of traditional metal. A woman’s voice, trained for opera, and properly cared for, does not begin to hit its stride until the singer is 30, and does not reach peak perfection until 50 in some cases. This is why, in works of Verdi and Wagner, we will often see the first lady, normally soprano, playing the part of a much younger character in the story. After all, the character Isolde was probably seventeen or eighteen, and yet is usually performed by an experienced singer in her forties.

One cannot appreciate operatic metal without the opera; the point of this brief lesson is that if you were worried that Tarja’s years since Nightwish have in any way diminished her range, power, control, or overall performance, you can safely and confidently check those concerns at the door. After hearing this newest album, it is clear Tarja is only now realizing her full potential as a vocalist. More importantly, she is also truly coming into her own creatively, which is the most important ingredient in any significantly memorable album. 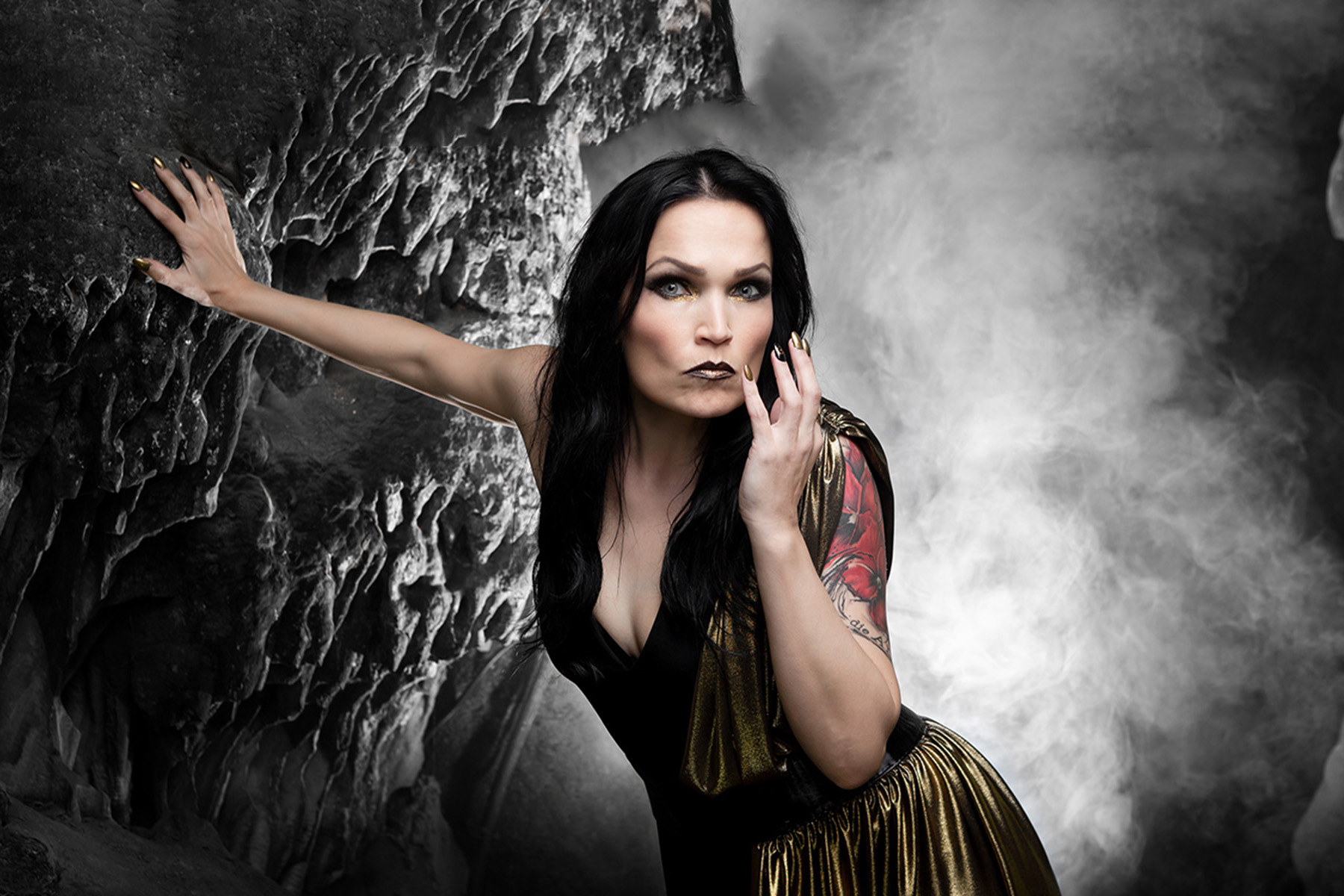 The album kicks off with a “raw” introduction, a lead guitar riff consisting of alternating open notes on the high E (think of Iron Maiden‘s “Wasted Years”) with no accompaniment at all. However, drums and rhythm guitars are added, and eventually a layer of “ahhhs” by Tarja, before the song starts really riffing and crunching along. Although structurally, this song, “Dead Promises,” is fairly standard Tarja, the feeling and texture are a very rough and unpolished metal. Paired with the supporting vocals of Soilwork’s Björn Strid, the song does a respectable job of demanding the listener’s attention. While there are no wild pyrotechnics of guitars or keyboards, the song has enough novel elements to keep it listening, and a good opener.

The second track, though. The second track, “Goodbye Stranger,” is the one that grabs you by the lapels and says, “check this out.” Featuring Italian Bellissima Cristina Scabbia of Lacuna Coil, the song starts normally enough, with drop-tuned riffs and pounding 4/4 drumming, but it’s the two-part vocal verses that are just, well, really cool. It’s the kind of thing you have to hear. The soaring choruses are great, and the guitars paint such a disjointed gothic landscape for the song, not quite a Kenny Hickey “October Rust,” but that kind of feeling. According to Tarja, she prefers loud drums and guitars to surround and support her vocals, rather than softer instruments leaving her feeling isolated. This concept, of course, was the genesis of Nightwish with Tuomas and Emppu. However, it is clear that this album is movement away from the grandiose symphonic production feel of Nightwish. Instead, for this track, Tarja comments “it feels super different to write a song where the power comes from drums, bass, guitars and voice only. But that’s how I love it! The song has a special airy, light, spatial, floating feeling on it despite being very heavy at the same time.”

The third song, “Tears in Rain,” acknowledges its inspiration by the late great replicant Rutger Hauer, and presumably a hint of inspiration by the similar lyrics by John Sykes and David Coverdale. In some ways, it is a “usual” Tarja song, although it does have some fun kinks. A rising “ahh ahh” vocal chorus harkens back to a certain “Twist and Shout,” along with a rapid-fire snare-blasting section in the middle, a little like how Cheap Trick’s “I Must Be Dreamin” opens up on the Heavy Metal movie soundtrack. Lyrically, the song does capture the sentiment of the Blade Runner finale, although Kansas also waxed philosophically along similar lines in “Dust in the Wind.” It was good enough for Socrates, anyway.

Next up is, “Railroads,” could very easily be a favorite of this record for us and many. The verse structure is absolutely catchy as hell, and the choruses give Tarja plenty of room to spread her wings and soar, will all her range and technique. Regarding the subject matter of the song, she reflects, “it seems like I wrote weird lyrics, yet I pulled inspiration from one book. Paulo Coelho is a very important writer, and I have discovered a lot about myself through his texts. In ‘Aleph’, he goes on a train journey through Siberia, and he writes a book based on his experiences on that trip. I wanted to go beyond everything and think about myself and my own journey. The whole album is a journey, in a way.” Evidently, this is a song she has been tweaking and working for almost ten years, but she needed exactly the right lyrics, and reading the right book just made everything click into place creatively. Whatever her formula, it’s a lovely song. 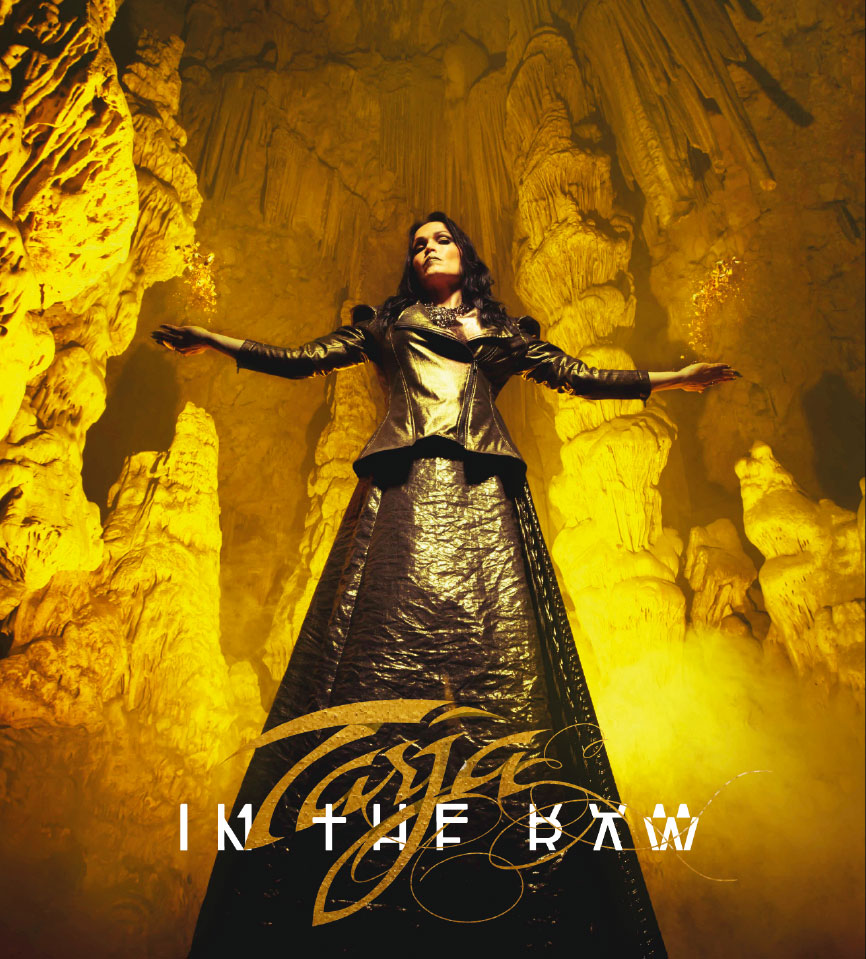 “In The Raw” Album Artwork

Aside from her love for singing as a part of a wall of sound, Tarja is not immune to the allure of a vocal solo showpiece, and “You and I” serves as one such example. Much of this ballad consists of grand piano and strings supporting her delicate vocals as they float through musically ear-pleasing melodies. She prefers writing by piano but felt the strings section was necessary to make this song complete. “I love the simplicity of this song, even though the massive sound of the orchestra can make you feel the beauty of life,” she comments. “It almost feels like a celebration of life! The story on this song could mean a world to so many.”

“The Golden Chamber” is a film score transition to the second half of the album, although it does allow Tarja an opportunity to vocalize without lyrics, and glide over top of the symphonic arrangement and create some mood. Some of her better upper-register soprano work can be heard in places here. This transitions into “Loputon Yö,” a small lyrical Finnish piece meaning “Endless Night.” However, any happy peaceful feeling the listener internalizes is quickly chewed up mercilessly by the next track, “Spirits of the Sea,” a murky cold dead thing conjuring the atmosphere of submariners lost at sea. The arrangement is dark, the guitars are vaguely wrong, and the percussion is like pieces of abandoned junkyard scrap flapping in the wind. In other words, a perfect setting for the delivery of this depressing little dirge.

“Silent Masquerade” is a captivating little theatrical piece, very noteworthy for featuring Tommy Karevik of Seventh Wonder and Kamelot fame (yes, we love Tommy). The song begins and ends with some reflective narration, and the musical middle of this particular creamy Oreo is a well-arranged balancing act of distortion guitars, piano, strings and percussion. Tarja and Tommy do a great job playing off each other’s parts, and the song ends up being a powerful piece equally at home on Tiara, or any of Tarja’s best previous work.

“Serene” is a big bold rocker, most notable for its bombastic percussion. The song is a reflection of Tarja’s experiences and feelings of parenthood:

Dream high
and I’ll open up the sky
Stay true
It’s all inside of you
Black skies, light up diamonds in your eyes
and break through
I live inside of you
Just fly
Over the night
and you’ll soon wake up to see
Everything’s serene

The final track, “Shadow Play” is anything but understated. Which is fine; big productions are always welcome. Tarja says of the finale, “I have always loved theatre and drama. Writing a story about a marionette’s life was inspiring and beautiful. I wanted to write a song that had a massive orchestra to finish my album with a bang.” Whereas much of the album is stripped-down to muscle-car basics, this track pulls all the stops, and has everything from a full metal band, to symphonic arrangement, to piano, to choir vocals, and of course, she letting it rip for all it’s worth. The last two minutes of the eight-minute track just keep building in elements and intensity until a massive crescendo and a crashing finish.

We were not certain what to expect of Tarja’s fifth solo outing, but it was not this. This was Tarja taking the time to collect her thoughts and creative instincts, get back to basics, and do something not only new, but absolutely her own. The arrangements are compelling, the musicianship is very strong, and her voice and ability remain better than ever. This is shaping up to be one of the stronger entries into the world of prog and symphonic metal in 2019, and you would be doing yourself a disservice if you do not at least check it out. In the Raw hits the street at the end of August, but you can preorder it at all the usual online retailers, or from Tarja’s main link here.

“In The Raw” Track-Listing:

If you are a fan of Nightwish, with or without Tarja, you will enjoy this album. If you have been a fan of Tarja’s other solo work, then this one is a no-brainer. This may be her best solo work, so don’t even think about it. You will love this one. Much of the album is stripped down to contemporary metal basics, while still showcasing Tarja’s voice at its very best. Yet, there remain some symphonic treats for her old-school fans. It is a diverse album with a little something for everyone. Definitely check it out