Somewhere in the 70s, lodged between Renaissance and Steely Dan, America and Fleetwood Mac, this little nugget from Sweet Invention lay buried. The fact that it remained unwritten for over 40 years is of no matter as long as it finally has its day in the sun. Now unearthed by Randy and Pamela George’s skillful hands and voice, these songs feel fresh thanks to a clean sheen from producer Rich Mouser. And just in time, as what the world needs right now is uplifting and engaging music, suggesting brighter days ahead while having enough musical muscle to enjoy the here and now. “Streaming Out the Day” may only be an EP of four songs, but in a short span of time it opens up a bright, wide vista of new music rooted in vintage years.

The George’s are now one of prog rock’s premiere power couples, harnessing their combined strengths to produce a recording of surprising strength and versatility. Randy George is first and foremost known for his bass playing on nearly all of Neal Morse’s progressive rock albums since Morse left Spock’s Beard nearly twenty years ago. His prowess on other instruments such as guitar and keyboards may come as something of a revelation to those not already in the know. Combined with the warm and emotive vocals of his wife Pamela and the drum talents of Scott Connor (Circa, Prog Collective, Yoso and William Shatner), this is a formidable “band”. Indeed, let’s establish at the outset that the biggest liability of Sweet Invention is that they have only released four songs thus far. 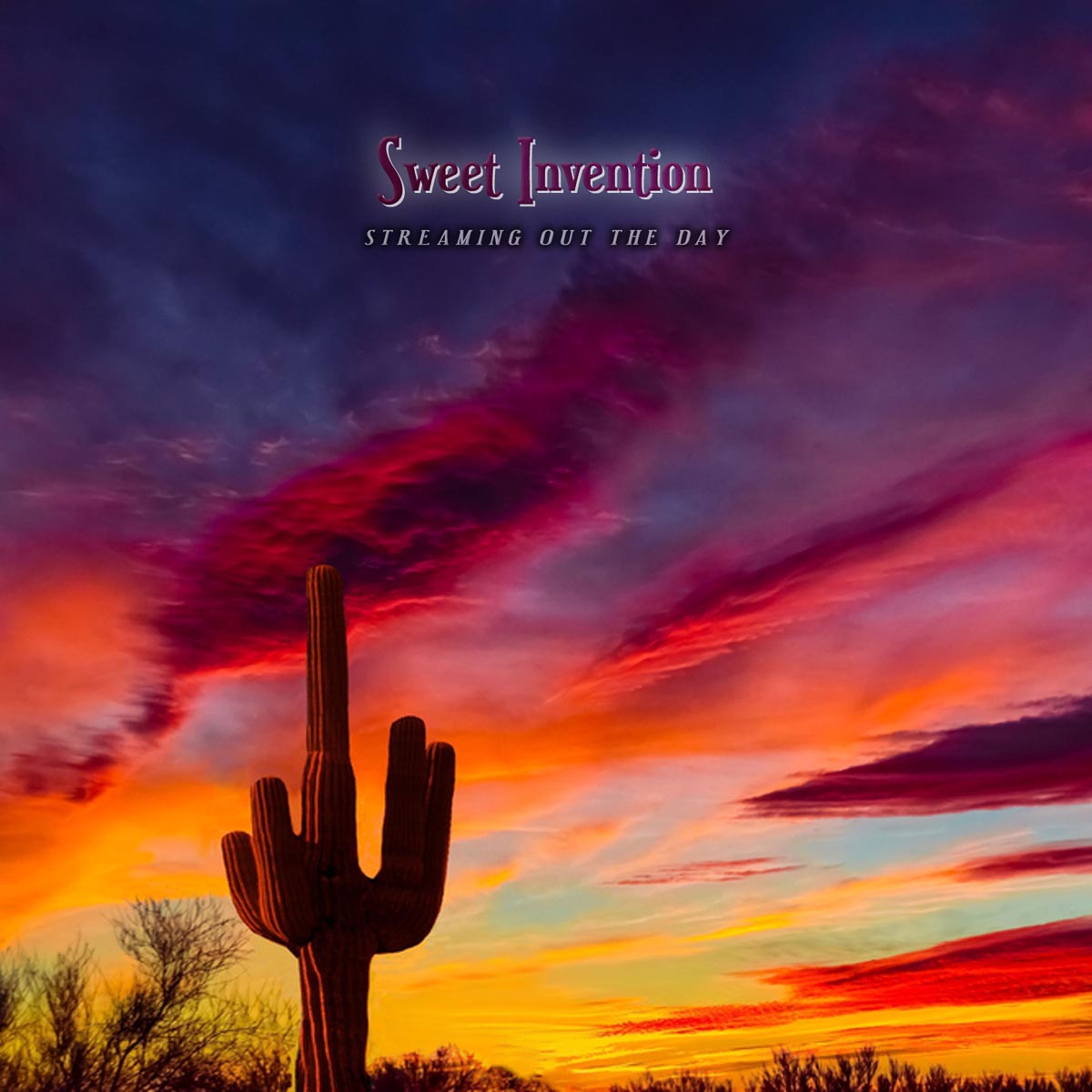 “Streaming Out The Day” EP Artwork

“The Desert Song” commences with an opening percussive section to set the groove as Pamela’s vocals ring clear and true. This is the kind of voice that you swear you’ve heard before, familiar and refreshing, making the material shine. Stars and moonlit skies dancing in the night. It’s a very happy-making beginning with a catchy vibe to it. “Calico Man” starts off with much the same atmosphere including an entrancing chorus, but at eight minutes in length there are more twists and turns in store. Randy’s guitar comes to the fore in his lead playing and power chords break open up the space for Connor to hit satisfying fills during a wonderful proggy middle section. On “Teacher” Pamela’s voice lays beautifully over piano arpeggios and bass tones for a satisfying vocally-driven song from which the band’s namesake and EP title come forth in the lyrics. The final minute of the song segues into more of a latin jazz vibe complete with a Steely Dan-style guitar solo which sets up the subsequent instrumental track nicely. “Poor Mister Weasley” closes the recording with a jazzier number a la Larry Carlton where Pamela gets to stretch out a bit on a clean electric guitar, delivering melodic runs which she wrote, including some nice octave choices. Randy then takes over the second half of the song with a discernibly different tone and approach to guitar playing. Adding in some bass runs and well-arranged supportive piano, this is a lovely piece which could continue far beyond its five minutes.

The George’s have wisely enlisted friend Rich Mouser to oversee the mixing and mastering which ensures that the sonic result is as crisp as an autumn desert night. Between Mouser’s production and Connor’s skillful percussion, the groundwork has been laid to let both Randy and Pamela to do what they do best. The result is an excellent outing which impresses while clearly leaving room for wanting more. Much, much more. Highly recommended.

“Streaming Out The Day” Track-Listing:

Husband and wife duo Randy and Pamela George offer a warmly engaging recording filled with musical dexterity and inviting vocals. Like a long-lost gem from the 70s, their sweet invention should please a wide range of rock fans who appreciate catchy, well-written and performed music. Though only four songs in length, this is a generously rich recording that beckons more material to come.