In an age where the word “reinvent” is heralded among the newest pioneers of metal, there has been something dark growing in the misanthropic cesspool of filth left behind by the original black metal scene. In all of their depravity, Norwegian black metal band Svarttjern have summoned from depths of some unspeakable hell their fifth album, titled “Shame is Just a Word.” Blistering brutality and raw aggression define an album that lacks the polished studio presence of their modern day counterparts, calling back images of frigid Nordic winters and a desolate realm of unforgiving ice that were once painted by the genre’s legendary founders.

Shame may be just a word, but listening to this latest offering is enough to make even the most hardened heart shiver with some combination of disgust and euphoria. Distortion forcing crackling static across racing guitars is an immediate immersion into the nostalgic brutality of early black metal, a certain distant edge to each recording that seems to echo in its unpolished state. This is an atmosphere that Svarttjern have crafted intentionally and carefully, as there are moments when the static fades and dazzling guitar solos take the lead, emerging from a shroud like a star exploding into being at the center of the stage. Though they have tread closely to the tenets laid out by the bands that came before them, it seems that Svarttjern are unafraid to show off not just versatility, but unabashedly superb musicianship.

One such song that is demonstrative of their abilities to tread effortlessly through the veil between the chilled winter of pure black metal and bright flourishes of rockstar-fueled guitar solos is “Ment til a Tjene,” the album’s second track. The pacing throughout is relentless, bearing down on somewhat repetitive but unceasing drums, which pause only to let vocalist HansFyrste let out guttural roars that seem to come from the beast itself. With howls deep enough to splinter through the haze of percussion and throaty bass, the music creates an all-encompassing shroud that rains down in a mixture of the musicians’ native Norwegian and English. But as the song nears its conclusion, guitarist HaaN comes through with blindingly crisp precision, delivering a guitar solo that cuts like a knife with its speed and clear dexterity. Such a vibrant touch breaks the illusion that Svarttjern is merely some forgettable spectacle, and firmly places them in the realm of the musically adept and stylistically noteworthy.

An established sound and persona also drives the depravity found within nearly an hour of brutality, punctuated by instantly memorable choruses that pierce without remorse. One such example is the equally lustful and hostile “Ravish Me,” allowing HansFyrste to scream through a split moment silence, roar reaching a keening howl across the momentarily quiet plains. As a vocalist, his skills include the near impossible task of reasonable enunciation while allowing his gravelly vocals to marry with the deep vibrations of the distorted bass, somehow also maintaining this depth with impressive endurance for the duration of each track. It paints a complete picture of black metal as it was meant to be consumed, as a never-ending cascade of annihilation, the shrieking winds of a storm in the dead of winter. 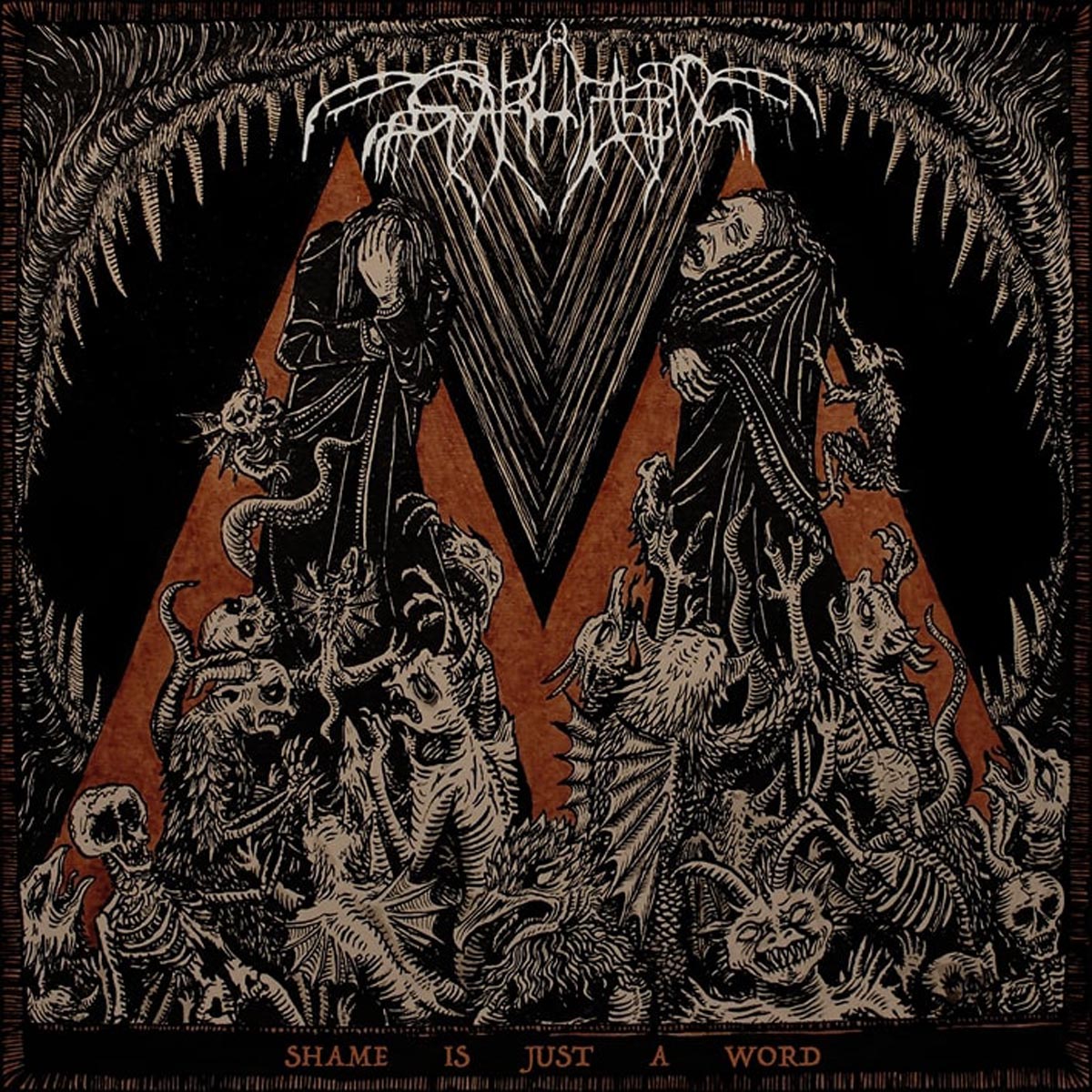 Of the many noteworthy tracks on the album, title track “Shame Is Just a Word” certainly deserves a mention in this review. It is the final showcase of yet another skill that Svarttjern have tactfully developed over their nearly two decades of operation. Although speed is an essential defining factor of their style and songwriting, “Shame Is Just a Word” plays with pacing and tempo throughout the track, ebbing and flowing in a sharp, jarring manner that completes the harshness of their manufactured image. This is also the track that holds the most surprise, including a near complete takeover from a haunting synth that adds a surprisingly warm bite to the hypothermic hatred that dominated earlier songs. To hear this breath of stylistic daring alongside prior showcases of musical prowess proves that Svarttjern stands as more than just a passing phase, and more than deserve their accolades in the world of metal.

Beyond merely memorable, “Shame Is Just a Word” balances the magic of raw black metal with the vast array of capabilities offered by modern production. While they often stay true to the atmosphere developed by their predecessors, their hatred is delivered with a rare sense of sincerity. To hear something so brutal in 2020 is a testament to the care put into recreation of an unmistakable, undeniable sound that strives to do anything but reinvent a classic genre. Though there are moments where an unexpected flair pulls the listener out of their misanthropic fugue, this does nothing but add to the unique thrill of Svarttjern’s impenetrable and wretched brand of darkness.

“Shame Is Just a Word” Track-listing

Svarttjern is a frigid dose of Nordic winter delivered by brilliantly talented musicians that stay true to the spirit of Norwegian black metal while still managing to make a clear display of their technical dexterity. Complete with fleeting flourishes of their own unique production and modernity, “Shame Is Just a Word” captures misanthropic repulsion in a brutal, near-nostalgic onslaught of annihilation.