What in God’s name is going on with Stryper these days? Despite an ugly and rather public break up with former bassist Tim Gaines, Stryper has forged ahead, licked their wounds and banded the Sweet brothers (Michael and Robert) together, along with Oz Fox, to bring us another slab of faith-infused studio songs. (The new face in the band, bass player Perry Richardson, did not play on the record so the upcoming tour will be where he earns his “Strypes”).  Never shy on a controversy, the band seems to have intentionally stirred the pot with the new record’s title, God Damn Evil. Are they swearing? Or praying for justice? It’s ambiguous enough to piss off some of the flock. But that’s how it’s always been with Stryper.

When Stryper’s landmark To Hell With the Devil hit MTV hard, many churchgoers were divided about their big hair, spandex jumpsuits, and heavy guitars. For those who believed the message of the church but had no use for the surface judgments that had more to do with tradition and control than biblical mandates, Stryper was a Godsend. They gave us license to rock for the rock, as they liked to say. Target practice was easy for the naysayers. The drastic heights of the aqua net hair. The iconic eyesore of the yellow and black attack wardrobe and staging. The saccharine sweet ballads that brought ladies out to a metal show. Love them or hate them, Stryper was doing their own thing.

More than 30 years later, they still are. The fashion, hair, and ballads have all been toned down, but the guitars have been cranked up. Lead singer Michael Sweet has traded his feminine-sounding falsetto to claim his place among the upper echelon of stratospheric screamers like Rob Halford and Bruce Dickinson. The guys are confounding middle age gravity with insane vocal ranges. Need proof? Check out Stryper’s renditions of “Breaking the Law” and “The Trooper” from 2011’s The Covering. Halford has publicly praised the band’s tributes to their influences like Scorpions, Black Sabbath and UFO, and it signaled a move into heavier territory. God Damn Evil is the third part of the band’s metal trilogy of studio albums for Frontier Records, an Italian label that has given countless 80s acts a rare chance to extend their shelf life. Stryper has rewarded Frontiers’ faith in them by delivering a trifecta of heavy, punchy, memorable metal records that stand up to—if not out power—the best of their entire catalog.

That’s not to say that God Damn Evil is perfect. It’s certainly not. Just forgiven. 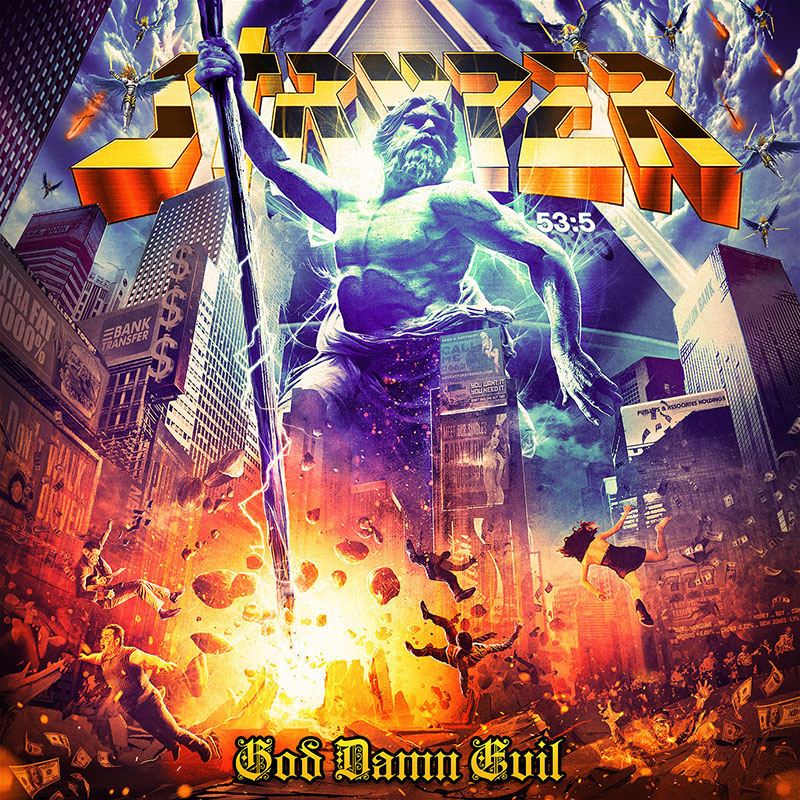 In fact, the opening track, also released as the first single, has given many the need to extend a bit of grace and mercy to the boys. Honestly, the chorus of “Take It to the Cross” is a sin. And by sin, I mean the biblical definition of “missing the mark.” They took a shot at adding an element of thrash and death growls but ended up losing the sound of Stryper.  Michael Sweet screech’s in an ungodly high range that grates on the nerves much like Halford’s “Painkiller” did. “Take It to the Cross” will probably go down as one of the more misunderstood lyrics in metal. (I know the words, but I could swear I hear “Chicken in the House!”) This is not the opening salvo hoped for. Too bad about the chorus, because the verses of the song are solid. Sweet has responded to the mixed reaction that they wanted to try something new and had a blast doing it. So, there’s that.

The second single released, however, rights all wrongs. “Sorry” is a fierce, plodding rocker that showcases the things that really work on this record: chunky, melodic rhythm guitars with soaring solos, fat, thumping drums that are loud in the mix, heavy, catchy compositions and Sweet’s distinguished voice that sounds amazing most of the time. Let’s be honest, there are a few screams where Michael is violating the rule, “Just because you can do something doesn’t mean you should.” But his pipes are working remarkably well still. And he’s written a batch of really strong songs, with just a few asterisks. Unfortunately, the second asterisk is the chorus of “Lost,” the third track.  It starts off so promising…the chugging riff and verses set up an urgent payoff that never comes in the chorus. “Lost” loses all intensity and momentum with the slower paced, repetitive chorus asking, “Are we lost?” Different track. Same problem as the opener.  But the good news is that the rest of the record shines like a sterling silver cross in your pocket.

The title track is a mid-tempo rowdy romp with an extended solo section that’s pretty heavenly. Whether it’s a prayer or just a way to give people something to talk about, Sweet seems to be enjoying himself immensely in the chorus wailing, “God save the people, but God damn the world!”. “You Don’t Even Know” is tight rocker that’s reminiscent of UFO in both function and form, calling out the damage done by judgmental tones from either side of the stained glass. Next up is a sludgy, marching battle cry. “The Valley” contains all the elements of this new and improved Stryper, leaving an empowering call of hope to those who find their strength in God (It’s Stryper…you know what you’re going to get!). A wah-wah heavy solo fits right alongside the huge, shiny background vocals that sound like a metal choir.

“Sea of Thieves” is a blistering, bluesy jaunt that’s got a triumphant chorus that was built for fists in the air live. The big background vocals are Stryper-shiny without sounding wimpy. “Beautiful” stands out with an angular verse that sounds like old school Dokken and a glorious chorus that manages to weave in the words “Beautiful,” “Wonderful” and “Meaningful” with no apologies for cheese or dip in rock intensity. The closest thing to a power ballad on the record is “Can’t Live Without Your Love,” which is a slower tempo love song with enough crunch and movement to keep it out of the saccharine territory of the old hits like “Honesty,” which sold well but hurt the band’s credibility with the hardcore metal fans. “Own Up” is another strong, in-your-face rocker that features enough cowbell to keep Christopher Walken happy for hours of studio time. The closing track, “The Devil Doesn’t Live Here,” is a “Hot for Teacher” knock-off that trades schoolboy fantasy lyrics for a sermon that includes the “J” word and some amazing screams. While a few deductions in the score might be in order due to plagiarism, the execution is so good that most of it can be forgiven.

Haters will hate and some people will exercise their own form of prejudice by dismissing Stryper because they are anything but subtle about their faith. But regardless of where you stand on the lyrics, there’s no denying that production is excellent, and the performances are inspired. Stryper is rocking so hard and well that even some close-minded skeptics are bound to be converted. And I say “amen” to that.

Stryper hits three for three on their last string of studio albums, getting grittier and heavier without sacrificing song like-ability. For those willing to embrace or ignore the Christian lyrical content, solid metal bliss awaits.