As they cross the globe celebrating their 50th Anniversary, the mighty King Crimson continue to leave their mark on progressive rock in more ways than one, not the least being the many offshoot ProjeKcts and other ensembles that have been spawned in their wake. Such is the pedigree and devotion of the musicians involved that even when Robert Fripp himself isn’t in a particular grouping, the aura of his influence is still felt yet again. Cue the music of… Stick Men.

Although Stick Men is primarily the trio of Markus Reuter and Crimson alumni Tony Levin and Pat Mastelotto, they truly come into their own when joined by special guest David Cross on violin and keyboards. With three different decades represented from Crimson’s history – Cross starting in the 70s, Levin in the 80s and Mastelotto in the 90s – there is more than enough credibility to include a healthy dose of material from that band in the Stick Men set-list. Equally important as any specific songs “covered” in the set is the ethos of the musicians’ approach, which is heavily rooted in improvisation. And this is why a 5-disc set recounting the band’s travels across Central and South America may be of interest to their more devoted fans, though not an ideal starting point for a newcomer. “PanAmerica”’s main full show, which comprises Discs 3 & 4, has many of the same selections as their previous 2015 release “Midori – Live in Tokyo” which also featured Cross with the band. But as many Crimson aficionados will attest – given the endless supply of multi-disc live boxed sets continuously emerging from that band’s history – more is never enough, as there are innumerable nuances and variations on display in each song and improvisation as they are played night after night. In this case, not only has an excellent full show been captured live in Costa Rica, but the remaining 3 discs offer a deep dive into the improvisational nature of the band, culled from shows in several different countries.

Let’s start with the complete show first. The mix is considerably different from the “Midori” release, which will give completists a new vantage point from the get-go. After the traditional beginning with an “Improv”, the band launch into two of their fine original pieces “Hide the Trees” and “Cusp”, both of which establish the strength of Cross’ inclusion to the band. As a trio, Stick Men produce a dizzying amount of sounds: Mastelotto’s wide-reaching attack on his extensive percussive kit, Levin’s stick playing serving the role of a bassist and guitarist simultaneously, and Reuter’s Touch guitars and other effects soaring high overhead. Adding Cross into the mix is a secret weapon which enables them to more fully traverse the thrilling terrain of “Red”, “The Talking Drum” and “Larks Tongues in Aspic II”, and of course brings additional color to their improvisational nature. It feels like a natural fit, and the members themselves aren’t shy about praising one another. It’s endearing to hear Cross call Stick Men “The best rock band in the world!”

While much of the material is instrumental, a few pieces feature spoken word or sung vocals, offering a nice contrast. One of the most successful of these is “Crack in the Sky” which features Tony Levin’s smoky spoken vocals over an atmospheric groove, not unlike Robbie Robertson’s “Somewhere down the Crazy River” on which Levin also played bass. Reuter gets to have fun with his spoken section on the quirky “Plutonium”, and of course who wouldn’t love the genre’s theme song “Prog Noir”, sung by Levin? With blistering versions of Crimson’s “Level Five”, original pieces “Schattenhaft” and “Mantra” and much more, there’s plenty of material to keep Stick fans happy, as well as a generous dose of between-song banter and stories. You can even learn how to properly count-out “Mantra”’s time signatures, a much more daunting proposition than “We Will Rock You”. 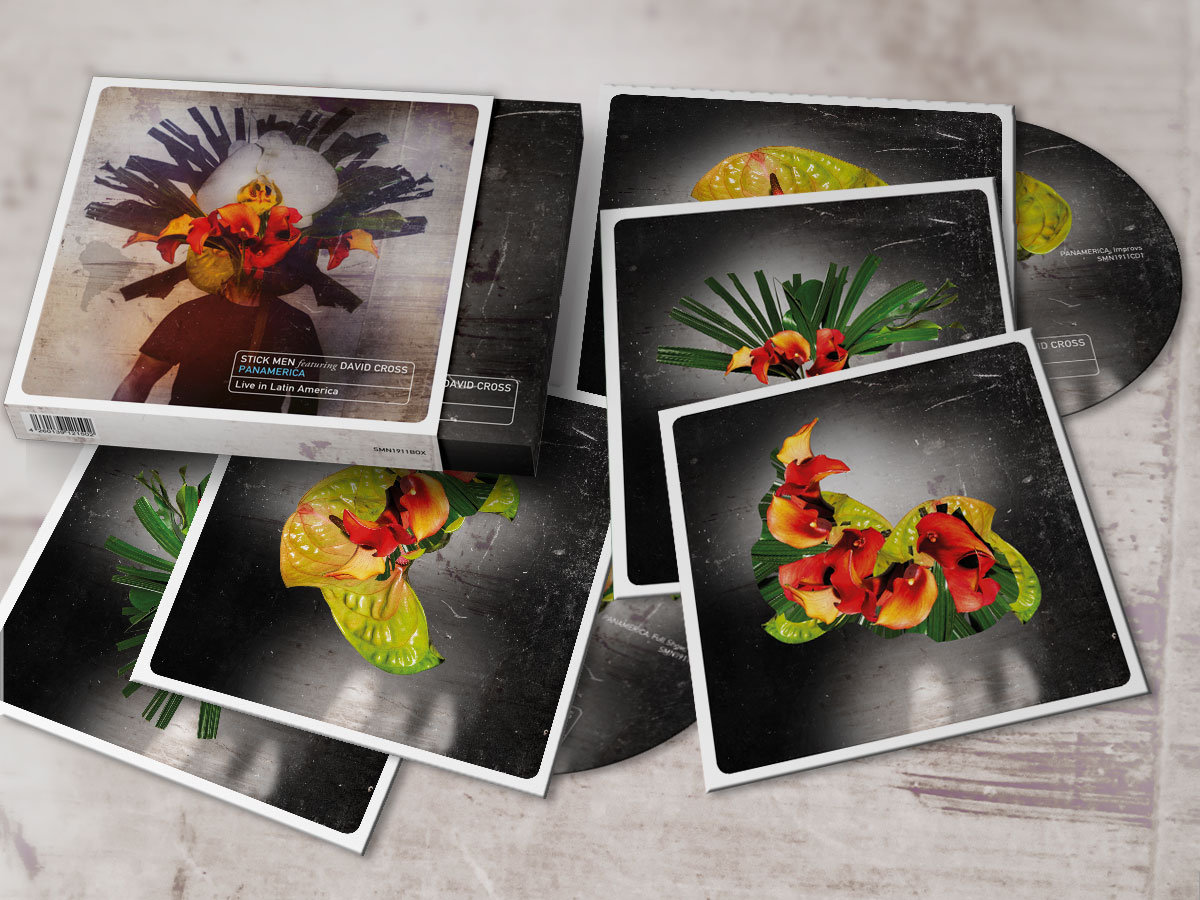 The real depth of this box set reveals itself in the other 3 discs, all of which are largely improvised. Disc 1 plays with extended and shorter versions of improv-based songs that are present in their regular concert set on Discs 3 & 4. For example, “Swimming in T” has a longer version on Disc 1 in addition to two shorter “Swimming Improvs” as well; the “Opening Improv” on Disc 1 is 12 minutes longer than the full-concert version on Disc 3, and we get two versions of the track “Open” as well as “Shades of Starless” which is a meditation on the Crimson classic. Disc 5 immerses the listener into soundscapes: relatively shorter ambient pieces which are heavy on the synth and without percussive accompaniment. These actually were sourced from using only the isolated improvised parts of Markus and David. The songs have been edited to run into each other without any audience applause, so the result feels like one continuous studio recording for the entire disc. Finally, Disc 2 features 4 longer “Suites” with each track being sourced from 3 separate pieces and then titled for the region in which they were played. These are the most interactive and engaging improvs of the lot, with some delightful percussion from Mastelotto, Levin’s stick holding down the lower end while Cross and Reuter unleash frenzied playing over top on “Montevideo Suite”.

The box set itself is beautifully packaged, featuring artwork by Hajo Müller with slip case, individual jackets for the CDs plus a 24-page booklet with exclusive tour photographs by Tony Levin. The music of Stick Men is not for everyone, and being that this 5-disc set focuses so much on improvisation it is likely that a newcomer would be overwhelmed. But for the faithful, this approach offers an immersive exploration into the development of the band over the length of the tour. And let us not forget that experimentation such as this is surely one aspect of what “progressive” music is all about.

The Stick Men trio are augmented by legendary violin player David Cross for a sumptuous 5-disc set which leans heavily on the improvised nature of the band. Of special interest to Crimson fans, especially those who are drawn to the world of Soundscapes and improv