In the fall of 2019, Toto completed the run of its “40 Trips Around the Sun” tour, which was a victory lap celebrating the “All In” box set extravaganza featuring remixed and remastered editions of the band’s classic canon with Sony Records.

The box set offered many sonic upgrades in particular to their older records, making the sonically perplexing “Turn Back” in particular a far more listenable recording. Though not flawless, it did package together a remarkable collection of studio records that featured many radio classics played flawlessly by studio musicians so tight that, to quote Ferris Buehler, “if you stuck a lump of coal up their asses in two weeks you’d have a diamond.”

It’s a reputation that has gained the members of TOTO massive respect with musicians and derision with critics. And that’s kind of sad, because in a day where music is fabricated and fixed by computers, these guys always had a remarkable ability to play, and even though the roster has changed frequently over the years, the level of musicianship never waivered.

The band is no stranger to tragedy, with two of the Porcaro brothers (Jeff and Mike) passing away prematurely. The band experienced a massive revival in their career with the unexpected success of Weezer’s cover of “Africa,” along with musical appearances on “Family Guy,” “South Park” and “Stranger Things.”

And so, just as the tour was enjoying tremendous success, Jeff Porcaro’s widow, Susan Porcaro-Goings hit Toto’s guitarist Steve Lukather and founding keyboarist David Paich with a lawsuit claiming unpaid money due to the deceased drummer’s estate. The lawsuit brought the tour to a bitter end, and though it has since been settled, Lukather clearly still is pissed off, and he uses this new record as a vehicle to air some of his grievances.

Toto is a dog of nine lives, and has been sent to an early grave numerous times, only to return like an animal from Pet Sematary. The difference being, many of us are really happy to see the beast come back once again, even if looking a little different than the last time we saw it.

David Paich has retired from Toto due to health reasons, and the relationship between Steve Porcaro and Lukather appears quite strained, so the one element of consistency, aside from Lukather, is vocalist Joseph Williams (son of famed Star Wars scoring giant John Williams), who came Toto as their third lead singer on record. These two seem to have forged a friendship and musical partnership that will be the next rendition of Toto, and each contribute to the other’s solo records, which are being released simultaneously.

Looking over Toto’s discography, it’s doubtful any other band has as many songs inspired by women, including “Rosanna,” “Pamela,” “Carmen,” “Anna,” “Angela,” “Lea,” “Lorraine,” Melanie” and “Chelsea.” Lukather’s solo record carries on the spirit as it appears to be motivated by “Susan” (his former band mate’s widow) and “Amber” (his newest girlfriend).

The record opens with “Along for the Ride,” a spiteful rocker that puts Lukather’s signature tone up front and center, balancing a lighter verse with an adrenalized fuzz chorus that instantly establishes that though now in his 60s, Luke has not lost his edge. It’s unclear (though conceivable) that the lyrics are pointed at Steve Porcaro, whose last name likely entangled him in the fallout. The song basically lambasts a person for riding on Luke’s coat tails and living high while complaining. The source of inspiration is cloudy, but what is clear is the intentional nod to The Who’s “Won’t Get Fooled Again” synthesizer break in the middle of the song, which may be an easter egg message of its own. Drumming pal Gregg Bissonette shines on this section, as well as the entire record with some clever percussive extras and a rock solid pocket that cements Luke’s legacy of playing with monster musicians.

The slinky second track, “Serpent Soul,” is a rompy, venom-filled finger pointing at Lukather’s legal adversary.  With lyrics like, “Sometimes I wonder where it all went wrong, Can’t find a reason so I wrote this song, I can’t do this anymore, Won’t take the fall, I won’t be your Judas goat, You think I’m a snake in the grass, But not so fast, Check yourself for a serpent soul,” it’s pretty clear what Lukather is saying to his legal adversary. The song features an appearance of David Paich on piano, reminiscent of his sound on “Hold the Line” from their 1978 debut and many other Toto classics. With Paich and Lukather playing and Joseph Williams on background vocals, this track could easily make the case that the sound of Toto will yet have more lives to live in the future.

This is a Lukather record, however, and that means that the guitar takes a greater share of presence than it would on a Toto record. This is surely the case in the first of three covers on this recording, a smoldering rendition of Traffic’s “Low Spark of High Heeled Boys.” The band stretches out here over more than 10 minutes, dabbling in spacy and jazzy territory, while returning to the familiar Paich piano in the chorus. Lukather proffers fuzzy jab lines in the chorus, contrasted by more subtle and sly playing adorning the rest of the track, with a musical nod to Santana’s “Black Magic Woman” in a spot. Lukather says that this record was recorded quickly (a song a day), often in one take, with the goal of achieving a live sound in the style of 70’s classic records. This track certainly achieves that vibe, and somewhat resembles “Candyman” more than any other record from his solo discography. His lead playing near the end of the track is tasteful and commanding, which is generally a trademark of Luke’s playing. It’s also worth noting that he still sings great, as well. 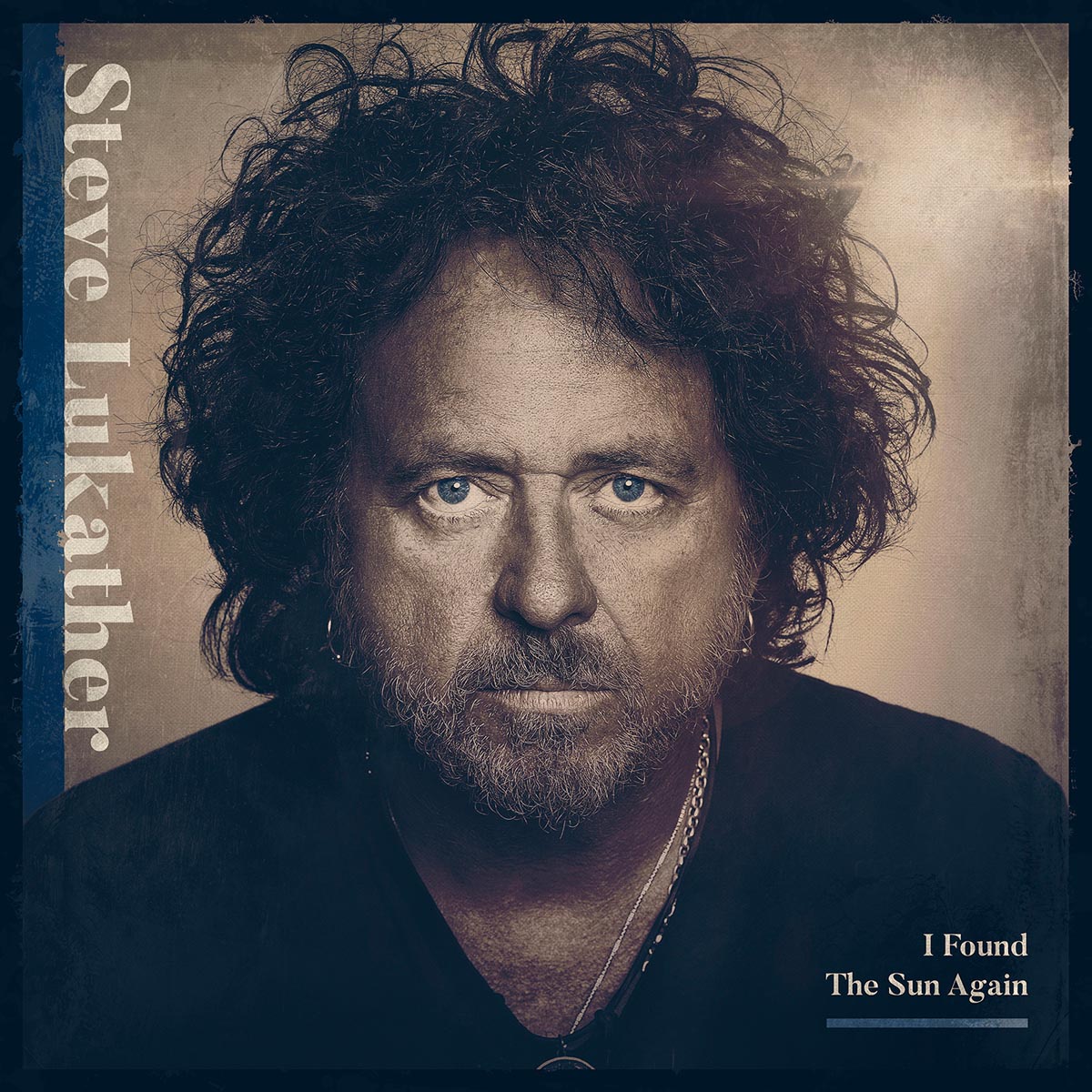 This is a very diverse record, with a lot of musical ground being covered. This fact is even more driven home through the fourth track, “Journey Through,” a fusion-y instrumental track featuring soaring, melodic guitar work in a chill vibe that is a pretty good summary of Luke’s voice on guitar, both from a note choice and tone standpoint.

The next track has a strong Joe Walsh vibe to it, which makes sense as it turns out that “Welcome to the Club” is in fact a Joe Walsh tune Luke and Co. have decided to cover. While the playing is strong on the track, this tune falls a little flat for this listener, which is probably more a statement of one’s musical interests than Luke’s capabilities. It drags a bit in spots but showcases some bold playing and singing by Luke.

The title track, “I Found the Sun Again” rolls into more new musical territory, being a very laid back ode to his new girlfriend, and the new hope he’s feeling with her now in his life. This song floats for over 6:00 minutes and is the definite chill spot of the record. Unlike anything else on the record, it gains points for its grateful tone, while possibly running a bit longer than ideal.

Throwing the car into another gear, “Run to Me” is another feel-good hopeful track that features Luke’s pal and bandmate Ringo Starr. Given that the Beatles are his proclaimed reason for playing guitar, it’s kind of surreal that Lukather has done session work for Paul McCartney and George Harrison, and more recently tours with Ringo’s All Star Band. This retro-sounding love song is a massive contrast to the bitter opening sentiments of the record, and moves the listener to a lighter, happier place. Love it or hate it, Ringo sounds like Ringo with his cloppy fills and Joseph Williams contributes some tasty layered harmonies and background vocals to make this a breezy track that’s short and sweet.

Wrapping up the record is the third cover, Robin Trower’s “Bridge of Sighs,” which opens with one of Luke’s best sounding tones packed with jangly shades of Jimi Hendrix and David Gilmour. This track is unabashedly a guitar track built for jamming and David Paich delivers a great organ solo that gives way to a sublime tube-screaming guitar solo that once again puts Luke’s restraint and note choice on display as much as his well-developed chops. This one would be killer live, and it’s killer on the record, as well.

So, despite the apparent death of any iteration of Toto with Porcaro influence, one can almost hear Lukather screaming, “I’m not dead yet” on this record. He reemerges from the pandemic and legal blues to put forth a strong statement of a player who still has things to say and do. Despite the album length, an additional original track or two would have been a welcome addition.

Musicians will appreciate this record, and at least some Toto fans will, though the diversity might leave them feeling a little disjointed. The plan is for him to tour in a new version of Toto that features Joseph Williams and a talented new cast of seasoned players. It will look and feel different without at least one Porcaro on the stage, but it’s a very good chance it will still be very worth catching in your town…if we ever get back to seeing live music in a theater again.

“I Found The Sun Again” track-listing

Emerging out of a tumultuous band ending for classic rock stalwarts Toto, guitar legend Steve Lukather shows that despite many years in business, he still has enough piss, vinegar and chops in him to produce a looser, live sounding record that is varied, identifiable and fun.