Love them or hate them, Steel Panther are hard to miss. Formed as Metal Shop (soon changed into Metal Skool), these Californians seem determined to ensure their time capsule is broken after taking them to the Sunset Strip in 1984. With four albums under their animal print belts and sold out tours across the globe, they push forward with the sex, drugs and metal lifestyle on album number five, Heavy Metal Rules, set for release on September 27th.

It’s very easy to dismiss Steel Panther as a joke band, and I honestly have been guilty of doing so myself, for a number of years. And like I say on many of my reviews, the beauty of writing about music is that you’re exposed to bands you wouldn’t necessarily pursue on your own. In the case of Steel Panther, I’m glad I was asked to listen to them. Singer Michael Starr, guitarist Satchel, bassist Lexxi Foxx and drummer Stix Zadinia have long surpassed the tag of being simple jokesters, and surely can deliver musically and lyrically.

Speaking of the lyrics first: if you’re part of generation snowflake and/or are easily offended by non-PC jokes, avoid this band like the plague. Their songs gravitate around three subjects only: metal, how women are bitches, and how in spite of that, they still want to sleep with them. Maybe their approach to the lyrics is not as clever as that of David Lee Roth or Vince Neil. In fact, compared to Steel Panther, those glam veterans may seem as deep and thoughtful as Bob Dylan or Sting. But once you get past that – or rather, once you EMBRACE that and join the fun, there’s no way back. After listening to Heavy Metal Rules, I made a point of checking out their previous albums, and man, am I glad I did it!

With the scenery set and all disclaimers in place, let’s talk about the new album. It kicks off with the most iconic phrases of “Zebraman”, an interviewee of the “Heavy Metal Parking Lot” documentary. He goes: “Heavy metal rules, all that punk shit sucks. It doesn’t belong in this world, it belongs on fucking Mars. And Madonna can go to hell as far as I’m concerned, she’s a dick. Heavy metal definitely rules. Twisted Sister, Judas Priest, Dokken, Ozzy, Scorpions…they all rule!”. The 17 minute document is an image of a simpler time, when apparently punk and new wave were the enemy. More than 30 years later, with people seemingly too afraid or too concerned to have fun, Steel Panther make a point of being just as direct and simple. They are forever on a mission to bring ballsy metal back onto the fold. 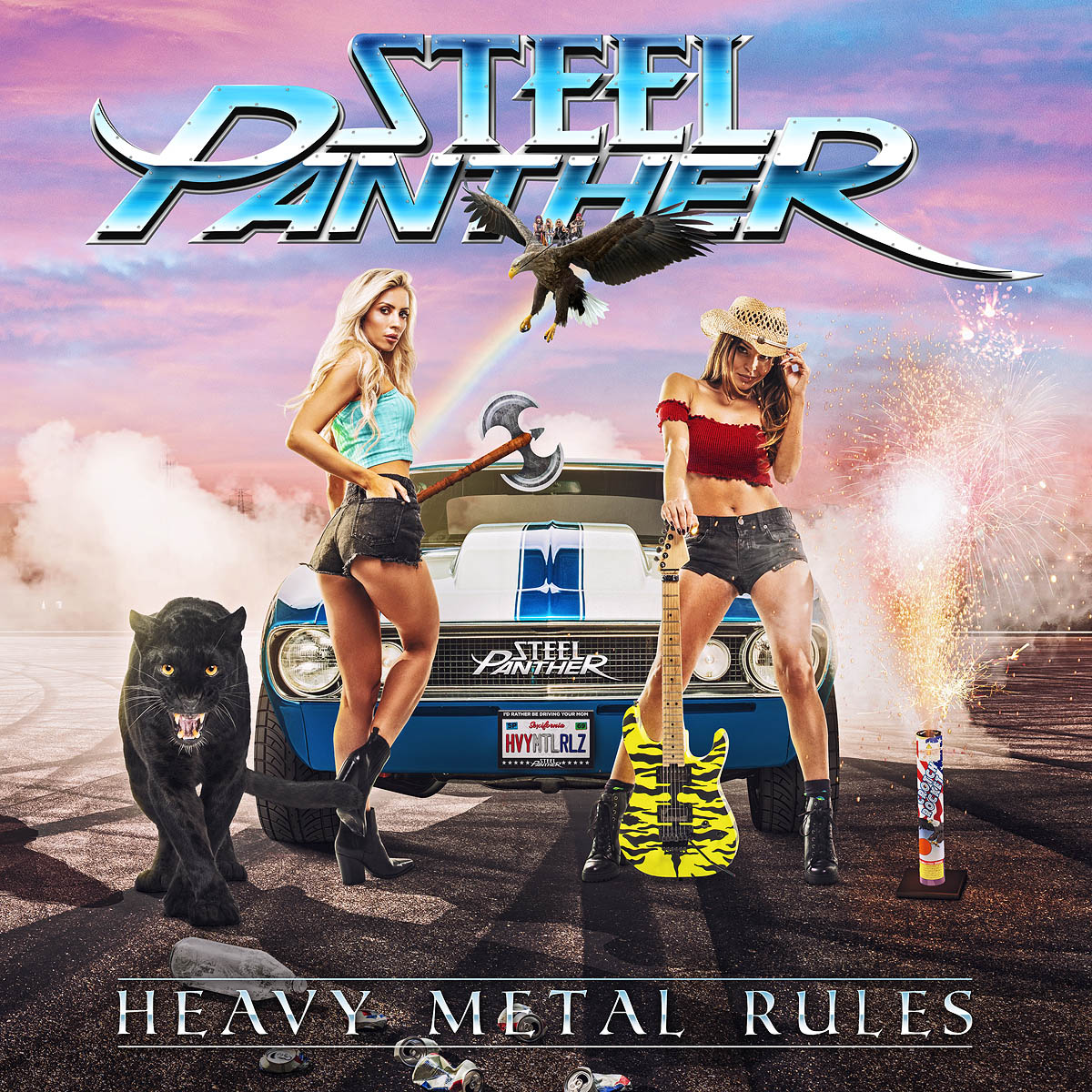 “Zebraman” segues onto “All I Wanna Do Is Fuck (Myself Tonight)”, which has already been revealed to the fans on a video that works as a metal spoof of the movie “Hangover”. Cue offensive lyrics, massive chorus and guitar solos at the speed of light. The big fat riff of “Let’s Get High Tonight” announces their intent, which is confirmed by the lyrics: “mom and dad are out of town/call the whores, it’s going down/let’s all fuck until the dawn”. Two songs in, and evidences of how great they sound are in no short supply. Michael Starr’s voice has the silkiness of David Coverdale’s, and he’s also able to do that throat whistle, which David Lee Roth seems to have lost the ability to do more than twenty years ago.

Acoustic guitar builds towards a lovelorn lamentation on “Always Gonna Be a Ho”, a slow paced number which explodes into a massive chorus. Just like everything else in their repertoire, this one is custom made to be sung live. They switch the gear on follower “I’m Not Your Bitch”, with riffs that is borderline thrash metal. The contribution of producer Jay Ruston (Anthrax, Stone Sour) to the sound of this album cannot be overlooked: Satchel’s fat guitar tones and Michael’s wails are on the forefront, but the rhythm session is also allowed to shine.

The band finds time to rail against injustices of “some dick going 20 miles in the fast lane” or “having to wait at Starbucks” on “Fuck Everybody”, which is as close to a protest song as these guys will ever get. The moody title track kicks in, with the no holds barred chorus of “Heavy metal rules, and everybody else can suck my dick”. Really no complexity here, but I’ll let the band explain: in the words of Michael Starr, “We really do love heavy metal and performing,” and “We’re going to fucking conquer the world the Steel Panther way. Heavy metal is coming back. Pretty soon, everyone’s going to have long hair and wear spandex.” Lexxi expands on the subject: “We’re doing our part to bring heavy metal to the messes. Do some occasional drugs to keep yourself okay on the inside, fuck as much as possible, and oh yeah, Heavy Metal Rules.”

If you’re a feminist and made it this far, the one-two punch of “Sneaky Little Bitch” and “Gods of Pussy” will be the last straw for you. “Making them squeal, making them feel like leaving their husband”, Steel Panther thrust on, brought forward by Satchel’s amazing prowess on guitar. Sometimes resembling an updated Brad Gillis, other times using all-too-familiar Eddie Van Halen tricks, his chops are comparable to any of their more respected contemporaries like Doug Aldrich, Andy Timmons or Joel Hoekstra. I can’t repeat myself enough: underneath that joke façade, here’s a band with great skills and muscular tunes.

Heavy Metal Rules is closed by a song far from the high octane rifferama, with “I Ain’t Buying What You’re Selling” bringing acoustic guitar and keyboards. This is another great addition to their seemingly endless collection of party anthems, which does not provide the answer the the lingering question since their first album: will they stick to their shtick, or will they eventually move on to being a more “serious” type of band? At least for the time being, they’re thrusting forward with the same approach and lifestyle. And as a new fan, my one request is: please don’t change!

Steel Panther, the spokesmen of the sex, drugs and metal lifestyle are back with another great collection of party anthems. Pushing the envelope, one offended snowflake at a time, “Heavy Metal Rules” once again showcases the band’s no-holds-barred and no apologies approach, with guitars and vocals taking the lead in telling tales of hookers, groupies, drugs and alcohol. Whether you once indulged in those habits or not, it’s hard not to be drawn to and infected by their Peter Pan-like devotion to chemicals, boobs and fat chords