SOULDRINKER, is German-Austrian band, active already since 2012 and formed around singer Iris Boanta and guitarist Markus Pohl (Mystic Prophecy). They have released a couple of EPs earlier in the decade and took until now to release their first full length effort on El Puerto Records (home of bands like Witchbound), entitled “War is Coming”. Rounding out the quartet are Chris Rodens (bass) and Steffen Theurer (drums). The album comes after close to a hundred European shows with the likes of Powerwolf, Delain, Brainstorm, Serenity, and Morbid Angel, and it was recorded and mixed by Tom Müller at the Flatliner Studios/Ingolstadt and mastered by Eike Freese at Chamäleon-Studios/Hamburg. 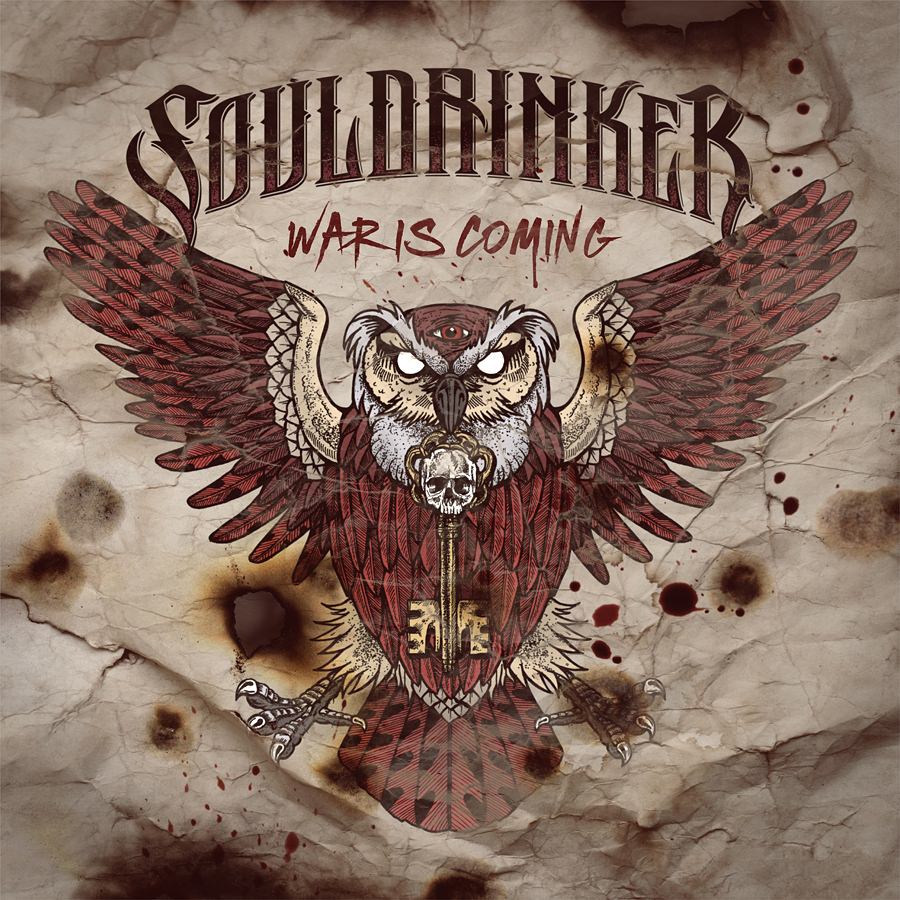 The opening salvo “Let the King Bleed” sets the album tone and gives the listener a great initial pump and a good inkling of what is next. Starting with an eerie spoken intro, it quickly develops into a muscular, galloping riff jam-packed with groove, melodic choruses and double bass drumming, propelled by the incredible powerful voice of Ms. Boanta, which covers the whole metal spectrum, moving easily from crushing ear-bleeding lyrics to pleasant melodic passages. Fans of Chastain, Leather, and Sister Sin should enjoy her brilliant performance and welcome her as a great addition to the world of female vocalists, she certainly knows how to put the songs in the right light with her rocky, and at times coarse voice, full of facets and sitting comfortably when hitting high registers. Guitarist Markus Pohl is at the center of it all, coming up with an endless stream of outstanding heavy riffs and melodic solos. With his partly tuned guitar his playing style combines the Zakk Wylde’s groove with the fast-paced soloing of Gus G: a killer recipe. The rhythm section of Chris Rodens and Steffen Theurer keep things direct and bombastic at all times, adding the power-charger romp and the right punch right where the music needs it.

Second cut is the album namesake “Souldrinker”, bringing a dashing and crushing riff to the fore, one that reminds me the energetic vibe of Pantera’s “Cowboys from Hell” skillfully mixed with anthemic melodic hooks alas Judas Priest’s “Painkiller”. A real headbanger, it grabs the listener right where it hurts and never let go of him over the entire 5 minutes, sporting all the right ingredients to become a fan-favorite when played on tour. “Promised Land” ups the groove a couple of notches with the initial riff, to later mellow-out with a ballad-sounding and finely-measured chorus that exudes melody, combined with the omnipresent crunching guitars. The oddly-titled “To the Tick” comes to life like a hair-metal ballad poising an emotional and goosebumps-driven piano into, but quickly explodes into a monstrously heavy staccato riff paired with a daunting and truly perfectly placed chorus that brings the song to another level. Track after track the album keeps the mood, balancing intensity, swagger and groove with pushing forward vocals, big choruses that will undoubtedly be crowd pleasers, and soaring yet restrained guitar leads.

I’m not even close to be a power-metal fan, yet this SOULDRINKER album has caught my attention. The band’s ability to navigate over-crowded waters and emerge unscathed with a collection of compact and memorable songs that keep you engaged for the whole duration of the record (and eventually wanting for more) is noteworthy. Dramatic guitars, sharp riffs, and superb vocal dexterity are SOULDRINKER’s stocks in trade, and they prove to successfully combine them in the right dosage, one that makes them to stand-out from the throng. A solid debut effort which could easily propel them into the power-metal surprise band of 2017. Be careful, ’cause “War is Coming “and will make your head bang!