In twenty years, adult contemporary artist Soleil Moon has only had two album releases, so it is a momentous occasion for the band when a new album is finished. In this case, that album is entitled Warrior, and this third album marks a moment of new exploration for the band.

Soleil Moon (no relation to Punky) made a substantial mark on the contemporary adult pop scene with their debut in 2000, a year when most radio stations of that format were spinning Michael Bolton, Celine Dion, George Michael, and Sheryl Crow. Although the band’s sound, driven by founder-singer Larry King (no relation to CNN for the full hour, or any hour) was certainly in keeping with the scene of Aaron Neville and solo Phil Collins, they crafted a sound with a unique fusion of blues, jazz, and R&B influences, perhaps comparable to the way Hall and Oates found a unique soul-pop sound in the 80s. Even when Chi-Town native Larry King has a full plate with professional voice and composition work in commercial TV and radio, the Soleil Moon project remains front and center among his list of loves, and the new album Warrior reflects this, along with the time and care put into each album. The album is marketed as melodic rock, and while it is certainly both of those things, the band does not stray far from its adult pop radio roots.

In fairness, the album struts out with a hard-box of smokes rolled up in its white tee-shirt sleeve with the introductory song, “72 Camaro,” an homage to a man’s second-gen F-body and its snarling beast of a 396 big block V8. OK, the song does not go into that much detail, but we can tell from the way it’s talked about that it’s a sweet ride, Holley carb or no. The song is an interesting blend of acoustic and electric guitars, and keyboards to create a texture which, while a far cry from being metal, is much more guitar-driven than the band’s previous material. The verses have a certain Springsteen/Joel sort of “remember the good old days” lyrical quality, but the chorus still feels good in a happy major key sort of way. All the guitar lead melodies are well-executed with good tone, and we even get some quarter mile burnout revs in the middle of the song. Just when we think we have heard every rhyme in the lyricist’s handbook, we get to hear shifter rhymed with lifter. Well-played, sirs.

The second track, “Here for You,” is a bit of a bittersweet ballad one might find on a Survivor album. It leads the listener to a poignant paradigm of a woman who seems to be a flighty drama case, getting in trouble and crashing with everyone but the narrator, the one sorry soul who for some reason loves her unconditionally. It’s a bit “Pretty in Pink.” Perhaps we all empathize with Duckie sometimes. All the same, the composition is tight, complete with even better guitar leads. 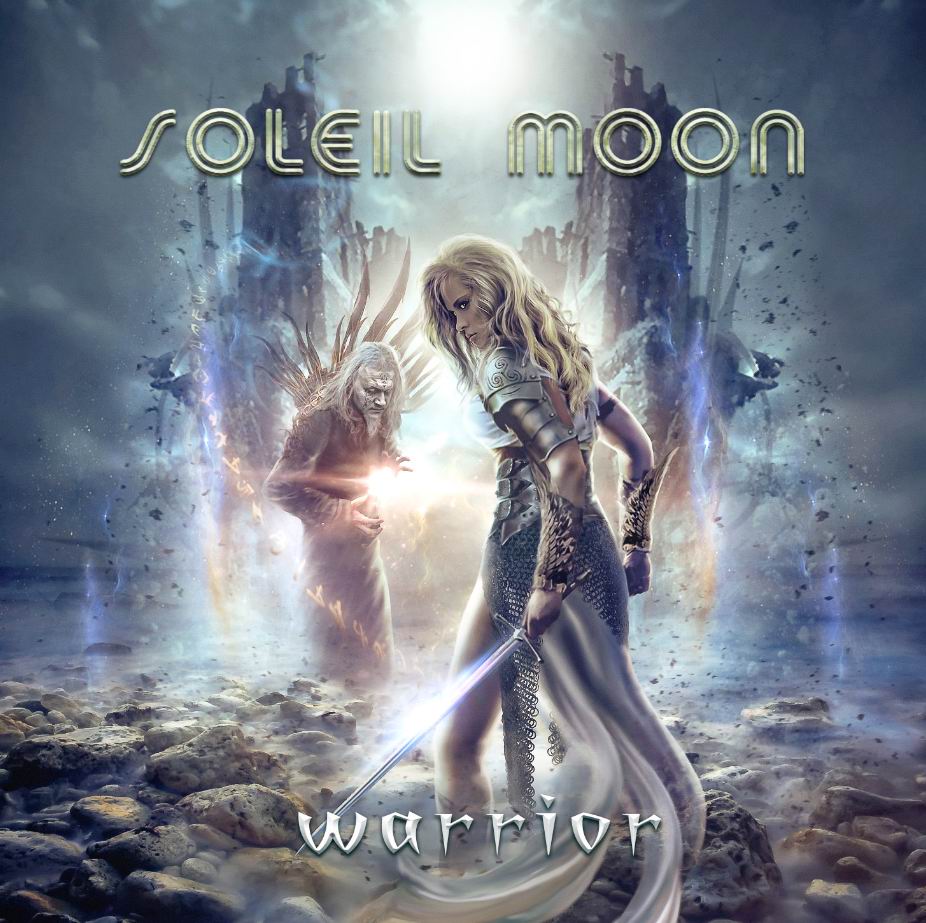 The third track, “You and I” (no relation to “You and Me” from their debut album), may actually be the most compositionally interesting track on the album. It’s like J-pop disco funk. Right down to the beats, the two-part vocal interplays, the ambient synth bits, the wah pedal single-coil guitar, and the contemporary drum machine fills. At first, it is hard to know what to make of this little tune, but after about the third listen, it makes you want to get up out of your seat and clap your hands on the 2 and the 4.

Although it would be fair say the album falls into any sort of rut from here, it does seem to find a groove and stay there through several songs close to the traditional Soleil Moon format, although with more guitar-driven rock feeling than found on previous albums. This remains unbroken until the titular track, “Warrior,” which features some of the most interesting arrangements on the album. It is unclear if the lyrics pertain to returning from actual war, or if the struggle and recovery serve as some other metaphor. Speaking of recovery, the album immediately proceeds to kick back and puff-puff with the final track, “420,” a light-hearted little exploration of recreation.

Soleil Moon’s third album, Warrior, is certainly a fish on a bicycle. Is it noteworthy? Of course. Who is it for? That is less clear. Although there is certainly some market for adult pop easy listening, as was the case for their debut album, it is unclear which radio format or audience would gravitate to songs which are too rock-driven to be adult contemporary, and yet are not quite heavy or powerful enough to rise to hard rock, or even AOR. This album did not even move the needle on the heavy-meter until we balanced it against Bryan Adams. The cover art (and album name) would make an unsuspecting attendee at Atlanta ProgPower think it was the newest thing in power metal, perhaps opening for Seventh Wonder and Sabaton. As a whole, it remains a good album, well-mixed with plenty of songwriting savvy. The challenge will be finding its audience. If you want to find out if that audience is you, check out a couple of the videos online, and if it’s music to your ears, you can pick up the whole album at the usual online retailers, or directly from the label here.

After a Tool-like hibernation period, Soleil Moon brings us a fresh offering with an even fresher new sound. Catchy, and very listenable, the band attempts to bridge the gap between adult contemporary radio pop and AOR melodic rock. Do they succeed? We’ll let you judge for yourself