Nerds of the world, travel space!

European power metal tends to fall into two categories; those who take their music seriously, and those who take their comedy-based approach to music seriously. Following a string of ultra-campy outings from the likes of Gloryhammer, Victorius and Majestica in recent years, it could be safely said that the humorous side of the coin has seen a rise in prominence of late. But while Northern Europe has been reveling in their tales of hellish space ninjas, chaos wizards and the drunken escapades of Father Time, the Italians have been having their own brand of goofy high jinks, with former Helloween tribute band vocalist Tomi Fooler’s early 2010’s brainchild Skeletoon being at the forefront of turning frowns upside down with its brand of high octane power metal and pop culture zaniness. But while past offerings that have rounded out the second half of the previous decade dealt primarily with pirates and time travel, this band’s 4th LP “Nemesis” takes more of a skyward path.

In many respects, this incarnation of Italy’s second most acclaimed Helloween offshoot has opted for musical territory similar to where Germany’s Victorius has been going of late, taking on a more prominent role for keyboard work after the mold of Stratovarius. Combined with the space case lyrics and Fooler’s high-pitched vocal gymnastics, which listen like an exaggerated hybrid of Andre Matos and Michael Kiske, and an average tempo tantamount to warp speed, it’s a highly effective evolutionary leap that further amplifies this band’s strong, melodically consonant foundation. The guest backing vocal work of Trick Or Treat’s Alessandro Conti and current Rhapsody Of Fire front-man Giacomo Voli add a layer of density to the already full arrangement that elevates the pomp factor fairly close to the character of the latter aforementioned band, while some solid guest lead guitar work by shredder Bill Hudson gives this already highly skilled fold enough virtuoso detailing to rival Dragonforce at times.

Though amped up almost to the point of absurdity in similar fashion to current trends in their happy-go-lucky stylistic cliché, this album is structured in a similar fashion to the conceptual classics of the early millennial era. Kicking off on an ambient keyboard instrumental intro called “Prelude: Falling Galaxies” that segues seamlessly into an ultra-frenzied speed metal romp with guitar harmonies blazing “Brighter Than 1000 Suns”, it becomes clear that a unified theme of adventures on the high seas of the cosmos is the order of the day for this album. The ratio of fast songs to just kinda fast songs tilts heavily towards the former, with syrupy speed anthems such as “Will You Save All”, “Wake Up The Fire” and the Edguy-inspired comedic anthem “The NerdMetal Superheroes” following the lead of the previously noted solar explosion of first full length song, chock full of flashy guitar displays, glass-shattering vocal summits and enough infectious hooks to blur the lines between metal and pop punk. 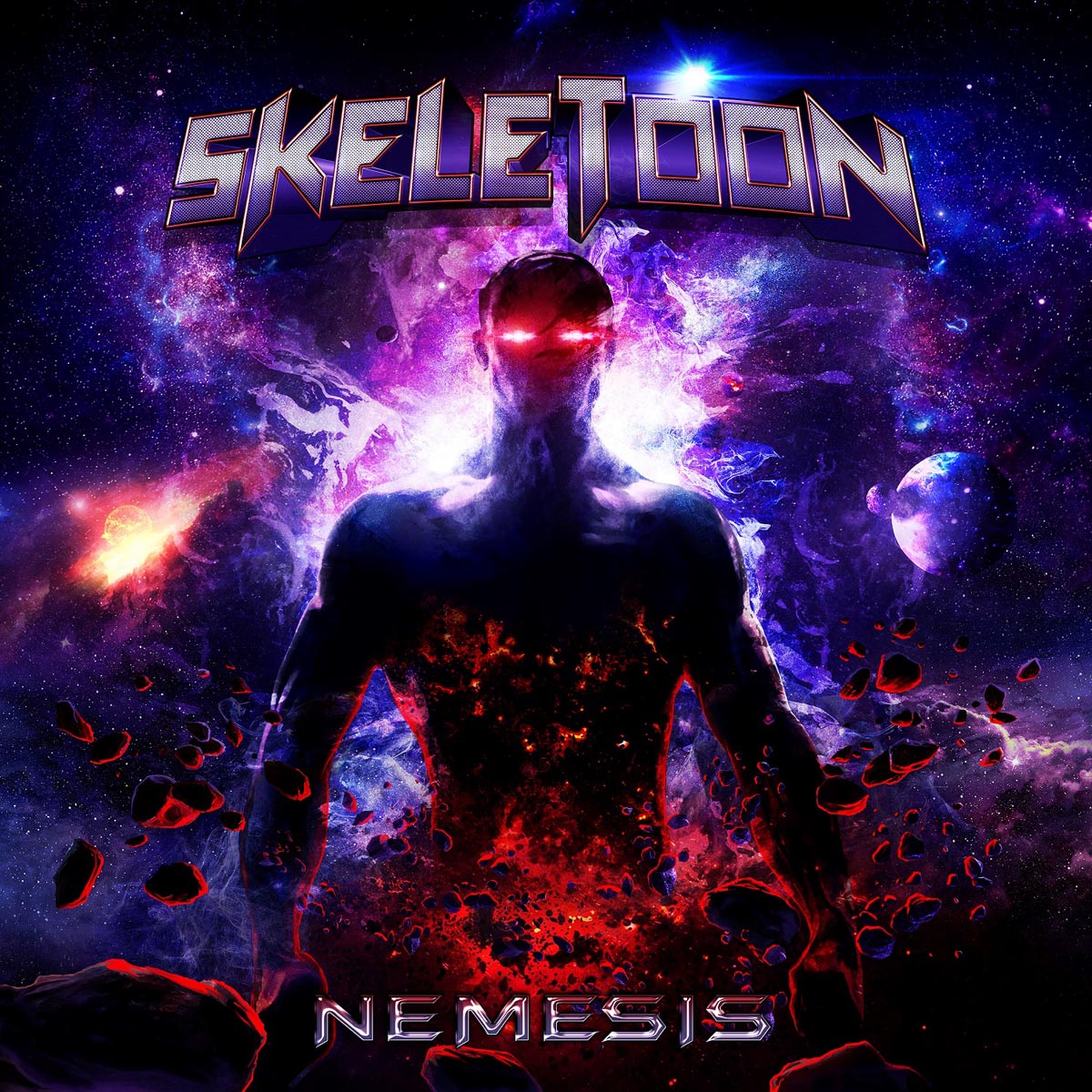 Naturally this album does not live solely by speed, and some moments for slight nuance are afforded in a context that is anything but that. The groovy and heavy-ended title anthem “Nemesis” has a melodeath flavor to it during the verses, complete with a harsher vocal line that eventually resolves in a cathartic chorus section that brings the smoothness in a mode similar to how metalcore often transitions between clean and dirty segments. The riveting mini-epic “Starseeker” has all the trappings of a Stratovarius single from its blaring synthesizer leads to its measured employment of fast and mid-tempo segments, while its longer cousin “Arcana Opera” extends this mixture to a more epic scope and heightens the dramatic factor while still channeling the same spirit of when Timo Tolkki was with his original band. The only display that proves even more impressive is this band’s rendition of Angra’s early classic “Carry On”, which is emulated perfectly from its noodling bass, guitar and keyboard lines while also taken to a spacey place more befitting the material that precedes it.

As with just about every new classic to come raging out of the broader metal world, this is an album that stands on the shoulders of some familiar giants. For their part, Tomi & company make zero secrets of which inspirational well they’ve been drawing, and they manage to stand a heck of a lot taller than others doing the same while paying their respects to the seminal offerings of the German, Brazilian and Italian scenes. If there is one over-the-top Euro-power album that graces one’s ears this year, this would be the one worthy of that one-off investment of time. It carries a bit more intrigue and complexity than the rival space camp excursion Space Ninjas From Hell, while also going a bit lighter on the buffoonery and veers a bit closer to the wittier character of late 90’s Edguy. It might not be the most original thing to come raging out of the metal world, but its sheer potency proves to be an innovation unto itself, and those craving catchy melodies played at break-neck paces would be foolish to miss out on it.

In similar fashion to their fellow Italian contemporaries Trick Or Treat, this musically compelling and lyrically campy band of jokers weave an intergalactic power metal romp that rivals the seminal offerings of Edguy and Angra.