Though enjoying one of the most diverse metal communities in the world, there is a certain character of sound that one has come to expect from Brazil, particularly insofar as their thrash metal is concerned. While there have been several noteworthy old school bands such as Overdose and Witchhammer that took pages out of the mainline Bay Area thrash playbook and presented a more accessible and melodic package, the Brazilian thrash sound has become mostly entwined with the vile, darker expressions pioneered by the likes of Sarcofago and Sepultura. In recent times the latter has taken a more groove-infused, modernist approach that has rendered it all but unrecognizable to those who long for the days of Schizophrenia and Beneath The Remains, thus the attraction to said albums by a growing number of old school thrash revivalist bands out of Sao Paulo.

One of the most auspicious developments within the last few years has been a growing number of all female extreme thrash bands cropping up in said scene, as the prolific and popular trio Nervosa has been joined by an equally formidable yet more death thrashing counterpart in Sinaya. Though both bands have been in existence since 2010, the latter was a bit later to the game in studio output and have now unleashed their debut LP Maze Of Madness a couple months after the former’s third offering hit the shelves. Be this as it may, the temptation to consider these bands as identical twins would be a mistaken one, as Sinaya has a fairly different take on the thrash metal equation that includes a heavier dose of Death and Cannibal Corpse elements, not to mention a slower and more groove-oriented approach that might lead one to mistake them for a death ‘n’ roll outfit after the Entombed mold. 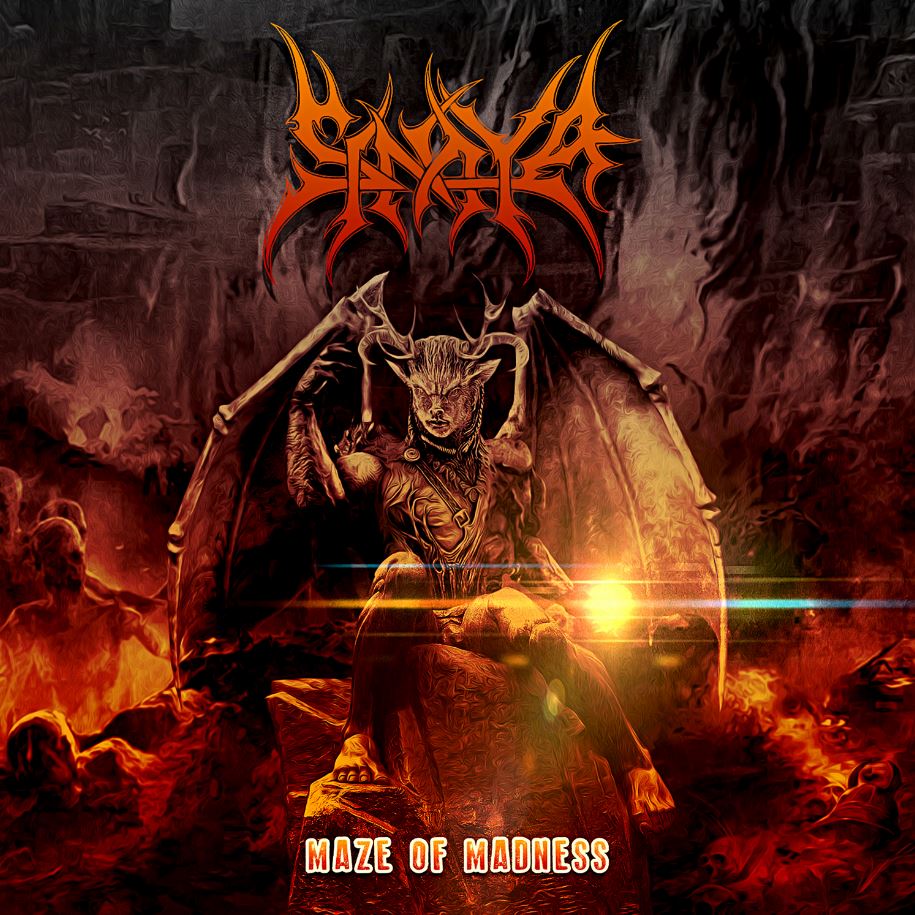 Lunging forth with all the fury of a Berzerker, yet with the slower-trudging pace of a half-decayed ghoul, this quartet places a clear emphasis on crushing necks in the most economical of fashions. Their songwriting approach is largely measured and symmetrical in fashion, often building from a more subdued stomp to an eventual raging explosion, as heard on their highlight flirtation with old school Brazilian death/thrash and Teutonic thrash “Bath Of Memories”. Alongside the somewhat more gradual development to a full blasting fit of rage that is “Deep In The Grave”, the peak of this band’s speed comes off as a bit less frenetic and flashy as that of Nervosa’s frequent forays into old school Sodom and Kreator territory, coming off more like a slightly less hulking offshoot of Jungle Rot’s middle era, but with guitar solos being a more frequent occurrence and less inclined towards Kerry King emulation while present.

The lion’s share of this album is definitely a moderately paced affair, often times straddling the line between the early death metal influences of Autopsy and Obituary with the somewhat more tuneful and less dissonant character of Six Feet Under. It’s a fairly curious balancing act, especially considering the frequent and effective employment of guitar solos, and it yields several offerings such as “Buried In Terror”, “Life Against Fate” and “Crowd In Panic” that are both elaborate yet also quite accessible. Mylena Monaco’s deep grunts and barks manage to fall just a tad deeper than such iconic female grunter Angela Gossow, and often seem to near mimic the characteristic guttural character of Chuck Schuldiner circa 1991, yet at the end of the day it proves to be Renata Petrelli’s riff work that really gives this album personality, though one would be remiss to ignore an obviously competent rhythm section.

From an objective perspective, the raw talent and ability of this band is equal to that of Nervosa, and it wouldn’t be much of a stretch to see both bands sharing most of their respective audiences. Nevertheless, the author of this review finds himself drawn ever so more strongly to the more frenzied, speed-infused character of Nervosa due to personal preference for said approach given its nostalgia factor with the late 80s Teutonic thrash scene in a present day Brazilian package. They are by no means the same band with different members, but rather two bands from the same scene representing different niches within the same overall sub-genre. If the more restrained, groove-based character of Entombed, Six Feet Under and Jungle Rot is more in line with one’s respective taste, then Sinaya is more than a worthy addition to one’s listening repertoire.

The many thrashing cadavers and skeletons to emerge from the graveyard of Brazilian extreme thrash have a new soldier, striding a tad slower than others, but wreathed in flames and compensating with a palpable ferocity