Fully quantifying the scope of the power metal explosion that took place in Europe towards the turn of the millennium is a fool’s task, as more than a couple decades later the echoes of the original continue to reverberate. Whether it be the throngs of new bands rediscovering the majestic sounds of the original late 90’s adherents to the movement, or an older outfit that didn’t quite make their mark during the original wave and has come back for another round, the stylistic niche pioneered by Helloween, Blind Guardian and a few other notable acts shows zero signs of slowing down. That being understood, there is something truly special about a band of veterans who were there in the beginning but didn’t field a final product finalizing their effort, and with an album that has finally come to light after 22 years of deferment and revision, Sacred Outcry’s debut outing “Damned For All Time” stands as one of the pinnacle triumphs in terms of perseverance and tenacity.

Taking a fair degree of inspiration from the works of famed high fantasy author Michael Moorcock, whom also happens to be the lyrical inspiration of highly unique early heavy metal pioneers Cirith Ungol, this is an album that proves massive in both sound and scope. In similar fashion to the aforementioned western U.S. 80s heavy/doom nonconformists, it’s also an opus that dispenses with a lot of the conventional practices associated with the mainline, lighter sound of the millennial Euro-power sound. The USPM stylings of Manowar and Warlord are a key fixture of their songwriting template, relying upon more melancholy and battle-torn melodic hooks rather than gallant, Neo-classical ones, alongside a tall order of haunting, acoustic guitar-driven segments. On the other hand, these songs are often graced with a sizable helping of German speed metal and American power/thrash trappings at times, pointing to a side order of Blind Guardian and Iced Earth influences.

While the substantial canvass of sound that round out the instrumental side of this album is colossal in itself, one would be remiss not to notice the stellar vocal performance out of Beast In Black front man Yannis Papadopoulos. In contrast to his soft, falsetto-steeped persona in the aforementioned band, here he delivers something more comparable to the gritty, sword-bearing hero meets 80s shrieks and snarls heard out of the likes of Ralf Scheepers and Tim “Ripper” Owens. It’s a fitting match that turns a sound that already tilts away from the happy-go-lucky side of power metal into something that is darker and more forbidding than even the more traditional metal-tinged character of Hammerfall. And even with his more ballsy approach, Yannis provides some impressive upper range gymnastics that plays off the quasi-symphonic bombast of these epic compositions perfectly, even if his air-raid wails are more reminiscent of King Diamond than they are Eric Adams. 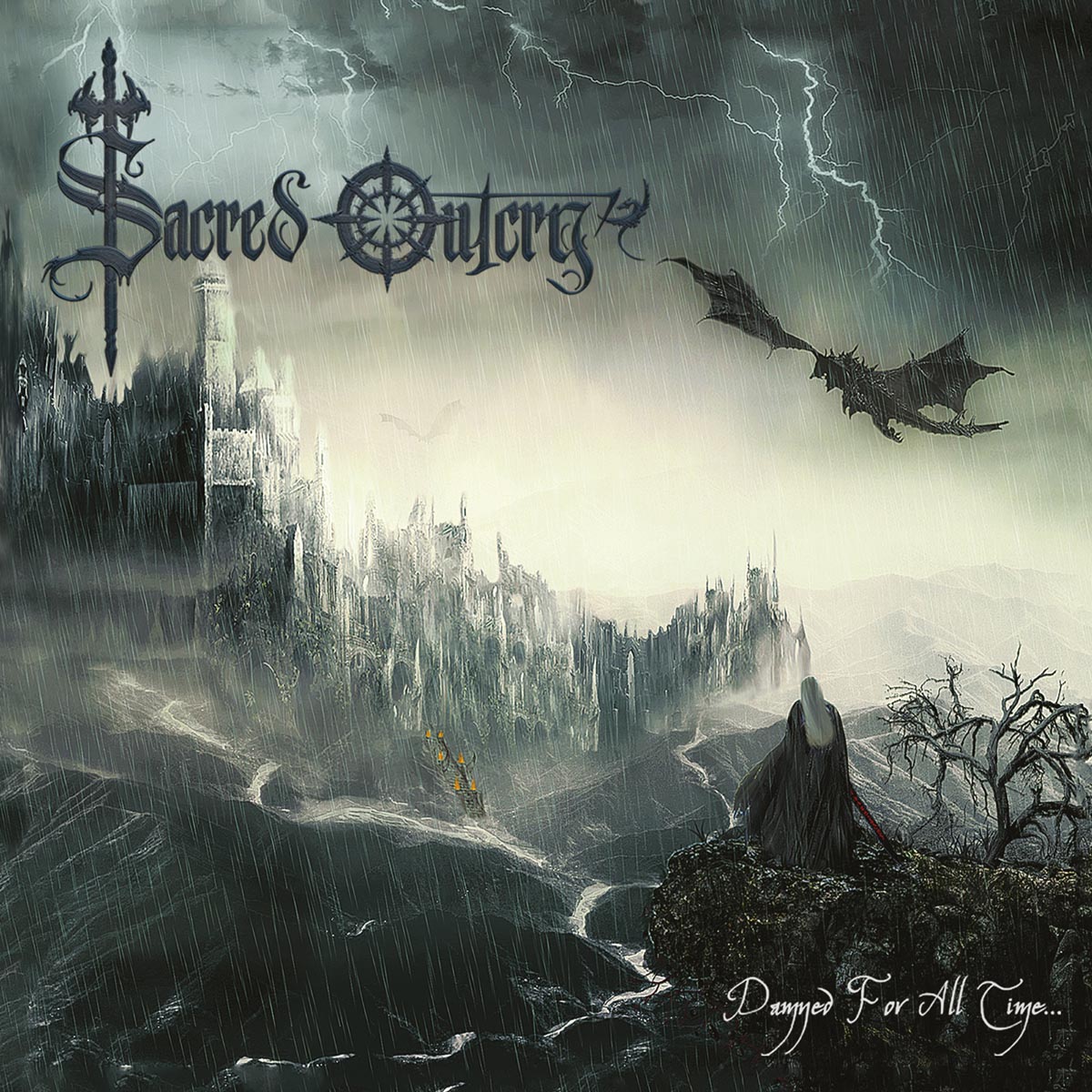 “Damned For All Time” Album Artwork

After a brief instrumental overture dubbed “Timeless”, which sets the mood with a brilliant atmospheric keyboard and acoustic guitar display, this band’s old school metal proclivities become obvious. The opening crusher “Legion Of The Fallen” shuffles through a series of driving riffs and Iron Maiden-inspired dueling guitar harmony segments while also channeling the lofty sound of Manowar’s “Sign Of The Hammer” with the modern symphonic gloss of “Gods Of War.” Though among the catchier anthems heard on here, it takes a backseat to the raging, power thrashing mayhem of “Sacred Outcry” and the speed-infused majesty that follows the dreary acoustic beginnings of “Lonely Man”. The balladry that accompanies most of these songs is at its best on the folksy yet sorrowful “Scared To Cry”, and also makes an impressive showing during the introduction of the mid-paced sing-along romp “Crystal Tears.” But the true power of this post-millennial epic metal powerhouse is the gargantuan, 14 minutes plus title song “Damned For All Time”, which marries the expansive character of “Rime Of The Ancient Mariner” with a more flashy and speed-infused metallic assault reminiscent of “The Triumph Of Steel.”

This sort of album is made to order for those who like their power metal with a meatier aggression factor while still maintaining the mythical, larger than life character that the European mode shares with its older American cousin. It wouldn’t be much of a stretch to see the fans of lighter bands out of the Italian symphonic scene finding common ground on this one with their elder and leather clad counterparts in the Helstar and Omen camp. It’s an album that was all but completed and ready for prime time back in 2003, yet was relegated to demo status due to a combination of studio setbacks and not finding the right voice to truly unlock the potential that this music held. It likewise dispels a somewhat prevalent myth that Yannis Papadopoulos’ voice is only suited for the more pop-leaning side of the power metal coin, as this is about as far from that as one could go without moving into the thrash metal paradigm. It’s a grand tale for those who love them, and a highly ambitious undertaking that rivals the best out of the power metal style this year.

“Damned For All Time” track-listing:

Even after spending over a decade in exile, some heroes refuse to be defeated, and a colossal slab of power metal revivalism with an epic focus that has been almost 20 years in the making is the prize of this Greek trio’s longstanding quest.