Just over three years since the release of the last full length release “Rapid Foray” in 2016, German pirates Running Wild have returned with the EP “Crossing the Blades,” a “foray” into the next full length release due out in 2020. If the three new songs are any indication, we may just have one of the band’s best releases since Rolf Kasparek came out of his seven year retirement in 2012.

In the 80’s and 90’s, a new Running Wild album was just about the most exciting thing for a young metalhead. It involved gleefully tearing off of the cellophane wrapping and immediate and complete investigation of the cover artwork, lyrics and liner notes, committing it all to memory while listening to the album from the first note to the last over and over. Each Running Wild album represented a month of pure listening where everything else was pushed aside until every note, every nuance was etched into the cerebellum. Life and adulting may evaporate the time, and the digital age may have destroyed any need or desire to commit facts to memory, but there is still a flash of youthful excitement – a pit in the stomach, which still exists to this day every time Rolf announces something new.

Your author may be a bit biased when it comes to the original pirate act, as the band has topped a list of favorite bands of all time for decades. Unwilling to criticize the band for the lackluster “Shadowmaker” in 2012, it was simply a vehicle to retool Rolf, who had been knee deep in writing mode for his hard rock leaning Giant X project since 2009. The songs that would appear on “Shadowmaker” were birthed in that writing process and deemed too heavy for Giant X, which naturally led to the rebirth of RW. 2013’s “Resilient” and 2016’s “Rapid Foray” where consistent strides back to the Running Wild I knew and loved. So many long time fans had jumped ship, claiming Rolf was just a shell of his former self. Well, this writer wholeheartedly disagrees.

Enter “Crossing the Blades,” a release featuring three new tracks and a cover. Doesn’t sound like much, but when you quickly realize that one of those song is one of the best songs released by Rolf since his comeback, hope quickly escalates. The title track opener is the prototypical Running Wild tune found on nearly every single album – a five minute mid-paced, but solid, rocker – keeping true to Rolf‘s love of history, here recalling the musketeers of 1630’s France. The interesting nature of this song, a version that will remain unique to this release, is that it is based on bass riff rather than one of Rolf‘s signature guitar riffs.  A new re-recorded version will appear on the new full length (expected in the summer of 2020). 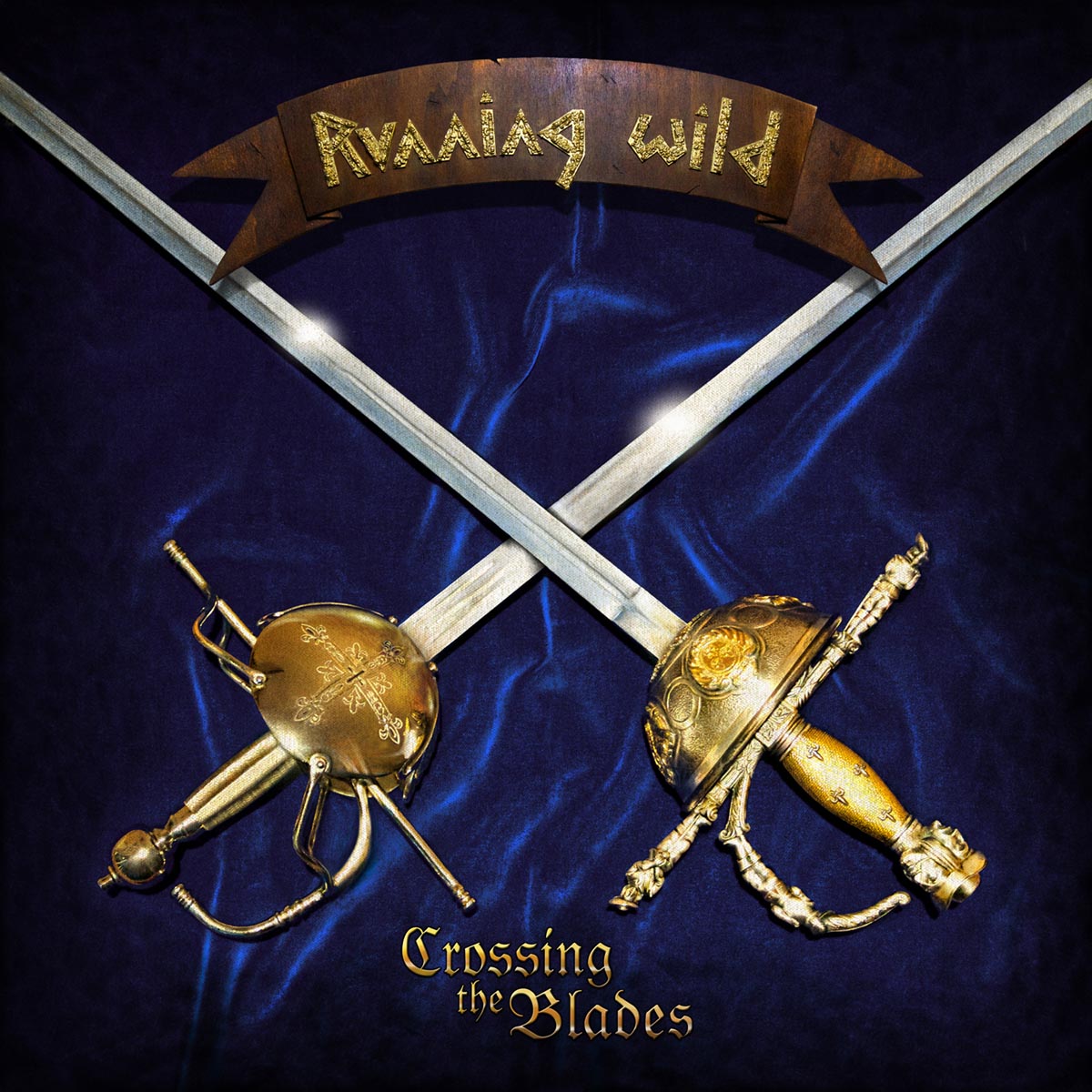 “Stargazed” was premiered live at 2018’s Wacken Open Air. This song features a riff that brings back memories of the guitar crunch and tone of “Raw Ride” (from “Under Jolly Roger“) and can easily fall in between the songs of that 1987 classic release. Yeah, it is that good – likely the best Running Wild has released by Rolf in the band’s rebirth era. This is a song that embodies everything great about the band.

Knowing how big a fan Rolf is of Kiss, its nice to see a cover of “Strutter,” if only because of the rarity of Running Wild in recording covers. In fact, its only the third cover in the band’s history – the other two were Thin Lizzy‘s “Genocide” and The Beatles‘ “Revolution.” One of the most endearing features about Running Wild is the long history of inclusion of rare, unreleased or re-recorded original tracks on singles, EPs and special editions, making it absolutely essential for a fan to seek them out. Add the rarity of Running Wild even recording covers and it makes hearing typically mundane covers so special.  Rolf‘s rendition of “Strutter” is both true to the original and the style of Running Wild. You can clearly hear just how much influence Kiss has has in many of Rolf‘s songs.

The album’s closer – “Ride on the Wild Side” is the fun rockin’ track, lyrically reminiscent to Saxon‘s “Denim & Leather.” Always a staple on a Running Wild album, those hard driving rock track keeps Rolf rooted in those influential acts like Kiss, Judas Priest and Thin Lizzy. This joins a vast array of other rebellious tunes like: “Raise Your Fist,” “Raging Fire,” “Bad to the Bone,” “Rolling Wheels,” “Fistful of Dynamite,” “Freewind Rider,” “Rebel at Heart,” “Kiss of Death,” “Into the Fire,” “Crossfire,” “Born Bad, Dying Worse,” “I Am Who I Am,” “Adventure Highway” and “Stick to Your Guns.”

But hold on….STOP the presses!!! We have a drummer name – ex-Hermann Frank, current Victory smasher Michael Wolpers! However, after the first pass through “Crossing the Blades,” it suspiciously sounds as if the infamous Angelo Sasso has been resurrected! Joking aside, one can only imagine just how brilliant a Running Wild release would sound if Jacob Hansen, Simone Mularoni or Lasse Lammert had a crack at it.

EPs can be a cruel bitch – giving you a just a little taste, laced with hope, before sending you to the back of the line to wait another 6-7 months. However, with Running Wild an EP historically represents something special, featuring tunes you won’t find anywhere else. In the span of just four songs, Rolf manages to show the listener every side of Running Wild, leaving fans wanting more for that upcoming new full length. Is it summer yet?

Running Wild returns with a taster EP in lead up to a new record in the near future. Featuring just three new tracks and a Kiss cover, "Crossing the Blades" still manages to display all sides of the legendary pirate metal act. One of those new tracks is arguably one of the best Rock N' Rolf has written since bringing the band back from retirement back in 2012. It's all just a tease... and I want more! Mission accomplished!