It’s hard to know where to start when reviewing an album that represents the first new release from an artist in almost 25 years. Not that Roger Waters has been inactive for the period – far from it. In fact since his return to the live arena in 2000 he has been extremely active for a long time, with a succession of tours covering mostly aspects of the Pink Floyd back catalogue, also touching upon areas of his solo work and sometimes introducing new songs. That touring has mostly been with a similar cast of musicians, culminating in the mind blowing “Roger Waters’ The Wall” shows of the last four years. Towards the end of that run of shows Roger implied that this was probably the end of his touring on that scale and also had mentioned a new album project. But this isn’t it. The “when will they stop killing the children?” concept hasn’t appeared, although he says it hasn’t gone away for good. Instead we are presented with this album, of new material – none of the songs that Roger has featured live over the last few years appear – with a new lineup of musicians, mostly, and a new producer.

So what is it like? Has it been worth the wait? Well it depends what you expect and that’s the thing that’s been a dilemma for me on initial listening – what should I expect from an artist who hasn’t had a major release for 25 years? It’s been obvious to those who follow Roger’s career, and in particular the live shows he played in 2016, that the current world situation has exercised him significantly and in particular Americans’ choice of president. This is not an album about Mr. Trump, although he does feature in both a lyrical references and speaks within the aural backdrop, but it’s very much Roger’s reflection on how he sees the world today. Just when you think you’re in for a full album of political raging, Roger throws a curveball and the album ends in a way that I didn’t expect. 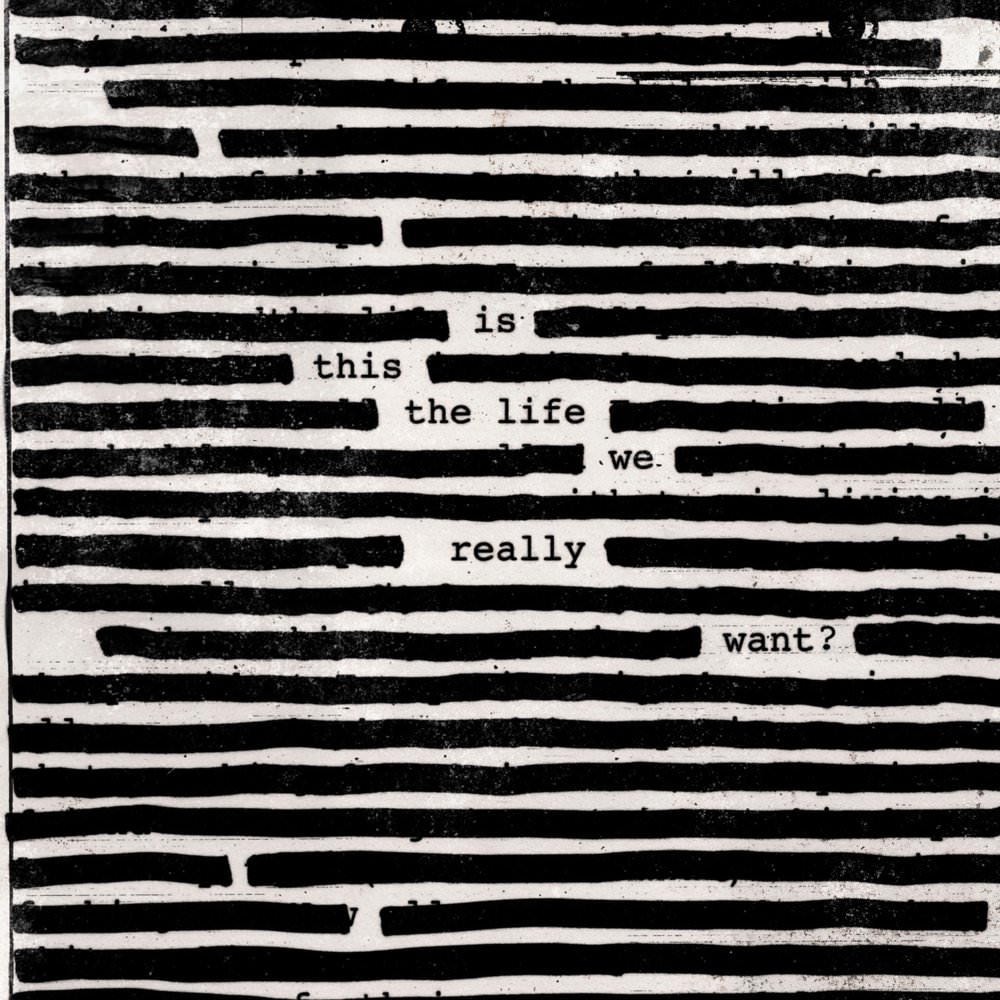 “Is This The Life We Really Want?” Album Cover

In reviewing this album it would be very easy for me to list out the songs and in particular, the parts from the Pink Floyd back catalogue that they pay homage to/ resemble. There is absolutely no doubt that Waters has set out to incorporate some of those familiar sounds and textures from his work with Pink Floyd. I’m not sure what is his rationale for this, given that this is something new. It’s clear that he is not striving to create a “pretty fair forgery” as he called David Gilmour’s first Floyd effort following his departure. Perhaps it’s the influence of collaborators Nigel Goodrich and Jonathan Wilson. Whatever the reason,echoes (no pun intended) of the 1970s Floyd experimentation, the stripped back sounds of the final cut, synth tones of the Dark Side/Wish You Were Here era, the echoing final word of the sentences from Animals (“stone… stone… etc) or the aural soundscapes of The Wall all feature here in different places I have to admit that for me this was initially a barrier – it is prevented me from hearing the songs underneath and instead I was going “Oh that sounds like…”. I’m sure that was the part of the idea and a choice was made to work on a familiar “can as”. It was a distraction at least the start but after several listens it’s just part of the song. and that’s not a bad thing.

This is very much an album of two halves. The first part feels like it is Roger’s treatise on the world today – and he’s asking lots of questions. What is God doing? What are our politicians doing? What am I doing and could I do it better than all of them? Roger concludes that he could “I’ve done a better job” but yet I’m not quite sure what he would have done. Colourful language abounds, perhaps unnecessarily, but I assume this is his way of driving home the message. It’s probably not a surprise given his history to say that this is a really good album to listen to on headphones – there is so much going on from the opening heartbeats and detuned radios and TVs – at one point I actually got up to open the door which I thought was being knocked, but it turned out it was just the sound effects.

Following the short instrumental, we have the album opener – “Deja Vu” – it doesn’t have the power of the bombast of the kickoff tracks from some of Roger’s albums, mind you. I’m guessing that on this album Roger has not felt constrained to work with the normal verse/chorus/ bridge /guitar solo/chorus etc, which a lot of Floyd’s famous songs follow. So on this song, the last section feels like a separate chunk, not directly linked to what went before. I haven’t noticed a guitar on this album – again perhaps that’s a deliberate decision, perhaps not. Maybe the unavoidable comparisons to his former right-hand man have promoted this – maybe the music just doesn’t need it.

I’ve already referred to the soundscape and backgrounds that feature on the album. One thing I haven’t mentioned so far is the actual instrumentation. It’s actually fairly stripped back – drums, bass, acoustic guitar, piano and 1970s sounding synths. There don’t appear to be a huge amount of overdubs on this album – it’s quite an organic sound and it’s all the better for it. It definitely makes it stand out from a lot of his previous work. The vulnerability and, dare I say, limitations of Rogers voice joined with basic piano or guitar really enable his message to hit home. By the time we get to “Picture that”, the science is overwhelming and overpowering as his anger rises and the music follows suit. It’s quite a standout track on the album for a number of reasons – we are very much in “Animals” territory here, only this time the raving (and possibly drooling?) are coming from Roger. But the anger is left hanging at the song’s end and instead the next track – Broken Bones – is him attempting to reason how did we end up where we are? His conclusion is that, left in the aftermath of the Second World War, we chose consumerism and greed as our way of life, and these what brought us to where we are now. These are familiar themes he has explored before but are very much in a contemporary context. The album carries on touching on these areas, at times raging, at times trying to reconcile, at times it’s just music and sound effects from past times.

So it comes as a bit of a surprise that the ending is something very different – a three song suite which is simply about love. It seems that he has vented his anger and Roger is focusing on what’s important to him, and where he has found, perhaps, his peace and his resolution. Is this the message of the album? Greed is the problem, love is the answer? Not sure but it sounds like a good way to end.

I’ve already said this is not an album I loved straight away. But it’s an album I kept coming back to. I wanted to listen to it again – and not because I liked what I heard, but because it felt like it was worth exploring. It’s not particularly clear to me what Roger thinks the solution is to all the things he mentions earlier on. He doesn’t come with answers and the closest he gets is to say: this is what works for me.

Is this the album I really wanted? I’m not sure, But it’s definitely one that’s worth listening to.

“Is This The Life We Really Want? ” track-listing: