Rumbling Box, a brand new 5-disc box set by Rikard Sjöblom’s Gungfly, is scheduled to release March 23, 2018, complete with early catalog works, bonus tracks and an entire previously unreleased album.  Rikard Sjöblom is best known as the frontman of the Swedish progressive rock band Beardfish, who gained massive attention and a cult-like following within the prog scene over the last 15 years.

Many fans were introduced to Beardfish through their tours with high-profile acts like Dream Theater, The Neal Morse Band, and Spock’s Beard.  Fewer people, however, are familiar with the handful of Sjöblom’s solo works, which were released over the last 12 years under the Gungfly moniker or simply as Rikard Sjöblom.  Following the 2017 release of Gungfly‘s On Her Journey to the Sun many fans — me included — discovered that Sjöblom’s genius extends well beyond Beardfish and are looking to get their hands on his prior solo works.  Rumbling Box is the perfect solution. 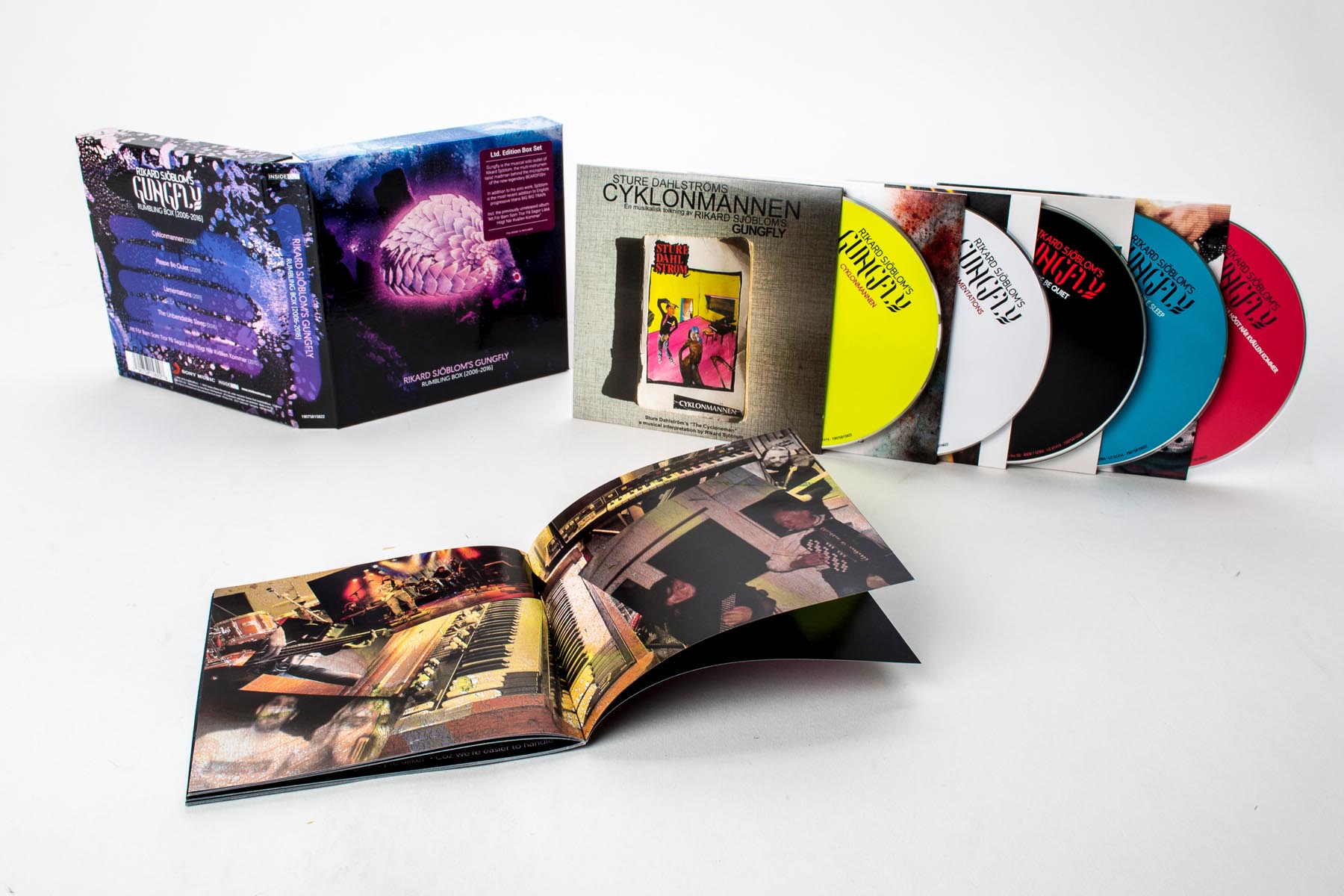 Throughout most of its history, Rikard’s Sjöblom’s Gungfly is essentially a one-man band.  Rikard is an insanely talented multi-instrumentalist, singer, and writer who knows no limits.  He can conquer any genre from cool jazz to folk to virtuoso prog to disco pop to thundering metal.  Rikard’s body of work cannot be defined by genre, but a common thread can be found connecting all his material — It’s brilliantly composed and performed.  I can say without hyperbole, I feel he’s the both the Lennon and McCartney of my generation.  Every project he touches, whether it is your style or not, has a tremendous level of compositional mastery showing a clear understanding of what makes great music great.  Most everything he’s written lands as it should. The heartfelt sections are tender, the serious sections are solemn, and the fun sections are a joyous celebration.

Sjöblom heart has belonged to music his whole life, learning to play the accordion at the age of five before moving on to guitar, piano, drums, and more.  Several of his solo/Gungfly works are written and performed alone, but some notable figures are present from time to time. Brothers Petter and Rasmus Diamant frequently contribute drums and bass and are consistent touring members of Gungfly.  Keyboard support is sometimes added by Sverker Magnusson and Martin Borgh.  Fellow Beardfish alums Robert Hansen (bass) and David Zackrisson (guitar) make appearances as well. 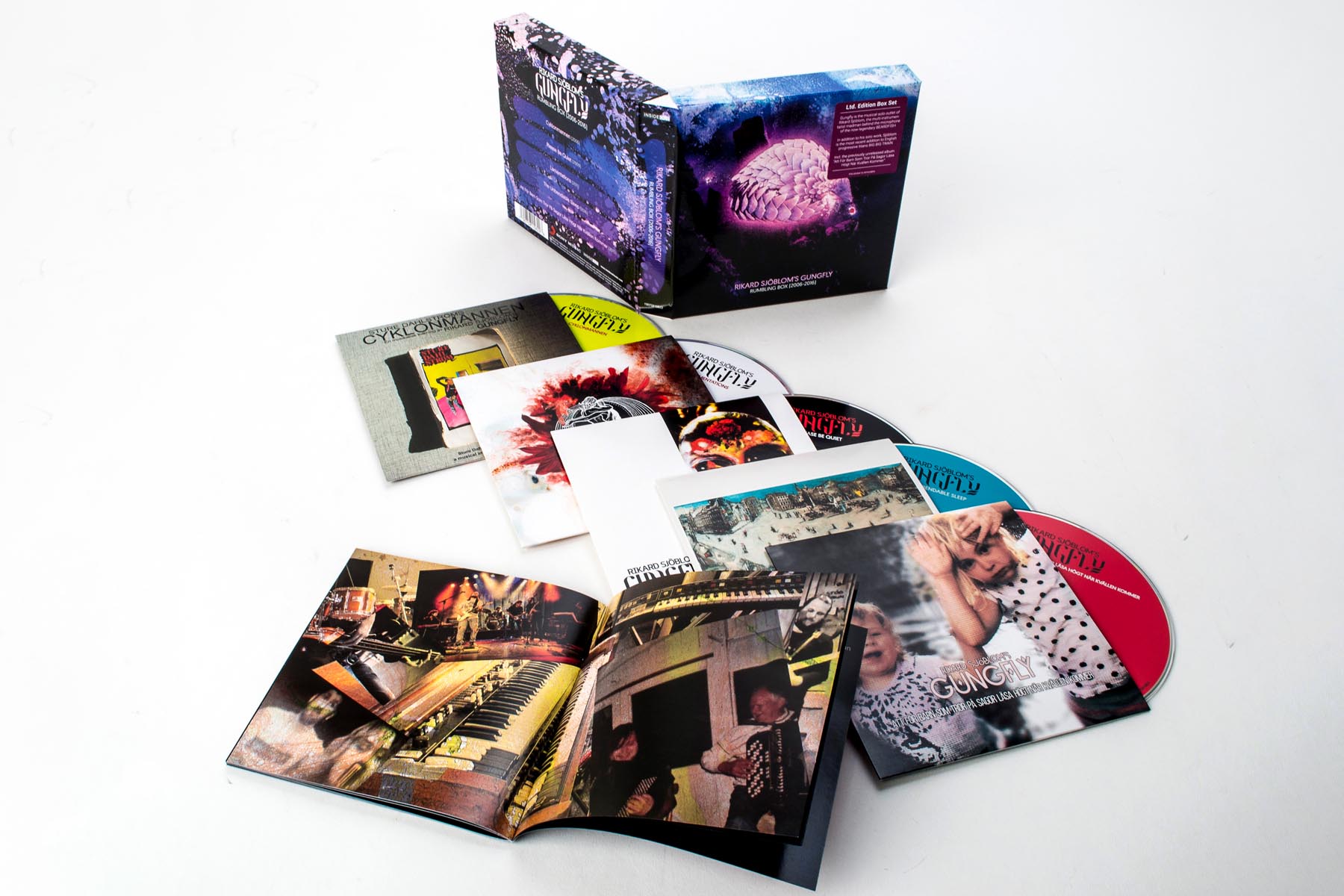 Another view of the “Rumbling Box” Set

The new collection Rumbling Box contains five discs, incorporating all the official Rikard Sjöblom solo/Gungfly works except the most recent 2017 On Her Journey to the Sun which may have been considered too recent for a rerelease.  Much of the work represented throughout the box was composed during Rikard’s stint leading Beardfish.  As a consummate composer, Sjöblom’s songs span multiple genres, so not all songs properly fit the Beardfish catalog. Releasing these songs under a different name made sense.  Still, as Rikard was the driving force for Beardfish, it’s easy to make comparisons between the two lines of the discography.  While these discs contain good amounts of prog elements, they range well beyond into so many genres that it makes the most sense to look at each disc individually.

Disc one is the 2006 release Cyklonmannen — which translates to The Cyclone Man.  The work is Rikard’s musical adaptation of the book Cyklonmannen by Swedish author and jazz beatnik Sture Dahlström.  Though the album is an instrumental, it is vivid in its portrayal of the novel with distinct themes and a story-telling progression.  It’s up-beat proggy jazz rock with an assortment of lead voices from wind instruments, guitars and Rikard’s signature Hammond organ.  It’s meticulously crafted with catchy rhythms and enough little whimsical flourishes to keep you discovering new things even after repeat listens.

Although the 9-song story is only 36 minutes it is followed on the same disc with an impressively faithful live performance by a group of musicians assembled by Rikard known as Den Gyllene Orkestern (The Golden Orchestra).  While the material in the live version is largely the same as the studio release there are variations and nuances in the delivery that contribute to an altered feel worthy of a listen.

Rating: 7.5/10.  Highly recommended, but only for fans of instrumental jazz.

2009’s Please Be Quiet is Rikard’s first official release under the Gungfly name.  This easily approachable collection takes a huge tonal shift from Cyklomannen or anything that Rikard was doing with Beardfish at the time.  Songs range from three to five minutes and have clear mainstream appeal.

Many cuts have a soft-rock, blues, or folk singer/songwriter vibe while others are straight-forward feel-good rockers.  Again, all songs are composed by — and almost entirely performed by — Sjöblom himself.  Vocals shine throughout demonstrating an impressive range through tender moments (“Whiskers”), powerful climaxes (“Go On Alone”, “On and On”), soft falsettos (“No Remorse”), multi-voiced chorale arrangements (“Son of Sun”), and sing-along hooks (“Rumbling Boxes”).

While the album is straight-forward enough to appeal to all music lovers, enough progressive rock elements are hiding beneath the surface to grab fans being introduced to Gungfly through Beardfish.  In fact, the space-rock ballad “Roland No More” could fit comfortably on a Beardfish album.

A deeper appreciation for the album is acquired after repeat listens when you notice some of the subtler moments.  For instance, “She Is Gone Again” has a brilliant transition from folk guitar to hypnotic droning that had gone unnoticed for the first two years I had the album.

Rating: 8/10.  Best for music lovers who appreciate great composition regardless of genre.

On Lamentations, the second album to be officially released under the Gungfly name, we are once again treated to a collection that spans genres.  The most fitting label — probably because it is so broad — would be to just call it a rock album, but there are nods to metal, jazz, pop, blues, surf and even Latin.  Lamentations steers more progressive than the previous disc and is decidedly heavier.  Guitars guide most songs and are firmly set on overdrive.

Musically, many cuts could be reworked to fit a Beardfish release, but lyrically they feel more personal than much of what was happening with Beardfish at the time.  “Bringing Down the Walls,” a solid rocker that starts with prog elements and transitions into groove rock, is deeply personal focusing on angst from growing up in a broken home.

Song structure on Lamentations is lengthier and more complex than the previous album.  Most tracks are now over five minutes long but never overstay their welcome.  “We Will Never Leave” is almost 10 minutes but continuously evolves treating us to a journey from hard rock to atmospheric tension to metal to whimsical and back to rock.

Simply put, The Unbendable Sleep is a masterpiece.  It would easily land within my top three albums of 2016 and is some of the best work Rikard as ever done.   Firmly rooted in a classic prog rock style, Rikard delivers stellar, intricate instrumentation and a modern update to the traditional 60s/70s “love not war” message.

Here we find the most cohesive album of the box set.  Where some of the other discs feel simply like collections of great songs with no connecting thread, this album delivers a unified and fairly consistent experience throughout.  In fact, the only odd man out is the two-minute accordion instrumental “Building a Tent For Aster,” a catchy little ditty that feels perfect for a sitcom intro — think The Office meets Cheers.  While it doesn’t seem to fit, it’s still a fun, joyous, light-hearted intermission, and I love it.

The album is top-notch from start to finish, but two tracks rank amongst my favorite Rikard Sjöblom songs of all time.  When meeting someone who has never heard of Rikard nor Beardfish, “Under Northern Skies (Villemo’s Song)” is my track of choice for an introduction.  It perfectly showcases Rikard’s talents through his vocal layering and lyrics that capture the innocence and beauty of childhood.  The epic closing song “Love and War, Part 2: Lucky Star” has a groovy head-swaying vibe and treats us to an energetic instrumental mid-section with bass, keyboard, and guitar solos before bringing us full circle to where our journey began — Rikard reminding us that we are more the same than we are different.  “I am you.  I am who you are.”

Once again showing his willingness to throw away the mold, the final entry in Rumbling Box is a previously unreleased collection of tunes sung entirely in Swedish.  Much like his other works, this assemblage is difficult to describe as it doesn’t adhere to any one genre.

In a strange way, this album reminds of the Beardfish song “Sleeping in Traffic,” a 35-minute prog epic that perfectly mimics the absurdity and randomness of dreaming in the way that it abruptly switches genres multiple times throughout the song, from rock to disco to metal to pirate shanty.  The major difference, though, is that rather than putting all these ideas into one prog epic, Att För Barn gives us all these unique vibes in 10 fully fleshed out, complete songs.  Well, minus a pirate shanty, of course.

Rikard describes Att För Barn as “a pop-oriented, meticulously thought-out and carefully produced collection of songs that stretch the spectrum of music for the love of music from three people with three pretty strong wills. In Swedish.”

“It was very much intended as Gungfly’s 3rd album but then I had some trouble deciding what to do with it,” says Sjöblom.  “We worked very hard with it, to say the least, and really liked the album, but I think it was a bit too different at the time.”

This would likely explain why Rikard felt it made a more appropriate “bonus disc” to the box set instead of a stand-alone release.   While I agree that it is very different that other material on this box, it’s still very good in its own right.   And for Rikard to pull in a metal-head like myself and have me singing along to a Swedish disco pop song… well, that’s the sign of a true musical gift.

Rating: 7/10.  Loads of fun but may fall outside the comfort zone for some.

Back in 2016, long before this box set was conceived, I was mesmerized by The Unbendable Sleep.  I wanted more, so I hunted down my own copies of Rikard’s previous works Cyklonmannen, Please Be Quiet, and Lamentations.  Each was a worthy purchase capable standing on its own.  Unifying all this material together in one box set makes it an exceptionally great purchase, especially at the insanely low presale price available at rikardsjoblom.com.

This is not just a quick cash grab rerelease of old material to sucker fans into re-buying things they already own.   Even though I already owned four albums included here, the brand new 5th disc and so many bonus tracks easily justify picking up this box set.  I counted 17 songs that were new to me — and good songs too, not scraps from the cutting room floor.

Whether you are a long-time Rikard Sjöblom follower, a progressive rock fan, or just a general lover of great music, I’m confident you will fall in love with something new found in this collection.  Open your mind and take a look at the inside of this rumbling box.