Never fear, Beardfish fans.  All is not lost.

If you are a fan of finely shaped progressive rock, with strong vintage 70s sounds, you should be familiar with Rikard Sjöblom. As the multi-instrumentalist madman behind the microphone of the now-legendary Beardfish, he sang about everything from personal loss to dreams of sneaking into the backstreets of some sleazy ’70s disco club. Wielding his keyboard like an 88-key progressive rock machine gun and a shoulder-slung guitar much in the same manner, Sjöblom truly was the face of the band. During his run with Beardfish, Rikard also produced two albums under the name Gungfly.  The Gungfly side project served as Rikard’s outlet for his less proggy, singer-songwriter soul rock ideas that didn’t fit the Beardfish catalog.

“Gungfly was born out of necessity,” Sjöblom comments. “The songs came to life whenever there was downtime with Beardfish or if a song didn’t quite fit within Beardfish’s (otherwise quite broad and eclectic) frame of styles. I basically started recording songs, mainly pop-oriented material, but being the type of songwriter and musician I am some prog slipped through under the radar as well. The name Gungfly is a Swedish word meaning ‘Unsecure ground’, it came from a novel I read where it was used to describe that someone didn’t have grounds to back up their statements, so I liked it and chose to call the project that.”

In 2016, Beardfish sadly called its quits.  In the wake of this announcement, Rikard embarked on a short North American tour in support of his remarkable solo album “The Unbendable Sleep”.  His band consisted of brothers Petter and Rasmus Diamant, who had also performed on prior Gungfly material. During these shows, four new compositions were presented along with the announcement that an album was forthcoming.  These new songs were performed in a 3-piece, straightforward rock arrangement.  Did this mean the new album would also be a simplified guitar/bass/drum rock album? Well, that new album is finally here, and, no, it’s far from straightforward arrangements.  This album brings an abundance of progressive rock complexity in the form of an emotional an often inspiring musical collage.  Some could argue that it fits nicely within the Beardfish catalog as a follow-up to 2015’s “+4626-COMFORTZONE”. 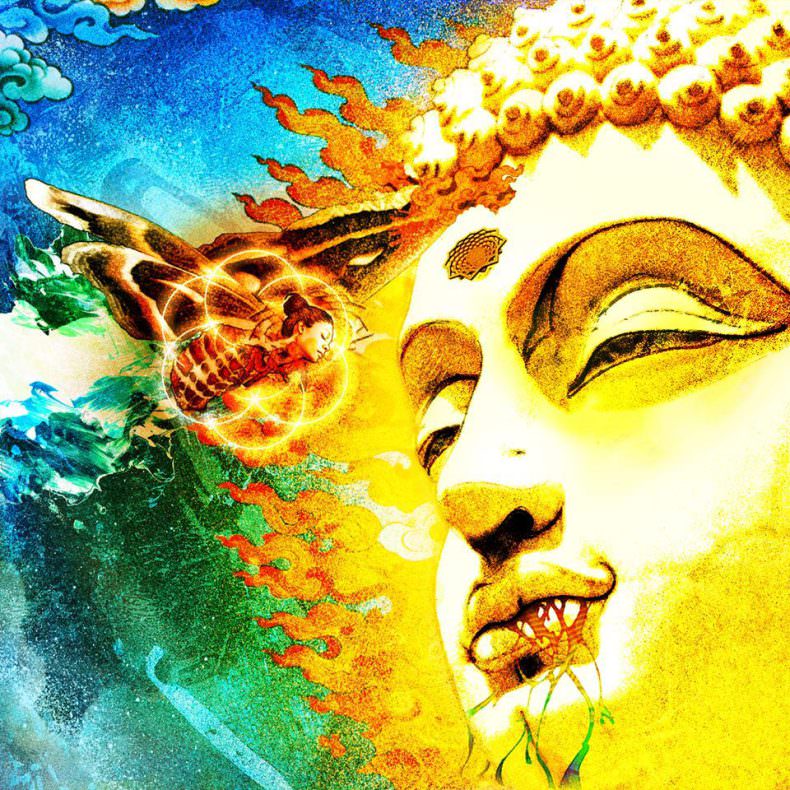 “On Her Journey to the Sun” Album Cover

“On Her Journey to the Sun” features 11 tracks. The Diamant brothers return on bass and drums but are joined by David Zackrisson (Beardfish guitarist).   Sverker Magnusson and Martin Borgh round out the line-up by providing additional keyboard support.  Rachel Hall (Big Big Train) offers a beautiful guest violin spot in “Over My Eyes”. The main attraction, however, remains Rikard Sjöblom’s soulful vocals, gripping guitars, mischievous organ work, and well-balanced songwriting.

The album offers everything that we’ve come to love and expect from his ever-evolving musical mind.  While I’m not certain that it should be labeled a concept album, lyrical themes surface throughout.  The vocal performance extends from confident, aggressive lower/mid ranges to a vulnerable and sincere upper register.  Meanwhile, his signature sense of complex-yet-catchy keyboard melodies and guitar work that spans the spectrum of folksy to downright face melting are all over the tracks.

Musically, we are again treated to a full array of styles. The 10 minutes long opener “Of the Orb” grabs your attention with its delicious synth and guitar harmonies topped off by Sjöblom’s unique falsetto begging ‘Stay with me, care for me, I will be yours.’  Further down “If You Fall, Pt. 1” is a short, somber offering based around a singular organ melody, offering a heavy contrast to the previous track, the upbeat, high-energy, bass-heavy rocker “My Hero”.

Gungfly is, however, most intriguing in the Gentle Giant-inspired instrumental breakdowns that overflow with imaginative, Seussian whimsy.  If that’s what draws you to Rikard’s work, you will immediately fall in love with the effervescent melodies in the nearly 12-minute instrumental “Polymixia”. Also, I would be remiss if I didn’t mention the other instrumental “Keith” The smooth, chill vibe on this jazz tune tenders an astounding level of maturity and restraint reminiscent of guitar legend Eric Johnson.

The album production and mix is superb.  Each listen will reveal new layers you hadn’t previously observed.  After casually running through about 10 times, I listened again through headphones on a quiet night and couldn’t believe the nuances that lay beneath the surface.  I can’t wait to see what I discover next. Fans of playful yet intricately-crafted, thought-provoking guitar and organ-driven prog-rock should take note of this album immediately. Rikard and the gang should be proud. Though the distance to the sun is considerable, I highly recommend you to embark on this journey.

Released By: Inside Out
Release Date: May 19th, 2017
Genre: Progressive Rock

“On Her Journey to the Sun” track-listing:

The special edition also features a Best of Gungfly bonus disc containing tracks from Please Be Quiet (2009) and Lamentations (2011).  This material is a great addition for those unfamiliar with Gungfly’s previous work, but serious Rikard/Beardfish fans will want to pick up the entire Gungfly catalog if they haven’t already done so.