When faced with the term “hardcore” in 2019, there is a cringe level that can only be topped by the term “metalcore.” However, if you handed over a cocktail consisting of vintage old school classic hardcore/crossover like “Crossover”/“Four of a Kind”/”Thrash Zone” era D.R.I., classic punk like “Hear Nothing See Nothing Say Nothing” era Discharge, the raw production of classic hardcore like “Animosity” era C.O.C. and the delicious riffy goodness of “Beg to Differ” era Prong, then that’s a recipe for appealing hardcore! Enter that very cocktail, in the form of D.C.’s Red Death. The band’s third release “Sickness Divine” may just have rekindled that love of early hardcore, where a more straightforward metallic approach keeps the disorientation of spastic punk in check.

The band has been compared to Power Trip and early C.O.C., but to your author’s untrained ears “Sickness Divine” draws more influence from mid-late 80’s D.R.I. and late 80’s-early 90’s Prong, than anything. Centered around prolific catchy riffs from Ace Mendoza and Will Wagstaff and bolstered by intense bully vocals from Chad “DHD” Troncale and a powerful raw production, Red Death has birthed its finest album to date.

From the melodic into before the kicking riff to the title track, the band has one aim in mind – to kick in the skulls of the listener with a delectable mélange of savage heaviness seasoned with just enough melody to envelope Troncale‘s coarse grating vocals. Indelible well placed pauses recall Prong, types that instantly summoning headbanging and the uncontrollable urge for a pit ready-breakdown which would obliterate all items within the immediate vicinity…so tread carefully where you listen! Songs like “Face the Pain,” “Sheep May Unsafely Graze” and album favorite   have all the elements that make old school hardcore/crossover so impressive, and destructive. 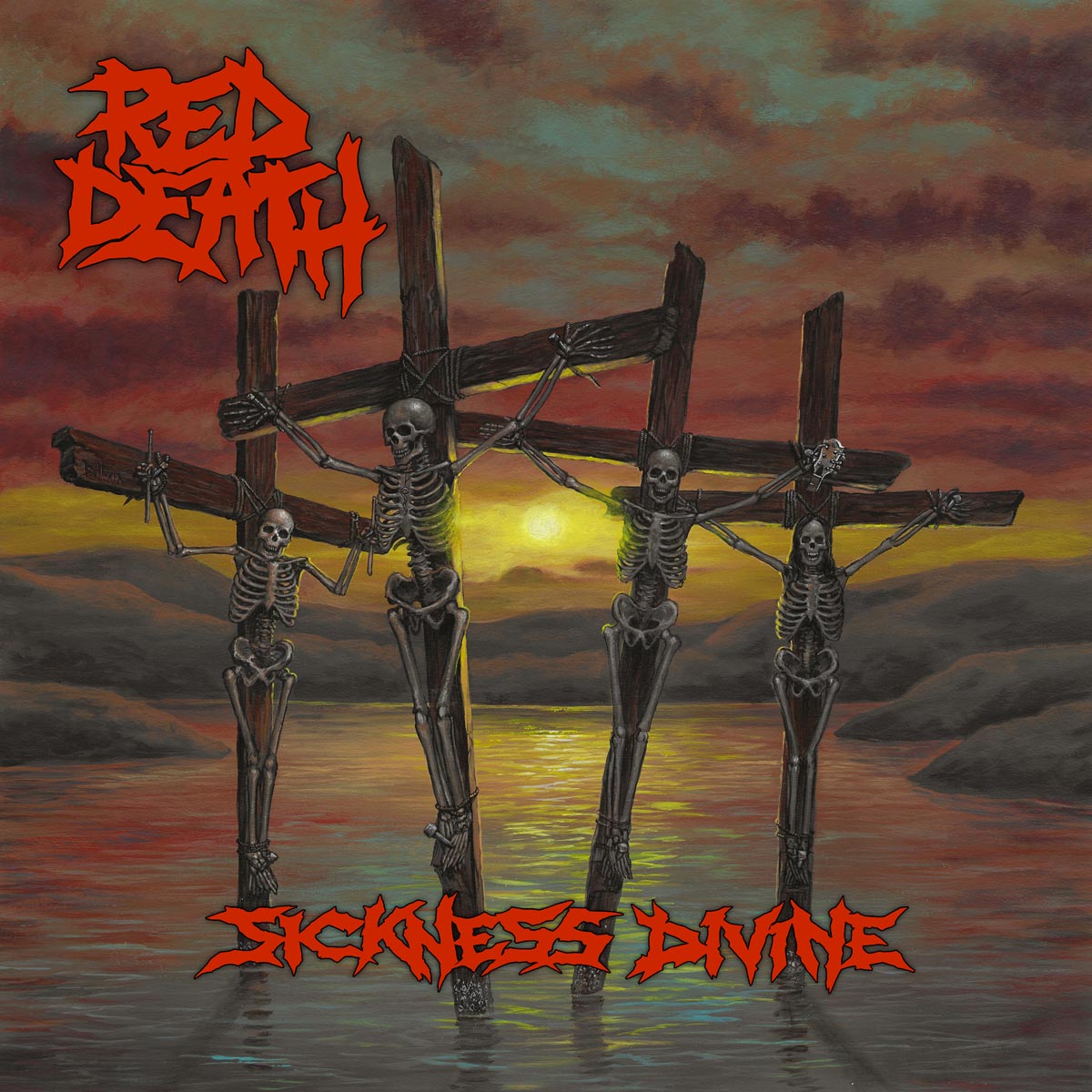 “Sword Without a Sheath” and “Ravage” lie in the weeds of both halves of the album, recoiled and ready to strike those with a furious, unrelenting 2:38 and 3:38 minute assault, respectively, for those listeners hunting serpents of unadulterated thrash. “Exhaltation of Decay” ends the album with that building cavernous and creepy feel of ancient Overkill (particularly the version of the song “Overkill” from the “Power in Black” demo). “Sickness Divine” is masterful in its simplicity and unyielding in its vitality.

It is that pure energy and highly memorable riff-centric assault that wins the day for “Sickness Divine.” The material falls on a well traversed path and makes no attempts to explore virgin musical ground (as if this exists), but it doesn’t matter. Red Death‘s brand of hardcore shouldn’t be a monocle for fans preferring one sub-genre or another, but rather a unifying bifocal for fans of all forms of metal. Old school thrash, traditional/classic metal, pure punk – Red Death has it all covered

Red Death plays hardcore/crossover the way it was intended in the subgenre's origin. By combining D.R.I., Prong, C.O.C. and Power Trip with classic metal riffs and well placed pauses, the riff-centric energy is unrelenting, subliminally commanding listeners to destroy. "Sickness Divine" represents the strongest release of the band's career with broad appeal for fans of punk, thrash, classic metal and extreme metal. To put it simply, this album is just so damn catchy!