In a world rich with the indulgent majesty of symphonic power metal, the fight for a sliver of an already crowded spotlight is one wrought by halfhearted attempts at musical innovations and tentative execution of new creative vision. Such bold reaches for the stars are stunning artistic vessels that have the power to take flight, or otherwise burn up in the atmosphere as they fall back to Earth, humbled. Among these new hopeful pioneers is RavenWord, a four-piece act hailing from Milan, Italy. Abundant with an operatic grace, yet steeped poetic tragedy, RavenWord show themselves as a merciless and budding powerhouse that holds mastery over both evocative lyrical finesse and compositional dexterity.

Formed in 2007 by composer and keyboardist Davide Scuteri, the band experimented initially with a self-titled demo and other exploratory activity before taking a hiatus. With each artist pursuing additional projects, the group reformed 2016 to forge ahead with their artistic vision, one that still lived strongly after almost a decade apart. Inspired in all forms by Edgar Allen Poe’s poem “The Raven,” RavenWord now present their full-length debut album titled “Transcendence.” Overflowing in a hauntingly beautiful display of opulent romanticism, bright melodies, and vocal grace, the musical depths of “Transcendence” are effortlessly captivating in a standout among other modern symphonic metal acts.

From the very first track, it is clear that RavenWord has come out of the gates prepared to stand apart in more ways than one. The most striking feature of this band is that they are entirely driven by keyboards, which carry the melodies and soul of each song with much more emphasis than the traditional driving force of the guitar. Filled to the brim with keyboard solos and a mix that heavily favors the keyboard as the main delivery vehicle, Scuteri’s expertise in composition creates a bright sound that rises above the oft-muddied strings of a power-inspired symphonic act. There is no doubt that Scuteri’s extensive work in other projects has culminated the wisdom which has made RavenWord so effortlessly deep and complex at their full-length debut, as the artist has spent his time since 2007 enriching his knowledge. This has included serving as composer in two other projects and keyboardist in more than eight other projects, some of which he continues to participate in throughout his time in RavenWord.

Of course it is not the keyboards alone which make RavenWord so entirely enthralling, but the other musicians that tie together the compositional vision Scuteri created. At the forefront is vocalist Chiara Tricarico, also with experience in a multitude of other projects, using her vibrant choral voice to cut sharply and uplift in the same breath. Yet another strength that RavenWord touts is the careful control over vocals contributions, both in the main and choir vocals, keeping them tightly reigned into the emotional atmosphere that each given track is attempting to create. The vocals are never treated as the only token which gives RavenWord its wings, but are rather added as another instrument which provides its due contributions to the work of art that is “Transcendence.” Unlike the gimmicks of many symphonic metal bands past and present, it is not merely the range of her voice which makes Tricarico an asset to the band: never does she strike piercing high notes merely for the sake of demonstrating her ability. Instead, each word is delivered soulfully, intentionally, adding to the romantic splendor that drenches the pages of “Transcendence.” 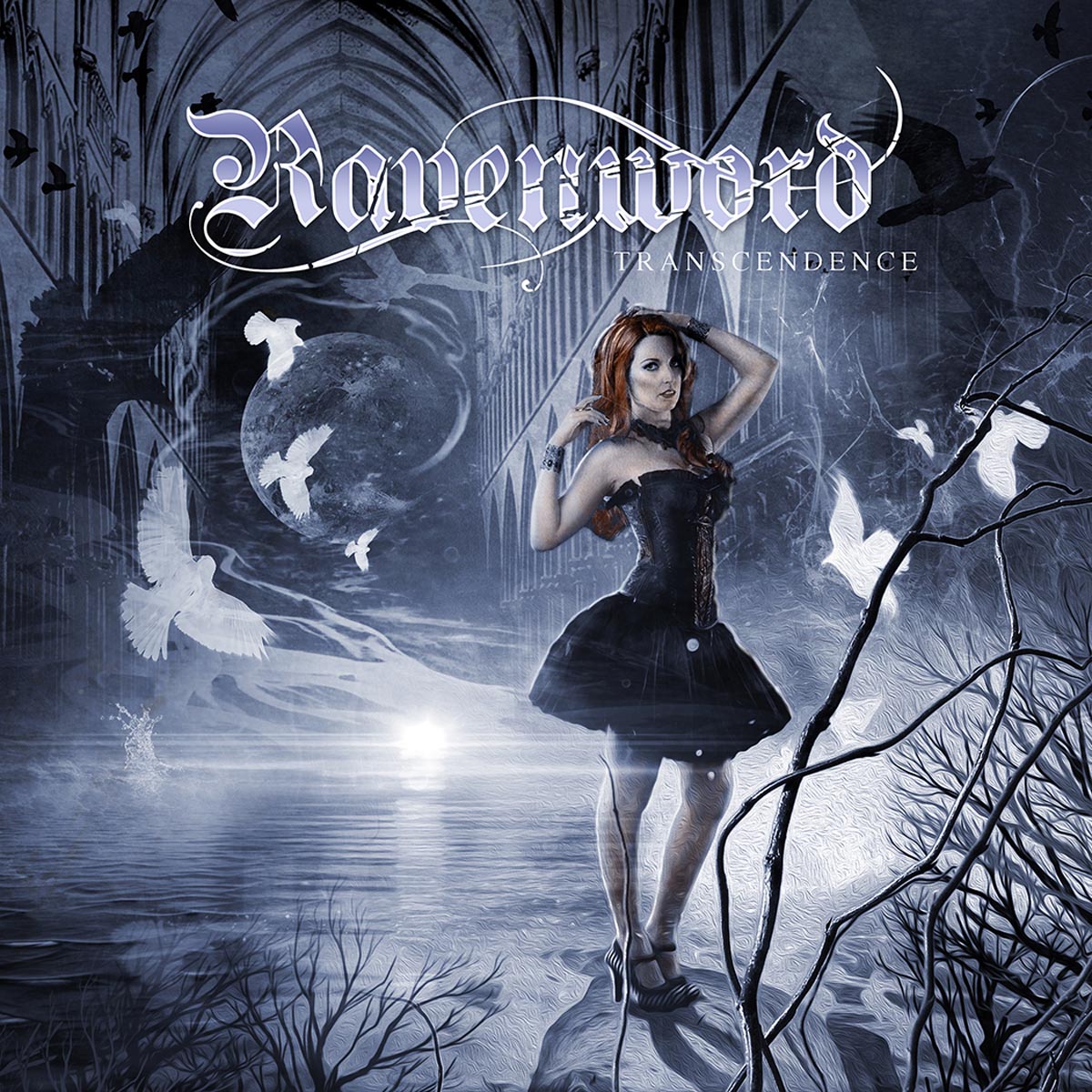 Opening track “Blue Roses” is one of the strongest on the album, for its opening is a beautiful feint giving the illusion that the listener is about to embark on a journey through yet another bland, lifeless attempt at the heavenly beauty symphonic metal can embody. Instead, what awaits listeners is a journey unlike any they have experienced before. There’s the sound of thunder, rain pouring down, splashing across an opening offering of keys almost reminiscent of early Symphony X. But within moments the speed of the song picks up, and Tricarico opes with a soft, mid-range tone that soon swings into a deep, emotional chorus. It is the chorus of this song that hits the listener without mercy, striking deep to the heart with the trenchant evocation that only a poet could craft. Each time the chorus returns, each instrument doubles down in its delivery, further deepening the textures that open a yawning chasm of temptation and promises of further elation. Matching the energy and enthusiasm of power metal, while embodying the bright keys of symphonic arrangement, “Blue Roses” is a perfect balance of a keyboard-driven band that still holds the grit and speed to match with its metal compatriots.

The momentum offered in “Blue Roses” carries on naturally into second track “Life is in Your Hands,” starting with a much quicker intro that speaks more to the power metal hues that RavenWord seeks to embody. The guitar in the hands of Cesare Ferrari seems to dance with ease, each note coming across with crisp precision as the speed ebbs and flows throughout the song. Matched in stride by the ever-dominant keyboard, this pairing continues to hold such variety in their partnership throughout the album that the duo never grows tiring, even as the album reaches its end. It is within “Life is in Your Hand” that Scuteri unleashes the first of many more artistic tools that “Transcendence” has yet to reveal, beginning as the electric keyboard driving the pace of the song cuts away, allowing Ferrari to dig in his heels and bring the heat with a focused guitar. But when Scuteri returns, it is with the deep and soulful tones of a rich traditional piano, rather than the flitting touches of an electronic keyboard. This variation among his instruments keeps each breath of “Life is in Your Hands” new and exciting, and welcomes the return of the traditional piano at multiple points later in the album.

Variation is a theme that carries on throughout the album, with new elements introduced the longer the listener gives themselves heart and soul to “Transcendence.” The next largest surprise awaits in fourth track, “Lullaby of the Last Petal,” which opens with a slow and melodic piano. A touching symphonic piece that lingers without vocals for an extended opening, every moment truly embodies the poetic peace of a soft-sung lullaby, but shifts seamlessly to a call for the riches of love and of passion. Given their inspiration by all things theatrical, “Lullaby of the Last Petal” offers the first taste of yet another element that weaves its way into the rest of the album: layered vocals accented by touches of an impassioned choir. Tricarico is a natural vocal lead, often enchanting, striking directly to the heart as she carries on through sweeping vocal passages that reach for the sun with open arms.

RavenWord continually offers open invitations to feel, whether it be in the weaving touches of near orchestral string arrangements, or in biting choir segments that emerge in later choruses. A continued call to emotional involvement is accomplished through a gradual introduction of the sheer variety that Scuteri pursued. No one track attempts to tackle all of their fruitful offerings in one fell swoop, but these elements are rather paced in their introductions, eventually culminating in a handful of bombastic closings. From a combination of keyboards and traditional pianos, to harsh vocals, booming choirs, orchestral arrangements, and even fleeting bass solos, Scuteri did all he could to use every tool in his compositional toolbox. The careful pacing and tempered involvement of these elements, a movement of incredible restraint, allows “Transcendence” to build organically, never becoming suffocating.  An example of this is one of the album’s most stunning tracks, the eleventh track titled “Crimson Lake.”

“Crimson Lake” is the culmination of the album’s many strengths, and embodies the soul of romanticism and metal as a combined entity. A deep bass is matched by harsh, growling vocals that echo in a menacing thunder, stark in contrast against the feminine melodies that Tricarico presents with such ethereal gentleness. The guitar and keyboards clash as though they were two partners sparring, solos matched in speed and intensity as each crest of the song piques and then fades. By the end of the track, each musician seems to be in perfect sync with one another, stepping in a complex dance and beautifully executed mix that still manages to mix poetry with the high-octane bite of relentless drums. “Crimson Lake” closes with a few moments of nothing but Ferrari’s imploring bass, leaving the breathless listener in a suspended state of awe and avaricious hunger for more.

As if it were not enough that the album includes thirteen tracks, each of the songs endeavors to tell an entire story, regardless of length. Most songs surpass the five minute mark by a healthy margin, and others still span more than seven minutes long. Yet despite their length, no track seems to overstay its welcome, often leaving a sense of yearning as they draw to their conclusion. And even as different as each track is apart from one another, the chronological story they weave is one that is irresistible to succumb to, flowing in a natural rhythm from the opening notes until the closing echoes. Devoid of self-congratulatory or commercial gimmicks, “Transcendence” is a genuine artifact of artistry and creative passion that seeks to write its own story.

With a practiced composer and keyboardist at the wheel, RavenWord was already ahead before they began. But with their bold fearlessness to combine an ever-increasing number of gallant stylistic flairs, the textures and decadence of “Transcendence” bring them ever-closer to the romanticized stars which strive to reach as they soar. Unafraid to present multiple tracks which derive from the simplicity of pure piano and vocal pondering, yet similarly unabashed in the fiery articulation of electric guitars over thundering drums, RavenWord is a potent delivery of artistic truth, one presented without compromise.

With a keyboard driven composition, poetic grace and tragedy are the defining features of the melodic grandeur RavenWord embodies. Balancing power and elegance as two edges of the same sword, “Transcendence” strikes to the heart with its effortless evocation of romanticism alongside a tempestuous yearning for grace derived from an ambitious composer’s delight.