Fans of progressive rock music already have it hard enough as it is. The casual music listener already thinks we’re pretty snobby, a little elitist, kind of neurotic, and well, pretty strange. (Pun intended.) But when a progressive rock enthusiast tells a friend they are listening to the third and final album in a trilogy based on Stanley Kubrick and Arthur C. Clarke‘s film 2001: A Space Odyssey, and it’s in Italian… well, sometimes we deserve the looks we get, don’t we?

Thankfully, the juice is worth the squeeze with the latest album from Italy’s RanestRane (roughly translated to Strange Frogs, for English speakers). RanestRane, celebrating a 20th anniversary in 2018, is a band who has found a really cool and clever source of inspiration for their music: in a style nicknamed CineConcerto, their albums are based on classic films for which the band has a tremendous amount of respect, such as Werner Herzog‘s Nosferatu (the album Nosferatu il Vampiro) or another of Kubrick‘s works, The Shining. Since 2013, however, they have been hard at work on what might end up being their career-defining achievement, A Space Odyssey, with Part One being devoted to the Monolith, Part Two being devoted to HAL-9000, and now, the end of the trilogy “Part Three: Starchild.”

This all sounds like pretty heady stuff to the casual music listener, and indeed, even for this reviewer, it’s taken a decent amount of research to wrap the head around. Kubrick‘s film is widely regarded as a masterpiece, and to many, it’s one of the greatest films of all-time, mentioned in the same conversations as Citizen Kane and The Godfather. To attempt tackling the subject matter in musical form certainly must be a daunting task, and RanestRane does it well… or so we think?

Here’s the rub. As I have said in the past, even in episodes of our Talking Perspectives series, I have a ton of respect for non-native-English-speaking bands who sing in their own language, and wish more bands would do it. But RanestRane limits the impact and reach of this trilogy by singing all of their lyrics in Italian. Obviously, it’s their mother tongue, so it makes sense to do it that way… and the music is most likely better for it, as sometimes listening to a band’s translated lyrics to English can be a little rough on the ears for us, despite how much we might love the timbre of their voices. While the band has had some help conveying the message of 2001 over the course of the trilogy, using soundbites from the movie at strategic points in the albums, as well as English narration courtesy of Marillion‘s Steve Hogarth (more on that later,) it’s difficult listening to a series of concept albums based on an English-language movie and not feeling like you’re missing out, and it inherently limits the impact of the material on the listener, unless they’re fluent in Italian. We can make inferences on song titles, such as Materna Luna, but the greater lyrical passages of each song are lost on us. (That’s what I get for minoring in German in college.)

With that ugly business out of the way, RanestRane has ultimately crafted a fantastic series of thoughtful, artistic music. Across all three albums in the trilogy, the band does an incredible job of bringing a 21st century musical feel to a film celebrating its golden anniversary this year, and yet it fits pretty perfectly with the film itself. One can imagine watching and listening to the two side by side, like so much Dark Side of The Moon and The Wizard of Oz. 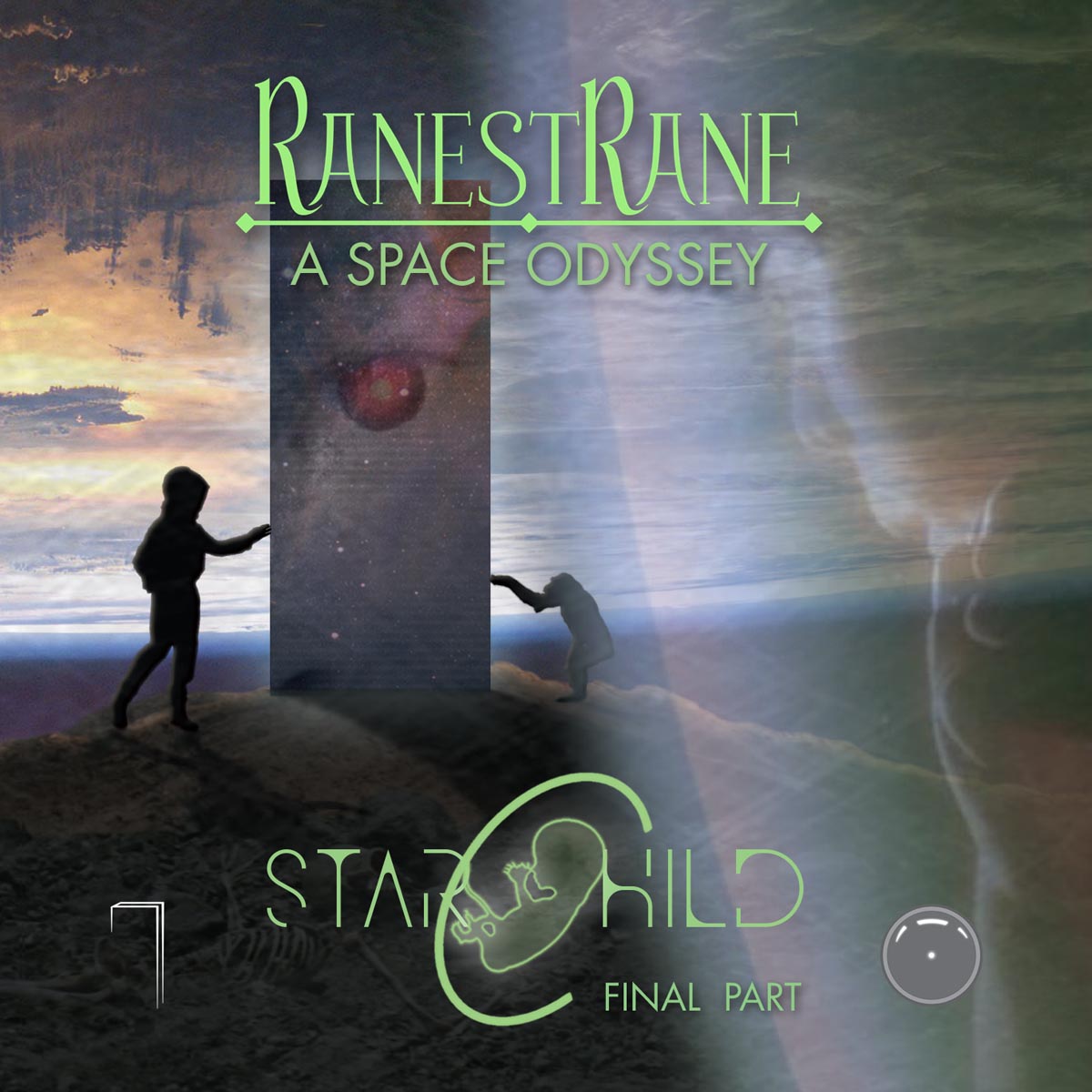 There are space-age arpeggio keyboards aplenty, heavy driving rock sessions evoking the panic of certain moments in the film, and quiet, somber acoustic guitar moments which make the listener ponder how alone we are, or are we, in infinite space. All the while, we are led along on the journey by Daniele Pomo‘s soulful and heartfelt vocals, and despite things being lost in translation, at least Italian is a beautiful language, and sung with great beauty (the acoustic / vocal duet in “Stargate”, for example, being one of the most poignant moments of the trilogy). The band also uses moments from the film to great effect, such as having the ship’s klaxon blaring in rhythm to the beat of the music, and handing off that rhythm to Meo‘s rumbling bass guitar. Or using the soundbite of the ship’s computer HAL-9000’s final words losing speed as HAL sings us his final song, set to the band’s music. And RanestRane was smart to include the finale of the second part of the film on the beginning of this album, so we’re treated to the most quotable soundbite of all (“Open the pod bay doors, HAL.” “I’m sorry, Dave, I’m afraid I can’t do that.”) on the finale of the trilogy.

The entire effort, across all three albums, works very well, and would have been bungled by a less competent band, coming off as laughable rather than dark, mysterious, and completely dramatic. The music is fairly straightforward prog-rock, with the usual ’70s influences (as well as a generous helping of Marillion,) but anything too outside the lines might not have worked for presenting such a classic work. This music should not be difficult to digest for anyone who appreciates any progressive rock over the past several decades, but might not do a whole lot for fans of the newer and more adventurous sounds coming from bands like Haken or Animals As Leaders.

Speaking of Marillion, for those listeners who might be new to RanestRane and this trilogy, it’s worth noting the band’s history with Steve Hogarth and Steven Rothery. Most recently, fans might recognize RanestRane as Hogarth‘s backing band on the second half of his recent “Friends, Romans – H Natural with RanestRane” live CD and DVD releases. A little further back, RanestRane opened for Marillion at the Marillion Weekend 2015 Port Zélande edition and rocked the crowd with selections from the first two parts of the trilogy. The band even has history with Steve Rothery‘s solo band, with keyboardist Riccardo Romano even appearing on Ghosts of Pripyat. Marillion is no strangers to collaboration, though, and has repaid the favors to RanestRane, with Rothery providing some instantly memorable lead guitar work, and as mentioned earlier, Hogarth contributing masterful spoken / sung narration. All of these moments lift the albums to an even higher state of being.

All told, Starchild, is a fitting finale to the story, which is admirable considering it tackles probably the most enigmatic and nebulous part of the film. Any fans who already have the first two parts definitely owe it to themselves and the band to see it through to the end. Listeners who are new to the band should definitely check this out, especially fans of Marillion or Arjen Lucassen‘s work with Ayreon and Star One. Ideally, the best way to enjoy this, is to watch 2001: A Space Odyssey, whether it’s a first viewing or not, and then press play on RanestRane‘s “A Space Odyssey” and begin at the beginning with Part One: Monolith, and see it all the way through to the dynamic conclusion of Starchild. Well, maybe not all in the same day, unless you’re on vacation. That’s a lot for even the strangest of frogs.

RanestRane gets high marks for the entire “A Space Odyssey” trilogy, and for this part in the trilogy. They took an album concept that is unbelievably hard to pull off, and did it, with songs bursting with melody and memorable moments, but unfortunately lose a lot of emotional impact in the translation of languages. The band are all outstanding players in their own right, and collectively, and are helped along considerably with the guest appearances from Marillion. Daniele Pomo is a much better lead vocalist than most drummer/vocalists one tends to hear, but it's a shame he's stuck behind the kit when they play live. It's tempting to give the album's originality a 10, because what a crazy idea this was and how many years it took to pull it off successfully, but since it's based on a non-original work, well.... And the production value is quite good. It's not the best-sounding album you'll ever hear, but crank it up on a solid sound system, and you'll be quite pleased. It's also worth noting the band sells the entire trilogy as a vinyl box set through their website. As RanestRane plans tour dates in honor of the band's 20th anniversary, it should be interesting to see how the entire trilogy is represented. Maybe fans can hope for a DVD or Blu-Ray release of the entire trilogy played