In the pit, impact is always imminent.

Whenever a discussion regarding thrash metal’s ascendancy to mainstream fascination in the late 1980s occurs, one of the last nations to be raised as a notable purveyor of the style would be that of France. To be fair, there were a few noteworthy bands that had a brief run during the original golden age such as the blackened blend of Venom and early Teutonic aggression that was Morsure’s Acceleration Process back in 1985, alongside a few early 90’s entries out of such acts as crossover thrashers Madhouse and Vincennes’ answer to Watchtower in progressive thrash outfit Threshold (not to be confused with the British progressive metal act). But in terms of total output, the former realm of Gaul was better known for rock-based acts at that time, though the thrash deficit has definitely been decreasing in recent years, and may well continue to do so if Melun-based revivalists Psychoid have anything to say on the matter.

Although being in existence since as far back as 2008 and not seeing any lineup changes in the years since, this band didn’t really become active in a studio capacity until their 2016 demo/EP “Thrash-Test,” which drew fairly heavily from a number of well-known bands from the style’s early years. Their 2018 LP dubbed “Thrash Impact” took the same 4 songs from the preceding independent production, rerecorded them with a more ambitious production, and expanded the number to 9 solid, riff-happy anthems that combine the rustic simplicity of Exodus, with the infectious hooks of Metallica and the abrasive attitude of Nuclear Assault. With the passage of two years and a new album looming in the near future, this quartet and their label M.U.S.I.C. Records have opted for a reissue to this well-received debut that features a new, yet still very aggressive and working class mix and production job.

By the standards of what thrash metal has been in the past decade thanks to the strides made by more aggressive acts like Power Trip and Havok, this album hearkens back to a more classicist mode of the sub-genre that was common to acts like Violator and Evile. It’s difficult not to miss some fairly clear homage riffs to the seminal works of Metallica, such as a few clear nods to “Master Of Puppets” on the mid-paced crusher “True Chatter” and a handful of moments on the otherwise Anthrax-infused, bass-happy beast “TV’s Grime” that ring quite similar to “Four Horsemen” off “Kill ‘Em All.” They do a good job of putting their own spin on things and fall short of morphing into a tribute band, largely by approaching things in a more raw and brazen fashion, spearheaded by a raucous drum performance and a primal shout out of front man Thomas Cottenceau that’s quite similar to vintage John Connelly. 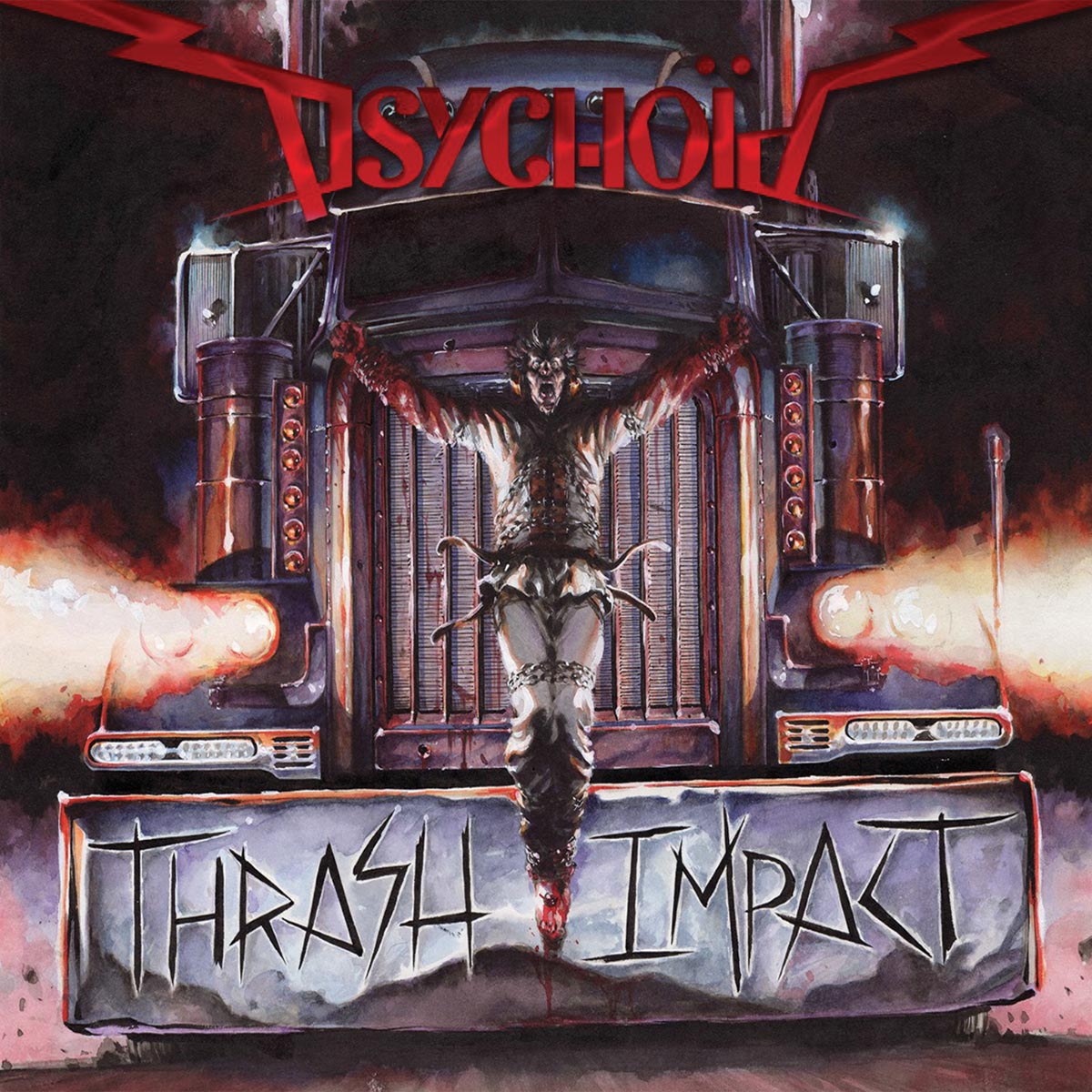 Despite working from a somewhat basic and derivative template, Psychoid proves capable of supplying enough energy and the right mix of ideas to make what is largely an upper mid-paced, groovier mode of thrash metal flow well. The swift opener “Anarchy” lays on the chaotic goodness with a vengeance, occasionally conjuring up memories of when Wehrmacht’s “Shark Attack” was unleashed, while more middle of the road fits of crunchy goodness like “Live Die But Buy” and “The Old Scapegoat” feature some well crafted signature riffs and flashy guitar solos that remind a bit of the early days of Overkill, but with a somewhat glassier character. Bassist Remi, despite delivering a performance more befitting Frank Bello than any of the more shred-happy 4-string wizards of yesteryear, all but dominates the mix and also throws in a few prominent solo intro segments like on the nasty speeder “Out Of Control” and the extended instrumental jam “The End Of Time.”

While not quite the most impressive or memorable offering to come out of either 2018, or 2020 when considering that the current reissue will likely reach a larger audience, this is one of those albums that is fun while it’s playing and definitely gets the job done. There is some room for improvement in certain aspects of how this band’s sound is presented, particularly in mixing the drums, which are a tad tinny and feature the cymbal sound a bit too prominently. In its existing form, it could almost pass for something that either D.R.I. or Nuclear Assault could have put out in the late 1980s, though a tad louder and perhaps a smidge messier at times. But while maybe not as memorable as some other entries that graced the thrash world’s ears towards the close of the 2010s, it definitely brings the impact factor and keeps it firmly at the helm, which is most of what counts once entering the pit.

Though having a modest run during the golden age of 80s thrash metal, France has been making the rounds since the style’s early 2000s revival, and yet another newcomer fold has come rampaging forth with a classic, old school approach that merges the mid-paced heaviness of Exodus with the abrasive, punk vibes of Nuclear Assault.