The dark liturgy of the Lycanthrope continues…

The legendary creatures associated with classic horror cinema tend to have a common root in the land spanning the northwestern portion of Romania, namely Transylvania. Much of this might be credited to a combination of the poor treatment of said land’s German minority population at the hands of Prince Vlad Tepes (aka Vlad The Impaler) and their correspondingly overactive imaginations. But be it the bloodlust of the mythical Dracula, or the even more horrifying literal manifestation of lycanthropy that is the werewolf, there is a characteristically German flavor to these now ubiquitous manifestations of our fears, hence the all too appropriate fact that one of power metal’s leading cheerleaders of the order of monsters Powerwolf hail from said nation.

Having solidified themselves as among the more theatrically oriented and larger than life acts of the second wave of the power metal revival (starting in the mid-2000s), Powerwolf has since taken their sound into more of an overtly cinematic direction since the turn of the decade, culminating in arguably their closest flirtation with heavy metal film score in their eighth album The Sacrament Of Sin. Though their short stint as a would be tag-along act to the more AOR oriented power metal sound of acts like Masterplan and Edguy caught them a fair deal of notice in 2005, it wasn’t until they began moving in more of a keyboard-oriented, symphonic direction similar to that of Turisas and Rhapsody Of Fire, complemented with a fair amount of church-oriented elements via a massive pipe organ sound and a greater stylistic affinity with the speed metal roots of German forefathers Accept and Helloween that things truly took shape, and this album sees this trend taken to its logical conclusion.

In an almost stereotypical fashion, this album begins things with a lone church bell ringing in the distance, like a less than subtle nod to the founding fathers of heavy metal Black Sabbath’s eponymous debut. However, in almost no time the musical landscape that leads off the opening number “Fire & Forgive” hits a beautiful symphonic feel comparable to any number of epic films released in the past 10 years or the opening prelude of an Equilibrium album, which is immediately chased by a barrage of riff happy speed metal and triumphant neo-classical trappings. Almost immediately it becomes apparent that the decision of bassist David Vogt to cut heads on the guitar with Benjamin Buss has opened the band up to some new possibilities, namely that of dueling and harmonized lead work culminating in multiple interchanges throughout the album comparable to iconic Smith vs. Murray / Tipton vs. Downing battles of the late 1980s. 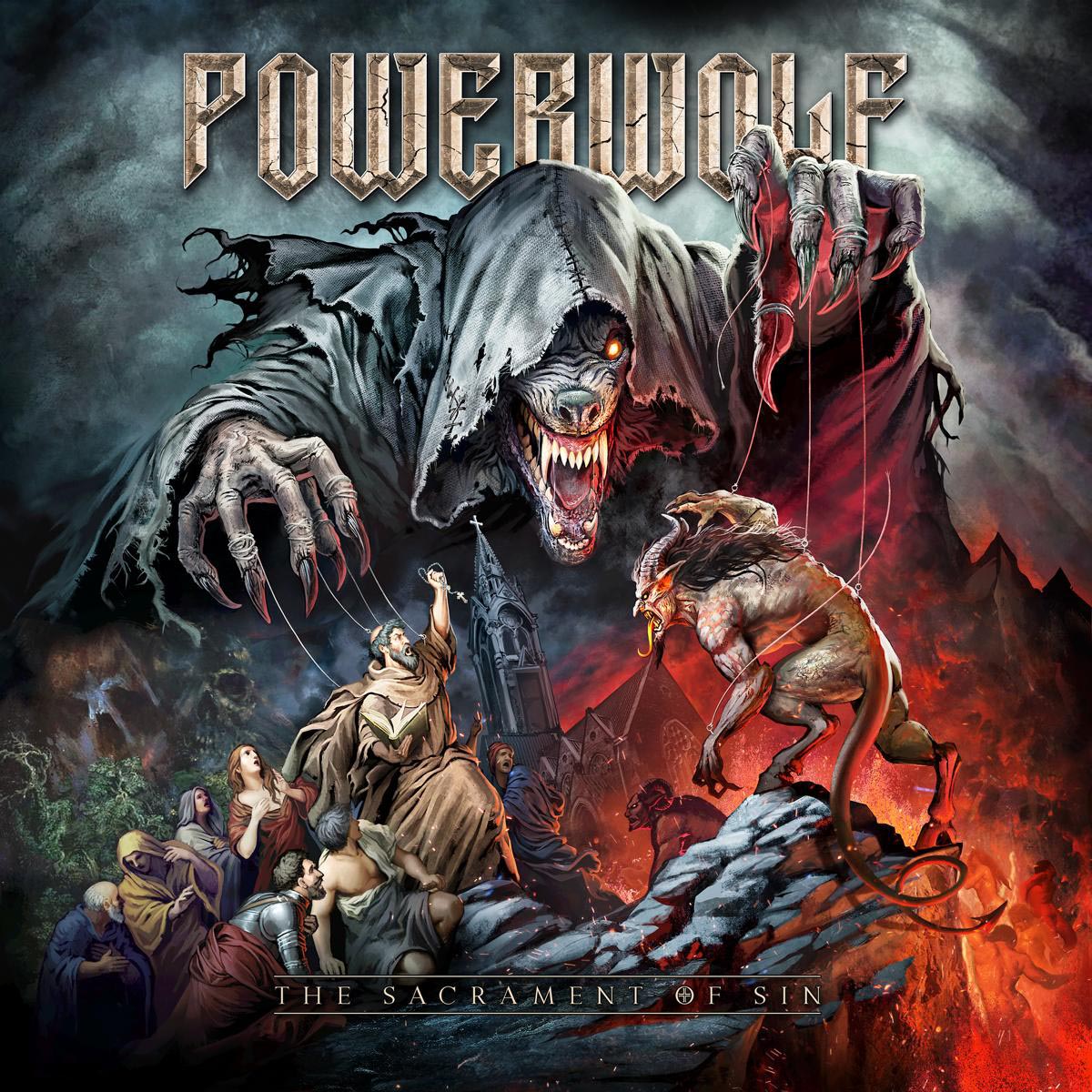 “The Sacrament of Sin” Album Cover

The bulk of this opus’ contents present varying degrees of familiar and surprise relative to past works, though overall things fall fairly close to the similarly triumphant and infectious character of its predecessor Blessed & Possessed. The obligatory mid-paced anthem slot with tenor range opera vocals and blaring organs aplenty is filled by the lyrically tongue-in-cheek “Demons Are A Girl’s Best Friend”, while a somewhat more unique blend of the same concept with a Celtic folksy twist emerges in the bagpipe-led ode to holy war “Incense And Iron”. In a jolting turn of surprising events, one of the strongest offerings to grace this collection is the piano-driven power ballad “Where The Wild Wolves Have Gone”, a poignant and unforgettable mixture of old and new that features vocalist Karsten Brill (aka Atilla Dorn) at his absolute best. All the same, those who like their power metal fast, furious and Helloween-infused will find a highly impressive array of German speed and melody in “The Sacrament Of Sin” and “Fist By Fist”.

In a sense, this album was all but foreshadowed by its immediate predecessor, as has often been the case as Powerwolf’s sound as evolved in a highly methodical and gradual fashion. The growing affinity with grandiose orchestral pomp and retro heavy/power metal sensibilities were so thick in how they reinterpreted the iconic songs that were covered on the Blessed & Possessed bonus CD Metallum Nostrum have essentially exploded upon each original song found here, culminating in yet another solid performance that is close to, yet not interchangeable with the previous three. It’s a bit more impact based and less nuanced than the rest of their 2010s offering, hence the author of this review finds it an ever so slight step down from said albums. All the same, this is a slab of high fidelity nocturnal goodness that will not cost this outfit any fans and likely pick up quite a few more before all is said and done.

“The Sacrament of Sin” Track-Listing:

A symphonic-leaning, liturgical excursion through the dark landscapes of Transylvanian lore, building upon the faster, nimbler power metal gloss that defined this band since the turn of the previous decade with a more technical and versatile edge