2020 brings, among other things, a new release from the UK based Ozric Tentacles. The Ozrics are an amalgam of multiple styles including progressive, pyschedelic, and even space rock. Formed in the eighties, the band has released over 30 albums and essentially serves as a vehicle for the primary songwriter and instrumentalist, Ed Wynne. In their earlier years there was a revolving cast of characters that contributed to each release. However, over the past several years, the Ozrics have solidified into more of a family affair. Ed‘s wife Brandi handles the bass guitar duties and his son, Silas Neptune, also contributes keyboards. Along with drummer Balázs Szende the lineup has remained consistent since 2012.

As someone who has followed them since the early nineties, I find early releases such as “Jurassic Shift” and “Waterfall Cities” as two highlights in their reportoire. Both exhibited a strong sense of melody and consistency throughout the release. The band has also been on a roll in the past ten years with consistent releases such as “Paper Monkeys,” “Yum Yum Tree,” and the preceding release “Technicians of the Sacred.” Their challenge with each new release is to add something new and different to their established, trademark sound.

Their music is swirling, hypnotic, almost trance like. When the band is firing on all cylinders, the music transports you to another world filled with adventure and fields of magic mushrooms are aplenty.

Much of the Ozric songs are based on somewhat of a similar pattern. An intro, melodic, repeating synth line that is soon joined by a propulsive bass and drum rhythm. Additional layers are then added such as guitar and additional keyboards. Eventually, an incendiary guitar solo crashes the party and the song may just charge off into another direction entirely. Unlike some other progressive instrumental music, though, the Ozrics never seem to be in a hurry to arrive somewhere. The music is more about the journey than the destination. 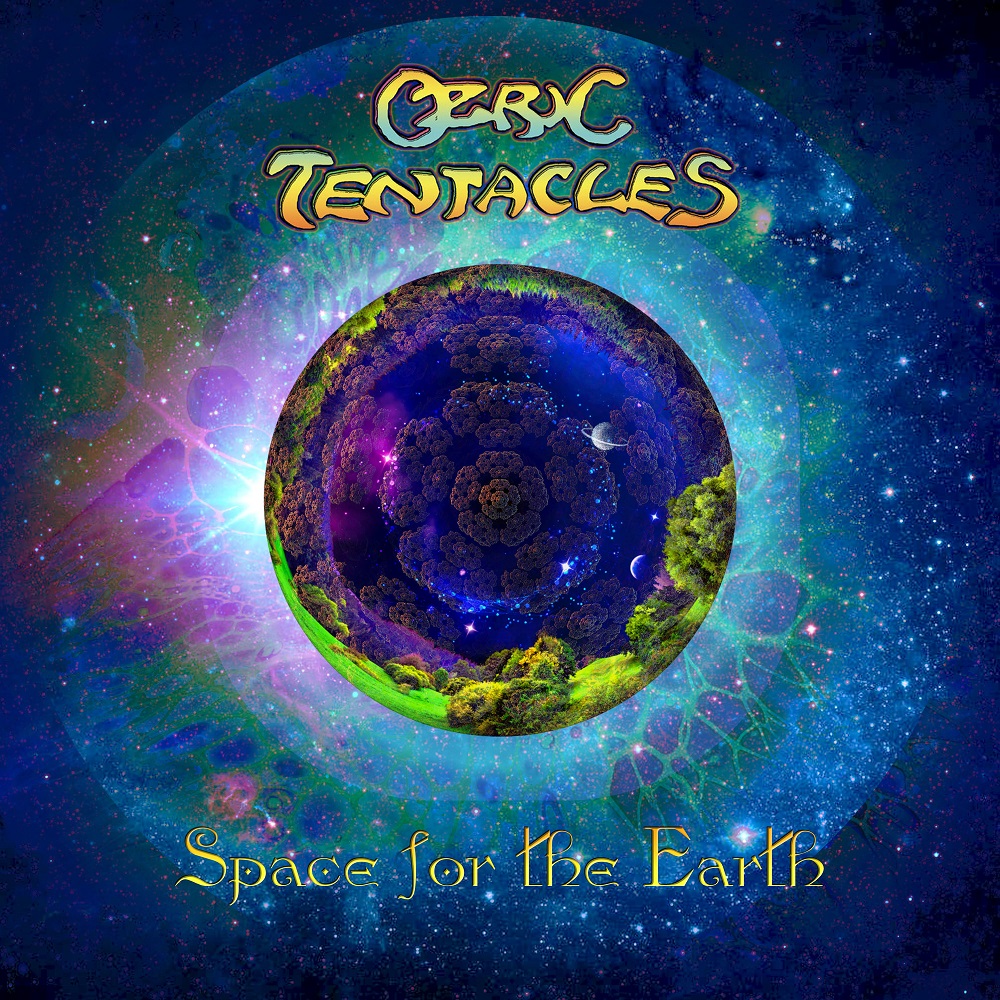 “Space for the Earth” Album Review

Their new release “Space for the Earth” certainly does not break this mold but is interesting for a few reasons. One, it is their first release in five years, their longest span between releases to date. Two, it finds the collaboration with former Ozric contributors such as original synth player, Joie Hinton, original drummer Nick Van Gelder and flautist Champignon. I found that in the past, the collaborative process tends to lead to a more varied and layered approach to their music.

The album kicks off with “Stripey Clouds” featuring some inspired drumming and a driving synth riff that is born out of a slippery opening synth melody. The listener is immediately transported back into the strange, trippy world of the Ozrics. Ed propels the song along with some whammy infused soloing courtesy of his Ibanez Jem guitar. The song closes out with a funky outro and phase one of your journey is complete.

Next up, the listener is dropped into “Blooperdome.” The strangeness factor increases slightly as the focus stays on the opening synth riff and some quirky keyboard coloring. The landscape shifts midstream with some nice acoustic guitar flourishes.

Initial single, the epic “Humboldt Currant,” is a highlight and definitely follows the similar pattern mentioned earlier, but with some nice additions to the formula. The song enters with the sound of waves lapping against the rocks as they synth melody fades into focus. Perhaps this is a nod to ‘Blue Bubble Studios’, the recording studio by the sea used to record the album. The songs travels across many lands and explores several different musical ideas along the way. This particular track contains some of the strongest melodic ideas of the album along with some sampled chanting that works well within the overall journey.

Up next is “Popscape,” which just may be my favorite of the album. It is an infectious tune that will have your head nodding to the groovy synth line while you begin your ascent into the astral plane. Some nice synth solo work is followed by some frenzied guitar soloing from Wynne as you are reluctantly returned back to earth.

The pace relaxes a bit for “Climbing Plants.” The groove of “Popscape” down shifts to a cascading synth riff that allows the music to really stretch out and breathe. Some really interesting percussion enhances the final half of the song to lift the music to another level of intensity.

The title track “Space for the Earth” fades in with some synth and acoustic guitar interplay. It slowly ebbs and flows until introducing a well constructed flute solo presumably played by contributing artist, Champignon. Again, the contributors really enhance the music this time around by adding different colors to the musical palette.

Closing track “Harmonic Steps” feels like a comfortable pair of shoes. It brings together all the elements that make the Ozrics special. A dazzling array of swirling, trippy tones splash around the aural soundscape. Whereas the prior double release “Technicians of the Sacred” felt a bit too long, “Space for the Earth” leaves us earthly beings wanting more. Hopefully this results in the band returning back to our planet in the near future.

So, how does “Space for the Earth” stack up in their very prolific catalog? It certainly is an inspired and creative release that is right up there with their past work. While it does not dramatically change or evolve their sound, it does not need to. One listens to them to be transported to a new world and this album is no exception. For those new to the band, the album is a great starting point as it covers all the elements that make them special. I would suggest to start here and work your way backwards in time as Ed Wynne and crew have really honed their sound over the years and this gloriously, trippy album is the result.

“Space for the Earth” track-listing:

One listens to Ozric Tentacles to be transported to a new world, and "Space For the Earth" is no exception. This album features all the elements that make this band special and includes a number of collaborations which enhance their sound even further.