I love live recordings. I’ve always been one with the opinion that all-time great bands have been those which excelled at their lives appearances, radiating through the pores all the inspiration and energy they comprised in the studio efforts in front of their audiences, but in a somewhat fresh and invigorating mode, thus connecting with the crowd at many different levels. And this kind of “bond” is essentially dissimilar to the datum of being capable to replicate on stage exactly the same sounds – note per note – of what your admirers learned while listening to the records over and over: I much rather like to enjoy a heartfelt performance where the band applies some creative freedom than a precise reproduction of my vinyl with some audience noise between each song. Great live albums are all about the sentiment they convey, the engagement the band/performer is able to create, some sort of space-time bubble where only the spectators matters.

Enters Live In Overhausen, the today-released live album by legendary New Jersey thrashers Overkill, recorded on April 16, 2016 at Turbinenhalle 2 in Oberhausen, Germany, where the band revisited their seminal Horrorscope album from 1991, and their feisty debut effort Feel The Fire, honoring the 30th and 25th anniversaries respectively by playing them each in full, and you’ll have to hang tight during two hours surrendering yourself to what sounds and looks as the definitive visual experience of a band instrumental in keeping the relevance of the thrash-metal as a genre for more than three decades. Thrash metal has always been a topic that provokes much dispute. Many claim it peaked in the mid 80’s, whereas some would say it was the late 80’s and even as far as 1990, with releases such as Rust In Peace, Seasons In The Abyss and Cowboys From Hell. Whatever your position is, there’s one truth: Overkill have been one of the best thrash bands in history because they have been able to consistently create top notch thrash material without compromising integrity or disinteresting their fanbase with unoriginal material. New Jersey’s infamous bad boys have never received the credit due for keeping the genre as big as it is, making quite the career for themselves and always delivering their trademark gritty, concrete-chewing badassery. To my ears they belong more to the Big Four of thrash than Anthrax does, and if someone comes up with a prize for consistency and sticking-to-their-guns for over 30 years, they will be no-brainer winners. 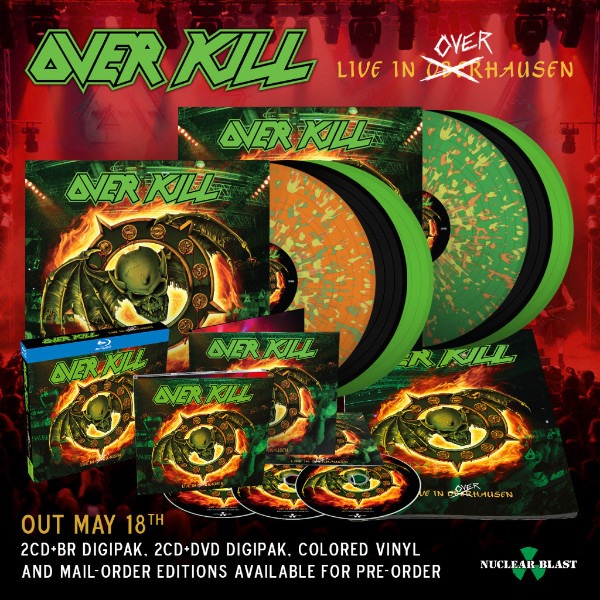 I’m not going to write a review of either one of the two albums, as the Internet of Things is plenty of them. Horroscope stands in my book as one of the best thrash metal albums ever made, even if it came during the aftermath of the departure of longtime guitarist Bobby Gustafson, and even if the original mix was not quite as good as its predecessor The Years of Decay. And Feel the Fire, if perhaps not so well-known by those unacquainted with the band’s early days, has stood the test of time as living proof of the beginnings of a band hungry for violence and vigorously rattling the heads of listeners all across this planet, creating a sound and performing it live before others before guys like Slayer or Metallica even began the writing process.

What makes this live release worth your time and money? For starters, what really matters most in a live record: the band’s performance. Two hours packed with blistering, relentless energy, and powerful, impeccably well-played and fun musicianship. Overkill have always been a band with their own signature sound, mainly characterized by Bobby “Blitz” Ellsworth roaring his lungs out in his signature high pitched shrieking voice, and here he goes above and beyond what I’ve heard from him before, singing like a possessed and commanding the audience with his characteristic sarcasm and hard-to-beat front-man attitude: “There’s only one rule tonight, and it’s that I am in charge because I say so”. From the wicked, thrashy “Coma” accompanied by a spooky intro and a searing guitar solo, to the groovish, heavy speeder “New Machine” or the undeniable ride of their ultimate live staple “Fuck You” – which brings the venue to an apotheosis ending, bathed in a thundering applause lasting for several minutes –  Live In Overhausen is a brutal manifesto of mid-paced mosh riffs, moody guitar and breaks, doomy bass lines with chugging atmosphere, and even some melodic thrash/doom moments, all of the above paired a crystal clear mix and production to boot. Noteworthy the performance of Pissing Razors’ Eddy Garcia as the stand-in stickman, he does an absolutely phenomenal job in the drum-seat accompanying the powerhouse, well-oiled musical machinery of D.D. Verni, Derek “The Skull” Tailer and Dave Links. Describing what an Overkill show feels like is tough, mainly because the music engulfs you and it doesn’t let go, and that’s exactly what transpires when watching or listening to this live release.

Do you want to enjoy an adrenaline-packed live show of unadulterated and pulsating thrash-metal in its purest form? You might as well go and buy this album, grab a six-pack and prepare to enjoy a wild-driven and reverberating ride with Bobby and company at the wheel. Highly recommended.

Three and a half decades later and New Jersey thrash masters OVERKILL remain steadfast in their ability to scorch your soul and thoroughly ravage your ears. "Live In Overhausen" is set to become the definitive live release of a band showing literally zero signs of slowing down, one whose tenacity and contributions to metal are genre-defining.