After almost forty years of listening to rock and metal, there have been many albums I’ve clicked with instantly, while others took a long time to digest and I didn’t fully enjoy them at first. It’s amazing how a few months or even years distancing yourself from an artist can do to your enjoyment of his music. In Obscura’s case however, I’m glad to say they’ve fallen inbetween those two categories: their new offering “Diluvium” has instantly enjoyable moments, while at the same time you know it’s only going to be completely understood (if ever) a few years down the road.

Coming from Landshut, Germany, technical death metallers Obscura are known for complex arrangements, impossible guitar parts and insanely busy drum fills. Their new album “Diluvium” is part of a quadrilogy which had its first installment in 2009, and almost ten years later, is set to be complete. The end result is as complex, ambitious and intense as the idea of a decade long saga might suggest.

This is the second album they release with the same lineup, and clearly having a seasoned and well- oiled formation has helped them and kept them inspired and tight. “Diluvium” is by far their most evocative, diverse and vibrant release to date. Whilst the influences of bands like Necrophagist and Cynic are still present, the band have found their own identity and distinctive style. Recorded with longtime producer V. Santura (Triptykon, Pestilence) at Woodshed Studios in their hometown, the album presents groundbreaking polyrhythms, dramatic songwriting, and jaw-dropping virtuosity.

“Dilluvium” kicks off with zero ambiguity regarding its mission statement, with the blistering “Clandestine Stars”. Insanely fast riffs and drum fills are mixed with growling vocals and a jazzy bass solo. Also worth noticing is the use of vocoder on this and other tracks, which gives an interesting and ominous effect. Rafael Trujillo’s solo here would give Dragonforce‘s Herman Li a run for his money, and then some. “Emergent Evolution” threads a similar path, with dynamic fretwork and tasty vocal arrangements. And if you ever wondered what Jaco Pastorius would sound like if he played metal, look no further, because Linus Klausenitzer’s bass lines will give you a pretty good idea of how this strange and beautiful combination would have worked. 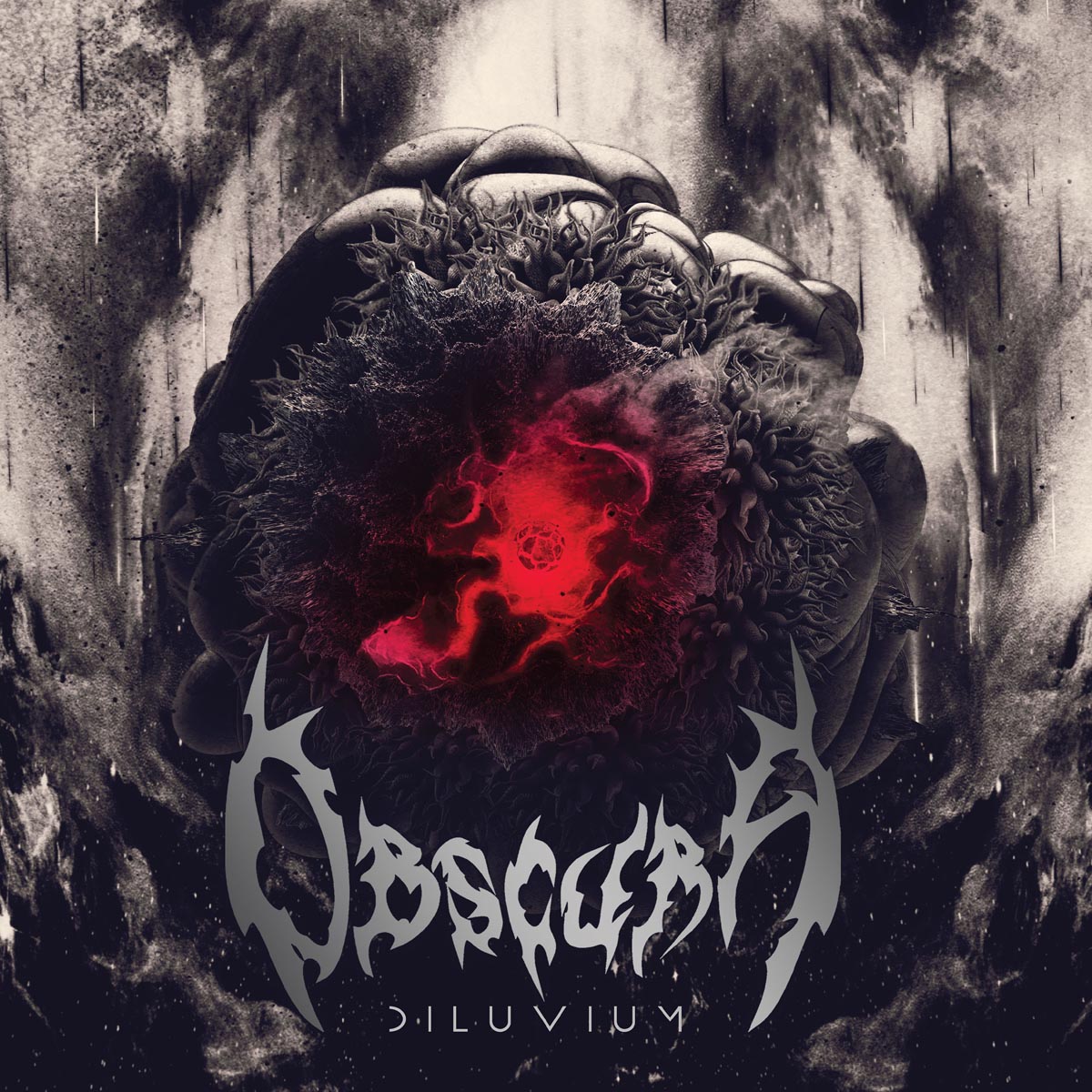 Another obvious highlight is the title track, which seems to summarize their sound in a more comprehensive way than the other songs in this release. The breakdown at 02:57 reminded me of old school Opeth, as was the case with several moments on track number four “Mortification of the Vulgar Sun”. On “Ethereal Skies”, the doomish tones are perfectly combined with ambient sounds and ear-piercing twin guitar harmonies. One of the most diverse tracks is “Ekpyrosis”, beginning with blast beats and heavy riffing, with a beautiful acoustic interlude halfway through, jazzy guitar solos and coming back to the devilish rifferama towards the end. Rafael Trujillo’s work throughout the album simply cannot be overstated – the contrast between the clarity of the notes in his solos and the weight added by the rhythm guitar is one of the main attractions of this enticing release.

The lyrics on the album are just as enigmatic and impenetrable as the song titles suggest. Drawing influence from German philosophers such as Schopenhauer, Goethe and Schelling, they deal with complex themes such as the origins and evolution of mankind, mortality and our place in the cosmos. Trying to grasp the concept behind these lyrics can be quite an ordeal, especially knowing that there’s a story interconnecting all the albums. Try it if you have the time, and let me know what they mean to you. One thing is for sure, they do fit the music on the album.

The crispy, clean and tight production of “Diluvium” is unusual for black and death metal standards, but not least of all in that aspect, Obscura manages to transcend genres. Every drum fill and guitar solo can be fully appreciated, and the delicate fretless bass sounds. I could go on and on about how diverse and dynamic this release is, but it certainly wouldn’t be comparable to picking it up and starting to absorb it. Take your time listening to this album – I have a feeling we’ll be talking about it for many years to come.

There’s a lot to absorb in Obscura’s “Diluvium”. Mixing genres as different from each other (and at times seemingly excluding) as jazz, prog-rock, death and classic metal can be a risky bet, but Obscura does so to tremendous effect. The transitions between passages are natural and seamless, and every track takes the complexity and dexterity of the material a bit further. A strong contender for album of the year, and one we will talk about for a long time.