“Aequilibrium,” or “equilibrium,” has a double meaning for Italy’s Noveria. On one hand, it is the basis of the conceptual album’s plot about achieving balance following a devastating earthquake in central Italy. On the other, the band’s perfect balance between power and progressive metal, a thrilling modern approach that has made the quintet one of the most appealing “newer” bands out there today – Dynazty without the glitz. Though not quite as catchy as previous efforts, “Aequilibrium” proves again that Noveria is no joke, and the band continues to deliver with the third studio effort.

Now that Noveria is a known quantity, the stakes are raised quite a bit. Though the gleam off the chrome may not be quite as bright as the first day I cracked open the prodigious debut “Risen” (in a year where the band was newcomer of the year by a country mile), Noveria has shown incredible maturity on both “Foresaken” (2016) and now here with “Aequilibrium.” The songwriting continues to be a strength – with sweeping choruses and elegant melodies performed with the usual heaviness. However, where Noveria leaned more power driven on the first two releases, the new one leans decidedly progressive. Make no mistake though, this doesn’t mean a power outage, but a slight power shift, where the straight line song structure becomes a little jagged.

Centered around the brilliant vocals of Francesco Corigliano and anchored by Ethernity duo Julien Spreutels on keyboards and guitarist Francesco Matteri, DGM bassist Andrea Arcangeli and drummer Omar Campitelli, Noveria presents a torrid display of riffs and wonderfully executed solos in the vein of Symphony X, DGM and a touch of (blessing) Evergrey. Those heavy riffs the band has become known for are once again accented with electronic elements (and occasional dubstep beats) from guest Giuseppe Bassi (Fear Factory), who also appeared on the debut “Risen” (check “Blind”).

Opening track “Waves,” which is arguably one of the band’s best tracks (of all three albums), sets both a fiery pace for the album and presents the concept story at its conclusion via narrator Kai Ephron. With equal pace, “The Awakening” follows that and Corigliano brandishes his unique vocal style – a blend of Dynazty‘s Nils Molin and Elvenking’s Davide Moras. The story of “Aequilibrium” is one of hope, strength and community – sorely needed in a world on the facing disasters daily. 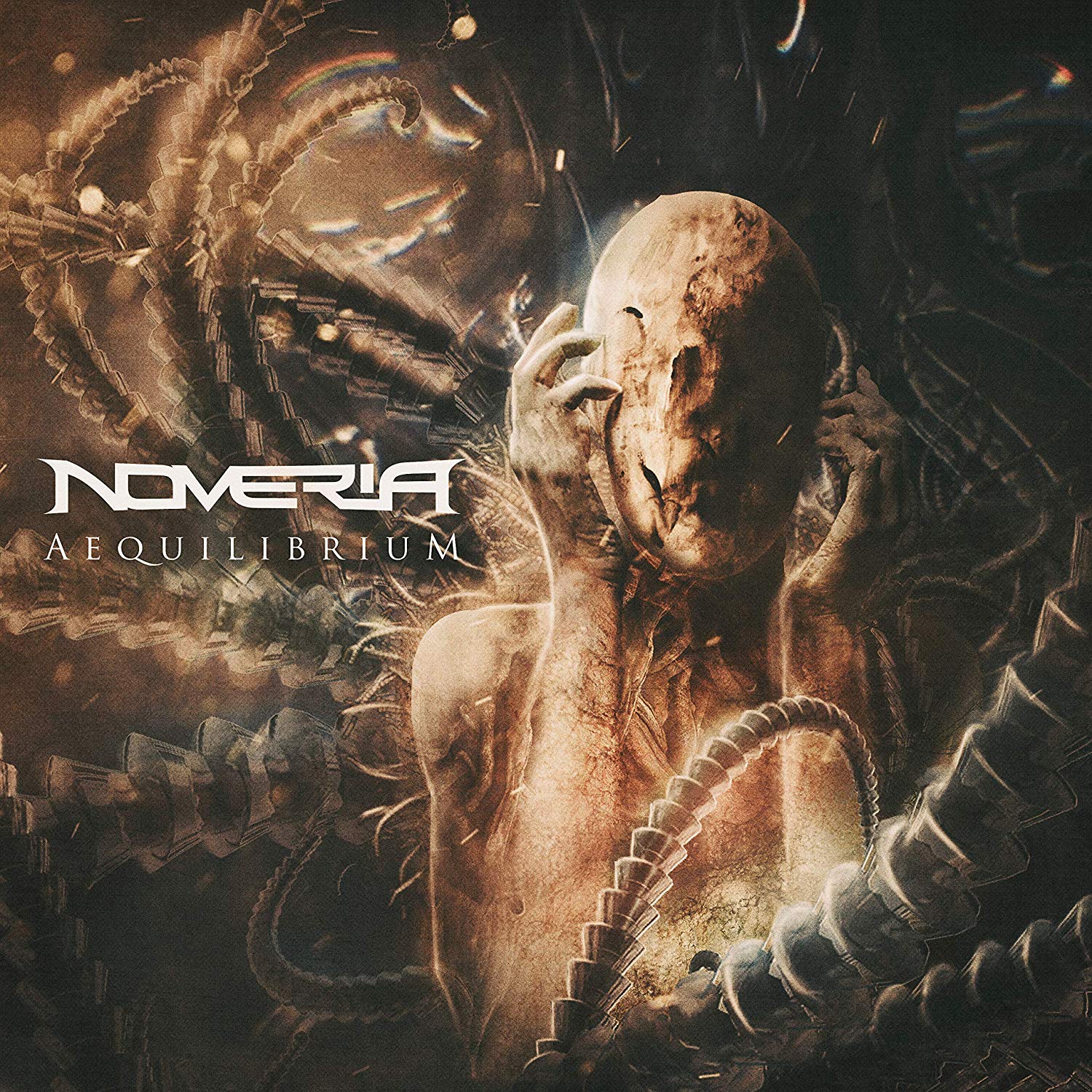 The only complaint would be a lack of sustained memorability throughout, which would set the album apart from not only the previous effort, but other greats in the subgenre. The band seems to be drifting towards roads well traveled and as a result the previously well drawn line of distinction is blurred. I should not that being heavy doesn’t always translate into notable and I’d gladly give up some of the serrated chug in favor of something a bit more catchy. The critique isn’t on the entirety of “Aequilibrium,” but there is filler material here where there wasn’t before.

Highlights on the rest of the album include more straight forward crushers “Blind” and album favorite “Broken,” the high octane “Stronger Than Before,” the sweeping climactic “The Nightmare,” the fetching chorus of “Losing You” and the beautiful closing power ballad “Darkest Days.” One of the album’s most striking songs is “New Born,” which could be set among the great tracks on Evergrey‘s “The Atlantic” and hardly anyone would notice.

Noveria have presented another strong release with “Aequilibrium,” where musicianship, performance and production continue to be the band’s strength. While there are some great moments which keeps the band on the rise, the album isn’t quite as memorable the previous two and the gap that once set the band apart has shortened a bit. Still, the concept story is engaging, the solos continue to dazzle and the album’s strongest songs are arguably among the band’s best.

While "Aequilibrium" is not nearly as catchy as Noveria's previous releases, it does feature some of the band's strongest songs. Overall the album is another solid modern power/progressive release which will appeal to fans with its engaging and relevant story line and wonderful melodies and solos as the band hits its core strengths of musicianship, performance and production. However, the once well marked line that set Noveria apart has begun to blur.