Nostalgia is by no means an alien concept to metal, nay even its younger and more extreme sub-genres, but lately there has been an extremely auspicious number of old line death metal icons making a monstrous comeback after an extended period of zombie-like dormancy. Up until recently the coup de grace of long overdue returns was held by one of the earliest progenitors of the style Possessed, whom earlier this very year unleashed a massive storm of mid-80s death/thrashing nostalgia to end all such storms in Revelations Of Oblivion, the first new studio LP out of the band in over 30 years. But 2019 has come to see a number of consequential innovators reclaim their former glory, and the long obscured persona of original Morbid Angel drummer and vocalist Mike Browning has reemerged from the intergalactic ether to put the entire death metal world on notice that the old guard still has a vast array of tricks still up their sleeves.

Resurrected from the ashes of the long defunct progressive-tinged death metal trailblazing act dubbed Nocturnus, Nocturnus A.D. has unleashed a truly astounding trek down memory lane for those who were originally there when The Key was first unleashed and all the world were witness to the possibilities that abound when keyboards enter the equation and conventional songwriting and tonal structures are either massive expanded or even ignored. The resulting debut of this newly born child of the original known as Paradox can be summed up as the long awaited successor to the aforementioned Nocturnus debut that reshaped the very parameters of death metal, and arguably the first real album to be worthy of the band’s name in upwards of 27 years. It reprises the same classic death metal sound merged with peripheral atmospheric gimmicks and technical ornamentation that appeared wholly alien to metal circa 1990, yet still fairly in line with typical Florida conventions as put forth by Death, Morbid Angel and Malevolent Creation in the early 90s.

Naturally the total picture presented here isn’t a complete throwback to the past, as there is a heavier overall presence to the album’s guitar and drum sound, resulting in something that is as much palpable to a current day recording in spite of its past-centered stylistic inclination. All the same, the true magic that results from this album is in its ability to reconcile the bizarre atmospheric aesthetic of a 70s/80s Sci-Fi movie with the brutal impact-factor of an old school death affair. It finds itself taking a similar approach to the kind of rabid technical fair that started the transition of Voivod from a technical thrash metal act into a purely progressive metal beast and is continually represented in the output of Vektor, but ultimately surpasses it by injecting even more chaos into the equation and taking the concept to its logical conclusion. Between the frequent shred battles between guitarists Demian Heftel and Belial Koblak that blur the lines between Slayer/Deicide-inspired clusters of notes and noise and the more precision-based approach of Jeff Waters, not to mention frequent Jordan Rudess-like solos out of keyboardist Josh Holdren, it’s a wonder that Browning can find time to sneak lyrics into the mix. 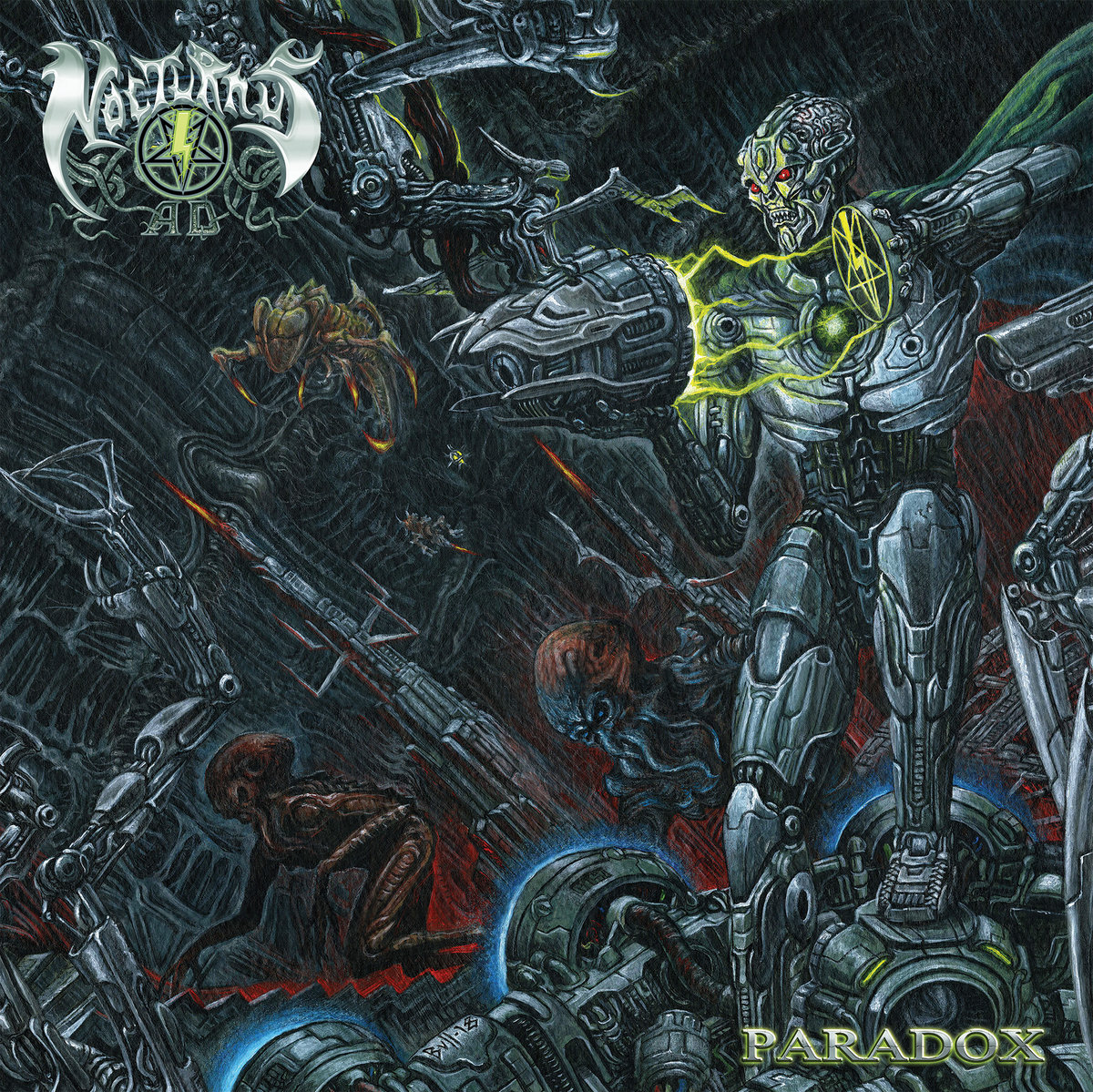 Despite the heavily chaotic character of these songs, there is definitely a sense of cohesion and even classicism at times that gives each individual chapter in this auditory story a heavily distinctive character. The fast-paced cacophonies of riffs and fury that are “Seizing The Throne”, “Paleolithic” and “The Antechamber” represent the proverbial tip of a massive ice berg of death thrashing mayhem that is chock full of virtuoso wizardry from all the instrumentalists in congress, with Browning managing a sort of demented, growling narrator who manages to be both vile yet intelligible while simultaneously blasting away at full speed on the drums. Occasionally things get a bit spacey and exotic sounding, such as the more melodically tinged, keyboard-infused Middle Eastern romp “The Bandar Sign”, which almost sounds like what Rainbow would have sounded like had they ever attempted death metal, while the abstract ambient sounds and tuneful structure of “Apotheosis” touches upon the same aforementioned aesthetic with a bit more of a thrashing feel.

The old school death metal world has seen a healthy swarm of new classics in the past couple years devouring the corpses of the naysayers, but this is one of those albums that is just in a class by itself, and can only really be readily compared to its 1990 predecessor The Key, which was arguably the biggest evolutionary leap that the genre had seen during that time period. If there is any flaw in this massive collection of genre-defining brilliance, it is that it is a lot to take in, but the initial impact factor and dense atmospheric backdrop is sure to rope in even the most casual death metal fan and command multiple listens and deep contemplation. Chalk it up to being an acquired taste this is extremely easy to acquire, which is the ideal niche for an album that seeks to stand apart from the pack yet still be able to rope in a broad audience. If there is one death metal album that falls outside of the “all brutality, all the time” formula that one would want to hear this year, this towering hybrid of interstellar and occult imagery is it.

1. Seizing The Throne
2. The Bandar Sign
3. Paleolithic
4. Precession Of The Equinoxes
5. The Antechamber
6. The Return Of The Lost Key
7. Apotheosis
8. Aeon Of The Ancient Ones
9. Number 9

Like an interstellar mirror reflecting back into the turbulent world of early 1990s death metal, a thought to be long dead pioneer has returned from the great beyond to remold the cosmos into their former glory