“This is my ‘quarantine’ album” says Neal Morse of his new release, “Sola Gratia”. That refers to the fact that for the first time in his career, Morse didn’t have cohorts Mike Portnoy and Randy George in the studio with him in-person as they arranged and recorded their parts. Instead, due to the obvious impact of COVID-19, each player recorded their performance in their own studios with Morse’s original songwriting staying largely intact. The result is a “Neal Morse” album with Morse writing, singing and playing the majority of guitars and keyboards on the album. While that might seem obvious, the distinction comes when an album is attributed to “The Neal Morse Band” where the material is co-written, arranged, performed & sung by all five members of the band including Eric Gillette and Bill Hubauer. Although Gillette and Hubauer still have cameos on “Sola Gratia”, their roles are as guests only. So, while the world awaits a future Neal Morse Band album, what can one expect from the new release under Morse’s singular name? Morse himself gives apt clues by comparing it to his previous solo releases “Sola Scriptura” and “?”. Taking those albums into consideration, along with last year’s “Jesus Christ The Exorcist”, one can have a pretty good idea of what this new album is going to sound like. For the faithful, that can only come as good news.

Embarking upon a new concept around the Apostle Paul – particularly his transformation from being a persecutor of early Christians to experiencing his own vision of the ascended Jesus and his subsequent conversion – Morse finds ample material for an intriguing story-line to fuel his prog explorations. As with many of his previous solo albums including the epic “JCTE” (see our extensive review here), the material is obviously Christian-centric at its core and thus may turn off some potential listeners, but when listened to as a story line at face value there really is nothing to get worked up about regardless of the listener’s personal beliefs. The title, which is Latin for “grace alone,” also appears to hearken back to the “Sola Scriptura” lyric, “…a man by candlelight reads, the just shall live by faith…” which is the catalyst for many of Luther’s actions told in such album.  This a coherent concept record with plenty of musical muscle and what could be more “prog” than that? The bulk of the album traces Saul’s (Paul’s) fixation on the error of Christians’ faith in Jesus, reveling in his own hubris and excess, and only at the finale does he experience the miracle of salvation while on the road to Damascus as he intends to “wipe them out once and for all”. This is very familiar terrain for Morse to use as songwriting inspiration: initial arrogance and confusion, ultimately leading to a breakthrough of redemption which is musically translated via a sweeping closing epic. Thus, while we’re inherently not going to be scoring high marks for originality, the real test is going to be: how strong is the material?

Let’s take an unconventional approach and begin with the second half of the album first. Conveniently demarcated by a short instrumental intermission piece entitled “Sola Intermezzo”, the latter seven songs on the album overall are longer in length and stronger in content than the first seven songs, so let’s go for the gold first. The ballad “Overflow” is one of Morse’s best, spaciously delivered with emotive vocals, deliciously delicate brush drum fills from Portnoy, and a short but moving guitar solo. The repeating refrain from a choir of female vocals leads to a meditative ecstasy which is so hypnotic that it could have continued several more minutes. Simply gorgeous. As good as that one is, “Never Change” is even better: a moody eight-minute Floyd-tinged high point that features some of Morse’s best vocal and guitar delivery anywhere. As blessed as the Neal Morse Band is to have Eric Gillette’s blazing guitar featured, it’s always rewarding to make room for Morse’s own tone and feeling being channeled through the six strings and in “Never Change” he triumphantly delivers. The bombastic vocal finale of the song will surely be a highlight when the song is performed live at Morsefest 2020 this September.

The album continues from strength to strength with “Seemingly Sincere”, dealing with the adamant faith of Stephen which gives Paul pause as he sees the conviction in Stephen’s eyes even as he is stoned to death. The nine-minute piece takes its time to build over a bed of electronic loops, an unusual sonic element for Morse. Ultimately the guitars and George’s bass take off in typical fashion, but it’s a good five minutes to get there which is a refreshing change of pace. Throwing in a minute-long synth solo which leads to a featured drum section from Portnoy, then culminating with a return to the powerful chorus, this is yet another killer track.

The transformation (aka the “conversion”) is yet to come. We all know it’s coming. How else could a Neal Morse album end? The inevitable grand finale is just waiting to be revealed, replete with a grand choir as the heavens break open, sunlight streaming down through the clouds and there is Morse at his keyboards, playing his heart out through a glorious epic chorus that brings it all together. In the case of “Sola Gratia”, this finale is the medley of “The Glory of the Lord” (no musical relation to the short piece of the same name on the “?” album) and “Now I Can See/The Great Commission” that brings heaven down to earth, complete with a lengthy, polished Gillette guitar hero appearance. And was that even another “Come on!” exclamation from Morse during his ecstatic revelation? Of course it was. While it may not reach the emotional highs of “Broken Sky” or “A Love That Never Dies”, it’s still a very well-arranged and impactful finale. Strangely however, the moment of Paul’s conversion itself – which one would think would be the climax of the album – isn’t clearly punctuated musically. It’s probably in the middle of a short piece called “The Light on the Road to Damascus”, but the problem with having so many bombastic moments throughout an album is how to make this one extra special and not just blend in with all the others? It’s not a big deal, but it kind of feels like Morse has buried the lead. On a more positive note, as a bittersweet sendoff, one of the best vocal melodies has been saved for Jesus’ final words to Paul in a heartbreaking melody: “Arise, go into all the world, I will be with you, I will be with you.” The album then concludes with a minute of Morse’s most tender solo piano playing, an evocative way to close this “Sola Gratia”. 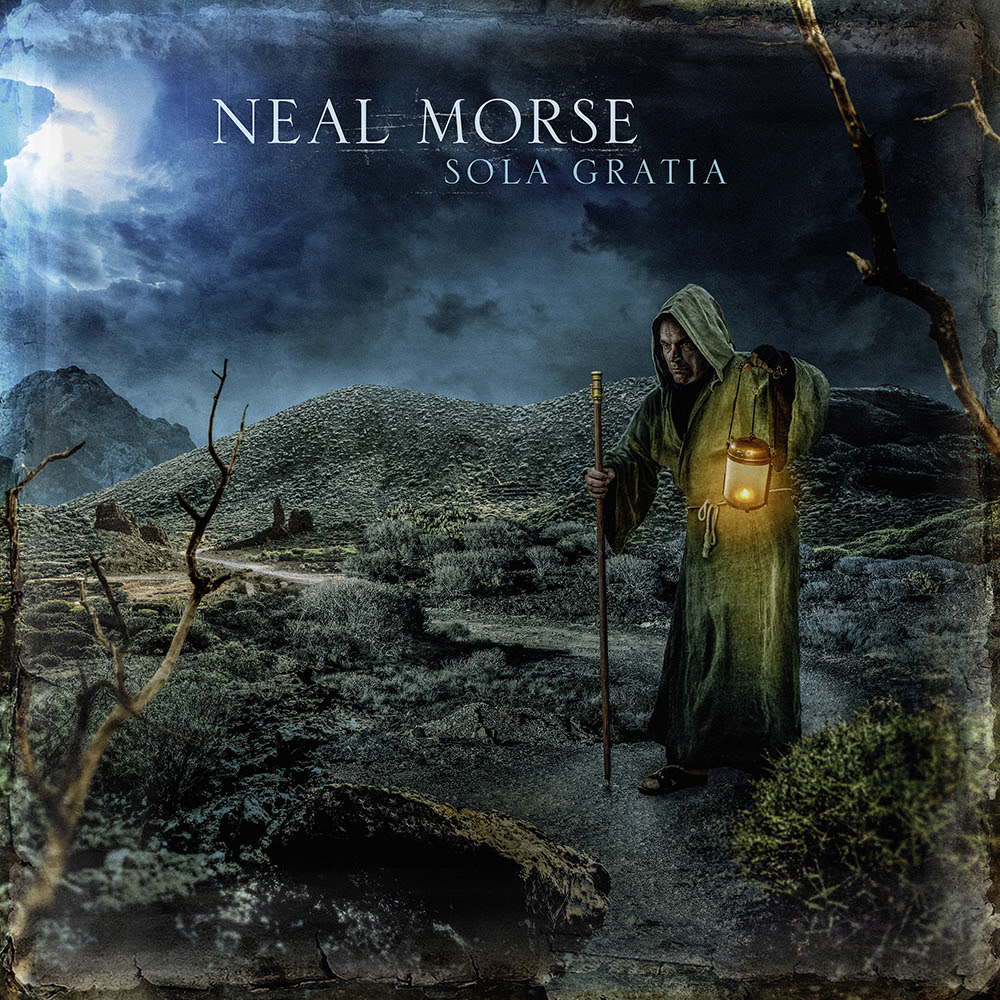 If the album closes in typical but satisfying Morse fashion, it opens in a similar way. A brief acoustic prelude gives way to an engaging…you guessed it…”Overture”. (As one cheeky listener recently queried: “If you ask ‘Alexa, play ‘Overture’ by Neal Morse,’ what happens?? System Meltdown??”) Despite the repetition of form and title, it’s a delicious six minutes of Morse/George/Portnoy doing what they do best: instrumental proggy overload of one theme after another. And as usual, once the listener digests all of the musical sections through repeat listening, it can become a favorite part of the album. The first single then follows, “In the Name of the Lord”, a satisfying rocker that smells of (and hints of) some of the hard-hitting tracks from the recent Pilgrim’s Progress albums. Featuring a devastating chorus and edgy performance, it certainly harkens back to the aggression of “Sola Scriptura”, in addition to the refrain of “In the name of God you must die” at the end. Unfortunately, subsequent tracks like “Ballyhoo” and “Building a Wall” feel too much in the vein of the “Jesus Christ the Exorcist” album and while the latter in particular isn’t a bad song (featuring Neal Morse on drums!), they take some steam out of the album’s arc of forging its own unique identity.

Stylistically, Morse is obviously keen to link his two “Sola” albums together through repeated musical motifs in what will perhaps become an ongoing series (there were five Solas that were kind of the “battle cry” of the Reformers during Martin Luther’s day, so a “Sola Fide” album might be next if Neal decides to continue on this theme). There are several overt quotes from Scriptura here, and even the chord progression of “Never Change”’s chorus has similarities to the progression of “Upon the Door”. However, while “Sola Scriptura”’s track listing chose to have three lengthy epic tracks with six “sections” each, “Sola Gratia” decides to go with fourteen total shorter tracks. Several of these are brief and flow one into another, so it would have been easy to bunch some of these into longer epic pieces. Semantics perhaps, but it’s interesting how Morse (usually with the guidance of Portnoy) chooses to present his material.

In conclusion, “Sola Gratia”’s strengths lay in its top shelf performances from George, Portnoy and Morse, a healthy dose of quality material, and of course its pristine production thanks once again to Rich Mouser. Still, aside from a couple of new sonic explorations, most all of the album is straight from the Neal Morse playbook, so fans will pretty much know exactly what they’re getting and long-standing critics will not be woo’d in. Morse and his band have set the bar high with the previous onslaught of double albums which can be somewhat of a setup at this point. How to top those? Ultimately, this album can sit comfortably alongside the aforementioned “?” and “Scriptura”, but it is up to the listener whether or not “Gratia” matches the heights of those albums. Still, this new recording has a lot going for it, even (or especially) for a “quarantine album”.

Released by: Inside Out Music
Released on: September 11th, 2020
Genre: Progressive Rock

Neal Morse returns with somewhat of a followup to his popular “Sola Scriptura” album, featuring his core musical partners Mike Portnoy and Randy George. Rooted in outstanding musicianship, sterling production and an array of diverse and engaging material, the album offers plenty to please long-time fans. Though it travels along fairly predictable lines, there’s no denying the talent on display and several pieces may be some of Morse’s most satisfying yet