Agents of Mercy was a multifaceted retro-prog style side-project, the brainchild of Swedish gifted guitarist Roine Stolt and vocalist, songwriter, and multi-instrumentalist Nad Sylvan. They released 3 albums between 2009 and 2011, joined by Lalle Larsson (keyboards), Jonas Reingold (bass) and Walle Wahlgren (drums). After the third album, Nad Sylvan was invited by Steve Hackett to take over the vocal duties during the Genesis Revisited tour in 2013. The eerie similitude of his voice with early 70’s Peter Gabriel and Phil Collins and his theatrical stage presence made him the perfect man for the job. However, Nad’s musical mind is not one that remains still for long. In 2015, he released his first solo effort in the form of the fine conceptual album “Courting the Widow”. While touring with Hackett he developed a character known as the ‘Vampirate’, a widow symbolizing death who is to be courted through every song, one way or another. With such storyline firmly rooted in a 17th Century atmosphere and blended with strong nuances of the 1970’s British progressive rock, the beginning of Nad’s vampire-infused musical saga set sail. That first album captured my attention (to be fairly honest, I’d always had a soft spot for vampirical tales) and a few spins revealed a record full of thoughtful compositions, memorable hooks, and haunting melodies exploring themes of love and loss, death and beyond, war, immortality, and sacrifice. Supported by the likes of Hackett, Nick D’Virgilio, Nick Beggs, Doane Perry, Roine Stolt, Roger King, Garry O’Toole, and Rob Townsend, Nad certainly proved he could do much more than sing Genesis classics.

Now, merely two years later, Nad is back with a new album, entitled “The Bride Said No”, that continues the fascinating plot, albeit with a far more extravagant musical palette. “I didn’t originally have the idea of going on with this story on the new album. But what happened was that I revisited a song called ‘The Bride Said No’, which I began to write in 1989. I kept a few of the early ideas I had for the verses and also that title, but the rest of the song is brand new. However, the title itself got me thinking that it made sense if this were used in relation to the Vampirate character from ‘Courting the Widow’. And the whole thing developed from there.” 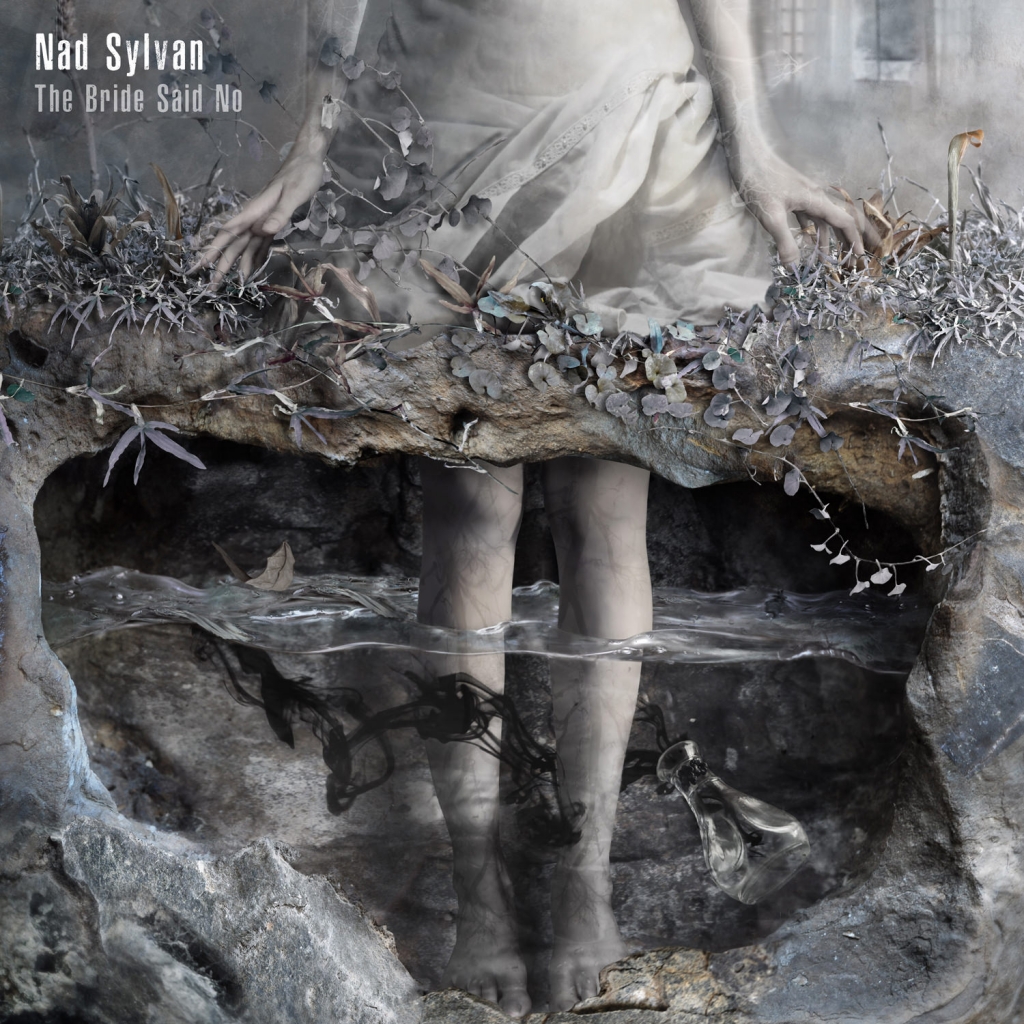 “The Bride Said No” Album Cover

My ritual of approaching a new album always commences by analyzing the cover, and trying to pinpoint how the nature of the music is depicted in the artwork. Being a photographer, I couldn’t prevent myself from being swiftly attracted by the gloomy, melancholic yet powerful graphical composition in the front of the CD. I’d describe it as “inviting”, and the word itself made me think about the myth after which vampires cannot enter private human homes unless they are invited in by the owner of the house. The initial minute unfolds with the short and atmospheric overture piece “Bridesmaids”, a haunting keyboard harmony adorned with backing vocals from Jade Ell and Sheona Urguhart, a melody which is used as a recurring theme throughout the record. It segues right into “The Quartermaster”, a catchy tune which starts off with a chunky bass line and a tasty vintage prog-styled keyboards taking over, to later give way to a string section and a heavier guitar riffs blended with energetic drums and Nad’s own memorable vocals, a combination infusing great spirit and liveliness to the music. The captivating song has a definitive 80’s feel to my ears, some sort of an intentionally sprinkled pop-oriented influence.

Next up is “When the Music Dies” a song where Nad pays tribute to all the great musicians we lost in the last year. A slow-building track with some electronic-accented vocals, it oozes elegance and sheer melancholy accentuated by the celestial choruses, heavy-pattern drums, and some superb distorted Chapman Stick courtesy of the one and only Tony Levin. “The White Crown” takes the “Vampirate” story for a wild ride, adding a symphonic and theatrical element to the music, one that easily borders with Broadway. Folksy choruses in the best Jethro Tull vein give an extra touch to the flamboyant composition, the kind of song you can close your eyes to and see it performed as part of a play on stage.

Nad has surrounded himself once again by a myriad of exceptionally gifted guests: along with aforementioned bass legend Tony Levin, we have drummer extraordinaire Nick D’Virgilio, his old partner in crime Roine Stolt and the bassist on almost 80% of the prog-rock albums nowadays Jonas Reingold. However, none of the contributions shine more than the ones present in “What Have You Done”, my personal favorite track, and arguably one of the most powerful songs Nad has ever composed. The melancholic tune could be defined as a ballad and opens with gentle and lovely piano wrapping Nad’s subtle and concise vocals (and backing vocals from Jade and Sheona) and the tempo builds-up slowly and pompously to pave the way for what’s coming: an otherworldly tandem of exquisite, emotional and flowing guitar solos first by Steve Hackett and then Guthrie Govan, from the middle of the song all the way to its epic finale, a combination which kicks the composition to a new dimension and for sure will astound the listener. I don’t think any prog-fan needs to be re-assured about Hackett’s abilities to paint landscapes with his instrument, and when it comes to Govan, if you are reading this and you are familiar with his guitar solos for Steven Wilson’s songs “Drive Home” and “Regret # 9” you know what I am talking about. When the song ends, you sincerely wish it had continued for another 10 minutes. Definitely Nad’s albums could use more guitarwork like the one present in this excellent track. Not to be outdone, Tony Levin and Doane Perry contribute outstanding bass and drums for this track as well.

A huge violin-led harmony sets the mood for “Crime of Passion (The Vampirate’s Anthem)”, a powerful and rocking grooving song co-produced with the collaboration of noted Swedish writer and producer Anders Wollbeck. Musically and lyrically, it continues with the fascinating vampire-esque plot, adding symphonic touches to the album extravagant musical palette. The pace suddenly changes with “A French Kiss in An Italian Café”, a more mellow slow-tempo song, constructed over an ethereal atmosphere provided by the combination of synth and vocals. Splendid guitars from Steve Hackett and Nad accompany the vocals along with Tony Levin’s distinctively expressive bass lines, and a beautiful saxophone solo from Sheona Urquhart brings the track to its end.

The record closes with the title track “The Bride Said No” a 20 minutes long composition which is actually a 12 and a half minutes’ song followed by two minutes of silence and them a 7 minutes long hidden track named “Black Sheep”. A much calmer tune at the beginning, notable for the vocal interplay of the two main characters while they argument over their eventual fate, with Nad’s opposition carried out by guest female vocalist Tania Doko, who’s lower vocal register fits as the perfect counterpart. There’s a mashup of peculiar bass grooves, abrupt keyboards madness, gentle rhythms and funk-influenced violin melodies spread all over the track, with sudden breaks in the right spots to highlight the vocal delivery, while the underlying 80’s pop-era flavor is again palpable: the perfect juxtaposition of all the sounds and influences you can hear throughout the eight tracks. If you buy the CD and are patient enough to wait (not sure exactly how that will be contemplated in the vinyl version), around the 14:22 minute mark the music comes back to life again with “Black Sheep” another catchy track with folky overtones, another blatant poppish flair and a great chorus.

Essentially “The Bride Said No” is to my ears a far more enjoyable album than its predecessor, while at the same time it serves as the thematical continuation started with “Courting the Widow”. It sees Nad Sylvan exploring a broader universe of sounds while staying rooted into the progressive rock realms, reaching out into far more elaborate and varied territory, full of soulful ideas and exuding a new creative sensibility. He has set out to take things even further than before and he has succeeded. Highly recommended.

“The Bride Said No” CD tracklisting: