With a theatrical reputation that often precedes their musical accomplishments, Mushroomhead has consistently balanced an impressive cast of eight or more musicians while pursuing a range of stylistic identifications. Maintaining an image that has been piloted largely by influences from horror and the gothic, the band has been labelled with titles that vary from alternative to industrial metal, growing and changing how they approach heavy music since their formation in 1993. The 2010s proved to be a relatively quiet decade for the band, releasing “Beautiful Stories for Ugly Children” in 2010 and “The Righteous & The Butterfly” in 2014 alongside a number of lineup changes. In 2020 the band is stepping out from almost six years of silence for a new full-length album, “A Wonderful Life” marking the eighth studio album for the band and a warm welcome as three new faces join their permanent lineup.

For a band so focused on their image beyond sound alone, “A Wonderful Life” is fitting in its absolutely enormous size and sonic scope. As they emerge from an impressive hibernation, Mushroomhead has produced a 17-song opus including four bonus tracks, clocking in at almost 75 minutes long. Including songs that range from haunting choral numbers through an onslaught of harsh vocals layered between razor-sharp rap verses, there was clearly no direction off-limits for the ambitious musicians that joined Mushroomhead’s ranks. While founding member and mastermind Steve “Skinny” Felton has piloted the band for almost three decades, it’s transparent that influences from each of the band’s present contributors have made their way into “A Wonderful Life.” Newest member and third vocalist Ms. Jackie offers a sweeter and more mellowed touch of female vocals throughout the album, and choral segments give an otherwise straightforward heavy metal band a cinematic touch. Balancing these lighter breaths of fresh air are unmistakable headbangers including “The Time Has Come” to keep “A Wonderful Life” from ever falling too quiet.

Three vocalists and two members balancing drums and percussion give Mushroomhead tremendous depth and dimension in certain tracks, but the potential seems somewhat lost in an album that focuses on a rather monotonous execution of modern metal. Considering the limited variety that “A Wonderful Life” provides, there’s no denying that taking on this album in full is a monumental commitment of time and energy. The progression of tracks seems to be haphazard, with heavier and more anthemic tracks front-loaded in the album’s former half while the latter is dominated by slower and more cinematic cuts. It also seems to reflect the band’s slow movement towards a more mature sound, with “Seen It All” demonstrating a more classic approach to alternative metal closer to the band’s history, while “Where The End Begins” ties together progressive elements in the album’s longest number. This particular track demonstrates the potential for the band to layer instruments alongside vocals in a manner that never becomes oppressive or drowns out the finer melodies that give the song its identity. “Where the End Begins” sees a vocal duet atop gradually mounting keyboards and gently introduced percussion to create an immersive atmosphere while a litany of sound effects tell its story, complexity that the rest of the album is rarely afforded. 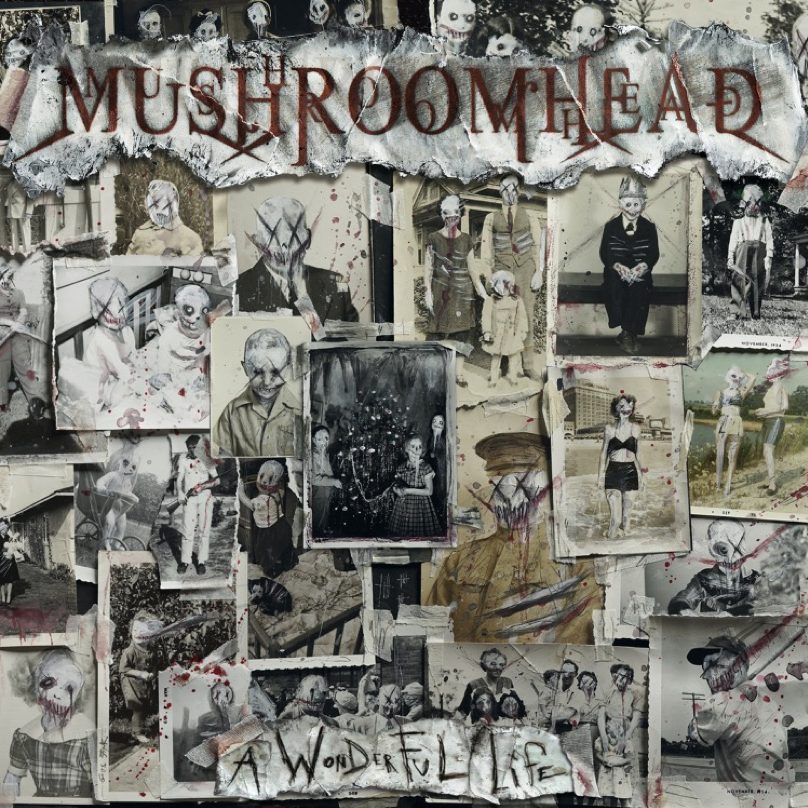 Unfortunately, the nuance displayed in this track is scarcely seen throughout the rest of “A Wonderful Life,” as “Carry On” cuts indiscriminately with its verses among a sea of distant chugging, the mix dimming the strength of both the guitar and bass. Following track “The Time Has Come” opens with a careful balance of keyboards and vocals, but little transition was provided to smooth the movement between what seemed to be a heavy-hitting crowd pleaser and the atmospheric introduction to a more sinister side of “A Wonderful Life.” Mushroomhead demonstrates their potential as a live-audience stunner in “I Am the One,” with an almost claustrophobic intensity that builds in anger and increases its tempo in stunning time before a chaotic release. In a later bonus track, “Another Ghost” and “Lacrimosa” embrace melancholy without shame, stepping away from the directionless fury that governed so much of the album’s early energy.

In a mammoth album that seems to be a case of colliding personalities, “A Wonderful Life” bears the costs and benefits of eight musicians driven by common purpose. Dark synthesizers sweep alongside orchestral might with a clear sense of purpose, but clashes with outright heavy tracks designed to embrace elements of nu metal and industrial. Such a case of fractured identity has made a magnificent project drag its heels with a feeling of disjointed unity and what can only be identified as filler material. Undoubtedly this album is a mature work of art, and it is one that springs from experienced musicians who have sought to carve out their niche, as the ebb and flow within each song is impeccable in delivering its message. At the end of the day, it seems Mushroomhead may have bitten off more than they could chew and failed to parse down the final product in favor of a lighter, more easily digestible statement. For Mushroomhead fans “A Wonderful Life” certainly remains a welcome return, but its length warrants a considerable investment of time and energy for new and returning listeners alike.

A massive album with seemingly boundless ambition, “A Wonderful Life” is a bold return from silence for Mushroomhead and an opportunity to show off the talents of an updated lineup.