Symphony X has a nasty habit of taking an awfully long time to put out their next record. For the ravenous fan, the wait can be frustrating. One even has to wonder what kind of impact the long waits between releases have had on the band’s momentum and ability to break through to the next level of commercial success. The bad news for those eagerly awaiting a follow up to 2015’s remarkably balanced “Underworld,” is that there is no apparent end in sight. The really good news, however, is that Michael Romeo, who for all intents and purposes is the creative visionary and musical master behind Symphony X, has not been idle.

And while his first official solo record, “War of the World Pt. 1,” has enough different elements and flashes of diversity in it that it clearly can’t be called a Symphony X release, it still retains enough familiar writing, riffing, soaring solos and orchestral aspects that it should more than satiate the fan base waiting for another Symphony X release, and possibly pick up a few stragglers along the way.

On Romeo’s new solo record, there is no Russell Allen to be found. That alone makes this something different. Vocals instead are provided by Rick Castellano, who brings a different twist that trades the dominant presence of Allen’s voice for something perhaps subtler and nuanced that turns a bit more spotlight on the song over the performance. Castellano still displays range, power and harmony very effectively, so while his presence makes this recording less Symphony X-like, it does not automatically make this project somehow inferior. Voices are unique and at times very polarizing, but Castellano brings something unique and very well executed to this record. I’m not left wishing it was Allen singing instead, which could easily have been a pitfall in this release. Drummer John Macaluso – the man handling the drumming department – adds another touch of power and finesse. A somewhat underrated drummer, he possesses a particular way of playing, where he combines power with texture and originality.

As one might expect on a guitar player’s solo release, Michael Romeo’s playing is at the forefront and featured prominently with the familiar runs, solos and riffs that define his sound. He’s a monster player and there are moments, like in nearly every Symphony X record, where you just sort of shake your head at how cool the thing you just heard was. But this record really showcases his compositional and arranging skills, as well as his mastery of merging the orchestral with the metal.

It’s not a new concept to add classical musicians contributions to heavy guitar compositions, but most of the time, the disappointing result is you end with an inferior, neutered version of the heavy original. This is where Romeo truly stands out on this release. He has the ability to merge horns, strings, and tympani with distorted electric guitar to create grand scale soundscapes that never go cheesy and never lose their balls. At times, the music turns on a movie projector in the mind and you can almost see characters engaged in battle, or a space ship racing across a desert planet. There are sci-fi themes and epic storytelling sections that sound worthy of the big screen and suggest that Romeo is truly ready to score film at the blockbuster level. The orchestral elements sound grand and authentic. There are no weak Casio keyboard patches. No poorly sampled strings. And unlike some of the earlier Symphony X songs, the classical element here never sounds cliché or dated. 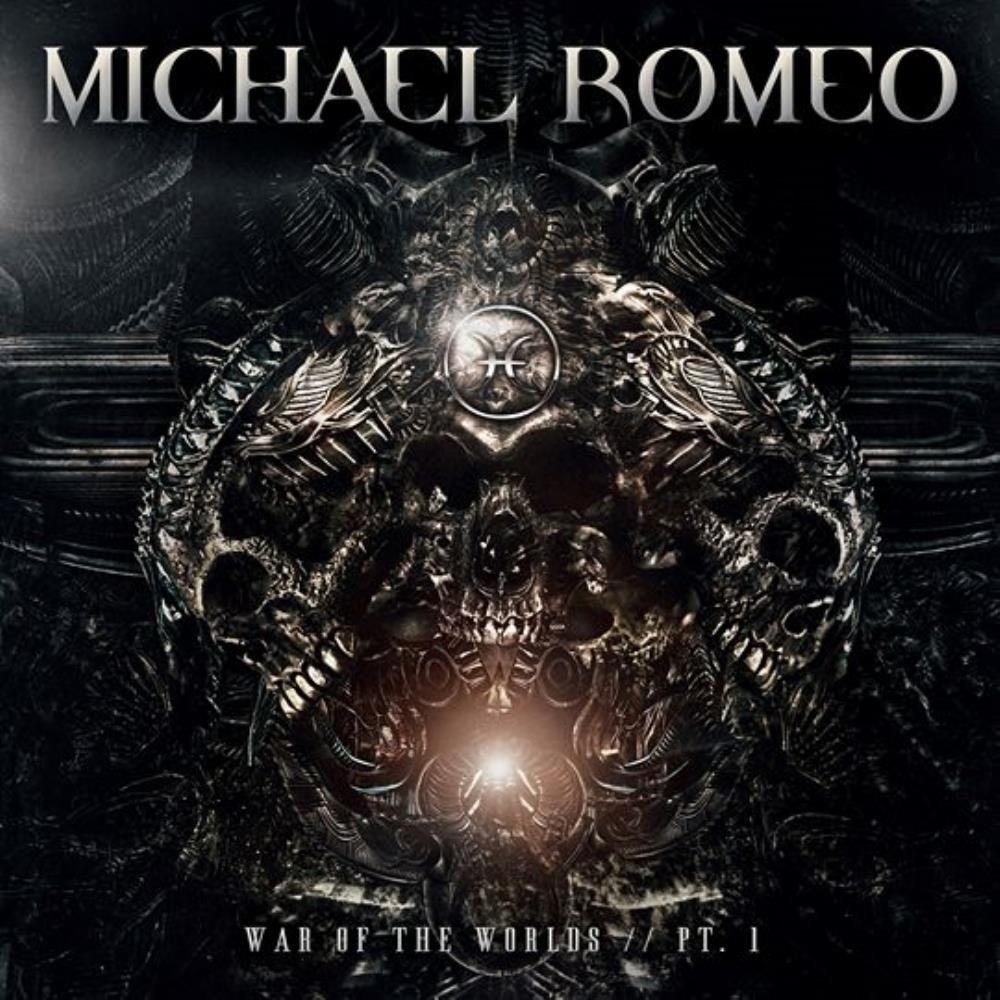 After an instrumental, soundtrack-like opening with “Introduction,” Romeo tears open “Fear the Unknown” with his typical fast, clean riffing. Castellano’s vocals layer and build in the chorus to add a touch of class and contrast to the reckless shredding solo and chunky rhythm riffing one would expect on a Symphony X release. “Black” also features signature playing from Romeo, along with dramatic orchestral elements that build tension and precision, only to make way for another soaring and absurdly fast guitar solo that matches dexterity with melodic sense.

In addition to giving the cinematic, classical aspect more of a front seat on this release, Romeo also introduces something new on track four, “F*king Robots.” Listeners certainly can’t claim to have heard this before on a Symphony X tune, with its distorted digital mashup that sounds like something from a Skrillex track. A musical monster battles with an edgy guitar, and both are occasionally interrupted by a short, catchy progression of lines that can’t be called a chorus because there’s no sung verses to counter in the song. It’s odd and quirky. But it works. And it sticks in your head long after the song is over.

“Djinn” introduces some dark, Arabic influences and foreboding choir punches to the cinematic center section that is both exotic and authentic. “Believe” is an epic feeling track reminiscent to some of the grandeur touched on songs like “The Accolade I & 2” and “Paradise Lost,” with delicate piano dynamics contrasted by buzzing power riffs, and very melodic verses and chorus. The orchestral section is almost Disney-like, but that speaks more to scope and quality than commercialism. Once again, the instrumental center section flips on the mind’s imagination of film visuals that would pair perfectly with the sonic soundtrack.

“Differences” is a bit more direct and condensed, but also features a very memorable chorus strongly delivered by Castellano. “War Machine” is an orchestral/electric instrumental full of dynamic rises and falls that only adds to the diversity and competency of the record. “Oblivion” is a chunky, heavy song that could slot in easily on a Symphony X album, but the closer, “Constellations” is a complex, orchestral heavy tune that showcases Romeo’s metal orchestral abilities and revisits some familiar themes to bookend the record in a satisfying manner.

“War of the Worlds Part 1” does not sound like Ayreon, Nightwish or any symphonic metal act. While it certainly most closely resembles Romeo‘s main band in some aspects, there’s enough uniqueness here that Michael makes a distinct and undeniable statement of his mammoth talent as both a composer and performer that far exceeds the stereotypical metal mentality.

If there is one criticism to be leveled at the “War of the Worlds Part 1” , it might be the sonority of the drums in the final mix. As we mentioned earlier, Macaluso does a mighty job pounding the skins, so definitely his proven musicianship skills are not in question here. It’s not clear for me whether that was a production or final mix decision, but definitely the way the surface through the mix might raise some eyebrows. That’s searching for something to nitpick about, though.

Listening to this record makes me crave more. According to our recently published interview, Michael has Part 2 nearly completed. So unlike with Symphony X, we may not have to wait an eternity to get another helping of Romeo’s majestic offerings. As far as I’m concerned, it can’t arrive soon enough. This one is highly recommended!

A remarkable merging of metal and cinematic orchestration that is likely to appeal to Symphony X fans without being legitimately accused of blatant replication. Insane prowess on electric guitar, along with tasteful vocals and a strong sense of melody, all make this a very good and unique listen for those who appreciate the more complex heavy material.